In Photos | The Unfulfilled Promise of Telangana's Housing Schemes

With assembly elections right around the corner, the TRS and the Congress have locked horns on the housing issue in the state.

Despite the massive scale of the projects, just a few are occupied. Credit: Akash Gandikota and Janak Vootkuru

Hyderabad: Government housing is one of the central themes dominating campaigning in poll-bound Telangana. The Telangana Rashtra Samithi (TRS) government has promised, free of cost, two-bedroom houses to all poor people in the state and has said that it will build one lakh houses in Hyderabad and 1.62 lakh in rural areas of the state.

While chief minister K. Chandrasekhar Rao claims that his government has fulfilled all the promises that were made in the party’s previous election manifesto, not much progress has been made in the housing scheme. According to reports, just 572 houses are completed in Hyderabad, while work is progressing in another 10,000.

The TRS and the opposition, led by the Congress, have traded charges and counter-charges over the housing issue. 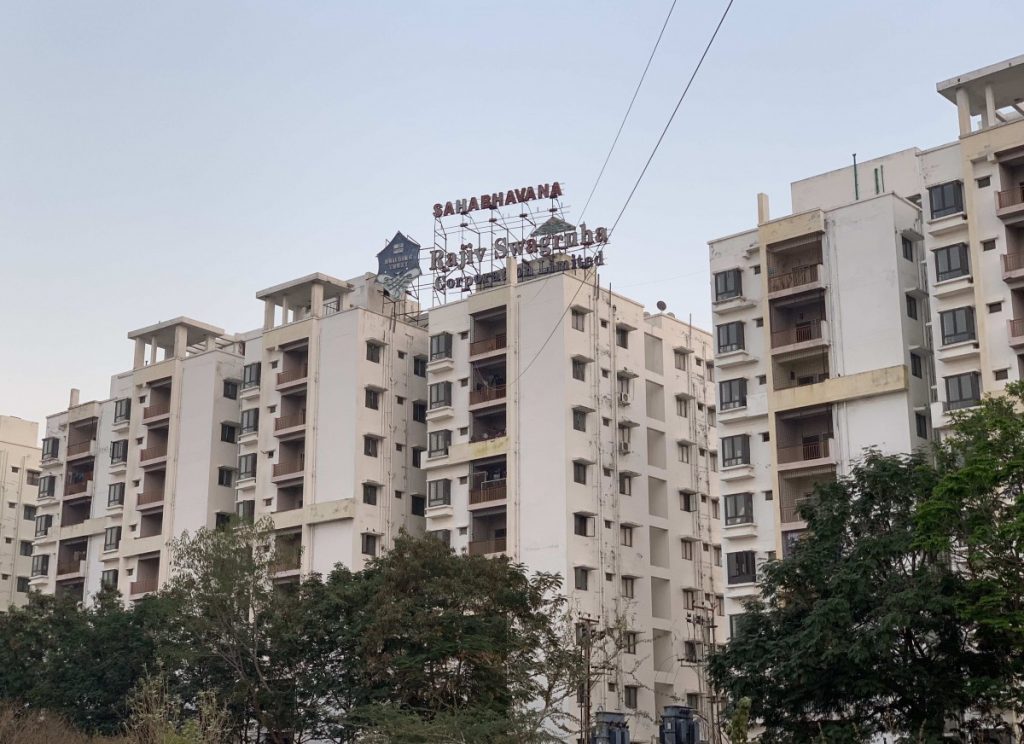 A massive project in Bandlaguda in Hyderabad envisioned the construction of 2,746 flats. The project was initiated in 2007 by the then Congress regime. Credit: Akash Gandikota and Janak Vootkuru

The failure of the TRS to make good on its housing promise is also the perfect opportunity to take a look back at the Rajiv Swagruha Scheme initiated by the Congress in 2007 in then undivided Andhra Pradesh. While the two-bedroom scheme aims to build over two-and-half lakh houses across the state, thousands of flats constructed under the Rajiv Swagruha project, though complete, lie unoccupied.

At this conjecture, it would be apt to ask if, like the construction of toilets in rural areas, the construction of houses is just a numbers game. Are government-constructed houses being sold and used? Or is the massive infrastructure expenditure a futile exercise? 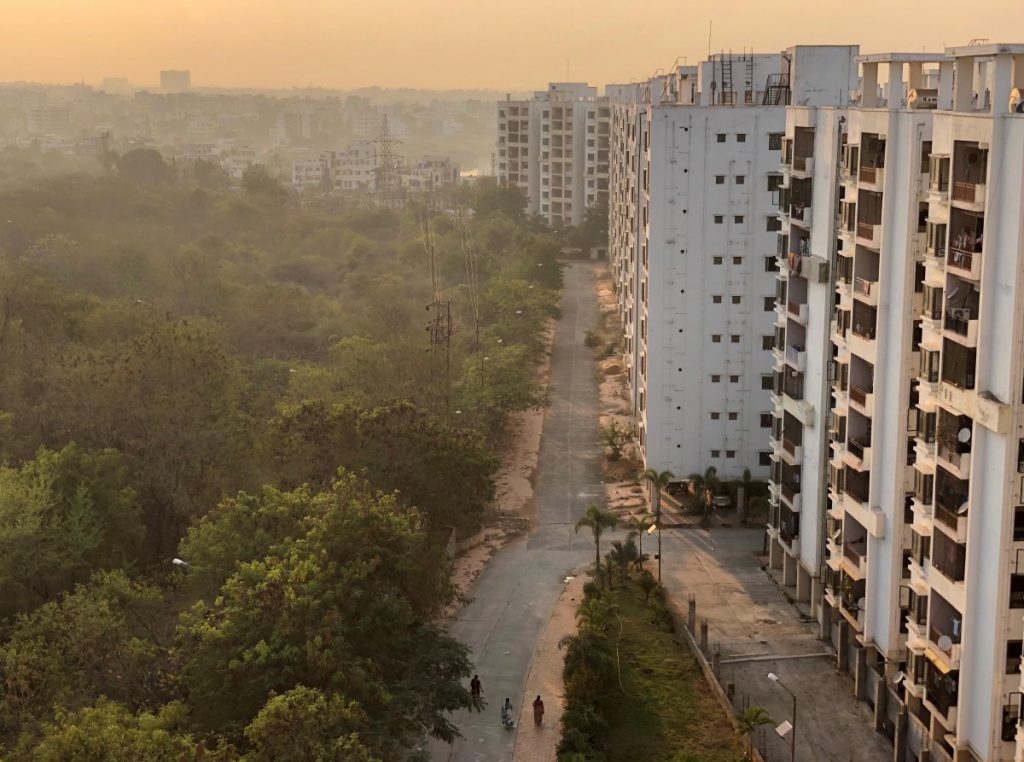 There are over 33 towers in the project and 2,716 flats. Credit: Akash Gandikota and Janak Vootkuru

A massive project in Bandlaguda in Hyderabad envisioned the construction of 2,746 flats. It has 1BHK, 2BHK, 2 ½BHK and 3BHK flats. However, the scheme was not met with the kind of popular enthusiasm as expected.

Though the project was initiated in 2007 under the Congress regime, only 502 flats have been sold, according to the latest available information. 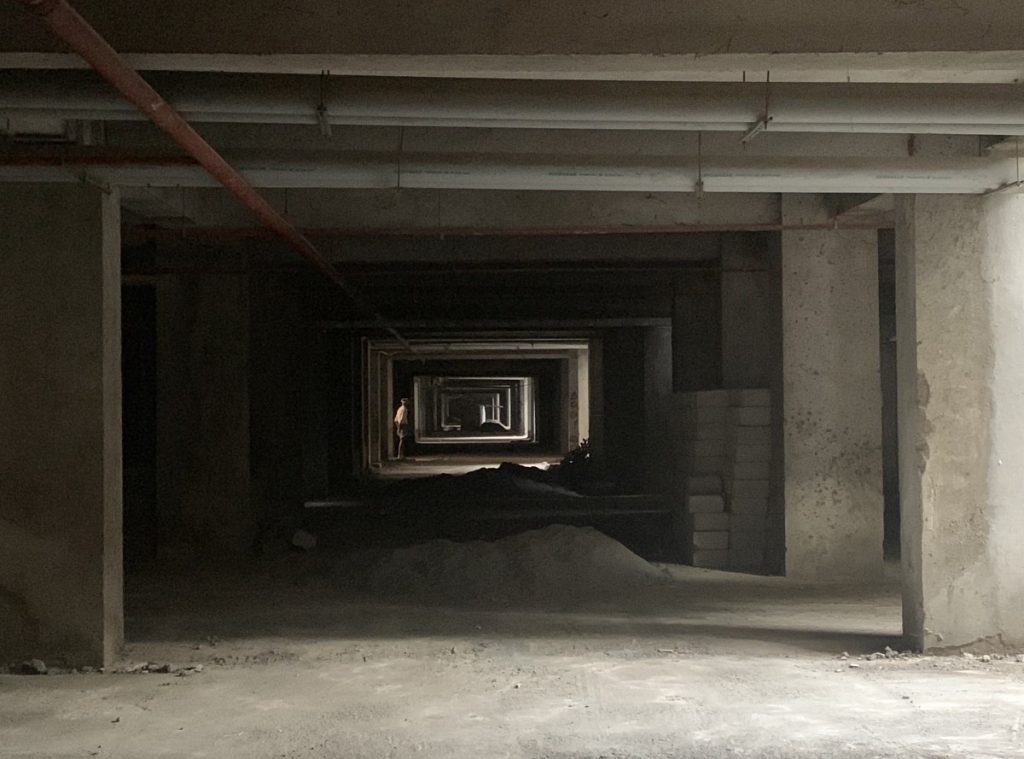 Some towers have yet to be constructed. Credit: Akash Gandikota and Janak Vootkuru

In fact, some of the 33 towers under the project are yet to be fully constructed. The government has put up over 2,200 flats for sale, of which 1,931 are “semi-finished”.

Several factors have contributed to the lacklustre response. When the project was initiated, it was located far from the city, a region which lacked infrastructure necessary for the project to take off the ground.

While the Hyderabad Metro Rail since has improved the region’s connectivity, many of the housing towers now wear a dilapidated look. 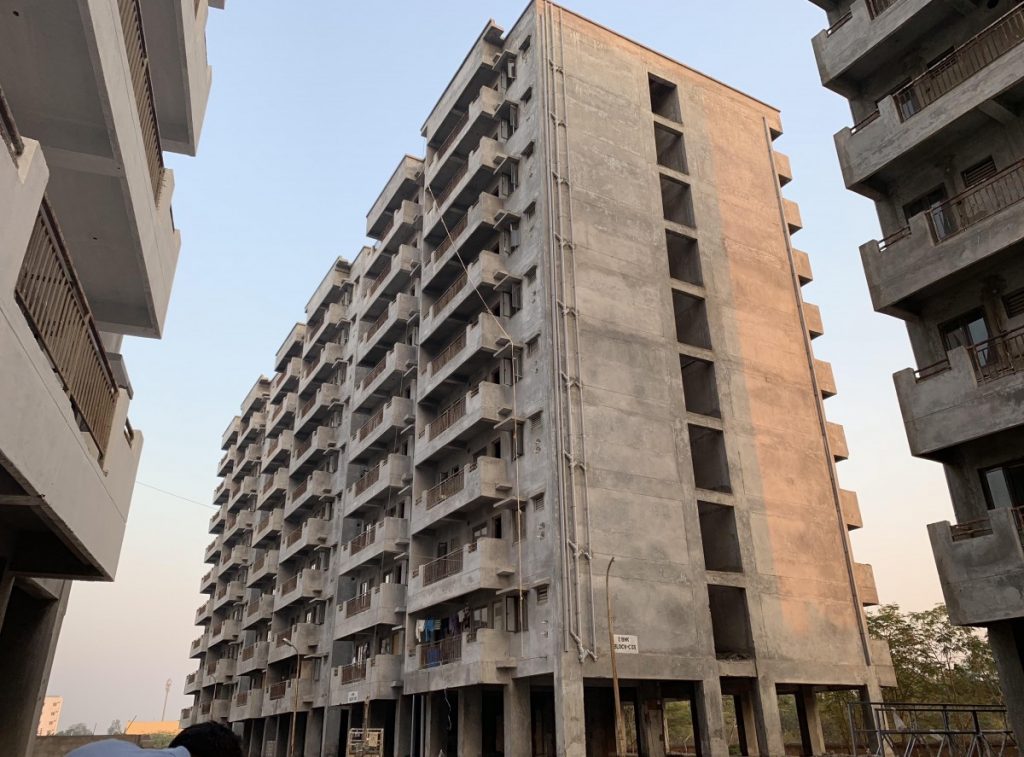 The real estate market slump since the early 2010s is also said to be one of the the reasons for the poor response. In 2016, the government auctioned 3,718  flats in two Rajiv Swagruha projects in Hyderabad. It received only 43 applications. Even among these, only one applicant quoted a price higher than the upset price of Rs 2,050 per square feet.

After all the efforts to attract public attention appeared to have failed, the government decided to sell the flats at a concessional rate to its employees. 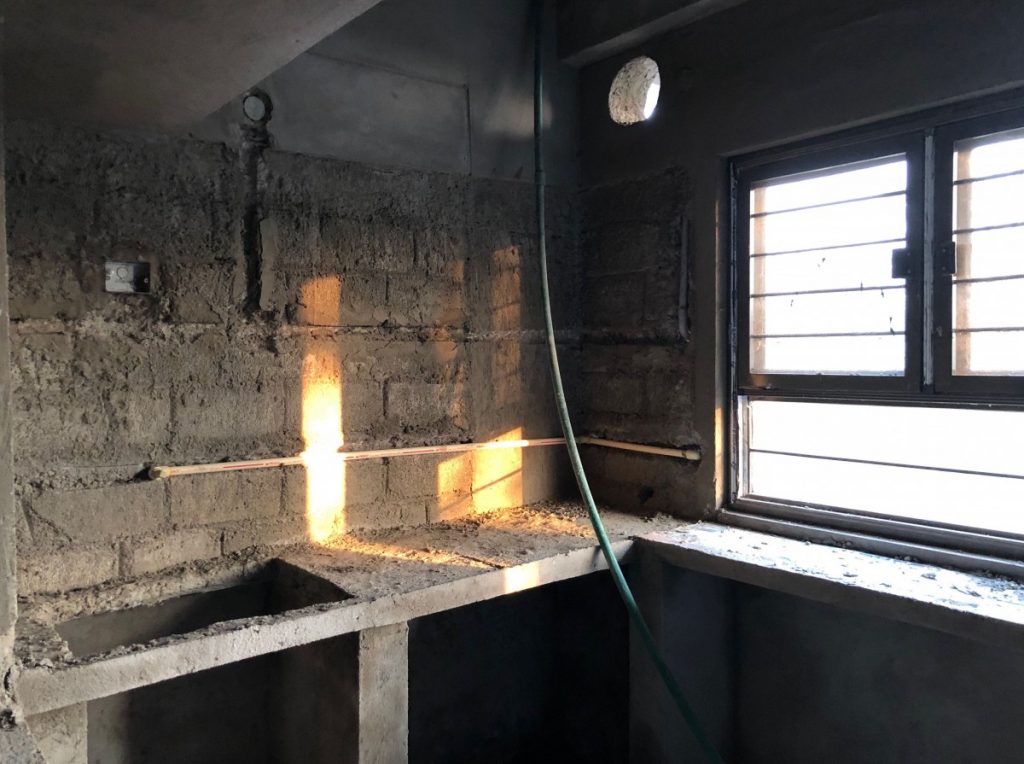 In July 2017, the government said the flats should first be offered to government employees. Those not sold could then be freed up for general public, it proposed. The concessional rates were fixed at R 1,900 for fully finished flats and Rs 1,700 for semi-finished ones.

However, government employees were not happy with the state of the project. “It’s nearly 10 years since the construction of these flats began. While some flats are ready, the others are semi-complete. Even in completed flats, buyers have to take up some renovation works as they are 10 years old. That is why we are seeking a price cut. The CM has promised flats to employees in recognition of their active participation in the statehood movement,” said Karem Ravinder Reddy, president, Telangana NGOs Association. 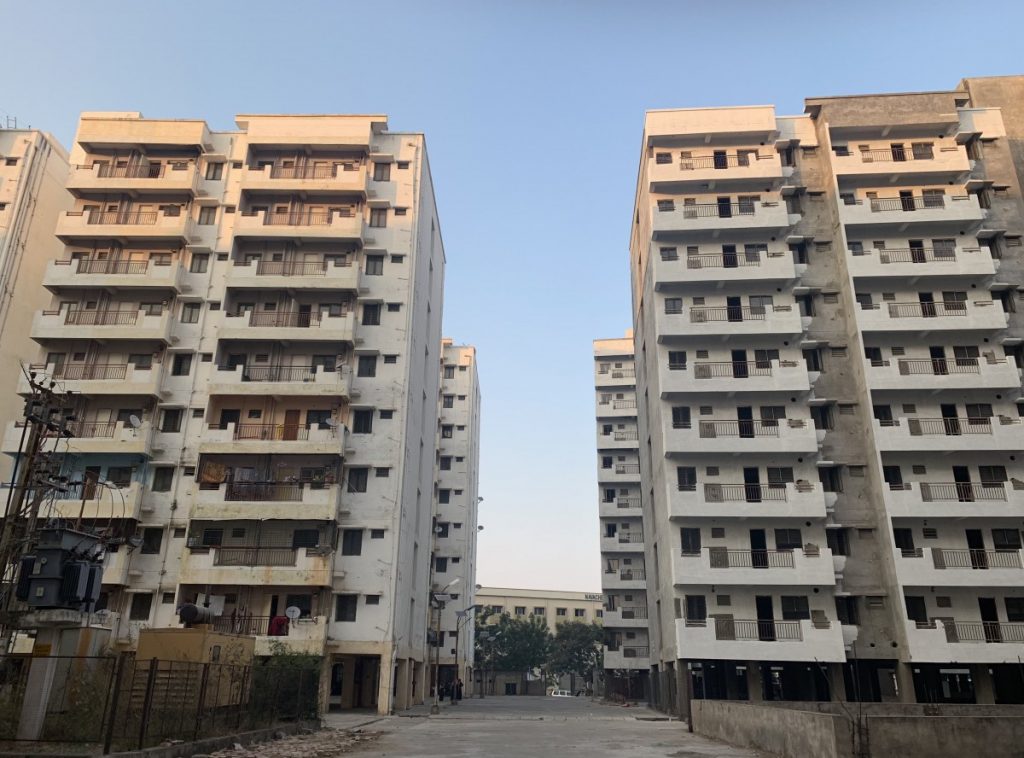 An occupied tower on the left and a “semi-finished” tower on the right. Credit: Akash Gandikota and Janak Vootkuru

While the exact cost of the project has not been revealed, it is estimated that the government spent Rs 500 crore on it. The Rajiv Swagruha Corporation owed nearly Rs 1,000 crore to banks and has managed to pay off Rs 820 crore. The sale of the flats in two projects was expected to raise around Rs 545 crore, generating a loss of Rs 531 crore.

The government has not said how many flats have been sold to government employees since the July 2017 decision. 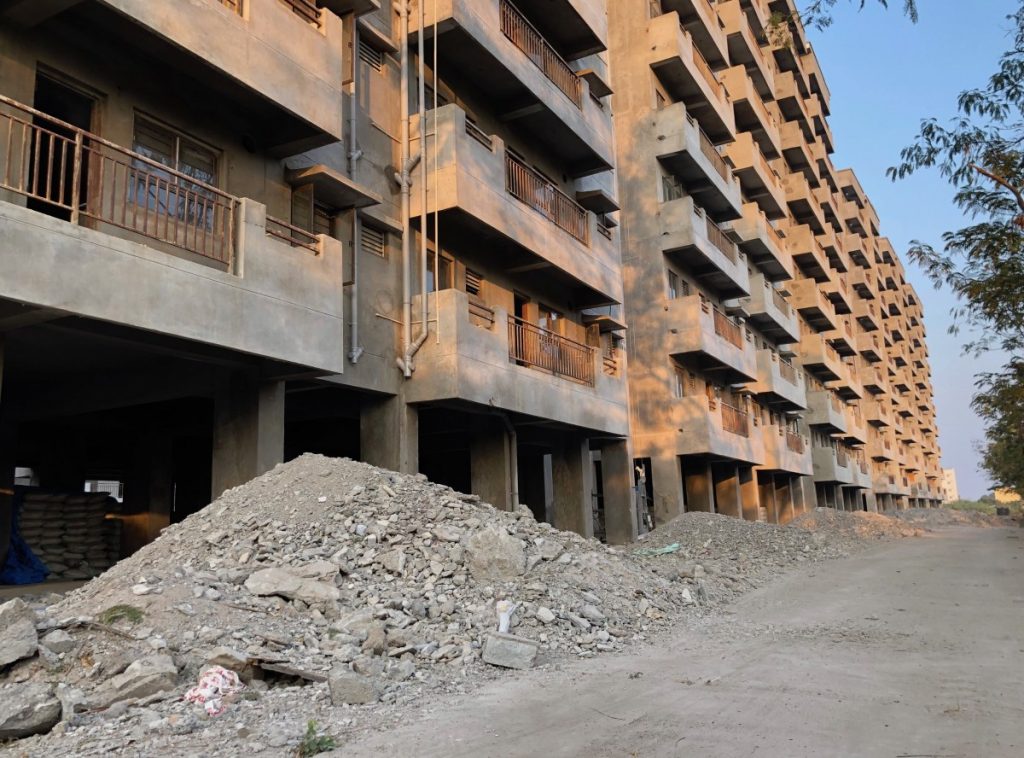 The government is expected to incur a loss of Rs 530 crore from the project. Credit: Akash Gandikota and Janak Vootkuru

All photos by Akash Gandikota and Janak Vootkuru. Text by Amrit B.L.S.