Animosity between leaders of the ISF and Congress was clearly visible at the rally. Kolkata: The Brigade Parade Ground in Kolkata has been witness to numerous historic rallies. On Sunday, a new chapter unfolded – the Left Front and the Indian National Congress held their first-ever joint public meeting here before the West Bengal assembly elections starting March 27. While the two parties have contested together before, they have not held rallies together.

However, the third party in the alliance – the Indian Secular Front (ISF), a party floated by an influential cleric of the prominent religious shrine Furfura Sharif, Abbas Siddiqui – emerged as a big mobiliser. The ISF is just 38 days old.

Most of Siddiqui’s supporters are young, in the age group of 18-27. And ISF supporters were the liveliest in the crowd.

Political meetings at Brigade Parade Grounds are always about a show of strength. This time, the alliance’s meeting had a thinner crowd compared to the Left Front’s 2019 rally during the Lok Sabha elections.

Speaking to a policeman on duty at the rally, The Wire learnt that the estimated crowd was somewhere between two lakh and 2.5 lakh people.

What the leaders said

Yechury attacked the ruling governments at both the state and the Centre, saying, “Humongous amount of money is being amassed by the BJP through electoral bonds. This is leading to sudabazi (business) in politics. Here in Bengal, the TMC [Trinamool Congress] has indulged in financial scams like Narada, Sarada. Both these evil forces will have to be defeated.” He further said, “Na loot-paat, na jaat-paat. Bengal ki maang, janhit ki sarkar (No need of government which loot, No need of government which divides on caste lines. Bengal wants a pro-people government).”

Bengal CPI(M) secretary Biman Bose said, “Today’s meeting is historic as Congress, ISF and other Left parties are here with us. Brigade Parade Ground has never seen such a rally. In this election, the BJP and Trinamool is one side, we all together are on the other.”

Leader of the Congress in the Lok Sabha and state president Adhir Ranjan Chowdhury launched a scathing attack against the TMC and BJP: “It is difficult to differentiate between Modi and Mamata. Both are stifling democracy. While Modi says Congress Mukt Bharat, Didi here says opposition less Bengal! Didi and Modi have the same political DNA.”

“Even though both Modi and Mamata have come to power by democratic means, both are now out to destroy democracy and establish an autocratic state. We shall restore democracy on coming to power. Today’s meeting has proven that evil powers like TMC and BJP will be defeated in the coming election,” he further said.

Chowdhury shared greetings with Congress and Left leaders present on the stage but ignored ISF dignitaries. Three and a half minutes into Chowdhury’s speech, Siddiqui walked onto the stage and the crowd erupt in cheering. The five-time congress MP from Baharampur had to stop his speech for a good few minutes as Siddiqui waved to the crowd and shook hands with leaders on stage.

Chowdhury then refused to speak and turned his back. Bose and veteran CPI(M) leader Mohammed Salim tried to quell Chowdhury’s anger. Later, the Congress leader spoke for another four minutes. 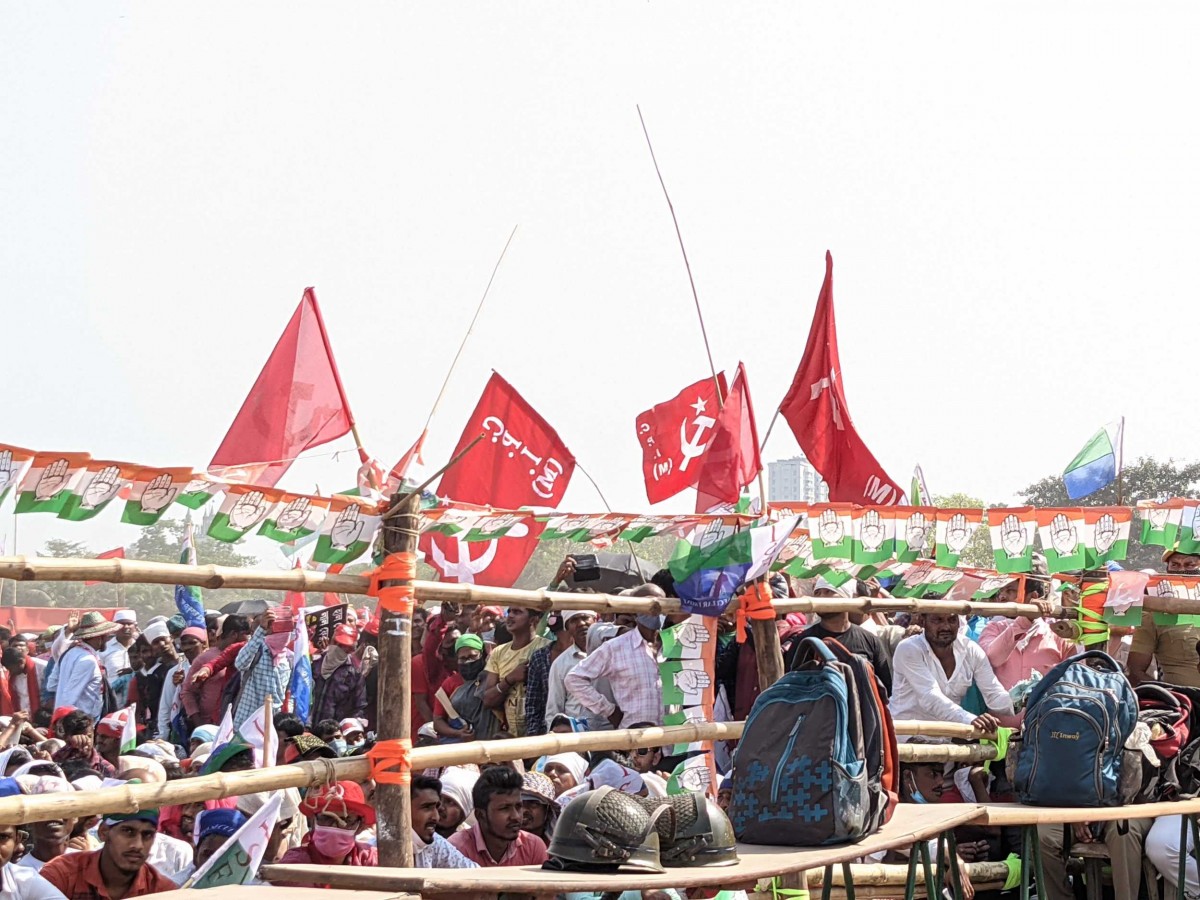 The next speaker was Siddiqui himself, popularly known as Bhaijan. Siddiqui greeted Salim Bose and the Left leadership but left out the Congress dignitaries present at the event.

“I asked all my supporters to vote for Left candidates and ensure their victory. Together, we will uproot the BJP government and their team member Mamata Banerjee from Bengal. Mamata snatched Bengal’s independence. She snatched women’s security in Bengal. We will give her a proper reply. Bengal always showed the power of resistance, we will break the black hands of BJP.”

He even attacked the Congress from the stage where Chowdhury along with many senior leaders – such as Chattisgarh chief minister Bhupesh Baghel and former Union minister, now in-charge of Bengal, Jitin Prasada were present. “We came here as partners, not to oil anyone.We have waited for long, won’t wait any longer. If anyone thinks friends should join hands, I promise I will fight for them. We are not here as beggars,” said the cleric.

A huge number of ISF supporters left the ground soon after Siddiqui finished his speech.

Speaking at the rally, Congress leader and Chattisgarh chief minister Baghel attacked the BJP and said, “Bengal is the land of Renaissance. This land has given birth to countless heroes who took part in the freedom struggle. BJP can never represent this glorious heritage of Bengal. Want to tell Modi ji, go read some history book. When Netaji Subhas Chandra Bose was building INA to fight the British, Savarkar and Syama Prasad Mookerjee were finding inductees for the British army.” 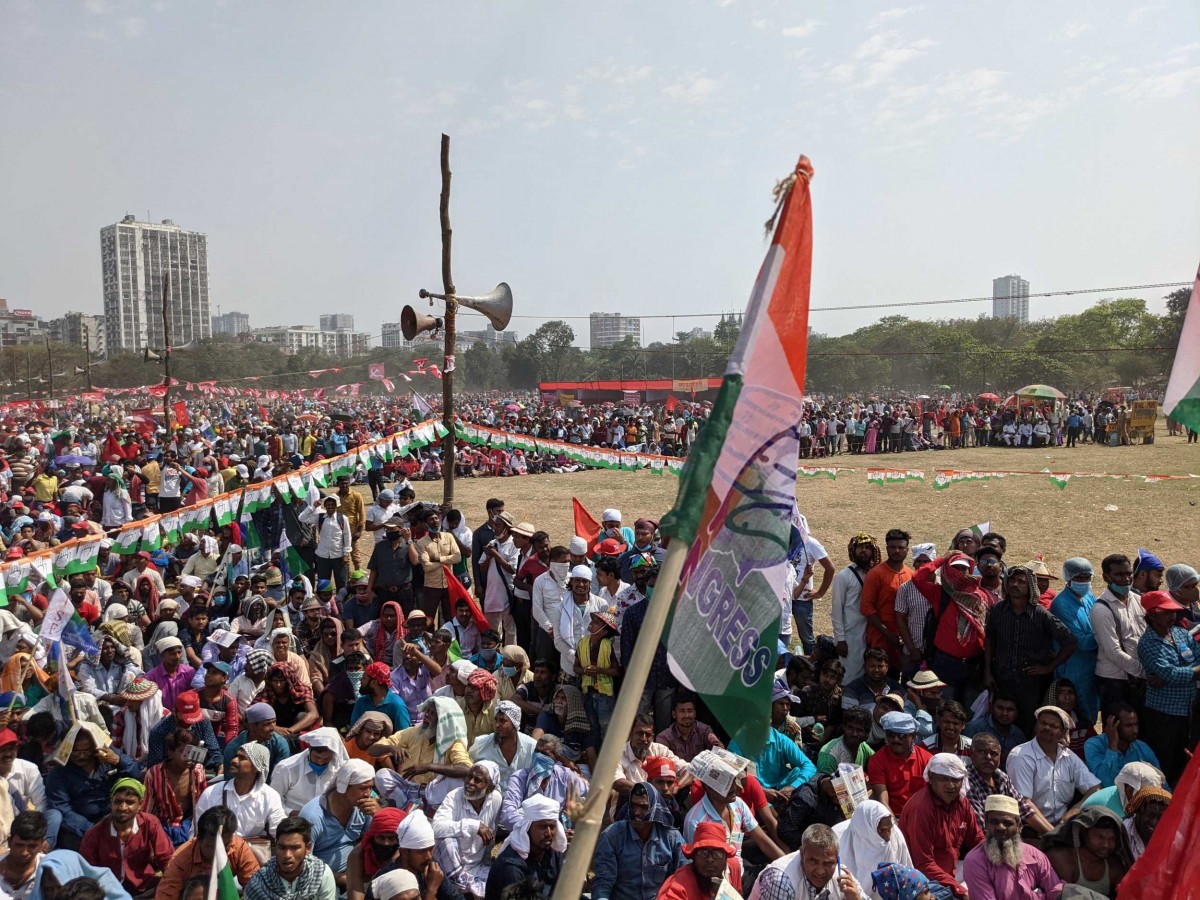 In his speech, CPI(M) leader Mohammed Salim lashed out against both Mamata Banerjee and Modi. “In the last 10 years, 250 of our comrades have been martyred. We shall avenge the sacrifice of all our martyrs. While our struggle is for industrialisation, the BJP is selling all the PSUs. The people of Bengal have stopped believing in the false promises of Mamata Banerjee. We are fighting for our rights. Alms thrown at us will not satisfy us,” Salim said.

What the common people said

Sixty-five-year-old Mohitosh Sen, travelling from Dum Dum, said, “All my life I voted for the CPI(M). This time too, I will vote for them. I hope there is a hung assembly so that the Left-Congress plays the role of kingmaker. Also I hope, this time, the Left vote doesn’t shift to the BJP.”

Siddharth Basu, 41, came to attend the rally from Durgapur and said, “In the 2019 Lok Sabha elections, our votes definitely went to the BJP. This time we will get those votes back as corrupt TMC leaders joined BJP, so they are looking for an alternative. So people feel better giving a vote to the Left alliance.”

Forging an alliance with Siddiqui’s ISF has created mixed reactions among people. Lower rank CPI(M) leaders are toeing the party line – that it will strengthen the alliance in the state. CPI(M) grassroots workers, though, are not happy and opined that the party shouldn’t have given Siddiqui space. Uttam Chatterjee, 54, questioned CPI(M)’s stance and said, “How can religious leaders be secular? The CPI(M) joining hands with Abbas is certainly negative for us, it would have been better if his wasn’t part of the alliance.”

Thirty-seven-year-old JamalUddin Mondal reached Brigade ground on Saturday night. He, along with 20 odd others, came from Lalgola in Murshidabad. Mondal said, “People are angry at the TMC. The Left-Congress vote that went to the BJP in the Lok Sabha is coming back to our fold. The Lok Sabha and Vidhan Sabha (state assembly) are not the same. This time those votes will come to our alliance.”

Bani Israil, 32, a practicing advocate in the Murshidabad district court said “People on the ground are furious with the price hike of petroleum products, this will have the maximum impact in this election. People now understand the BJP is fooling them. This election, the BJP will come in the third position. If the BJP can win 18 Lok Sabha seats going up from just two, our alliance can win 150 seats from 70 last time.”

Shahjahan Sarkar, from Mirzapur South Dinajpur, said “The alliance’s acceptability has still not reached the desired level. But we are trying our best. People are tired of the TMC and BJP, they are looking for an alternative. If the election is held properly we (the alliance) have a good chance to play the role of kingmaker.”

ISF supporter S.K. Jamal from Basirhat said, “We will vote for Bhaijan (Siddiqui) this time. Last time we voted for TMC.” When asked why he was voting for Bhaijan, Jamal said, “Because Bhaijan asked us to.”

CPI(M) party member Nakul Dev Das, 58, came from Chanditala in Hooghly, “This time the wind of change is blowing. If Mr Salim contests from our place, he will definitely win. Media is just focusing on BJP and TMC. Mark my words, the BJP will come last. People are little apprehensive as the Left joined hands with Abbas Siddiqui. We should have avoided it. But leadership has decided, so we will have to abide by it.”

The ISF and Left Front finalised their seat-sharing deal, with the Left giving away 30 seats to the ISF. Congress-ISF talks are still on, as there are some differences over a few seats in Malda and Murshidabad, which are historically Congress strongholds. But after Sunday’s fiasco between Siddiqui and Choudhury, it remains to be seen if the settlement happens at all.