Lawyers are protesting the government’s decision to divest powers of registration of immovable property in Jammu and Kashmir from the judiciary and transfer it to the revenue department. 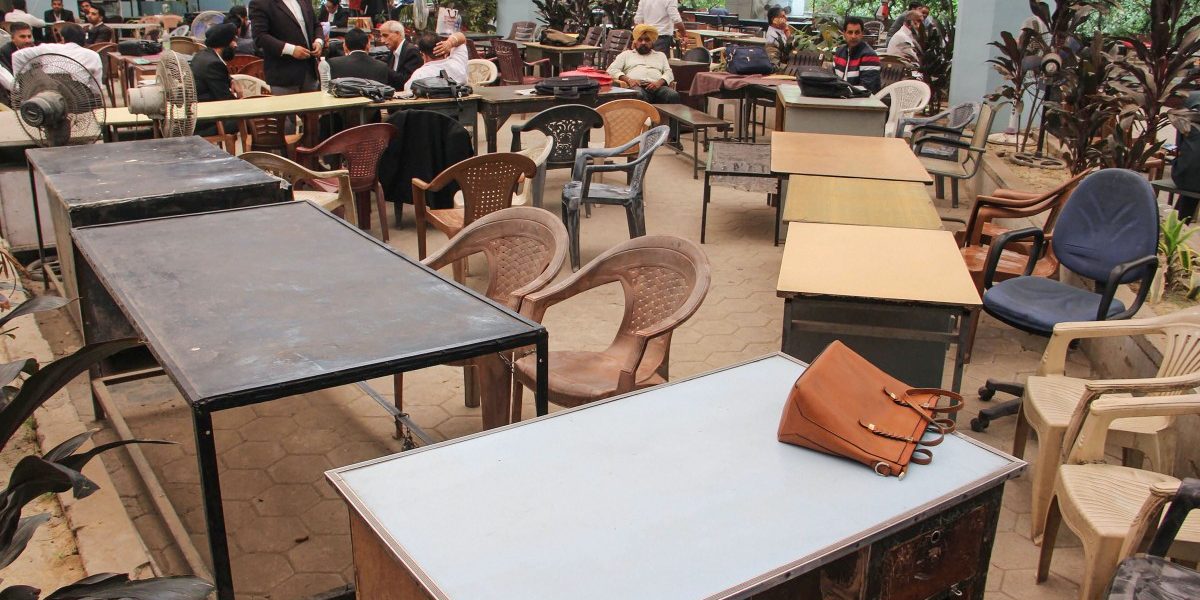 A view of advocates' chambers during the Bar Association strike in Jammu. Photo: PTI

Jammu: On November 1, the first day of Jammu and Kashmir as a union territory, lawyers went on an indefinite strike. Jammu Bar Association president Abhinav Sharma was heading the agitation. Sharma is a Bharatiya Janata Party spokesperson.

In a general house meeting, Sharma announced an indefinite strike by lawyers against the government’s decision to divest powers of registration of immovable property in Jammu and Kashmir from the judiciary and transfer it to the revenue department.

Lawyers had been agitating ever since the State Administrative Council (SAC) headed by the former governor of the erstwhile state of Jammu and Kashmir, Satya Pal Malik, sanctioned the creation of a new Department of Registration under the Registration Act, 1908 (Central Act) for registering documents pertaining to immovable property on October 22, 2019.

The new Department of Registration will function under the administrative control of the revenue department, as opposed to the prevalent system of registration in Jammu and Kashmir where the power of registration of immovable property was with the judiciary.

BJP state president Ravinder Raina wrote to Malik on October 27 saying that registration powers should continue to be with the judicial authorities instead of revenue authorities.

Congress spokesperson Ravinder Sharma also commented on the matter, saying, “This is like handing over the keys of the house to thieves. Revenue department officers are found involved in most land matters and as a lawyer myself, I stand with the lawyers when I say the power should remain with the judiciary.”

Also read: While Kashmir Is Silenced, Jammu and Ladakh Are Muttering Anxiously

Former sub-judge and member of the National Conference Muzaffar Khan also said, “Previously also, when the state government was going to give the powers to the revenue department, there was an agitation by the lawyers and then through a stay, powers remained with the judiciary. People have more faith in the judiciary and there is greater transparency.”

But while the BJP’s regional political unit, those in the opposition and those impacted by the decision all agree, a fresh government order was issued on October 31 assigning the charge of the registrar and sub-registrar for the Registration Act, 1908 (Central Act) to 80 officers of the revenue department. 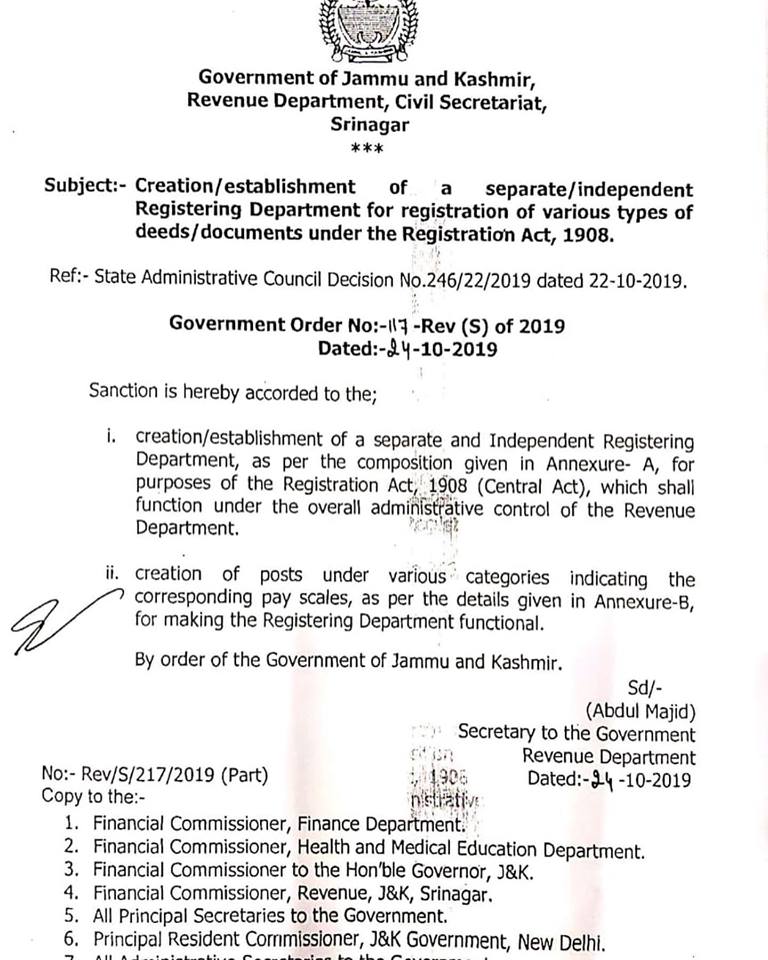 Following protests and lawyers suspending their work, Sharma convened a general house meeting of the Bar. With a full house, the call for an indefinite strike was given. The Jammu Province People Forum has shown solidarity with the Bar on this.

In Jammu and Kashmir, before the creation of a new department, registration of documents of immovable property was handled by the judiciary. Land registration was done under J&K Registration Act SVT 1977 (1920 AD) and the state government had appointed the chief justice of the J&K high court as inspector general of registrations. The principal district and sessions judges acted as district registrars, and were assisted by sub-registrars (sub-judges, munsiffs and judicial magistrates) at the district and tehsil levels. Overall administrative control lay with the state law department under the commissioner secretary, law.

According to the SAC order, additional deputy commissioners and sub-divisional magistrates/assistant commissioners revenue had to be appointed to exercise the powers of registrars and sub-registrars, respectively. SAC also approved the creation of 464 new posts under various categories. Therefore, following the SAC order, on October 31, when J&K became a UT, principal district and sessions judges stopped the registration of immovable property since now the Central Act became applicable and they no longer had any jurisdiction in the matter.

“Appointment will take some time, as is the case with recruitment in Jammu and Kashmir. Even if they do it in full speed, they cannot do it before six months. Until then, under the provision of Section 91 of the Reorganisation Act, the power will remain with the officers exercising the powers until then. Meaning thereby, judicial officers [will be in charge] until new officers can be appointed. Till now, there have been no appointments. I have conveyed this to the principal sessions judge as well, that you have stopped entertaining land registrations but that is illegal,” Sharma had said on October 31, following the confusion.

“Central Registration Act has become applicable in Jammu and Kashmir and under the Central Act, the state government has to delegate the powers of registration. SAC decided to give powers to the new registration department so judicial officers have no jurisdiction. How can they go ahead with registration? I have been informed by other lawyers that they have stopped,” said advocate H.C Jalmeria during the protests on October 31.

Addressing the apprehension of lawyers and civil society that SAC’s decision will increase corruption in the revenue department, Sharma had said in an interview, “Under the SAC order, the new department will be formed. Old sub-district magistrates or patwaris won’t be given charge.”

However, as per the fresh order, Pawan Kotwal, financial commissioner, revenue, was made inspector general of registration in addition to his own duties, till further notice. Similarly, 80 officers of the revenue department were given additional charge of land registration.

Pallavi Sareen is the editor-in-chief of Straight Line. She can be contacted at pallavisareen99@gmail.com.