Many panchayat seats are lying vacant and elected officials have been confined to hotels in Srinagar due to security concerns. A panch shows her finger marked with indelible ink after casting her vote during the BDC polls in Kashmir at a polling station in the Boniyar area of Uri on Thursday. Photo: Mudasir Ahmad

Srinagar: The government may have decided to hold block development council polls in Jammu and Kashmir, but the election euphoria was missing completely. The only visible sign of voting were the heavily guarded polling booths.

For the first time in its history, J&K witnessed elections for the constitution of block development councils (BDC) on Thursday. The electoral college for the polls comprised elected panches and sarpanches. According to the state election office, there was a 98% voter turnout.

While the turnout was high, reports said that most panchayat seats in the Valley are vacant and elected members have been confined to secure hotels, away from their villages.

The boycott made the election a direct contest between BJP and independents, most of them with little influence.

The election outcome has, however, left the right-wing party in “disbelief”, admitted a senior party member, particularly after it ran a campaign highlighting the reading down of Article 370 of the constitution as a “major achievement” to fully integrate J&K with India.

Also read: With the Pause of the BJP Juggernaut, a Lesson in Keeping Arrogance in Check

Independent candidates swept the polls across the state, winning 217 of 307 panchayat blocks in all three regions of Kashmir, Jammu and Ladakh.

The BJP couldn’t even cross the 100 mark, winning just 81 seats despite running a full-fledged campaign across the state for almost a month.

According to official figures, independents won 19 of 22 districts across J&K, while BJP secured a lead in only two districts. Jammu-based Panthers Party won in one district.

Independents win in the Valley

The BJP, which claimed to have made inroads in Kashmir after the panchayat and urban local body polls last year, won just 18 seats in the region.

The elections could not be held on the remaining seats, which are lying vacant owing to the non-election of candidates in last year’s panchayat polls.

The BJP did not win a single seat in five Kashmir districts – Kupwara, Bandipora, Ganderbal, Srinagar and Kulgam, as per the official figures. Independents won all 50 seats in these districts. 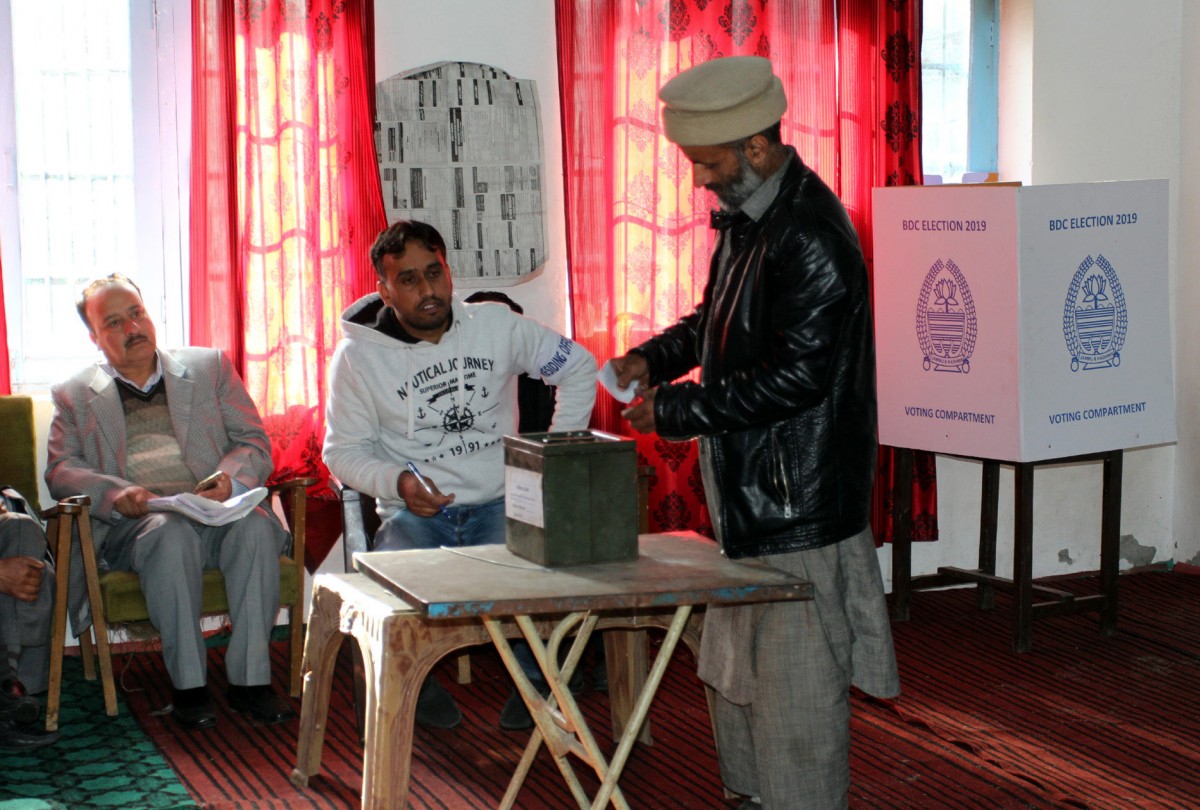 A voter during the BDC polls in Kashmir. Photo: Mudasir Ahmad

Both the BJP and independents won four seats each in Pulwama district, while one seat was secured by a candidate who fought the election on the Congress’s symbol despite the party having boycotted the exercise.

The only win for the BJP in Kashmir was Shopian, where it won all eight seats – six of them unopposed.

The BDC election was the first electoral exercise in J&K after New Delhi read down Article 370 of the constitution and bifurcated the state into two union territories – a move that stripped the state of its separate flag and constitution.

The elections were held at a time when Kashmir continues to be in grips of uncertainty.

The BJP was expecting a “much better” performance in Jammu, said the party leader. Since 2014, the party has consistently performed “better” in the polls held in the region. But that was not the case time around.

Of the 148 seats across the division, the party won just 52 segments, while independents bagged the highest number of 88 seats. The Panthers Party won the remaining eight seats.

Independents swept the polls in Poonch district, winning all 11 seats. The worry for the BJP will be its loss to independents in mainland Jammu – Kathua, Samba, Udhampur and Jammu districts. 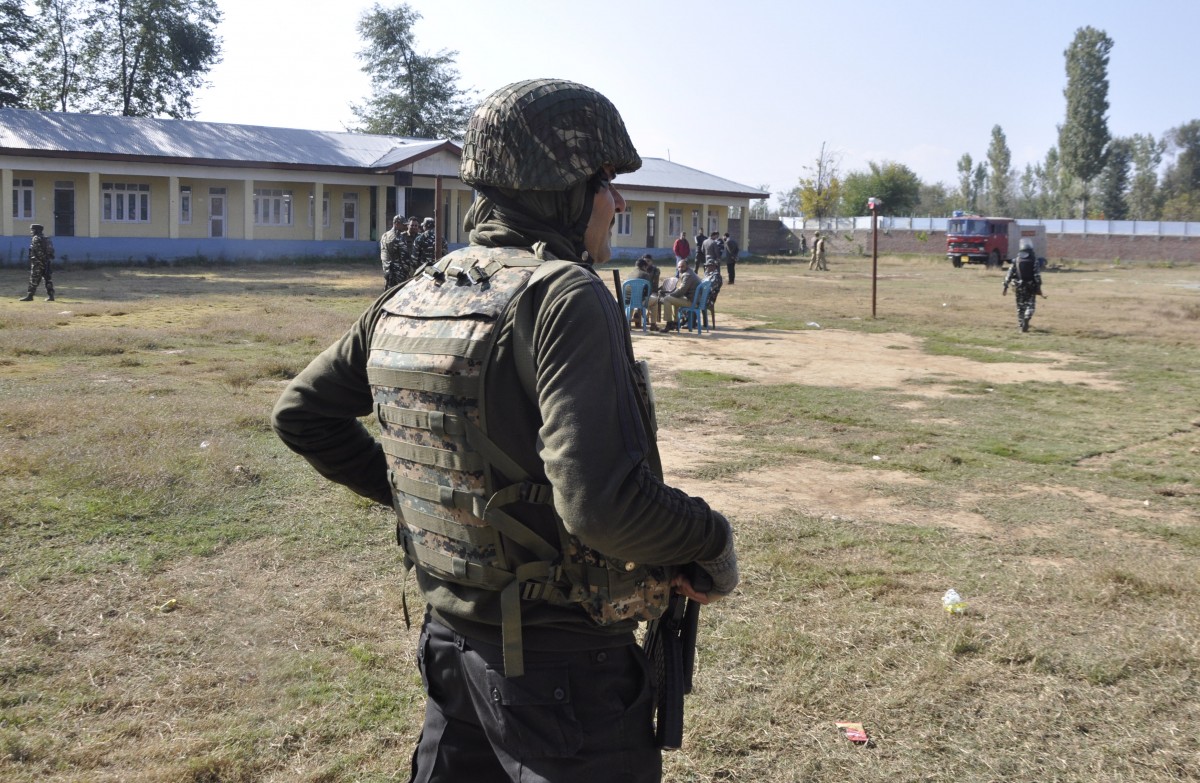 A security officer at a polling station in Baramulla on Thursday. Photo: Mudasir Ahmad

Ladakh too votes for independents

The BJP was hoping to perform better in Ladakh after the Centre accorded union territory status to the region spread over two districts. But the party’s hopes were dashed as it stood second in the cold desert as well.

BJP general secretary (organisation) Ashok Koul said the party will shortly hold a meeting to discuss the outcome. Koul said the BJP had supported 15 independent candidates in Kashmir, “most of whom won the election”.

According to reports, while the voter turnout was very high at 98.3%, many panchayat seats are lying vacant in the Valley. Due to security concerns, elected panches have been confined to hotels, far from their villages. Reports also point to public indifference towards the polls.

An Indian Express report said that 60% of panch seats are vacant as no candidate stood for elections in these wards during last year’s panchayat elections. “Of the elected 7,569 panches, over 3500 were elected unopposed,” it said. Even 34% of sarpanch seats are vacant and of the elected 1,558 sarpanches, over 550 were unopposed. The government didn’t even conduct re-election for the vacant wards, as is mandatory.

The newspaper also reported that fearing militant attacks and public reprisal, elected panches and sarpanches have been staying in secured hotels in Srinagar, away from their villages. Kashmiri pandits who have been elected live in Jammu, 250 km away, and visit the Valley only occasionally, the report says.

The government has hired at least seven hotels in Srinagar to house elected panches and sarpanches. Nisar Ahmad Bhat, a panch from Khigam village of Pulwama, told the Indian Express, “All these months, I have not spent a single night at my village. I have visited my village a few times only during the day and have not stayed there for more than a few hours.”