In Bihar, Kushwaha’s Dissent Against NDA May Tip the Scale in Favour of Opposition

With two clear camps in the state, much of the NDA’s prospects are dependent on the caste alignments that it manages to consolidate in a bipolar contest. 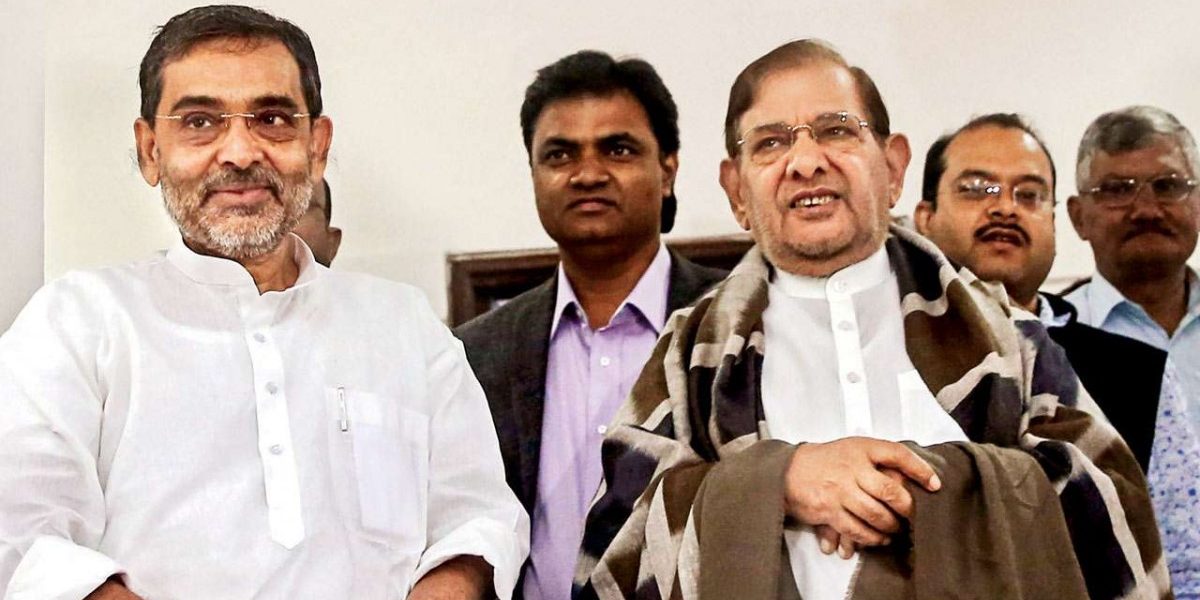 Upendra Kushwaha with Sharad Yadav at his home in New Delhi. Credit: PTI

New Delhi: As we inch closer to the 2019 general elections, the dissenting voices within the National Democratic Alliance (NDA) are only getting louder. After Shiv Sena and Raju Shetti-led Swabhimani Paksha in Maharashtra and Telugu Desam in Andhra Pradesh, Upendra Kushwaha’s Rashtriya Lok Samata Party (RLSP) is now looking to break ranks with the Bharatiya Janata Party-led NDA.

Kushwaha, who has generally been unhappy about the number of seats being offered to his party RLSP in Bihar, has yet again made his resentment clear to the BJP leadership. Two days ago, Kushwaha, also the Union minister of state for human resource development, met opposition leader and Janata Dal (United) renegade Sharad Yadav. Although he said it was a routine meeting with his “marg darshak” or mentor to discuss issues of social justice, it was anything but that.

The RLSP leader himself made his problems with the Bihar chief minister public. “Nitish Kumar has a habit of breaking parties. I do not know why he has come down to destroy Upendra Kushwaha and his party. But no matter what he does, he cannot harm me,” Kushwaha said, adding that he wanted to discuss the issues with BJP president Amit Shah.

Kushwaha’s dislike for Nitish was never a secret. Both leaders emerged from the socialist movement, garnering support from their respective caste groups. But Kushwaha later parted ways with Nitish launching the JD(U). Since then, they are known in Bihar as rivals. However, with both in the NDA now, their interests are clashing.

Also read: Bihar’s People Are the Ones Paying for Its Rudderless Government

Over the last year, he had been giving indications that he was unhappy with Nitish asserting his weight against his party in the NDA, but his public position against the Bihar chief minister came on the heels of reports that the JD(U)’s recently-appointed vice president Prashant Kishor was trying to poach the two legislators – Sudhanshu Shekhar and Lalan Paswan – the party has in Bihar.

“We are both in NDA and we are supposed to work together. I do not think Nitishji should do all of this,” Kushwaha reportedly said, seeking BJP’s intervention in the matter.

Kushwaha’s problems with NDA began when Nitish broke ranks with the Rashtriya Janata Dal and joined the NDA to form the state government in 2017. With Janata Dal (United) – one of the biggest parties in Bihar – as a part of the NDA, Kushwaha’s room for maneuvering within the alliance decreased considerably.

RLSP became a part of the NDA just ahead of the 2014 elections. Kushwaha had managed to secure four seats for his party, three of which it won amidst a Modi wave. The other NDA constituent, apart from BJP, in the 2014 general elections was the Ram Vilas Paswan’s Lok Janshakti Party (LJP), which contested seven out of the 40 Lok Sabha seats in Bihar and won six. The BJP, which contested 29 then, won 22.

2014’s was a triangular fight with JD(U) and RJD-Congress forming the other two fronts along with the NDA. This helped the saffron alliance win most seats.

With the NDA’s make-up in the state considerably changing for 2019 polls, the RLSP is now the smallest faction. With Nitish asserting his weight, BJP has already relented to JD(U)’s demand that both the parties will contest an equal number of seats, leaving little room for LJP and RLSP.

While RLSP, being the bigger party among the two, is still hoping that it will get a respectable number of seats in the NDA. Kushwaha has, however, made it clear that his party will not settle for anything less than four seats that it had secured in the last general elections.

There are reports that none of the bigger NDA constituents – the BJP, the JD(U) and the LJP – are willing to placate Kushwaha and may also let him go.

That the RLSP leader appears to have sensed this reflects in his statements. In August, hinting at a possible political realignment, Kushwaha had said that a delicious “kheer” (dessert made of milk and rice) can only be made when the milk comes from Yadavs – a majority of whom support the RJD – and rice from the Koeris, the caste group to which Kushwaha belongs.

Earlier, in June, he has also skipped a crucial NDA meeting.

If Kushwaha leaves the NDA, he may take away a substantial chunk of influential Koeri caste away from the alliance. The Dalit leader Jitan Ram Manjhi, who had joined the NDA before the state’s assembly polls in 2015, has already left the BJP-led alliance following differences with Nitish. His party, Hindustani Awam Morcha (Secular) is now a part of the RJD-led alliance in the state.

With two clear camps in Bihar, much of the NDA’s prospects are dependent on the caste alignments that it manages to consolidate in a bipolar contest. At the moment, however, it looks like the scales are lunging towards the opposition.