In conversation with The Wire, the leader said he was confident that the BJP wouldn’t be able to conquer the last Congress bastion in the northeast.

Aizawl: The longest-serving chief minister of Mizoram, Lal Thanhawla, is facing a tough re-election after a decade. Aside from the likelihood of anti-incumbency sentiment, there is an extra edge to the battle. The Bharatiya Janata Party (BJP)’s attempts at toppling his applecart by either poaching the winning MLA candidates of his party or trying to weaken his base among minority communities, are undoubtedly factors to consider.

While BJP president Amit Shah has addressed election rallies only in the state’s minority areas, party leader Himanta Biswa Sarma campaigned in the Chakma refugee camps in north Tripura. All in the hopes of pocketing the five minority-dominated seats in order to be a factor in government formation if neither of the two major contenders – the Congress and the Mizo National Front – manage to reach a simple majority after December 11.

In an interview with The Wire, Lal Thanhawla, the president of the state Pradesh Congress Committee – under whose leadership the party formed five governments in the northeastern state – downplayed the role of the BJP in the ensuing polls in Mizoram. He said he was confident that the saffron party wouldn’t be able to conquer the last Congress bastion in the northeast.

The veteran Mizo leader, however, added, “But the question is, how many candidates can they purchase to be a part of a government after the results are out, I don’t know”. Excerpts:

You are going to the people for a third consecutive term. What is the prospect of your party getting re-elected?  The opposition parties have told the media repeatedly that there is a strong anti-incumbency against your government.

One of the biggest election issues raised by the main opposition – the MNF – against your government is the decision to lift the ban on alcohol sale and consumption in the state in 2014. The Church seems to be angry about it too.

I imposed Prohibition in February 1997 only at the behest of the Church. But I can tell you today that it was a miserable failure because the Church never helped my government at all in making it a success. The ban on sale and consumption of alcohol didn’t help create an alcohol-free society. It only led to the creation of a thriving black market. Any foreign liquor that would cost Rs 300-400 elsewhere would be sold here for 1000-1500 rupees. It became a flourishing business.

Also read: ‘I Won’t Need the BJP to Form Government in Mizoram’: Zoramthanga

In neighbouring Assam, a large number of liquor shops thrived only to serve the black market in Mizoram. Spurious liquor also found its way to my state, killing people. We had to arrest drunkards, smugglers and prosecuted them under the Act. Nobody helped us. Instead, the blame for all those developments was put only on us. Only Young Mizo Association (YMA) people sometimes came forward. So my government decided to lift the ban partially and brought in the permit system (six 750 ml bottles of Indian Made Foreign Liqour and ten bottles each of beer and wine per month per permit for personal consumption), making it a legal business. Now all those smugglers are gone.

Another problem of the state is massive drug abuse.

Yes. We have been trying to address the issue, offering rehabilitation to the abusers, but it is not easy for only a state government to tackle it; it is an international issue. The drug flow into Mizoram is because of the golden triangle. Neighbouring Myanmar is the centre of the menace and Mizoram is being used to take it to other parts of India. All the neighbouring states are disturbed states; my state is peaceful. So it has become the conduit. This drug menace of Mizoram is a global issue.

Yet another issue the opposition parties are raising as their election plank is your government’s new land use policy, implemented in 2011. The accusation is that it is helping only the Congress supporters.

My government returned to power in 2013 because of the success of the policy. The opposition parties know how successful it is on the ground; that the Congress is strong in the state only because of NLUP and they have nothing to counter it. It has so far helped 1.68 lakh families to become economically independent.

Sensing it as a trouble for their political success, all the five opposition parties of the state got together and sent a memorandum to Prime Minister Narendra Modi in May this year to put a stop to the programme, calling it election-oriented and misused for vote bank politics. But when the prime minister learnt about the programme, he was impressed; I was told that he said it must be implemented elsewhere too. Today, because of NLUP, Mizoram matches the gross state domestic product (GSDP) of the top five prosperous states. It is one of the fastest growing economies among the states.

Because of NLUP, our GDP is more than 8% which is higher than the national average of 6.7%. This year, the NITI Aayog and other agencies have forecast a double-digit growth. We have decided to bring another programme, the New Economic Development Policy (NEDP). It is to complement or supplement the NLUP.

We have tied up with the Indian Institute of Management, Kolkata, for guidance. Among other things, it will put an emphasis on entrepreneurship. Many of our young educated people are interested in entrepreneurship and that is why the move. The North Eastern Council has recently asked three northeastern states to look at NEDP for possible implementation. 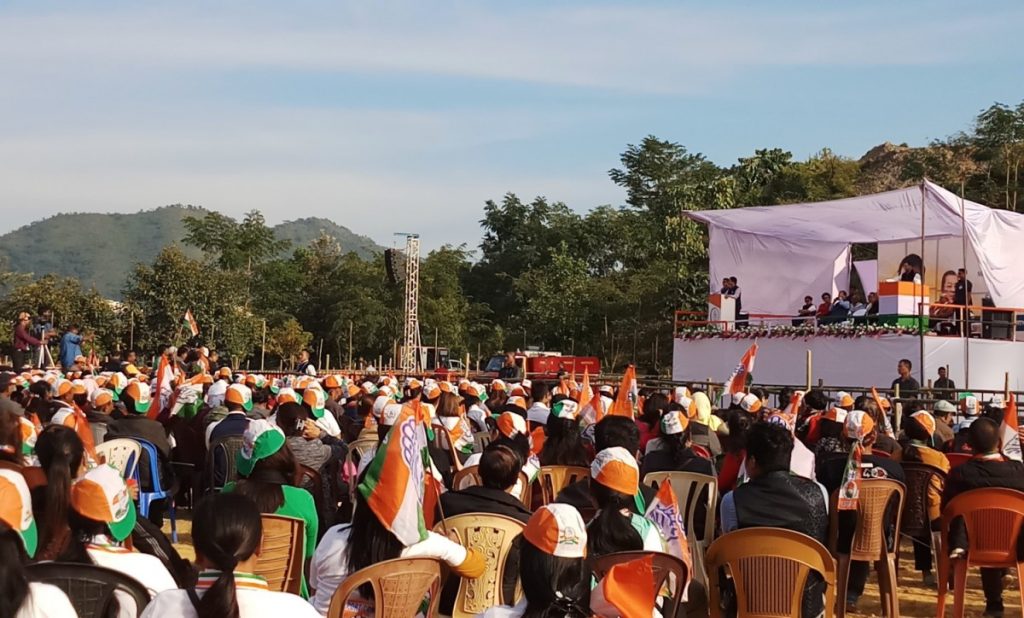 Besides facing the MNF and other regional parties, there is also the BJP factor in the Mizoram assembly elections for the first time. Though the party is not in a position to win a majority in the state, how much of it is an indirect threat to your party in these polls?

They are not at all a threat as far as the Congress party in Mizoram is concerned whatsoever. But the question is, how many candidates can they purchase to be a part of a government after the results are out, I don’t know. They have already purchased some to win elections (two Congress legislators have joined the BJP; two others have joined the MNF while one is contesting the polls as an independent candidate). But we will win seats even in the minority Chakma and Mara constituencies.

Both the BJP state president and the North East Democratic Alliance convenor Himanta Biswa Sarma said early this week that you approached BJP leader Rajnath Singh in 2017 to move over to the BJP. Sarma also said that his party is open to tying up even with the Congress after the polls to form a government in Mizoram.

That I approached Rajnath Singh was news to me, farthest from the truth. This is only to create confusion among voters, create doubt in the last minute. I have been a Congressman all my life and I will die a Congressman. I stepped down from power to allow for peace to come to Mizoram in 1986; my party gave up power so that the people get their state [from a union territory]. Why would I approach the BJP now? As far as Congress working with the BJP or entering into a post-poll alliance is concerned, it is again another lie.