If Indeed the Gupkar Alliance Is Irrelevant, Why Has the BJP Launched Into a Tirade?

Nothing would raise the stock of the BJP as much as to vanquish the Alliance in a freely conducted, constitutionally sanctioned democratic exercise.

The RSS and the ruling Bharatiya Janata Party (BJP) have unleashed a fierce denunciation of the Gupkar Alliance in Jammu and Kashmir.

Amit Shah has been pleased to dub the Alliance a “gang”. Indresh Kumar has charged that leaders of the Alliance intend to bring back “terror” into the state, and suggested that they leave Kashmir and India.

It would seem that the coming together of the mainstream political parties, all of whom stand by the accession of the state to India as negotiated by the Constituent Assembly of India in 1949, has not only taken the ruling BJP by surprise, but infuriated it by the prospect that its political calculations may stand to be upset vis a vis the coming elections to the District Development Councils in Jammu & Kashmir.

It is hard to understand why the decision of the mainstream parties in the Union Territory to fight the elections unitedly should so rile the powers-that-be, since, as best we know, there is no constitutional bar on what democratic course political parties choose to adopt to participate in the electoral process  anywhere in the republic. Nor do we know that these parties have been legally disbarred from  the coming democratic exercise. As leaders of the Alliance have pointed out, the ruling BJP continues to fight elections in many parts of India in partnership with other parties as a constituent of the National Democratic Alliance (NDA).

Nor can it be argued that the state may dictate what ideological platform any party of any group of parties may or may not adopt as their manifesto as they seek validation from the electorate. Nor is there to date any judicial ruling that requires that political parties may follow only some given agenda for electoral validation.

It has been the case of the ruling BJP that the Gupkar Alliance partners have long lost the favour of the people in Jammu & Kashmir. What better then than to let the people put their authenticated stamp on the alleged defunct status of the Gupkar Alliance. Indeed, nothing would raise the stock of the BJP as much as to vanquish the Alliance in a freely conducted, constitutionally sanctioned democratic exercise.  More than the strident rhetoric of the ruling party, the victory of its candidates in the coming Council elections would authoritatively persuade citizenry everywhere in the republic that the charge of irrelevance levelled by the BJP against the political conglomerate has been a well-founded one. 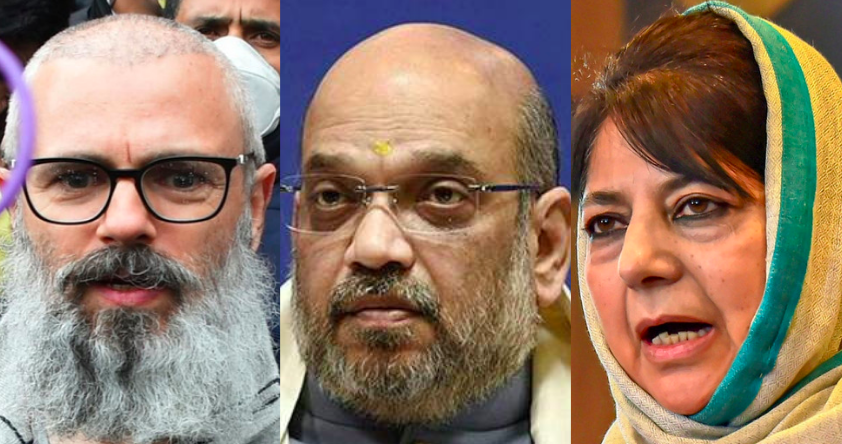 Many are, therefore, rather askance at the tirade the BJP has chosen to launch against its political opponents in Jammu & Kashmir. If anything, such a course may induce doubts in the popular mind about the political confidence of the BJP with regard to how the results of the elections may turn out. It may infact reinforce the suspicion that the ruling BJP may have been banking on the prospect of a boycott of these elections by the mainstream  parties—a rather weak position to have taken politically.

After all, many do wonder why, if these mainstream forces were infact so defunct did they have to be locked up at the time changes were made to the status of Article 370, and when the decision was made to diminish the erstwhile state to a Union Territory.

Now that these political groups are duly free citizens again, it seems churlish to suggest that they must not exercise their constitutional right to participate in the coming democratic exercise as they deem best. Indeed, the BJP ought to have been delighted at the risk the Alliance has chosen to take to test popular opinion; were they to come a cropper in the Council elections, they would not but hand a decisive validation to the ruling BJP and its protestations with respect to how Kashmiris have now rejected an older politics in favour of a ‘new India’ of the ruling party’s imagination.

Also Read: Gupkar Declaration II: Will History Repeat Itself in Jammu and Kashmir?

The BJP’s fulminations against the Alliance thus risk letting out a weak case. Not that anyone may prognosticate with any certainty how the Council elections may pan out, or whether any respectable number of Kashmiris may or may not choose to participate in the exercise.

The point, however, remains that the BJP, in denouncing the Alliance a priori rather than choosing to welcome its participation in the electoral process may be lending substance to the flak it has received both internally and from democratic voices outside as to its touted claims that a new healthy normalcy has overtaken the state. Its own logic would dictate that the BJP let the people assert that new normalcy by emphatically endorsing such claims with the power of their franchise.