Hyderabad Wants Development, But Gets Communal Rhetoric Instead

Over 40% of Hyderabad voters, in a recent study, stated that they are able to afford food ‘with difficulty’. 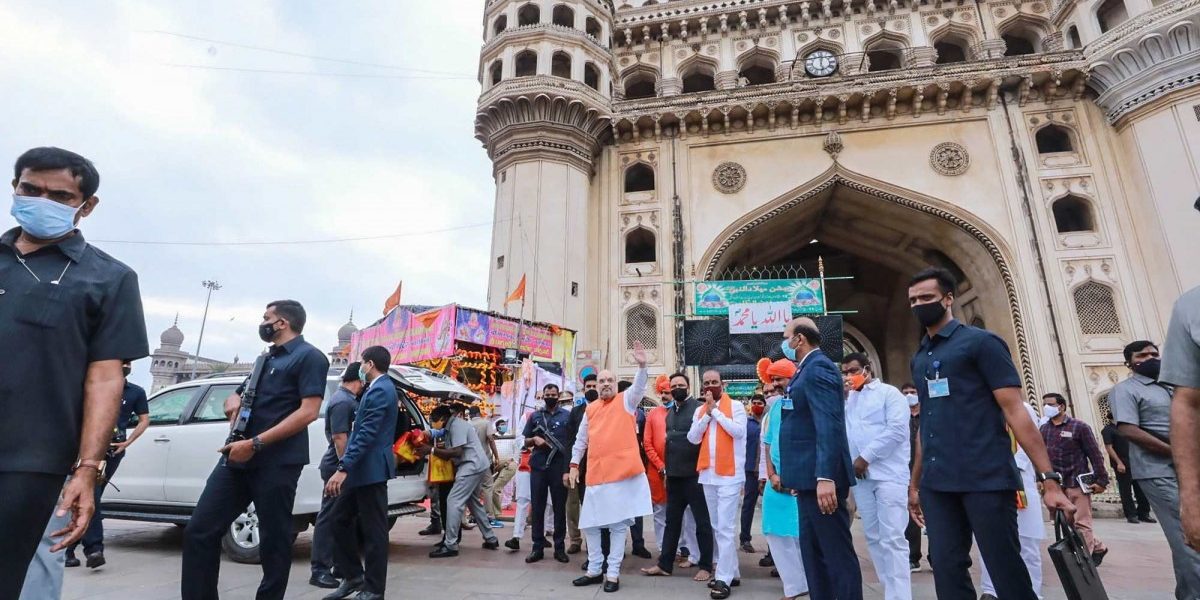 Over 40% of Hyderabad voters, in a recent study, stated that they are able to afford food ‘with difficulty’. Of these, over 90% stated that their food consumption has ‘decreased as compared to earlier years’. More than 95% of the respondents also supported Right to Recall, to have more powers over the corporators in Greater Hyderabad Municipal Corporation (GHMC), which goes to polls on December 1.

The study was done by the New Delhi-based research organisation, Institute of Perception Studies, which works in the areas of electoral reforms and democratic deficit, with special focus on municipal and panchayat levels. The study was conducted between November 1 and 15, 2020, and covered 15 out of the 30 circles in Hyderabad.

Instead of the development agenda, issues that have hijacked the election campaign are worship in temples and masjids, the symbolism of biryani, Rohingya Muslims, surgical strikes, Pulwama, Kashmir, Pakistan and changing names – Hyderabad to Bhagyanagar, and Hussein Sagar to Vinayak Sagar. Uttar Pradesh chief minister Yogi Adityanath drew a parallel, saying Faizabad was changed to Ayodhya, and Allahabad to Prayagraj. During his campaign, he also promised that voters of Hyderabad can buy land in Jammu and Kashmir.

Top Bharatiya Janata Party campaigners in the city are Amit Shah, J.P. Nadda, Smriti Irani – assisted by a non-campaign visit by Prime Minister Narendra Modi to check on a vaccine development facility in the city. Free vaccine to voters, incidentally, is one of the BJP’s assurances. The Telangana Rashtra Samithi (TRS) and All India Majlis-e-Ittehad-ul-Muslimeen (AIMIM) are having to match and counter the divisive narrative, which is only strengthening it. The Congress’s weak presence, which has made the entry of the BJP possible in the first place, does not divert this discourse, or its evident result.

It is incorrect that BJP’s Hyderabad campaign was quickly put together after the party’s win in the recent Dubakka by-elections in the state. The TRS defeat was, in fact, the reason why the government decided to advance the municipal elections, fearing further consolidation by the BJP. Long preparations of the BJP for the GHMC polls included an extensive mapping of Hyderabad to target segments of the population. For example, areas where the majority community may be living surrounded by the minority community. Further, areas where people from northern states have settled and identify with the BJP.

Changing the narrative to communal, polarising debates has been gradual. A secular and stable Hyderabad is the reason for its impressive growth and investments. Although there is a history of communal riots in the 1970s and 80s, it has not altered the development agenda of successive governments led by different political parties. The BJP’s municipal campaign seeks to unearth the fault-lines long buried, and create the anti-secular space to channel the growing anti-incumbency against TRS.

There is a certain opportunity for the BJP for three reason. First, the governance shortfalls are stark in the city, and the responsibility falls on TRS, which holds 99 out of the 150 municipal seats, and AIMIM which has 44. The Urban Distress and Reforms Study, 2020, was conducted in 15 out of the total 24 assembly constituencies of the GHMC. It revealed that, when given multiple options, over 67% voters were concerned with poor roads in the city, over 62% with poor sanitation, almost 51% about poor health, and 34% about poor education in municipal schools.

Second, there is a deep dissatisfaction among voters with the TRS leadership’s style of functioning, with the chief minister seen as a ‘benevolent dictator’ not open to discussions or democratic decision-making. His attempts to revamp registrations through the Dharani portal have been chaotic, and revealed the administration was ill-prepared for such measures.

Thirdly, TRS’s second term has been attributed to the Rythu Bandhu scheme or cash to farmers, ahead of assembly elections in 2018. Similarly, the TRS had announced cash relief for victims of the Hyderabad floods ahead of the municipal elections. Cash transfers for voters, however, may not be the best way of governance, especially in lieu of development, employment and economic vision.

The study revealed that Hyderabad voters sought control over their elected representatives. Over 89% respondents stated they had no power over corporators once they were elected, and 95% wanted the Right to Recall of non-performing corporators before the end of their tenure. An overwhelming 88% were prepared to vote again to recall corporators, and almost a similar number supported measures to control municipal officials. Right to Recall at municipal and panchayat level has been implemented in Madhya Pradesh since 2001 and in Chhattisgarh since 2007.

Significantly, over 91% of Hyderabad voters felt ‘anger and frustration’ when corporators did not care about their problems. This situation, unfortunately, may remain unchanged if elections are not fought with development as the central agenda.

Dr Kota Neelima is an author and independent researcher, focusing on institutional changes and electoral reforms at the municipal and panchayat level democracy.