The State Human Rights Commission stopped short of announcing action against the army, as it lacked jurisdiction.

Farooq Ahmad Dar while he was used as a human shield by the army. Credit: Video screengrab 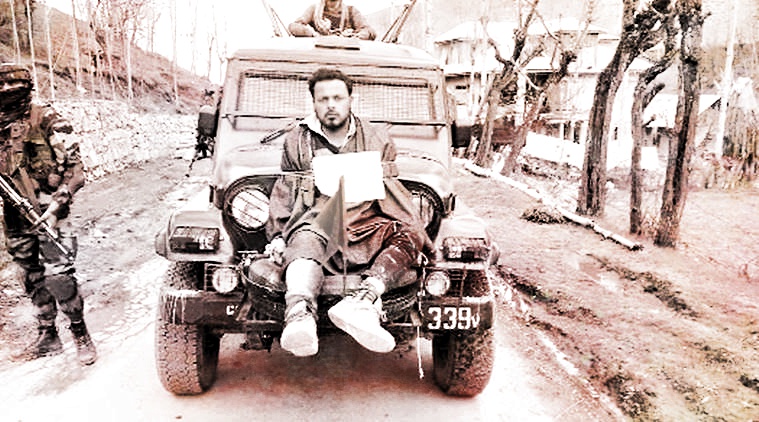 Farooq Ahmad Dar while he was used as a human shield by the army. Credit: Video screengrab

Srinagar: Jammu and Kashmir’s State Human Rights Commission on Monday directed the government to pay Rs 10 lakh as compensation to Farooq Ahmad Dar, the man who was strapped to an army jeep and paraded around villages as a human shield in Kashmir’s Budgam district on April 9.

In a five-page order, commission chairperson Justice (retd.) Bilal Nazki observed that 26-year-old Dar had been subjected to “torture and humiliation” by the army, besides “wrongful confinement”, resulting in “psychiatric stress which may remain with him for the entire life”.

However, the commission stopped short of announcing any action against those responsible for the criminal act – Major Leetul Gogoi from the 53 Rashtriya Rifles or his unit – saying the law didn’t give the SHRC jurisdiction over the army.

Dar, a resident of Chil village in Beerwah sub-district, was present when Justice Nazki delivered his judgment.

The incident, which had evoked widespread condemnation, occurred on an election day when eight civilians were killed in firing by security forces after mobs had tried to attack some polling stations in the Srinagar constituency. The constituency witnessed the lowest ever turnout in its electoral history, at 7%. Dar was, ironically, among the few villagers who had turned up to vote on that day.

According to Dar, a shawl weaver, he was riding his bike to attend a condolence meeting at his brother-in-law’s house in Gampora village when he was picked up by the army.

“For the humiliation, physical and psychological torture, stressful and wrongful confinement, the commission thinks it appropriate to direct the state government to pay Rs 10 lakh compensation to the victim,” reads the directive, asking the government to implement the order within six weeks.

Nazki referred to a Supreme Court judgment by V.R. Krishna Iyer in which he had observed that “zoological culture can’t be compatible with reverence for life, even of a terrible criminal…some in authority are sometimes moved by the punitive passion for retribution through the process of parading the under trial prisoners cruelly clad in hateful irons”.

A medical examination of Dar at the Government Psychiatric Diseases Hospital in Srinagar following the incident had confirmed that he had developed “psychological problems including acute stress disorder”.

On May 29, army chief Bipin Rawat said that the army is facing a “dirty war” in Jammu and Kashmir which has to be fought through “innovative” ways, defending the use of Dar, whom the army had termed a “stone pelter”, as a human shield.

The SHRC today, however, implicitly questioned the army chief’s logic, arguing that the law “doesn’t permit even chaining or handcuffing” of any person including convicts.

“How can one approve making an innocent person a human shield, and parading him chains tied to a jeep for hours,” Justice Nazki said in the judgment, stressing that Dar was innocent and not a stone pelter.

While denouncing the act by the army, Justice Nazki referred to the Supreme Court’s celebrated Prem Shankar Shukla judgment to remind the state of its responsibility:

“…to bind a man hand-and-foot, fetter his limbs with hoops of steel, shuffle him along in the streets and stand him for hours in the courts is to torture him, defile his dignity, vulgarise society and foul the soul of our constitutional culture. Where then do we draw the humane line and how far do the rules err in print and praxis.”

The SHRC started investigating the case after human rights activist and chairman of the International Forum for Justice and Human Rights Jammu and Kashmir Mohammad Ahsan Untoo filed a complaint against the army for using Dar as a human shield on April 17.

Subsequently, the commission directed the police, which was investigating the case, to file a detailed report before it. The report, along with the testimony of seven witnesses, confirmed that Dar had been used as a human shield.

“The police report confirms that Dar was used as human shield by the army and therefore there can’t be any debate on whether the treatment given to Dar was a violation of human rights or not. There are laws in this country and international laws which prohibit such treatment even of a convict, and such treatment of a human being can’t be accepted in a civilised society,” reads the judgment.

While human rights groups and civil society forums in Kashmir had demanded action against Major Gogoi, he was awarded the chief of army staff’s commendation card by army chief Rawat for his efforts in “counter-insurgency operations”, even as an army court of inquiry was still deliberating on the legality of his controversial action.

Reflecting on the role of the army unit involved in the incident, the SHRC said it was “handicapped” when it comes to holding the army responsible for its acts because of the “limited applicability” of the Protection of the Human Rights Act of 1993.

“This Act is applicable to the extent of excluding the state commission’s jurisdiction to entertain certain matters,” the judgment reads. “Therefore the commission chose not to issue any notice to the Centre or armed forces, but the fact remains that the protection of life and liberty of people is the basic responsibility of the state government.”

In view of the Act’s limited applicability over the army, the commission remarked that any observation made by it shouldn’t be taken as “expression of any opinion regarding involvement of army officers”.

Soon after the order came out, Dar expressed satisfaction over the way the SHRC had dealt with the case. But anger was still visible on his face. “It’s okay,” Dar said in a soft tone. “I never committed any crime but I had to pay such a heavy price,” he said, adding he had to suffer mental and physical torture.

Most of his anger was triggered by the award Gogoi received. “The government, the forces all came together against me to prove I am a stone pelter. I have never pelted a stone,” he said, as people who were present there congratulated him on the commission’s ruling.

Minutes later however, in a tweet, former chief minister Omar Abdullah said it remains to be seen whether the government will accept the SHRC ruling.

Will be interesting to see if the BJPDP government challenges the decision or pays the compensation. https://t.co/QuWKeH4JjV

A senior official from the state law department, on condition of anonymity, said the commission has “only powers to make recommendations” and its orders were not binding on the government.

“Let’s see how the government reacts to it,” the official said.

When asked whether the PDP-BJP coalition will implement the SHRC ruling, government spokesman Naeem Akhter chose not to give a direct response. “The SHRC is a respected institution and has every right to deliver the rulings. We will take a call on it (the judgment),” he told The Wire.