Jagdalpur Legal Aid Group’s Shalini Gera has been charged with being a Maoist cash conduit despite the police having little evidence to back the claim. 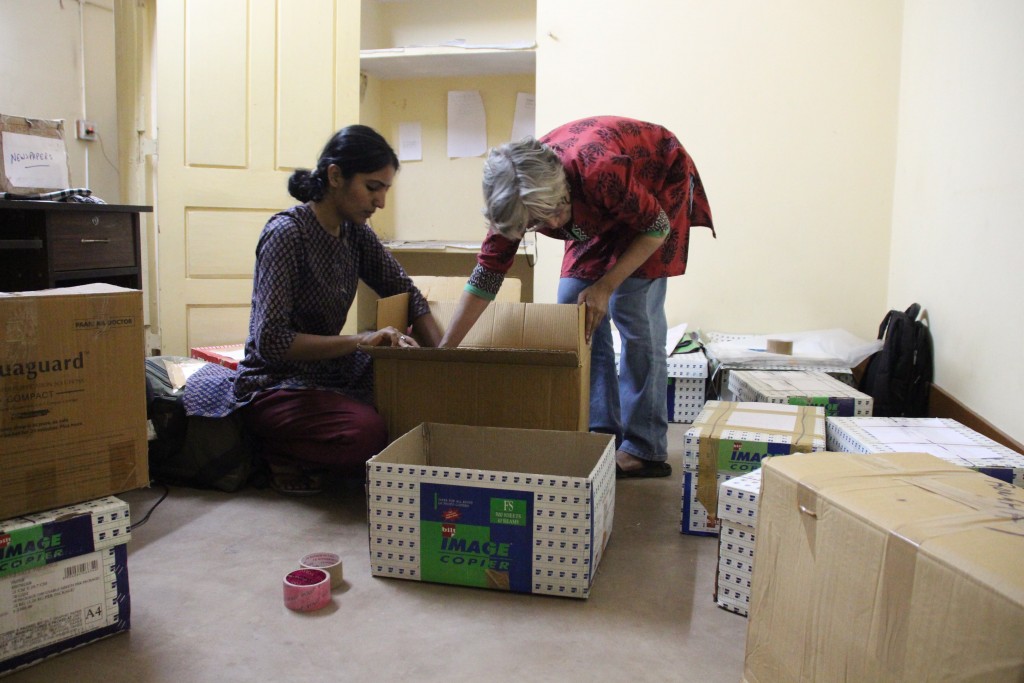 Gera, however, has said that the charges are totally false. In a letter to National Human Rights Commission (NHRC), she has claimed that the police’s action against her is yet another tactic to intimidate and silence human rights defenders in Bastar.

Gera, who along with her colleagues, has been taking up cases of alleged police atrocities against Adivasis has been under constant attack by state-sponsored vigilante groups like AGNI. JLAG lawyers moved from Delhi to Bastar’s Jagdalpur in July 2013 and have been practicing in Bastar district courts since then. Their work centres on defending those Adivasis who have been implicated by the police on the basis of extremely weak evidence. As a result, JLAG has been subjected to constant scrutiny by the police.

Earlier this year, Gera and her colleague Isha Khandelwal were forced out of Jagdalpur amidst escalating threats, intimidation and attacks for their work defending the Adivasis.

A hint that the police was planning some sort of action against Gera first surfaced when a police complaint made against her by a man called  Vinod Pandey surfaced on a WhatsApp group on December 27.

The complainant Pandey claimed that Gera, along with two of her colleagues and seven JNU students, had gone to two villages – Matenar and Palnar in Dantewada (Bastar) – and incited the villagers against the police, urging them to support the Maoists. After the meetings, Pandey claimed, Gera met Naxal commander Ayutu who handed over Rs 10 lakh in old notes to the team, following which Gera and her team travelled to Jagdalpur and stayed in a place called Goel Dharamshala.

Here, Pandey said, “do kale kale ladke (two dark skinned boys)” came over on a motorcycle and exchanged the old notes with new Rs 2000 notes after charging a 30% commission. The complainant urged the police to inquire into the matter and take “adequate action.”

Soon after the complaint was filed at the Jagdalpur police station, none other than Bastar’s superintendent of police (SP), R. N. Dash, called Gera from an unofficial phone number inquiring about the details mentioned in the complaint.

In the letter to NHRC dated December 27, Gera said that her stay in Goel Dharamshala was arranged by the divisional commissioner Dilip Wasnikar and her presence in Jagdalpur was widely publicised because she and team were there to oversee the postmortem and cremation of Somaru Pottam, who the security forces had claimed was killed in an encounter on December 16.

Contrary to the police’s claim that Pottam was a Maoist, his parents have moved the Bilaspur high court saying that their son had no connection with Maoists and was killed by security force personnel in cold blood in full view of the villagers. The case has received significant media attention, and Gera had also organised a press conference regarding the matter.

In the letter to NHRC, Gera clearly said that her stay in Jagdalpur was no secret. “We had requested the commissioner of Bastar, Mr. Dilip Wasnikar, to make arrangements for the stay of the villagers and the legal team, and he had most graciously made arrangements in Room no. 3 of the Goel Dharamshala in Jagdalpur for this purpose,” wrote Gera.

Despite this, on December 26, a team of policemen barged into the dharamshala, called the entire legal team out of their rooms, noted down the details of their identity cards and claimed that they had been “caught in the room.” The police team asked Gera and her colleagues to accompany the police to the thana (station) for interrogation, although they neither had a warrant nor a legal notice to raid the place. However, when divisional commissioner Wasnikar intervened, the police left.

The very next day SP Dash called Gera to inquire about the details mentioned in the complaint, which was filed after the illegal police raid occurred on the evening on December 26.

Dash repeatedly asked about her meetings at Palnar and Matenar in a “loud and offensive” manner, Gera wrote in her letter.

Gera explained that she had gone to Palnar in Dantenwada district to meet her client Mundra Ram Sori several months ago and did not hold a meeting with the villagers there. She also said that she had visited Matenar to attend a meeting on Adivasi rights which was organised by People’s Union For Civil Liberties (PUCL) on December 20. Gera added that no JNU student had accompanied her and the charges of being a cash conduit for Maoists were baseless and vindictive.

In the letter, Gera told NHRC that Dash had called her from a man called Farukh Ali’s number, who was also a member of the state-sponsored vigilante group Agni. “It should be noted that there is one Farruk Ali who belongs to the vigilante group “AGNI” active in Bastar, and he has recently sent defamatory and inflammatory messages from the same phone number against some attendees of a PUCL meeting in Matenar village, containing confidential police information about them, on several WhatsApp groups, and has also threatened journalists earlier,” she said.

Incidentally, Ali later posted a copy of Pandey’s complaint on WhatsApp for circulation.

The handling of the matter by the Bastar SP and his prompt action on the complaint, which merely makes baseless allegations, have raised many civil rights activists’ suspicions over the police’s intentions. The record of the Bastar police, under the leadership of S.R.P. Kalluri, inspector general of police (Bastar Range), in handling human rights related cases has come under repeated criticism by civil society organisations. The police has often supported vigilante groups like Agni and has been at the forefront of attacking human rights defenders who question atrocities against Adivasis. So much so that personnel from the security forces have, in the past, also organised several protest marches where they burnt effigies of human rights activists.

Earlier this year, the CBI filed a chargesheet against seven former special police officers – now renamed armed auxiliary forces – for burning down three villages in Bastar. Through the investigation, the Bastar police’s earlier claims of Maoists being responsible for the fires were proven false. Several journalists too have been at the receiving end of this intimidation for reporting human rights abuses in the region.

Recently, the academic Nandini Sundar, who played a crucial role in getting the Supreme Court to ban the state-sponsored terror group Salwa Judum and to direct the CBI to investigate Kalluri’s men was accused by Kalluri of being involved in the murder of an Adivasi villager. Also accused were JNU faculty member Archana Prasad and political activists Sanjay Parate and Vinnet Tiwari. But when the wife of the murdered man denied their involvement in the incident, the role of the Bastar police came under sharp scrutiny. Last month, the NHRC issued notice to Kalluri and the Chhattisgarh government for leading a witch-hunt against Sundar and her colleagues.

The arrest of the TDF fact-finding team and the continual harassment of the lawyers based on charges of exchanging old notes demonstrates that the demonetisation has given the Bastar police a new opportunity to abuse its power, civil rights activists say.

“The Bastar police has made a mockery of the law. It has also misled the courts in the name of fighting Maoism,” CPI(M) leader Sanjay Parate said while demanding the immediate release of the TDF activists.

Condemning the arrests and harassment of Gera, Anand Teltumbde of the Committee for Protection of Democratic Rights (CPDR) said, “There is a pattern in the behaviour of the Chhattisgarh police. Early this year, two women lawyer activists Shalini Gera and Isha Khandelawal were forced out of Jagdalpur. In February, Soni Sori, local tribal teacher-turned-activist and AAP candidate in the last Lok Sabha elections, was asked to vacate her house. Soni Sori and her nephew Linga Kodopi have been facing persistent harassment from the police. Before that Malini Subramanium, a freelance journalist and former head of the International Committee of Red Cross in Chhattisgarh, left Bastar due to alleged harassment by local police.”

Talking about the ‘outrageous charges of murder’ on Sundar and others, he called the police’s actions vindictive. “This all has been happening with direct/indirect backing of the controversial Bastar IG, S.R.P. Kalluri who is in turn backed by the state government.”

The Hyderabad-based Civil Liberties Monitoring Committee also denounced the attack on human rights defenders. “It (the arrest of TDF activists) is a clear sign of nexus between Telangana and Chhattisgarh police to intimidate and suppress the activists in the name of Maoists who are fighting for the rights of the Adivasis.”

The PUCL also demanded the immediate release of the TDF members. “PUCL strongly condemns the illegal and unlawful actions of both the Telangana and Chhattisgarh police. Such acts of highhandedness and flagrant abuse of law is only possible when the State promises the police total impunity and protection from any prosecution for abuse of law. The actions of the police of both states is violative of the fundamental rights to free movement, freedom of speech and expression and the fundamental duty to protect the fundamental rights of adivasis and other local people in Bastar area who are victims of a severely repressive state police. It is also to scare others in the future from daring to visit the conflict hut areas,” said the organisation in a press release.

Most civil rights organisations were of the view that fact-finding teams, journalists, human rights activists played a significant role in highlighting police excesses in Bastar as despite several allegations of staged encounters, the Chhattisgarh government has refused to set up independent criminal investigations into these cases.

Condemning the arrest of the TDF activists, Amnesty International India’s Abhirr VP said “Chhattisgarh authorities must immediately release all seven men and stop abusing harsh laws to harass and intimidate activists and journalists who are well within their rights to investigate human rights abuses and seek accountability.”

“It is disconcerting how frequently draconian laws are being used to silence activists and journalists who work on issues linked to conflict between security forces and Maoist armed groups. These attempts at intimidation cannot become order of the day,” he added.

Amnesty strongly criticised the use of the Chhattisgarh Special Public Security Act, which was enacted in 2005 to combat violence by Maoist armed groups. “Several parts of the Act violate India’s obligations under international human rights law. The Act contains broad and vaguely worded definitions of ‘unlawful activity’. The definition includes, for instance, an act which ‘tends to interfere with maintenance of public order’ or ‘which is designed to overawe…any public servant’, or acts ‘encouraging or preaching disobedience to established law and its institutions’. The UN Special Rapporteur on the situation of Human Rights Defenders has called for the repeal of this law.”