How the Congress Is Normalising Soft-Hindutva in Madhya Pradesh

The party's polity still leans towards the right, leaving the Congress and the BJP to engage in displays of competitive religiosity. 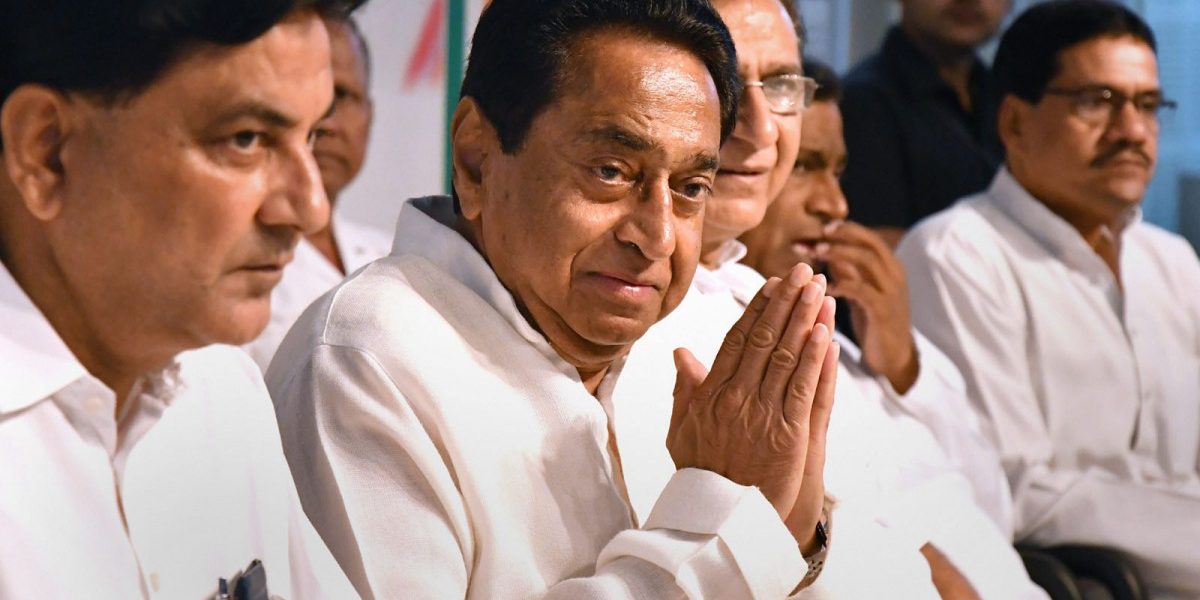 In the left liberal discourses one often hears that while the BJP is programmatically communal, the Congress is pragmatically so. The view finds an alarming resonance in the two-month-old Kamal Nath government in Madhya Pradesh.

Of course, the chief minister has brought about several changes that positively distinguish his government from the previous Shivraj Singh Chouhan’s. But secularism, which is supposed to be at the core of the Congress ideology, is not one of those changes. Not yet.

Under Kamal Nath, professing secularism seems to remain an avoidable risk, lest the BJP maliciously equate it with Muslim appeasement. Given the fact that the thinly spread 6% Muslim population in Madhya Pradesh is not a major influence in the state’s election arithmetic, the Congress appears to prefer peddling soft-Hindutva at the expense of secularism. Many of the chief minister’s decisions have betrayed that preference.

The latest is the invocation of the National Security Act (NSA) against three Muslim youth by the Khandwa collector Vishesh Gadpale. The accused Azam, Nadeem and Shakeel were arrested on charges of cow slaughter from Kharkali village under Morghat police station of the communally sensitive Khandwa district on February 2.

Superintendent of police Siddharth Bahuguna, who recommended slapping the NSA against the youth, justified the decision on the grounds that exemplary action against the accused was warranted to preempt outbreak of communal tension over the alleged cow slaughter in the region.

State’s home minister Bala Bachchan supported the SP’s stand, adding similar action would be taken even in the future in cow slaughter cases.

“If anyone will indulge in killing of cows, we will take the same action against them again and again. Police will continue their action against cow slaughter in the future,” Bachchan said.

Muneesh Mishra, district Congress president of Khandwa, has also praised the police, saying strict action against cow slaughterers is the need of the hour.

The ruling party’s support to the Khandwa officials emboldened their Agar-Malwa district counterparts to invoke the NSA against two youth two days later.

Mehboob Khan and Rodumal Malviya were booked for alleged illegal transportation of cattle and disruption of public peace.

The BJP has, predictably, welcomed the decisions, saying no mercy should be shown to cow slaughterers. It has even threatened to launch an agitation if the Congress government deviates from the previous BJP government’s tough stand against cow slaughter. The BJP invoked the NSA against at least 22 people accused of cow slaughter.

Those, particularly from the Muslim community, who believed the Congress would act differently on this sensitive issue, are dismayed. Secular political parties and liberal-progressive media have severely criticised the Madhya Pradesh government for praising the Khandwa SP and collector for invoking the NSA against the three Muslim youth.

Kamal Nath has not disapproved the invocation of the NSA in two districts, much less take action against the responsible officials. Neither has he publicly acknowledged Congress president Rahul Gandhi’s purported message that invoking the NSA for alleged cow slaughter and transportation cases was a “mistake”. Former Union finance minister P. Chidambaram said that the Congress president had communicated his belief to the Congress’s Madhya Pradesh leadership. Rahul Gandhi has reportedly said invoking the NSA in cases of cow slaughter is a ‘mistake’. Credit: INCIndia/Twitter

During Rahul Gandhi’s visit to Bhopal, MLA Arif Masood conveyed his protest against the Khandwa officials to the party president. The MLA also wrote to the chief minister, demanding an SIT be set up and that the Khandwa district collector be transferred for invoking the NSA.

Senior Congress leader Digvijay Singh, who strongly opposed using the NSA in cases of cow slaughter during the BJP government, has only said, “I don’t think there are national security concerns in cow slaughter.

It was precisely to safeguard national security concerns that Indira Gandhi, as prime minister, introduced the NSA, replacing the National Security Ordinance, in 1980. The Act (through section 3) empowers the Centre, state government or even a commissioner of police or a district magistrate to detain any citizen or a foreigner, to prevent them from acting in a prejudicial manner against the ‘security of the State’, ‘maintenance of public order’ or ‘maintenance of supplies and services which are essential to the community’.

The MP government’s decision is being opposed on two grounds. Cow slaughter is neither a threat to the security of the state nor a breach to the maintenance of public order. Two, the provisions of the Act banning cow slaughter, under which the accused were arrested, are enough and, therefore, no harsher punishment was called for.

The top Congress leaders’ rather subdued reactions, coupled with the chief minister’s inaction, have signaled to the bureaucracy that the policy on tackling allegations of cow slaughtering has not changed.

Competitive display of religiosity between the BJP and the Congress has brought the political discourse in Madhya Pradesh to such a sorry pass that soft-Hindutva has virtually supplanted secularism. Much to the delight of the BJP, its main rival appears heading towards normalising soft-Hindutva.

Particularly since 2014, the Congress in Madhya Pradesh began to betray the paranoia that even talk of suggesting championing Muslim interests is fraught with the grave risk of letting the BJP take political advantage. The paranoia ensured that the Congress chose not to react to the incidents of cow vigilantism, slapping of the NSA or internment of innocent men, if the victims happened to be Muslims. The Congress leaders were not moved to condemn even the extra-judicial killing of eight under-trials on the outskirts of Bhopal, hours after their alleged escape from the Bhopal central jail on October 31, 2016.

The Congress’s silence on Muslim issues runs, mostly, from the bottom to the top. The Congress’s grassroots workers have become ideologically indistinguishable from those of the BJP. Their ecosystem also demonises Muslims on social media, eulogises the obscurantist ideas about Hindutva and celebrates the faux muscularity of India.

Also Read: With a Grand Alliance in the Making, Remembering Another From Decades Before

The 15 years of uninterrupted BJP rule has convinced a large section of the Congress cadre that pursuit of power needs only different slogans and strategies, not necessarily a different ideology. In most of the cases of harassment of Muslims by the Shivraj Singh government, it were Congress workers who prevailed upon the leadership not to react.

It was no surprise then that the Congress workers have enthusiastically lapped up the party’s strategy to run the campaign for the recent assembly election on the plank of soft-Hindutva, jettisoning secularism. They are more comfortable with presenting Rahul Gandhi as a great “Shiv Bhakt” rather than the inheritor of Jawaharlal Nehru’s secular ethos.

At the local level, the workers thought – and showed – they scored more brownie points for ferreting the facts that Kamal Nath built a huge Hanuman temple in Chhindwara, that Digvijay Singh undertook a six-month Narmada perambulation and that Jyotiraditya Scindia never missed an opportunity to visit temples during his campaign trail. 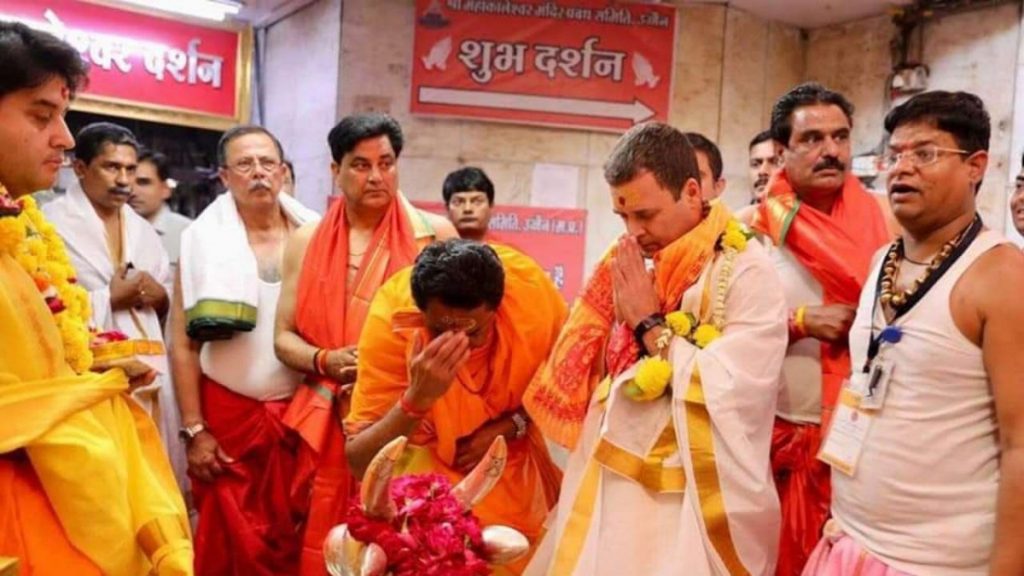 Kamal Nath was quick to grasp the collective yearning for soft-Hindutva among the workers when he took over as state chief in May last year. Digvijay Singh and Scindia too agreed to play along.

The Congress chalked out a strategy to run down the BJP on its strong pitch-Hindutva. Broadly, its theme was: the BJP is not the sole contractor of the Hindu religion.

The first significant manifestation of this theme was Rahul Gandhi’s projection as a “Shiv Bhakt” during his visit to Bhopal on September 17, 2018. The left liberals squirmed at this; media created a soft versus hard Hindutva narrative; the BJP cried foul and the Congress was delighted at the first success of its strategy.

The second part of the strategy unfolded in two announcements made by Kamal Nath: opening cowsheds in all 23,000 village panchayats and constructing the mythical path which Lord Rama is believed to have traversed during his 14-year exile. These two announcements were incorporated into the party’s manifesto. The Congress hoped to entice voters by highlighting that the BJP failed to deliver these demands during its 15-year rule.

That the Congress strategy worked is obvious from its victory in the assembly election.

However, having ridden the soft-Hindutva horse, the party is finding it hard to dismount.

The BJP, which won just seven seats less than the Congress, will not let the government deviate from the soft-Hindutva plank, even if the latter so wishes.

This was apparent from the U-turn it performed over the singing of ‘Vande Matram’ by government employees at the state secretariat. Since 2006, the national song is sung on first working day of every month, implemented by then chief minister Babulal Gaur.

When this tradition was not followed on January 1, 2019, the BJP created a huge uproar. Under the opposition party’s pressure, the chief minister modified the practice, adding more show and pomp to it. He said ‘Vande Matram’ would be recited with greater panache, accompanied by a police band. Even the general public has been invited to participate. On February 1, ‘Vande Matram’ was recited in this fashion. The BJP was quick to take credit for the chief minister’s volte-face.

The Congress was also forced to alter its decision to stop pensions to the Maintenance of Internal Security Act (MISA) prisoners under the BJP’s pressure. The Kamal Nath government has decided to continue the scheme. In 2008, the BJP started the pension scheme for those detained during the Emergency. Around 2,000 beneficiaries are paid Rs 25,000 per month. 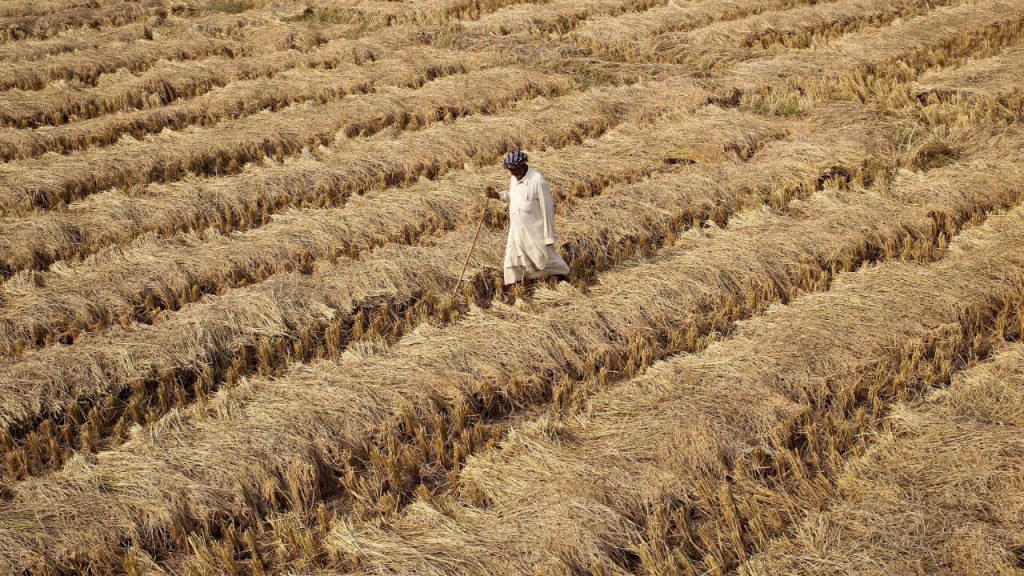 For cow protection, the Congress government has provided Rs 450 crore to open 1,000 cowsheds. However, to fulfil the promise of opening cowsheds in all 23,000 panchayats, the government requires a whopping Rs 27,000 crore because it has hiked the maintenance cost of each cow from Rs 4.50 to Rs 20. The state has to feed an estimated 60 lakh stray or unproductive bovines.

Given the sentimental value of the cow, the government cannot afford to dither on the promise, especially with the Lok Sabha elections on the horizon. The empty state exchequer and a gargantuan debt of Rs 1.85 lakh crore have posed grave financial challenges.

At present, 614 shelters are operating across the state, all privately managed. Private gaushalas have increased from 604 in 2012 to 614 in 2018, but the population of cattle (in cow sheds) has drastically fallen from 1.5 lakh to 25,000, according to the Madhya Pradesh animal husbandry department’s official records.

And to make matters worse, the government is already saddled with a plethora of unfulfilled poll promises that need several thousand of crores to meet. Waiving loans may cost Rs 55,000 crore. Financial support to unemployed youth also has huge financial implications.

Imposing higher taxes to fulfil the promises, therefore, looks inevitable. The quantum of the likely tax burden will be clear only when the government presents its first budget in the budget session that commenced on February 17.

For mobilising the resources to meet the expenses for cow shelters, the government is said to be weighing options of imposing a specific cess. According to sources, the options could be imposition of cess on expensive cars, toll-tax or stamp duty. The chief minister might emulate the BJP-ruled Uttar Pradesh and Haryana.

While left parties criticise the Kamal Nath government for not being any different from those of the BJP’s, they do not have the numerical strength to have an impact. Outfits such as the Bahujan Samaj Party of the Samajwadi Party also have a limited presence.

The Madhya Pradesh polity still leans towards the right. So, the state is set to witness another contest between soft and hard versions of Hindutva in the coming Lok Sabha election.