How Political Parties Could Use State Data Hubs To Sway Voters

Data about beneficiaries of welfare schemes lets the BJP know where Central schemes have worked well and where they haven't. This lets them decide how they want to campaign in specific regions. 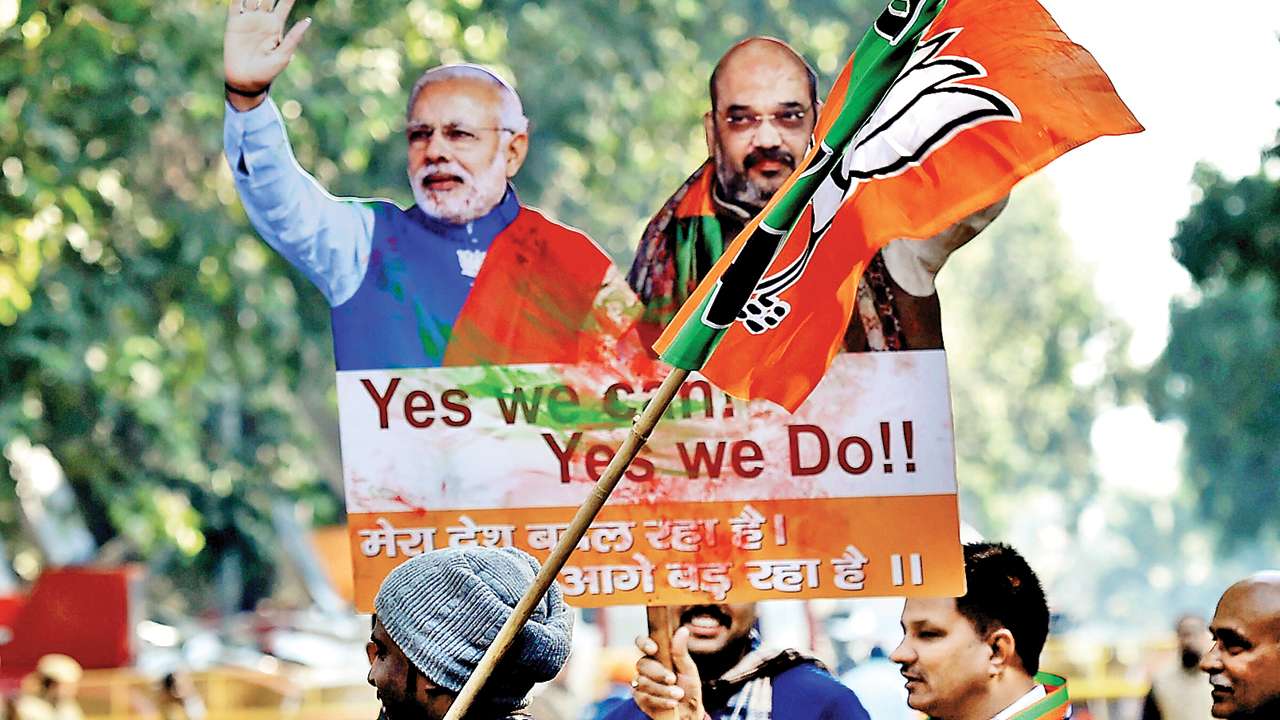 Note: This is the second story in a three-part series on voter targeting, Aadhaar-linking and the Election Commission. Read the first here.

New Delhi/Bangalore: In January 2015, the Unique Identification Authority of India (UIDAI) made a seemingly innocuous suggestion to the Election Commission (EC).

The recommendation: give state governments across the country unfettered access to India’s centralised voter database.

Specifically, the Aadhaar agency wanted each ‘state resident data hub’ (SRDH) –  a repository of personal data that gives state governments a 360-degree view of each local resident – to be given access to the Electoral Photo ID Card (EPIC) database.

Also Read: How Did the EC Link 300 Million Voter IDs to Aadhaar In Just a Few Months?

Internal correspondence obtained through Right to Information (RTI) requests show that the UIDAI made this suggestion in the context of the EC’s ‘purification’ programme – an exercise that was aimed at cleaning up the electoral rolls and weeding out fake or ghost voters.

The EC eventually refused the UIDAI’s request, internal documents indicate, even though the latter aggressively lobbied the Election Commission for months after the initial suggestion was made. 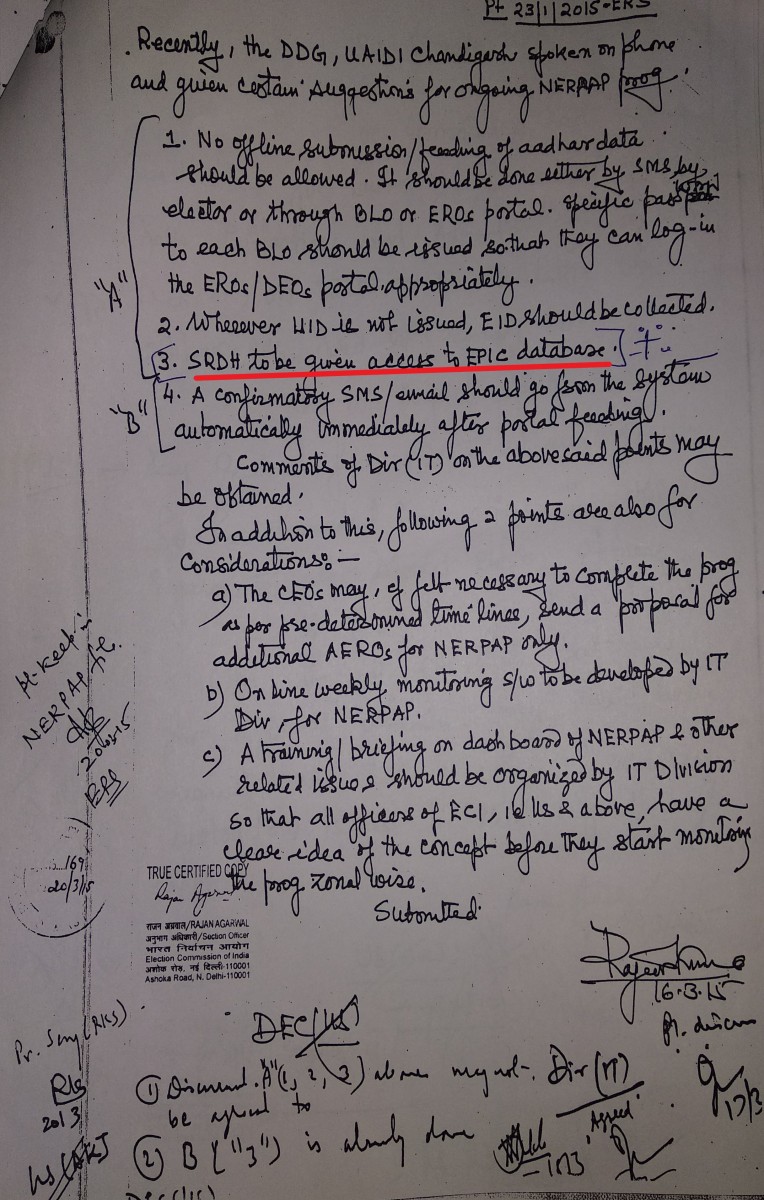 A copy of the handwritten note from the UIDAI to the EC. Credit: The Wire

Sources within the Election Commission familiar with discussions that took place at the time also indicated that there were concerns raised over how much “political access” should be allowed to India’s voter ID database.

Whether the UIDAI knew it or not, the debate nevertheless touched on an issue that has implications for how India’s political parties will campaign and target voters in the upcoming assembly polls and the 2019 elections.

Over the last five years, SRDHs, which essentially integrate individual state government databases with the help of Aadhaar, have refined their data with the addition of voter ID information of individual electors.

Also Read: Did SC Re-Affirm that Aadhaar Database Could Be Used for Criminal Investigations?

This has, whether the Election Commission likes it or not, laid the groundwork for incumbent governments to use these databases data to craft messages, advertising and propaganda to target voters while campaigning for elections.

Any strategy regarding voter targeting consist of three broad components: voter ID and polling booth information, data on individual and groups of voters compiled from various sources and the communication channels by which a political party can interact with and influence an elector.

The first piece of the puzzle is available publicly for most states: the Election Commission publishes India’s electoral rolls online. The only catch is that most of this data isn’t usually available in an easy, machine-readable format. It has to be painstakingly scraped, spliced and then put together in a new form to be of any use.

The second component comes from a multitude of sources, some of which come from ethically grey areas: past voting behaviour, on-ground surveys, data gleaned from the mobile apps of political parties, information from data brokers and more recently, parties have tapped into electricity and water bills to build socio-economic profiles for specific groups of voters.

To this melting pot, it’s becoming clear that the Bharatiya Janata Party wants to add another a logical source of data: the beneficiaries of government welfare and development programs.

In the run-up to the upcoming elections, specifically the Rajasthan and Madhya Pradesh polls, the BJP has repeatedly made references to this new ‘vote-bank’.

Beneficiaries are our new voter base, declared Union minister Prakash Javadekar, while on the Rajasthan campaign trail. In Maharashtra, district-level workers have been asked to tap beneficiaries of development schemes as potential voters for the 2019 general elections. In individual press interactions, BJP president Amit Shah has indicated that if the party is able to pull this off, it could win over 200 million people across the country.

Importantly, beneficiary data lets the BJP know where Central schemes have worked well and where they haven’t. This lets them decide how they want to campaign in specific regions.

In a largely unnoticed story a few months ago, Telegraph reported that the the BJP has already begun to map beneficiary details onto polling booth-level information. As the report noted:

The data is being broken down into polling booth-level information. A monitoring cell will be set up in every state and party cadres will be asked to be in regular touch with these families in the run-up to the polls, sources said.

The stress on data of the beneficiaries can be gauged from fact that the BJP has called a meeting of party chief ministers on August 28 in Delhi. The chief ministers have asked to bring data on beneficiaries of central schemes in their state in a pen drive, the sources said. (emphasis added).

Where does this data – which elected heads of state governments are handing over to their political parties on a pen drive – come from? It’s not clear, but one logical source would be Aadhaar-centric state databases and state resident data hubs (SRDHs).

SRDHs started out as a copy or ‘mirror’ of the data held by the UIDAI in its central database, but quickly expanded to include additional information such as ration-card numbers, unique household numbers and disability records.

This data was gathered under ‘KYR Plus’ – ‘Know Your Resident Plus’ – a system that allowed state governments to ask for more information than is mandated for the creation of an Aadhaar number during the enrolment process.

The collection of individual Aadhaar numbers are what allowed state governments to consolidate a wide range of citizen data scattered across disparate government departments under the umbrella of a SRDH or a similar master database of their own making, thus allowing the creation for detailed personal profiles.

For instance, as has been widely reported, the state hub in Andhra Pradesh contains a dizzying array of data-points on residents: “GPS coordinates of homes, the medicines they use, the food rations they eat, what they say about the Chief Minister on their social media accounts, their caste and sub-caste, their religion, their student scholarships and old-age pensions, their movement in every state ambulance, and of course – their Aadhaar numbers”.

In the US, the Cambridge Analytica scandal happened because election outcomes were influenced by micro-targeting of voters through data mining.

In a talk earlier this year, former BJP campaign consultant Shivam Shankar Singh has outlined how this is achieved in India:

The only problem is that while India’s electoral rolls have been public for a long time, it’s extremely tricky to merge a beneficiary database with voter ID and polling booth information.

Consider the following example. Suppose an Indian political party has identified a person from a state government database of beneficiaries and they even know her constituency.  Merely searching for that person by name would throw up numerous matches. And if that person’s name is spelled one way in the government database and another way on the electoral rolls, it would be nigh impossible.

For instance, a search of the second author’s name in Mahadevapura constituency in Bangalore, yields the following entries:

Now, if a person’s Aadhaar number was seeded on voter databases and in other databases, it would make the matching process trivially simple. Aadhaar would work as an unique identifier, which would mean you could search for a person on the beneficiary dataset and a political party’s voter ID database using their Aadhaar number.

This is what would have happened if the Election Commission gave SRDHs access to its database, and if it had finished the Aadhaar-voter ID linking process. (It was only able to link 300 million voter IDs to Aadhaar before the Supreme Court forced it to stop).

However, even though SRDHs didn’t get access to the EPIC database in 2015, individual states like Rajasthan, Madhya Pradesh, Andhra Pradesh and Telangana are already collecting voter ID/EPIC numbers.

As The Wire reported in the first part of this series, other states like Gujarat have used their civil supplies department to mount a door-to-door campaign that collects Aadhaar and EPIC numbers.  And not to be left behind, the Delhi government also sought family details, Aadhaar and Voter IDs, purportedly for detecting whether students from other states are studying in local city schools.

This means that incumbent state governments can already mix and match hundreds of data-points with voter ID information. This concern isn’t just theoretical: for instance, in Hyderabad, city police can run a search query on “a name” and obtain all the above information, through its ‘Integrated Information Hub’. Other state databases have equally capable and functional search mechanisms.

This raises a number of questions:

1) Is it possible to ascertain if incumbent state governments and political parties are mixing and matching resident data with voter information and using it for election campaigning?

2) Who does this data belong to? Should chief ministers of state governments hand over pen drives of detailed beneficiary data to political parties? Will this prove to be disadvantageous for opposition political parties?

3) Should centralisation of digital data, when combined with age-old booth management techniques, be a cause of concern? And if so, what should the Election Commission do?

If the Election Commission only listens to India’s political parties, it might want to link Aadhaar to electoral rolls. It has already indicated that it prefers do so in a case pending before the Madras high court. Such a move however has potentially negative consequences, as it lays the groundwork for micro-targeted voter communication.

The Election Commission itself is well aware of this possibility and had asked Google, Twitter and Facebook’s  help in avoiding this situation.

At the heart of the democratic process is exercise of free choice and the EC should strive to protect the choice as far as possible. If it turns a blind eye towards data treasure troves such as state resident data hubs, then it would be slipping up in its constitutional duty to ensure free and fair elections.