How BJP Overshadows Dates Related to Ambedkar and the Constitution

The Sangh parivar detests the Constitution and Ambedkar. So much so that, they go to the extent of celebrating a day on which millions mourn and pay homage to him.

Millions of Dalits across the country will pay homage to Dr B.R. Ambedkar on his death anniversary on December 6. Many will travel to Chaityabhoomi in Mumbai, where his last rites were performed

Only two weeks separate November 26 and December 6. But the difference couldn’t be sharper. The former denotes Constitution Day, an anniversary of adaptation of the India’s Constitution. The latter the destruction of the very foundation of it by the BJP, Shiv Sena and the Sangh parivar.

Dates are important as they reveal historical events. But according to memory grandmaster James Ponder, if you want to memorise dates and events, it needs to be associated with an individual image or information that you can recall well.

Also Read: Lessons for Today in Ambedkar’s Last Address to the Constituent Assembly

We cannot forget January 30, October 31 or May 21 as Mahatma Gandhi, Indira, Rajiv Gandhi were assassinated on these dates respectively .

But how do we remember December 6? We remember it more as the anniversary of Babri masjid’s demolition than as the death anniversary of Ambedkar. That is because BJP and its allies chose December 6 to demolish Babri masjid in a systematically executed conspiracy that proved to be one of the biggest blots on our democracy.

Seeds of anti-Muslim sentiment were sown for political purpose during the Ram mandir agitation. Since 1992, TV images of people wielding iron rods atop Babri mosque further reinforced the date in our mind.

By erasing the mosque, BJP achieved two objectives on the same day. While it symbolically tried to demolish the Constitution by disregarding law and order, it chose Ambedkar’s death anniversary to do it.

Clearly, the BJP is playing “good cop-bad cop” to hoodwink the people.

Every year since 1992, the Sangh parivar celebrates December 6 as shourya diwas or vijay diwas, suggesting that it was no coincidence. The VHP, which celebrated the event nationally in 2017, calls it a moment of glory, honour and courage. This year too, the Bajarang Dal and the VHP have planned shourya diwas celebrations.

Clearly, the Sangh parivar chose December 6 to demolish Babri not despite the relevance of the date, but because of it.

Prime Minister Narendra Modi leaves no opportunity to invoke Ambedkar, especially during the elections. In his Man ki Baat radio speech on November 26, Modi mentioned that Ambedkar’s mahaparinirvan diwas (death anniversary) was on December 6. But who will forget that Modi was part of the rath yatra, led by L.K. Advani, that concluded in the destruction of the mosque on this day? 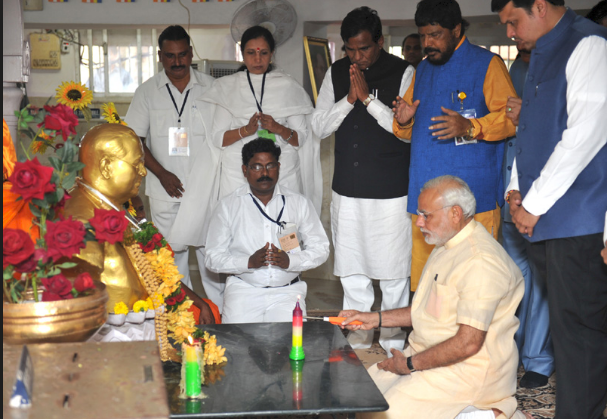 Even as the prime minister, Modi has never reined in any of the BJP ministers or MLAs who talk against the Constitution.

Clearly, the BJP is playing “good cop-bad cop” to hoodwink the people.

Union minister Ananth Hegde had publicly said last year that the BJP was here to change the Constitution, but he was not sacked.

This year, as important assembly elections in MP, Mizoram, Telangana and Rajasthan loomed, the VHP organised a dharma sansad on November 25. It calls this the ‘last effort’ to clear the hurdles in the construction of a Ram temple. Many BJP leaders attended the event.

Also Read: A State That Fears the Constitution

Last year, the event was organised on November 24, 25 and 26 in Udupi, Karnataka, to deliberately overlap with the Constitution Day. Notice the use of sansad. The move from sansad (Lok Sabha) to dharma sansad is importantly worded. The suggested ‘hurdle’ in the way of the Ram temple is the Constitution. How the BJP uses dates for its programs

Since it has come to power, the BJP has tried to associate dates with its own leaders and agenda – whether its good governance day (December 25) on A.B. Vajpayee’s birthday or inaugurating the statue of Sardar Patel on Indira Gandhi’s death anniversary (October 31). The BJP is leaving its mark on all important dates. Even Vajpayee, as prime minister, chose the birth anniversary of Gautam Buddha to carry out a nuclear test on November 11, 1998. The media obliged by saying, “And the Buddha smiled”

The BJP’s opposition to the Constitution

The BJP and the Sangh parivar have been opposed to the very idea of our constitution. As the Constitution was finalised in November 1949, the RSS’s mouthpiece Organiser (November 30, 1949) read:

The worst about the new constitution of Bharat is that there is nothing Bhartiya about it. ..There is no trace of ancient Bhartiya constitutional laws.… Manu’s Laws were written long before… To this day his laws as enunciated in the Manusmriti excite the admiration of the world and elicit spontaneous obedience and conformity. But to our constitutional pundits that means nothing.

Also Read: They Deify Ambedkar But Don’t Want People to Read His Books

The BJP has tried to change the fundamentals of the Constitution many times. In fact, Vajpayee had formed a Constitution review committee to alter it.

The Sangh parivar detests the Constitution and Ambedkar. So much so that, they go to the extent of celebrating a day on which millions mourn and pay homage to him.