How BJP Leaders Are Using Ramleelas to Further Their Political Agenda

The Ramleela, as a cultural platform, has arguably been a popular spot for political luminaries to influence prospective voters for decades. 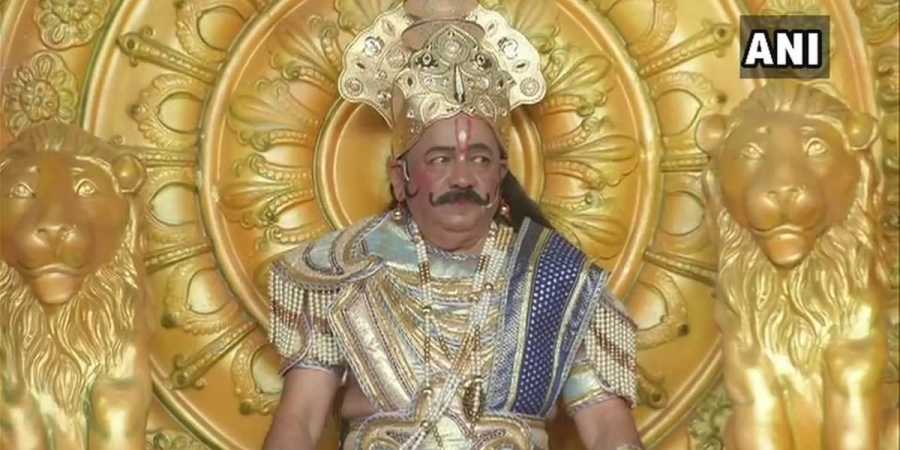 On October 13, the famous Ramleela at Red Fort had Union ministers and other star campaigners in the garb of famous characters from the Ramayana. Dressed as Lord Janak with a shining golden crown and finely twirled moustache, Union minister for environment Harsh Vardhan, in one of his opening scenes, woefully cursed the kings who failed to lift the holy bow of lord Shiva in Sita’s swayamvara. His dramatic pauses and near-perfect diction had almost cast away the usual kurta-clad image, until he started plugging in ‘moral thoughts’ that even the great sage Valmiki failed to include in the narrative. With intermittent references to ‘save the environment’, swachhta, seva and so on, his poetic dialogues didn’t seem too different from a campaign speech. In the same vein, Delhi Bharatiya Janata Party president Manoj Tiwari, who played the role of Angad a year ago, in September 2017, digressed from the script to refer to the surgical strikes, rousing loud applause from the audience.

The Red Fort Ramleela is annually organised by the Luv Kush committee, and usually popular artists from the Indian film and entertainment industry play the characters. However, for the past couple of years, politicians have also begun to take out time from their tight schedules to essay the roles of famous characters like Himavat, Janak, Angad etc. This time around, Harsh Vardhan played Lord Janaka and Union minister of state for social justice, Vijay Sampla, donned the costume of marginalised character Nishadraj, who is redeemed by Lord Rama towards the end of the story.

The Ramleela, as a cultural platform, has arguably been a popular spot for political luminaries to influence prospective voters for decades. Last year, in 2017, Prime Minister Narendra Modi inserted ideas of nation building while talking about the significance of festivals at the Ramleela organised by the Luv Kush committee. Similarly, in 2016, he attended Lucknow’s famous Aishbaag Ramleela ahead of the UP elections and conveyed the BJP’s stance against terrorism to a horde of spectators. Opposition parties criticised the BJP for ‘hijacking’ a religious event to reap political benefits. L.K. Advani, who is a regular attendee of Shri Ram Bhartiya Kala Kendra’s Ramleela, is often seen glorifying the ‘Ramrajya’ in his closing remarks at the event.

The linking of Dussehra and politics has also reportedly percolated to small-scale Ramleelas. In September 2017, the Ramleela in Dwarka Sector 10 had an effigy of China alongside Raavan and others in the backdrop of the Doklam stand-off. The Indian Express quoted the organiser and ex-BJP councillor from Matiala as saying, “We have so much trade with the Chinese but they repeatedly encroach on our territory. We have decided to set fire to their effigy to send them a message. Last year we did the same with Pakistan.” The event also had big posters of the prime minister’s Swachh Bharat initiative and large cutouts of army men with taglines like “Do your duty for the country and stop buying Chinese products”.

Also read: In Ayodhya, the Ramleela Tradition Is Losing Its Mass Appeal

Among the political parties in the country, BJP and its associates seems closest to Ramleela celebrations. Commenting on BJP’s close association with Ramleelas, Neelanjan Sircar, senior fellow at the Centre for Policy Research, was quoted by Hindustan Times as saying, “I don’t think this version of the BJP believes in hiding its underlying ideological worldview. We have often thought of political parties as playing it safe, playing it towards the middle, being cautious of associating itself with religious imagery. But given BJP’s clear bent, it makes perfect sense for key faces within the party to display Hinduness in this fashion.”

Badri Narayan, in his book Fascinating Hindutva: Saffron Politics and Dalit Mobilisation, talks about how the BJP and its affiliates use the Ramleela to influence the collective psyche of locals in Chittora, Uttar Pradesh. The annual Ramleela in Chittora always ends with the popular ‘Suheldev Bavni’ song, which describes Suheldev’s aggressive attack on Salar Ghazi Mian, nephew of Mahmud Ghaznavi, to protect the Hindu religion from the onslaught of turks. Suheldev, who traditionally belonged to a lower caste community, is thus appropriated by dominant groups who portray him as the Hindutva crusader against Muslim invaders. A popular myth of Chittor is thus seamlessly tied to the Ramayana to communalise the battle between Suheldev and Ghazi Mian, says Narayan.

Among these campaign-like Ramleelas, there are some unpopular ones, far away from the limelight, where suppressed voices are making their own noise. For instance, on October 10, 2018, men who played Ram and Lakshman staged a dharna next to the Dhanesra pond in Varanasi to protest against the unhygienic conditions of the waterbody, delaying the event for two hours. The dharna prompted the president of the Laat Bhairon Committee, Ram Avtar Pandey, to reach out to the municipal commissioners, who said that the pond would be cleaned soon.

Similarly, in September 2017, the Ramleela of Ramnagar in Varanasi had devotees and local officials collectively expressing their dissent against the government. The government had promised free buses to ferry people to the Ramleela ground, but no transport was provided, compelling people to walk long miles on their own. “The BJP seniors do not heed us. Everything is just promised but invisible on the ground. I have been reading the papers and also got an ad published in the Gandiv, a local daily. But I have not seen the bus myself. Its specially bad for the aged who have to walk for so many kilometres to reach the Ramleela,” BJP ward president from Maidagin, Gopal Sahni, told Indian Express.

The expression of anger against the authorities in both these instances suggests that voices of resistance exist in some places. The local representatives don’t shy away from pointing out unfulfilled promises. In cases like these, the power balance seems to slide somewhat towards the suppressed groups. The ‘Ram’ who becomes a tool of displaying power in Delhi’s resplendent Ramleelas becomes a strong voice of dissent in Varanasi and perhaps in other regions as well.

The Ramleela culture across the country has traditionally been syncretic in nature, with people from different religions and communities participating. Muslims has been closely associated with Ramleelas as actors, writers, singers, designers, organisers etc. and continues to be so. From the Meo Jogis of Rajasthan and Patuas of Bengals to folklorists of Kerala’s Malabar region, Muslims have been an intrinsic part of Ramleelas in the country. The Ramleela in Firozabad district’s Kheriya vilage is often peppered with humorous lines like, “Tu Hindu bhoot hai ki Musalman? Bata…bata” to convey the message of communal harmony.

Historian Rana Safvi talks about Bakshi ka Talab’s Ramleela in Lucknow, where all the main characters are played by Muslims. It was started in 1972 Muzaffar Hussain and Maiku Lal Yadav to spread the message of communal harmony. This Ramleela was also adapted for the radio as ‘Uss Gaon ki Ramlila’ and won the All India Radio’s Lahsa Kaul Memorial Communal Harmony Award in 2000, adds Safvi.

In South India, Kerala’s Mapilla Ramayanam incorporates local Muslim culture in the narrative to make it more relatable to the audience. Apart from using Arabi-Malayali dialects and referring to shariat in some scenes, Raavan is called Sultan and Shurpanakha’s friend is named Fatima. The Malabari Ramleela and other ones where Muslims play pivotal roles therefore belies the fundamentalists (of both Hindu and Muslim communities) who try to fan enmity between the two communities.

The Ramleela is one of the most popular cultural festival in the country, in which people from across communities come to participate. However, the BJP and its affiliates have been trying to turn it into a campaign spot where issues of nationalism and communalism are trumpeted through references to terrorism, surgical strike, Doklam etc. Setting aside Ramleela’s traditional syncretic culture which continues to thrive in some regions, these dominant groups have been using it for their own political benefits. They are seen wearing heavy costumes of Ramayana’s idealistic characters to preach moral values which they hardly practice. Perhaps Harsh Vardhan, who spoke of saving the environment on stage at Red Fort’s Ramleela this year, shouldn’t have taken off his heavy costumes because at least, for once, he took the issues of sanitation and cleanliness seriously.

Tanya Jha is an intern at The Wire and is a post graduate in media studies from Jamia Millia Islamia University.