BJP workers are upset that party tickets have gone to 'turncoats'. Voters too are left confused by the movement of leaders across party lines. Arambagh (West Bengal): Immediately after you take a right at the Goghat crossing towards Arambagh in Hooghly district, the three-storeyed Bharatiya Janata Party (BJP) office stands out for its sheer flashiness. Around 50 activists have gathered around the three saffron-coloured GPS-enabled vans fitted with LED screens, which are being used all over the state to air Prime Minister Narendra Modi’s speeches.

At the first instance, it appears to be a regular campaign day for the party – but it is not.

The BJP activists have gathered here in protest against the party’s decision to field a former Left Front leader and All India Forward Bloc (AIFB) MLA, Bishwanath Karak, who polled second to the Trinamool Congress’s (TMC’s) winning candidate Manas Mazumdar in 2016.

“We are the ones who built the party here. We have been BJP members for the last 32 years. Yet one of our own was not fielded,” said a BJP district farmers’ union leader, who requested not to be named.

“Throughout our political life, we have been opposing Left Front leaders like Bishwanath Karak. They have oppressed us to no end. And now when we stand a chance at winning the seat, our own party has betrayed us,” he said. Another worker from the group insists that the Left Front activists who had voted for the BJP in the 2019 Lok Sabha polls to defeat the TMC will likely withdraw their support because even they feel cheated by Karak’s disloyalty.

The BJP’s infighting, which has been substantial ever since the party fielded several turncoats or “outsiders”, was the most visible in Hooghly district. Several BJP offices in the district were ransacked by BJP aspirants and activists. Somnath Maitra, a party leader in the district, was even beaten up by his party members.

The confusion in the BJP ranks appears to have trickled down to the party’s day-to-day campaign. Several village-level BJP activists feel sidelined in Goghat. “The party is sending all resources to Karak’s associates. We have completely been shunted out,” said one BJP worker in the group. Across constituencies of Hooghly, BJP’s campaign appears to be much paler than the TMC’s. Those who have been associated with the party for a long time have now receded into the background, while the new partymen, mostly loyalists of the turncoat nominees, are seen at the forefront.

The sudden change of mood within the saffron party, the TMC hopes, may reverse its fortunes. In the 2019 Lok Sabha polls, the BJP had performed exceedingly well in the region, winning the Hooghly seat, while losing Arambagh to the ruling TMC’s Aparupa Poddar by a margin of mere 1,142 votes. This time around, the party has high hopes from both constituencies, said Saumitra Khan, BJP MP from Bankura.

“Had it not been for a few EVMs which were not counted because of a controversy, we would have also won Arambagh, along with Hooghly,” Khan, who himself switched over from the TMC to BJP before the 2019 Lok Sabha polls, told The Wire.

Interestingly, Khan’s wife Sujata Mondol is contesting on a TMC ticket from the Arambagh constituency. When Khan had shifted to the BJP, Mondol had publicly disassociated with his decision, and chose to remain in her parent party.

Against such a political backdrop, the TMC has put in all its energies in conducting public meetings and door-to-door campaigns. It has also fielded leaders with a clean record, turning the contest in Hooghly into a neck and neck fight. Yet, having seen many of its leaders switching over to the BJP ahead of the assembly polls, the TMC had to almost rebuild its organisation and is currently facing one of its biggest crises in what was one of its strongest bastions. It is here that the TMC rose to the limelight by extending its support to the 2007 people’s movement against the Left Front government’s forcible land acquisition in Singur for the Tata Nano plant.

Also read: How Equations Have Changed in 3 Places That Had Brought Mamata Banerjee To Power

The confusion within both the prime contenders seems to reflect even in the people’s mood.

A potato farmer, Ratan in Singur summed up this prevailing sentiment quite aptly. “Our MLA from TMC, the 89-year-old Rabindranath Bhattacharjee, defected to the BJP at the last moment. Now he is the BJP’s candidate. TMC, on the other hand, has fielded Becharam Manna, the face of the anti-Tata Nano protests, from the Singur constituency. He is known to be the most accessible person in the area. A lot of people were swinging towards the BJP two months ago. But now we do not know what to do,” he told The Wire.

“TMC leaders had become very unpopular over time in the region. Now we see many of them have switched over to the BJP ahead of the assembly polls,” he adds.

Similar multi-layered indecisiveness marks the mood in other districts too. In the Muslim-dominated Khanakul seat, a majority of the people believed that chief minister Mamata Banerjee is the best option for West Bengal, but are concerned about the new entrant and Left Front’s ally, the Indian Secular Front. By joining the electoral race, ISF, led by Abbas Siddiqui who comes from the caretaker family of the revered Islamic shrine Furfura Sharif, has created a distinct dilemma in a significant section of young Muslims.

“I want to vote for ISF but my elders tell me that ISF may cut into TMC’s votes, which may effectively help the BJP. I am fed up with TMC leaders’ dadagiri (high-handedness),” said Ashraf, a young graduate, in Chunai village of Khanakul constituency.

Similarly, lottery seller Partho Das in Belechuan village from Haripal constituency said, “We wanted to vote for a change, but the BJP has fielded a former TMC leader, Samiran Mitra, here. If we vote for BJP, it will be like essentially voting for the same people with whom we were annoyed.” Yet, despite such unclear trends, a large section of people appeared to want “poriborton” or change, and saw the BJP as the only force which can challenge the ruling TMC. The BJP has successfully created a political narrative against alleged corrupt lower-rung TMC leaders who “would not even listen to the chief minister Mamata Banerjee”.

When asked about the dissension within the party in Hooghly, a senior-level BJP leader, who did not want to be named, told The Wire, “We have been successful in creating substantial support for our party in Hooghly. But we didn’t want to take any chances since the belt has also been a TMC stronghold. So we relied on the political support of individual leaders from the region who wanted to join the BJP. We are confident we will do very well in the district.”

The leader may not be off the mark, as a majority of the Scheduled Castes groups, electorally influential but one of the poorest sections of the population, have shifted entirely towards the BJP. In the seven assembly seats out of 18, a large number from different caste groups classified as Scheduled Castes spoke in favour of the BJP, and pitched themselves against the ruling TMC. “Look at our condition, we have no jobs, we have no permanent incomes. For how long should we rely on Didi’s bhatta (welfare funds),” said Pronoy Das, 26-year-old agricultural worker, in Pursurah. He added, “Eibare, Jai Shri Ram (This time, it will be Jai Shri Ram).”

“Aaj porjonto ekta maati’er baari tey thaakchi. Amader jonno kichu hoye ni. Tai ekta notun party ke chance ditey chaichi. (We are still living in a mud house. Nothing much was done for us. That is why we are trying to give a chance to a new party),” said Rashmoni in Balai Chawk, Arambagh. 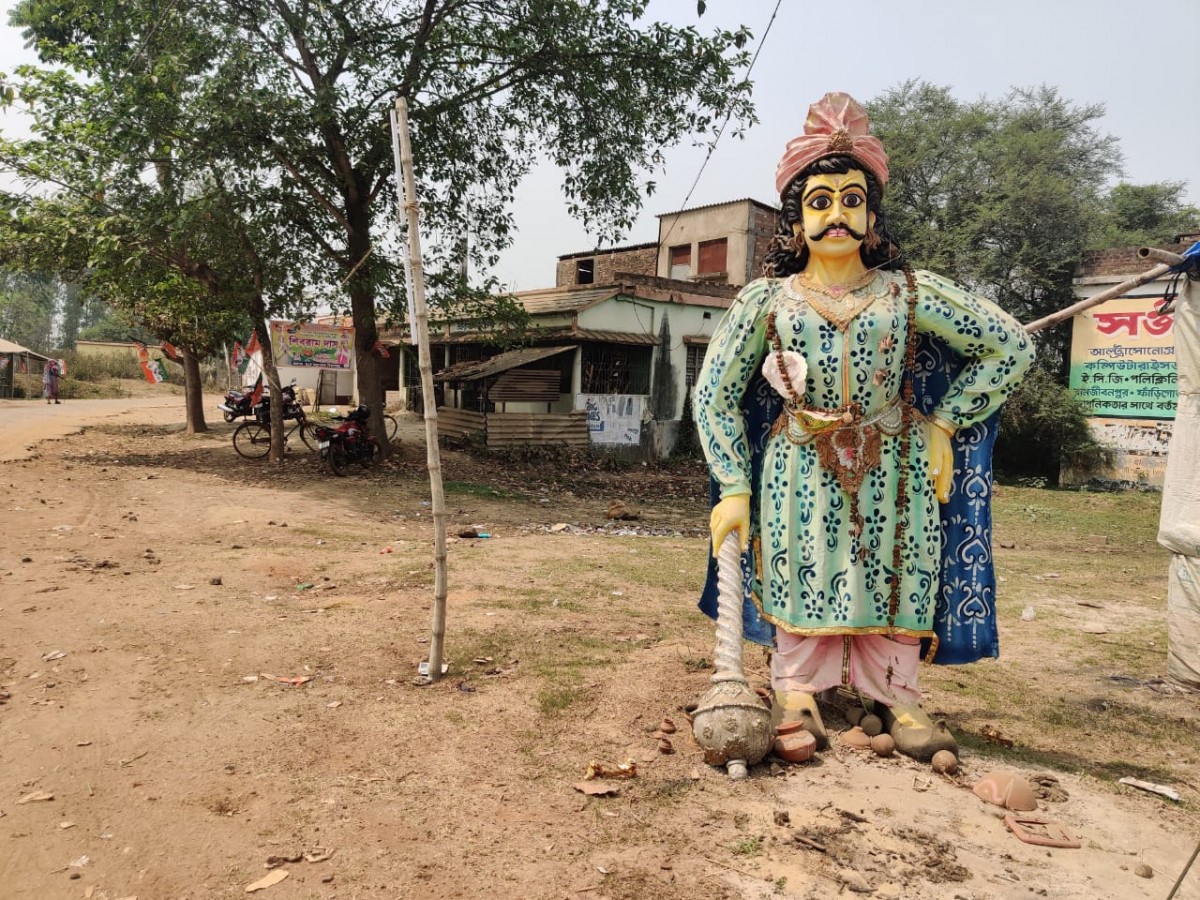 Statues of Bhim, who the ST and SCs revere, are present across Hooghly district. Photo: Author provided

Backed by the Scheduled Caste groups, also the biggest caste block in the district, the BJP engineered a large number of defections in the TMC and the Left Front to break their back, and is currently relying upon these turncoats to bring the additional votes to defeat the TMC.

The TMC, on the other hand, expects that if around 16% Muslims support it, and if the party manages to retain its hold over even half the Hindu population, it will be in a position to stage a good fight. This reflects in the TMC’s campaign in the region. The Wire attended at least three public meetings of TMC leaders. In all of them, TMC leaders concentrated on attacking the BJP with an assumption that a large number of people may swing towards the BJP.

“All of you are thinking BJP is good. But let me tell you, it has kept no promises at the Centre. On the other hand, Didi has tried to fulfil all her promises,” a block-level leader at Haripal said, while addressing a crowd of around 50 people. He went on to list the TMC government’s welfare schemes.

Moreover, most of the TMC leaders have attempted to build a narrative that Mamata Banerjee is going to come to power. “Do whatever you may, no one can replace Didi. She is winning again,” many TMC activists would tell you in Hooghly, if you ask them about BJP’s spurt in the area.

Although confusion prevails over candidates at the moment, the BJP hopes that if voters vote on expected lines, it would sail through in Hooghly. “In Bengal, voters vote for parties, not for candidates,” BJP MP Saumitra Khan said.

The TMC has tried to correct its course, and is running a spirited campaign in the area. It has fielded Becharam Manna, his wife Karabi Manna, Sujata Mondol and many other leaders with a good image. The BJP, too, has fielded its national leader Swapan Dasgupta from Tarakeswar and its Hooghly MP Locket Chatterjee, expecting to remain a step ahead in the perception battle.

Before the region goes to polls on April 6 and 10, it is clear that Hooghly is for the TMC to defend against BJP’s onward momentum, and not the other way round.