Many previous interlocutors failed because they had neither a clear-cut mandate, nor the authority to deliver anything to anyone. 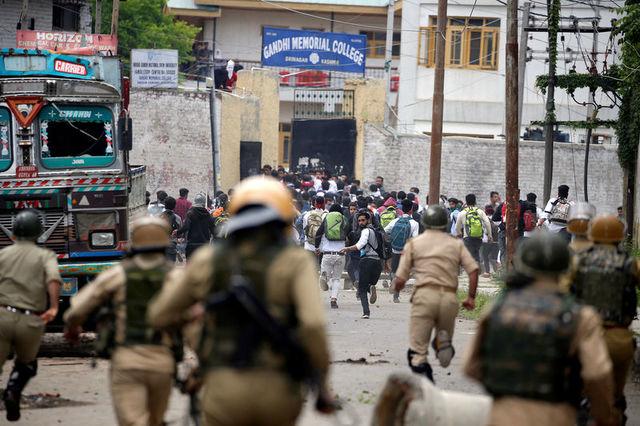 You could draw very wrong conclusions from the fact that the Narendra Modi government has appointed former Intelligence Bureau director Dineshwar Sharma as the interlocutor  for Jammu and Kashmir. You could, for example, believe that the government is bent on securitising what is essentially a political issue, or that the government will only repose its trust on someone like Sharma who comes from the deep end of the deep state.

For the record, Sharma served in J&K in the early 1990s and has since also headed the Kashmir desk in the Intelligence Bureau, and, of course, dealt with Kashmir as IB chief. So, there should be no doubts about his knowledge of the subject and the individuals he is likely to deal with.

Union home minister Rajnath Singh has clarified that Sharma has a large remit and he would be free to “talk with whoever he wants to.” He has referred to Prime Minister Modi’s remarks in his Independence Day speech saying that Kashmir’s problems can only be solved by embracing Kashmiris, not bullets or abuses as the basis for the new initiative.

My own experience is that IB officers dealing with Jammu and Kashmir  have a more nuanced understanding of the issues in the state than many others. Their job, often dealing with the seamier aspects of the situation, makes them realists. This is not unique to India; in Israel, too, intelligence chiefs have tended to have a more realistic rather than an idealistic or ideological view of the situation.  The chair of the ruling Israeli coalition lamented last year that “over the years the heads of Shin Bet and Mossad become leftists.”

This is not to argue that Sharma is leftist or even dovish – we don’t have enough data to comment on that. So while we have the example of A.S. Dulat who may be put in the dovish category, we also have the example of M.K. Narayanan or Ajit Doval, the current national security adviser, to show that they can remain hawkish as well. But this is merely to argue that we should not pre-judge Sharma because of his background.

A strategy, of sorts

What the government is up to is fairly clear. It has operated with the belief that past policies of dealing with the issue were too soft. There was need to show the Kashmiris that militancy will not work and that they could not expect any concessions on the basis of the gunmen, either Pakistani or Kashmiri. So after hammering the separatists by systematically killing their militants, moving aggressively against their overground workers (OGW, in IB parlance) curbing the stone-throwers, it has signalled that it is willing to undertake a dialogue. The conditions in the Valley have been grim in the past year, not just for the militants, but their supporters and the average citizens. What the government seems to be saying is that “we can give you more of this, but here is an opportunity for a way out”.

There is a parallel of sorts in the history of the Vietnam war when the new Nixon administration prolonged the Vietnam war for nearly five years just because he wanted to show that by being tougher he could  get a better deal from North Vietnam. Hundreds of thousands of people, mainly Vietnamese died, yet in the end, the North Vietnamese did prevail. Force alone can only take you that far.

So whether this new government initiative will yield anything worthwhile is difficult to forecast. Globally, there have been two successful ways of dealing with militant separatism – crushing it utterly by military means, or dealing with it patiently and systematically through a “rule of law” approach. The Indian way has, somewhat messily, combined the two. 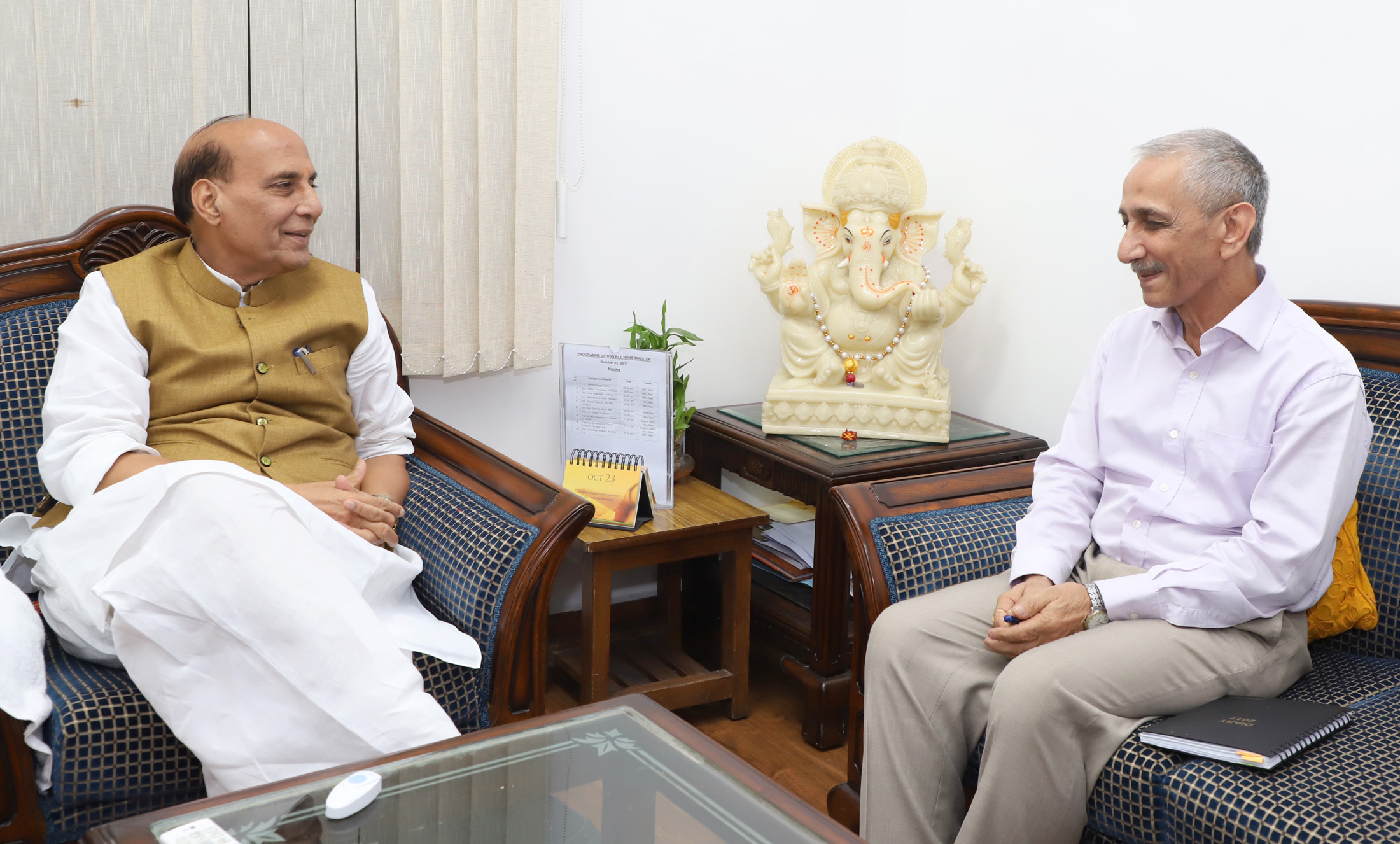 Dineshwar Sharma, former director of Intelligence Bureau, calling on Union home minister Rajnath Singh after being appointed as the representative of government of India to initiate dialogue in Jammu and Kashmir, in New Delhi on October 23, 2017. Credit: PIB

The militancy has been around for more than 25 years now. The Indian state’s response has hardly been lenient – more than 20,000 militants have been killed since 1990, along with nearly 15,000 civilians. Yet, the separatist idea persists, at least in the Valley of Kashmir.  Of course, in great measure the violence has been a result of the Pakistani support and aid to the militancy which has included not just training and arms, but also sending in personnel into the Valley. But it is also a consequence of the missed steps in India’s political handling of the situation. Its not that India has not tried the political approach – it restored the state government, has held elections regularly and so on. It has attempted mediation through interlocutors. But these have never been properly followed through.

Sharma follows a long line of intermediaries which includes people like Rajesh Pilot and George Fernandes who, while in government, sought to act as a political bridge to reach out to the separatists. The first real interlocutor, K.C. Pant was appointed in  2001,  but the mission soon wound down with India and Pakistan close to war following the attack on parliament in December that year. Before this, in August 2000, there was the episode of the ceasefire in the valley and an aborted dialogue between the Hizbul Mujahideen and a government delegation headed by Union home secretary Kamal Pande. Those the talks collapsed, as much from sabotage within as the inability of the two sides to manage the process.

In 2002, a Track II Kashmir committee was set up under the leadership of Ram Jethmalani, with journalists Dileep Padgaonkar, Jawed Laiq and M.J. Akbar, former law minister Shanti Bhushan, Supreme Court advocate Ashok Bhan, retired IFS officer V.K. Grover and jurist Fali Nariman.  But this, too did not get anywhere. In 2003, the government once again appointed an interlocutor – N.N. Vohra, former home secretary, who continued on the job till being appointed governor of the state in 2008, a position he occupies even today. Various other players entered the game of trying to find a solution to the problem – Arun Jaitley, former R&AW chief A.S. Dulat and ORF founder R.K. Mishra, but to little avail.  In between, the Union home minister and deputy prime minister himself sought to open a line to the separatists in January 2004. But by this time, the government was in election mode and little came of this.

The last set of official interlocutors, appointed in October 2010, were the trio Padgaonkar, Radha Kumar and M.M. Ansari, who came out with a report which was an amalgam of a variety of proposals that had been doing the rounds of the state for decadesand on which the Manmohan Singh government simply refused to act.. The concerned citizens group led by Yashwant Sinha was active in 2016 and 2017. The extent to which they had any kind of official backing or sponsorship is not clear. Their observations and remarks on the situation have been trenchant and against the grain of official policy. Sinha’s own estrangement from government has probably ensured that the reports of the group which were submitted to the government were simply ignored.

Many of the interlocutors failed because they had neither a clear-cut mandate, nor the authority to deliver anything to anyone. They remained hostage either to New Delhi’s pusillanimous approach or Islamabad’s shenanigans. Some of them simply lacked the requisite credibility while in the case of others, the ISI, through its various instrumentalities, prevented any positive outcome. In some instances, the appointment of interlocutors was cynically aimed at simply kicking the can down the road rather than resolving the problem.

In that sense, Sharma goes in presumably with the authority of the government which has adopted a different approach – one based on hammering  Kashmiri militancy with the gun and backing this up with an attack on their overground supporters through the NIA. Maybe, it will work. But it will require uncommon abilities to square the Kashmiri circle. Sharma is not only negotiating with the separatists, he will also be dealing with the hawkish BJP in the state which is part of the government and resolutely opposed to any concessions to the separatists. But, logic would suggest that unless he has something to offer, there will be no basis for negotiation. And from the perspective of the government, it is difficult to see what he could, indeed, offer.

There is, of course, the big elephant in the room—Pakistan. Like it or not, any solution of the Kashmir issue requires a two track process involving the domestic separatists and the Pakistanis. Despite our best efforts, Islamabad retains the ability to play spoiler in the process through its jihadi proxies. But as of now, New Delhi is firmly against any diplomatic process with Pakistan, so, you can be sure that Sharma’s appointment will act as a red rag to the Pakistani bull. Unless, of course, New Delhi plans a parallel initiative with Islamabad.

So, there could be a larger question here: Why was he appointed in the first place? Was it to find a way out of the Kashmiri tunnel? Or is it a means of ensuring that there is no unwanted attention from the United States towards the government’s hardline policy in the Valley? In other words, is it a tactical move, aimed at buying time for the government to undertake what Rajnath Singh, somewhat unfortunately, termed “the permanent solution”? Or does it reflect a change of heart in the Modi government’s approach to Kashmir?