It is clear that the alliance needs to focus on the 58% of voters who did not vote for BJP this election. 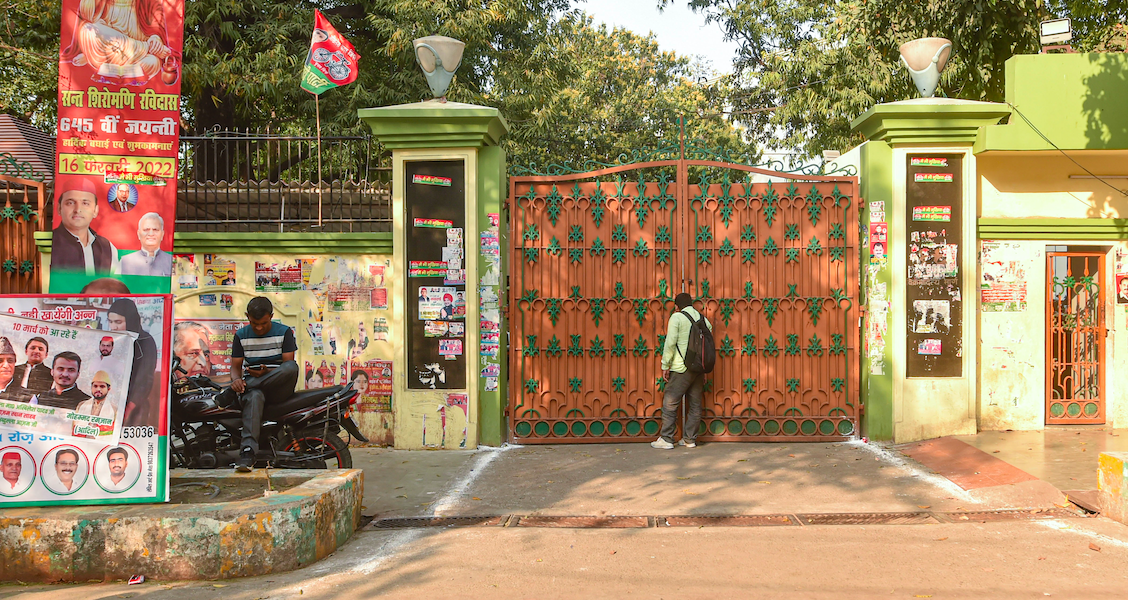 A view of Samajwadi Party office on the day of counting for Assembly polls, in Lucknow, Thursday. March 10, 2022. Photo: PTI

In the end, all that the Samajwadi Party alliance (SP+) needed in the recently concluded Uttar Pradesh elections was an extra 5 lakh votes, sprinkled right.

In the Westminster styled system that India’s democracy is, theoretically, the SP+ alliance would have trumped the Bharatiya Janata Party if it received an extra 0.6% votes from 77 seats. This is a tempting way to analyse the UP elections and surely many plans fell in place and went awry at the same time for the SP+ given the improvement that it made from the previous tally and the final loss.

While this analysis is crucial to determine seat-specific issues like “what if” scenarios involving roles of other parties and candidate selection, staying nano will be at its own peril for SP+ if it plans to stay in the fight.

BJP with a nearly 42% vote share in UP bettered its performance over the last election by 1%. The recent CSDS post poll survey in the state suggests voters’ widespread preference for the party over the candidate, implying that for those who sided with the lotus it mattered little who was holding the flower.

The mismanagement of COVID-19, Thar-Gate, unemployment, inflation, abandoned cattle were real issues backed by numerous reports that confirmed great hardships that these issues had caused to the franchise. SP+ logically cornered the BJP on them because such issues can deliver a decisive blow to the incumbent government in any democracy. Yet, the BJP voters demolished this conventional wisdom around anti-incumbency.

Is the BJP voter then far more forgiving and is it now time to resign to the fact that she votes more for reasons that are divine?

Or does it mean that the claims of BJP to deliver a better law and order environment, free ration, direct cash transfers, etc. found far more resonance than the SP+ is willing to concede?

Either way, with the BJP scoring more than 40% vote share in a state twice in a row, it is time to accept that its core voter base now stands at the same level.

While in 2017 elections BJP did receive nearly the same vote share, it was then the first time for the BJP, leaving room for scepticism about the split between the core and the floating. This election removes that doubt.

Every political entity’s nucleus is its core voter. In UP for the last three decades, the core voter’s base for all major political forces including the BJP oscillated between 20% and 24%. In this election BJP has doubled its core voter base to 42% and it is an achievement that has not come overnight.

To name call this loyal voter will be disingenuous and miss the point to derive crucial insights for course correction. Core voters are like passengers that hop on the party that is the train for a journey to the promised destination. For them, issues like economy and human development are irritants like faulty fixtures in the coaches of the train that they are travelling in. The journey towards the desired goal that is the promise keeps them enthralled and blesses them with stamina to ignore discomforts such as jobs.

While, a majority of Savarnas in the state who hopped on the BJP train decades back, the silent and non-interrupted effort of the Rashtriya Swayamsevak Sangh over the last decade to bring under its fold Dalit and Other Backward Classes through an elaborate outreach programme involving shakhas and conclaves is the oven that has dished out new core (and silent) voters for the BJP in the state.

Rallies merely act as cherries on this cake and as this election suggests even that had no use for the BJP. SP+ wrongly interpreted the absence of public enthusiasm in BJP’s rallies as a sign of BJP’s vulnerability. SP+’s campaign acted like a protest bunch shouting on a railway platform at the core voter of BJP to not board the BJP train because it is headed for a crash ahead. But the BJP’s core voter merely shrugged the insinuation and boarded it. 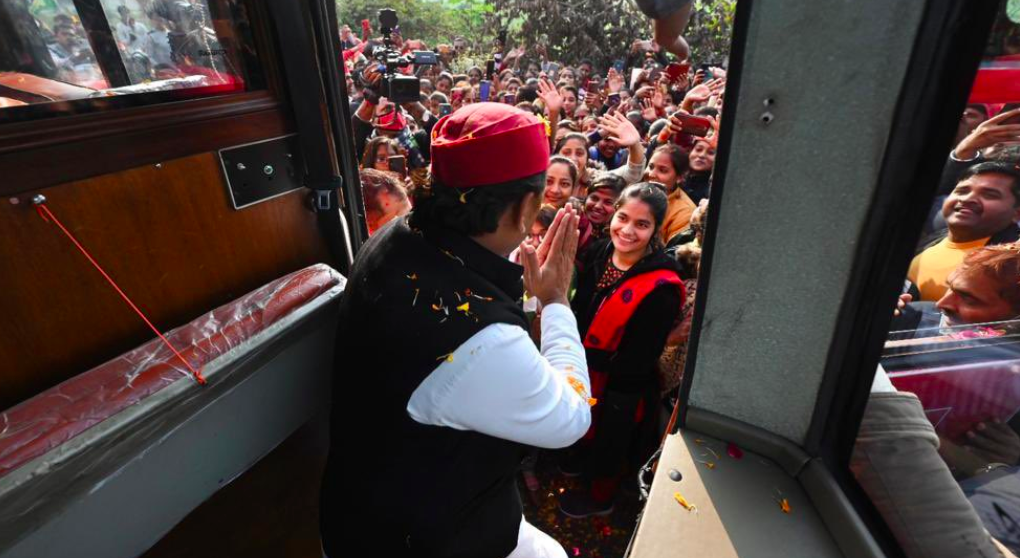 But in this act many non-BJP voters took notice of SP+’s assault and sided with it. This is reflected in a 50% increase of SP+ voter share in this election over the previous one.

SP on its own posted its best performance thus far. For reference, in 2012 when it formed the government, it garnered a 29% vote share and bagged 225 seats. However, in this election it got a nearly 32% vote share but still fell short by 77 seats.

This says a lot about the significantly changed political landscape in UP where the best of SP is now not good enough.

This also signifies that going ahead the politics of UP will be bi-polar involving 80-85% of the votes to be split between two narratives and BJP will surely be one of them. SP+ can look at this reality in two ways. It can choose to fight the BJP with the aim of reducing BJP’s vote share – a route that is expensive and already tried unsuccessfully in the last two outings or it can aim to increase its own base of core voters from the pool that is still up for grabs.

SP+ has a lot of positive takeaways from this election. Starting the political campaign merely months before the elections and to end up with 36% vote share, it has emerged as the other dominant narrative in the state. But, it will need to appreciate the machine that RSS is in being persistent, stealth, and widespread to both grow and protect BJP’s core voter.

SP+ will need to imagine its voter engagement on these lines for those who have sided with it for the first time and for those who are still available, that is the residual Bahujan Samaj Party voters.

Together, this makes up 58% of the non-BJP votes in addition to the other 40% of the total voters who skipped voting in this election. It will need to target them than to shout at the core BJP voter who will not return.

In doing so, SP+ will also need understand that this election was also victory of WhatsApp over the combined might of Twitter, YouTube and rallies. WhatsApp has emerged as a sort of Systematic Investment Plan or SIP that cannot give results in six months but delivers gains annually. For this, SP+ will need to stop its sole reliance on pre-election blitzkrieg that does not even offer enough time to communicate the manifesto to the core voters let alone size up its floating voters and convert them into core.

It will also need to realise that its cadre’s appeal is narrow to their respective communities, regions and social groups. This carries a baggage of mistrust and disinterest from those outside because they were rarely embraced earlier. It will need to build its cadre’s ability to engage with new voters who have sided with SP+ for the first time with expectations but with whom SP+’s embrace bridge is weak. This will require legitimacy and reconciliation on the ground, ability to talk solutions and vision and empathetic outreach.

The new voters of SP+ are those who did not sign up to board the BJP train but they cannot yet be termed as SP+’s core. It will need to draw appropriate lessons from how the BJP’s playbook spews core voters – a vision-selling engagement machine that is covert and non-stop.

It will also need to take heart from the fact that before BJP there was the late Kanshiram who did all of it in a non-digital way and created a core voter base that has stood the test of times (even in 2022 election, BSP’s vote share was the third highest among all political parties).

The SP+ team in the incoming state assembly will comprise 34 members from the Muslim community, 20 members from reserved constituencies and 84% non-Yadav representation. On the contrary, 40% of BJP’s representation in the new assembly will still comprise the ‘upper’ caste block. While BJP’s composition does not matter to its voter, an expanded social base of elected representatives is an unbeatable offer to the 58% of non-BJP voters. This is a phenomenal political ground that SP+ has gained and is its best bet to showcase its vision of inclusion and to remove its past baggage. This dream team can double up as mouthpieces on the ground to both hold on to the newly expanded base and to embrace new ones.

Finally, holding and expanding the alliance, is the most important takeaway for SP+. The premise that a single party can take on the might of the BJP in the state is to assume that the BJP’s core voter base can decline. The fact that it did not decline in this election given the conditions shows that it will be harakiri to plan the next move on the basis of it.

SP with the ‘plus’ is crucial to hold on to the expanded social base, to sustain the outreach and to be resource efficient. Without the ‘plus’, there is not much of a fight.

Ankur Bisen is the senior partner, Technopak Advisors, a consumer and retail advisory firm and author of the book Wasted. He can be reached at @AnkurBisen1 on Twitter.