Pushed Into Politics, Passionate Player Ever Since: The Journey of Hemant Soren

He and his family have weathered controversies in the past but now that he has a clear mandate for five years, his political future will depend on how well he administers one of India's poorest states.

Ranchi: Hemant Soren likes badminton, books and bicycles. But when it comes to politics, everything is forgotten. Then, his usually introverted self gives way to an astute straight-forwardness which proves politics is not just something that runs in his family but is his own personal passion too.

Hemant, 44, is now the chief minister designate of Jharkhand. He is set to occupy the hot seat for the second time, with a full majority this time.

“Whenever the Soren family is home, I would go and meet Guruji, Durga and Hemant. Hemant likes badminton and would often play before he joined politics. I have played with him too on a few occasions,” recalls Afroz Alam, who is the immediate neighbour of the Sorens’ in Dumka. Alam, although a member of the Rashtriya Janata Dal, is a die-hard admirer of Hemant’s father, Shibu Soren, fondly called ‘Guruji’.

Hemant was born on August 10, 1975, the second son to Shibu and Rupi Soren. His elder brother Durga’s sudden death due to a brain haemorrhage pushed Hemant into politics. As Shibu Soren was always out of the house, living the life of a political campaigner resolute upon seeing Jharkhand as a separate state, Hemant’s childhood was shaped by his mother.

The family lived between Patna (capital of then united Bihar) along with Ranchi and Dumka, although it originally hailed from Nemra village near Hazaribagh. 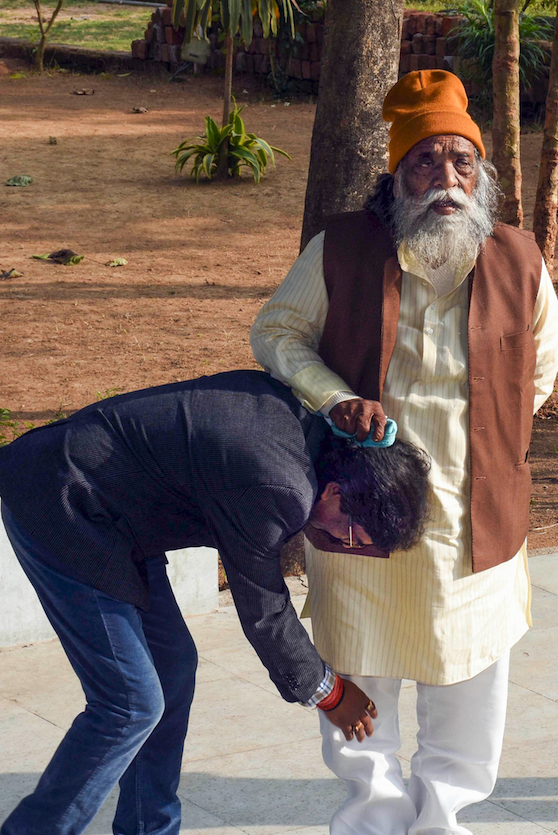 Hemant Soren bends down to take blessings from his father Shibu as the JMM-Congress-RJD combine led in the polls on December 23. Photo: PTI

Hemant completed his intermediate from Patna High School and later joined Birla Institute of Technology, Mesra in Ranchi, but would eventually drop out. By then, politics had come calling.

“Dada as a person is kind, compassionate and loving,” said Basant Soren, the younger brother of the CM designate of Jharkhand. “I would love to talk a lot about him, but I am surrounded by a heavy crowd of supporters,” he added amidst celebrations.

Hemant’s first tenure as chief minister was short — from July 13, 2013 to December 28, 2014. Jharkhand’s politics had been swayed by the Narendra Modi-wave after the general elections in 2014, but five years on, Hemant has managed to come back to power, this time with a larger majority than before.

Many old-timers in the JMM had, however, questioned Hemant’s leadership abilities. Stephen Marandi, Hemlal Murmu and Simon Marandi had quit the JMM after he was promoted in the party. But all doubts have now been put to rest.

While Stephen Marandi came back to the party and became an MLA in the 2014 elections and retained his seat this time too, Simon  came back to the JMM fold with his son in tow. Simon, an MLA during the last assembly, chose to field his son this time around –  Dinesh William Marandi, who won the Litipara seat.

Hemlal Murmu, on the other hand, permanently crossed over to the BJP, but never managed to make a comeback to the state assembly after that.

“Though Hemant never managed to work with his father as he was too young when his father was active as a statehood movement leader, he loves politics. As a child I always found him inquisitive and eager to learn,” said Pawan Kumar, who is close to the Sorens and also happens to be a JMM central committee member.

“Even as a child he never discriminated against anyone on the grounds of caste, creed, or wealth. This quality has remained with him even today and will remain,” Pawan says, adding that a word like ‘hatred’ is alien to Hemant.

Hemant and his wife Kalpana, a homemaker, have two children. The proud father is often seen taking his children to social gatherings. Hemant also has a sister Anjali and was largely away from politics until 2009, when Durga’s sudden death came as a big shock to the family, particularly his ageing father Shibu.

A few months after he joined politics, Hemant was taken to the Rajya Sabha and remained a member till January 2010. He resigned from the upper house to take up the post of deputy chief minister in the BJP-led Arjun Munda regime. But two years later, the BJP-JMM bonhomie collapsed and president’s rule was imposed in the state.

Six months on, the Congress and RJD, the two allies of the JMM even in 2019 elections, offered support and Hemant became chief minister in July 2013. He occupied this seat for one and half years.

The 2014 elections brought good tidings for the BJP and as Arjun Munda failed to win from his Kharswan seat, Jamshedpur East MLA Raghubar Das was made chief minister.

Hemant Soren, then an MLA in the assembly, played the role of the opposition leader in the house. He always shared a tumultuous relationship with Das. Das would often call the Soren family as one which looted the tribals of Jharkhand, and did nothing for their welfare. Land owned by Hemant in Ranchi, which he reportedly has bought from one Raju Oraon, came under the scanner, and allegations were made that it has been purchased by violating the Chotanagpur Tenancy Act.

According to the Act, both the seller and the purchaser have to be ‘residents’ of an area under the same police station. The Act came up in 1908, and since then, the original police stations have been divided into many smaller ones. The law does not speak of which areas are to be considered under the jurisdiction of a particular police station — the ones during 1908, or the smaller ones after the divisions.

The law is also silent on whether ‘resident’ means just ‘resident’ or ‘permanent resident’. Though Raju Oraon himself never filed a complaint in the court, Das as chief minister set up a Special Investigation Team (SIT) to look into cases of alleged violation of CNT Acts, with Hemant the prime target.

The SIT however, never gave its report.

This apart, Hemant, in 2012, had appeared in court in connection with a violation of the model code of conduct during the 2009 assembly elections.

Hemant has won from Dumka as well as Barheit — the two seats he contested from. He is likely to retain his Dumka seat as it is the prestigious mainstay of the Santhal Parganas, known to be the second capital of Jharkhand. His younger brother Basant, whom the JMM had fielded as a candidate in the last Rajya Sabha elections, is likely to be made the by-poll candidate in Barheit.