Questions About Your MP's Performance? This App May Have Answers

A new app aims to encourage voters to explore data about their states and constituencies to make informed decisions about their representatives.

With parliamentary elections just around the corner, a natural question on everyone’s mind is: How did the last government perform? It is indeed a difficult one to answer as multiple factors will have to be taken into account. Nevertheless, it is in the interest of democracy to attempt to answer this question, and one way to do so would be to analyse the functioning of the subparts.

We have made a web-based application that allows a user to compare the performance of members of parliament from different states and political parties. The app is based on publicly available datasets.

Has your MP attended parliament regularly?

This is a basic question that voters may ask. The impact is most significant if the voters can themselves look at the data and derive conclusions. We analysed data on MP attendance in the parliamentary sessions from June 2014 to July 2018, collected and disseminated by PRS Legislative Research. The detailed findings can be found in our app.

Some of the observations are striking. Excluding ministers, there are as many as 34 MPs who have attended less than half of the sittings, with Amarinder Singh (Amritsar) and Adhikari Deepak (Ghatal) having attendance as low as 6% and 9% respectively. Almost a quarter of the MPs from West Bengal and two-thirds of the MPs from Jammu and Kashmir have less than 50% attendance. 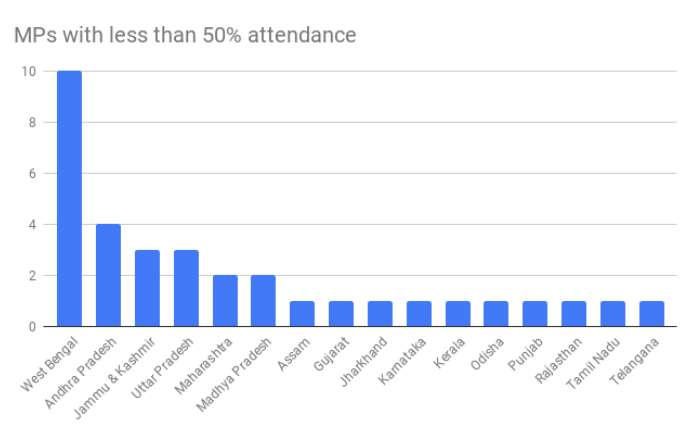 Furthermore, 178 MPs have attended more than 90% of the sessions. Of these, 140 are from BJP, ten are from INC and seven are from the BJD.

Which state MPs attended parliament the most?

Both MPs from Manipur, the MPs from both Mizoram and Nagaland and one of the two MPs from Meghalaya have more than 90% attendance. Among the relatively bigger states, MPs from Delhi, Rajasthan, Jharkhand, Uttar Pradesh, Himachal, Madhya Pradesh, Gujarat and Bihar attended the parliament more regularly than those from other states. 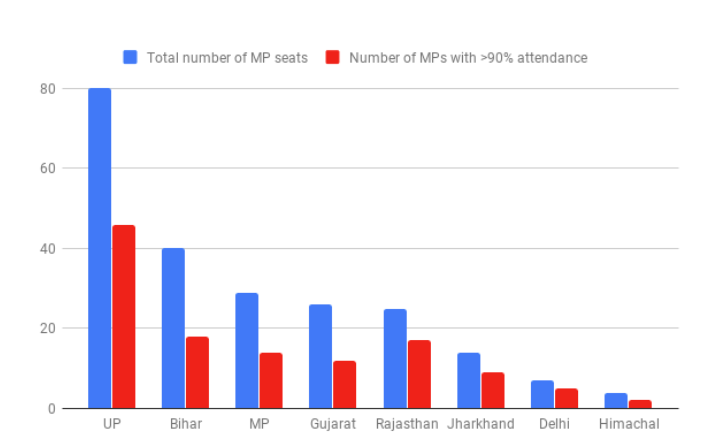 A significant part of the daily proceedings during a parliamentary session is the ‘Question Hour’, the first hour of every sitting. As stated on the website of the parliament, “The Government is, as it were, put on its trial during the Question Hour.” By actively asking questions, MPs elicit valuable information about governmental policies from ministers, thus helping make the governing process more transparent.

More than a thousand questions are posed per sitting of the Lower House on average. Questions are answered by the ministers in either written or verbal format. Yet, a considerable number of questions go unanswered for want of time and for other less gratifying reasons.

Has your MP been actively asking questions?

The data from PRS on MP performance until July 2018 reveals some interesting patterns. For the purpose of this analysis, MPs who served as ministers or speakers for any part of their term have been excluded from consideration, since their main role entails answering questions or moderating sessions.

Of the 545 members of parliament, as many as 44 never asked a question in this four-year period, and 76 of them have asked fewer than ten questions. Even if we exclude MPs from the ruling BJP, assuming they may be bound by their party affiliation and ask fewer questions, 57 MPs have asked fewer than ten questions each. They make up more than one-tenth of the strength of the parliament. Twenty-one of these MPs are from West Bengal alone.

On the other end, 60 MPs have asked more than 500 questions each in this period. Nine MPs from Maharashtra (4 SS, 3 NCP, 1 INC, 1 BJP) form the top of this list, having asked an average of more than 900 questions. 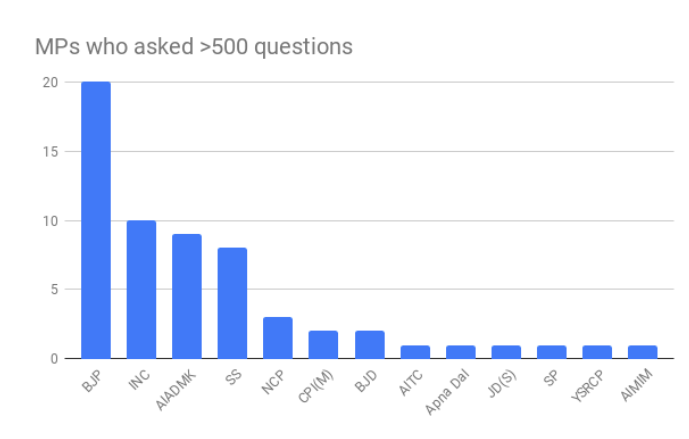 Although several shuffles have taken place in the NDA regime, including creation of entirely new ministries like AYUSH and Skill Development and Entrepreneurship, and rearrangements of portfolios into separate ministries, the core ministries remain the same, and we compare how these have performed in terms of answering questions during the Question Hour during UPA 2009-2014 and NDA 2014-2019 governments.

How did NDA government fare compared to the preceding UPA in answering questions?

The first striking feature is that when compared to the UPA, the answering percentage for every ministry has gone down in the NDA government with one exception being the Ministry of Science and Technology, which has seen a marginal increase.

For as many as 20 ministries, the UPA government’s answering percentage is higher than that of the NDA government by more than 20 percentage points. The Ministry of Petroleum and Natural Gas presents the starkest difference. Under Murli Deora, Jaipal Reddy and N. Veerappa Moily, the ministry answered 5,013 out of 5,733 questions from 2009-2014. 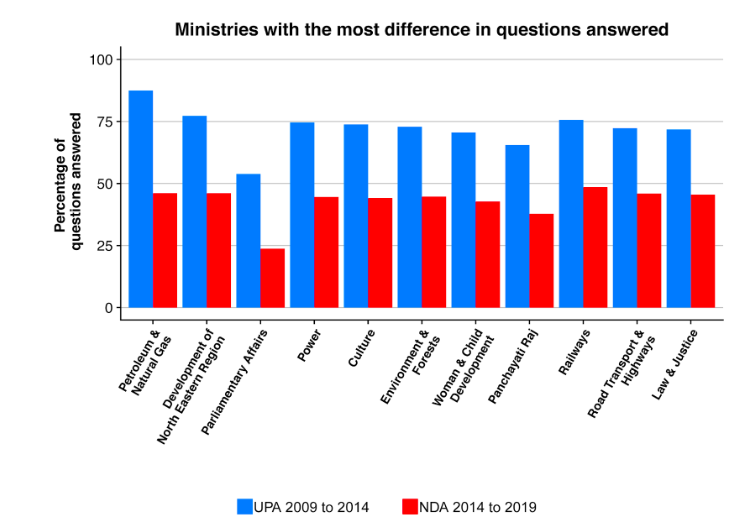 In conclusion, our analyses revealed that although there was high attendance by members of parliament from several constituencies and an increase in questions to ministries, the NDA government answered fewer questions as compared to the previous UPA government.

Besides these broad patterns, we intend that users themselves explore the application and interpret data from their states and constituencies to make informed decisions about their representatives.

Shiva Chidambaram is a PhD student in Mathematics at The University of Chicago (US). Neha Mohan Babu is a PhD student at Syracuse University (US) studying plant-animal interactions. She tweets at @nehamohanbabu. Viraj Doddihal is a pre-doctoral researcher at Stowers Institute of Medical Research studying animal tissue regeneration.