In Haryana, an Age-Old Fight Over a Patriarch’s Legacy

The sons and grandsons of Devi Lal clash over who will lead the Indian National Lok Dal in 2019.

At stake is who will be the INLD’s chief ministerial face in Haryana’s next assembly elections, scheduled for 2019.

The rift is between Om Prakash Chautala’s sons, Ajay and Abhay – set off by the ambitions of Ajay’s son Dushyant, an MP from Hissar, and a man in a hurry to be his party’s candidate for chief minister.

Before that will come the Lok Sabha elections, which the INLD is expected to contest in all seats in Haryana. Both Om Prakash and Ajay Chautala are out of the running, barred from contesting elections after they were convicted in a teachers recruitment scam in January 2013. Both are serving ten-year sentences in Tihar Jail.

The conviction left Abhay Chautala, now MLA from Ellenabad, to hold the party together. The INLD has been out of power for 14 years. With its top leaders in jail, many had expected it to simply wither away. Yet Abhay, formerly considered the ‘black sheep’ of the family due to his brash conduct and fiery temper, provided leadership through a rough period and served as the leader of the opposition in the state assembly. Now he has his father’s ear and considers himself the heir to Devi Lal’s legacy. 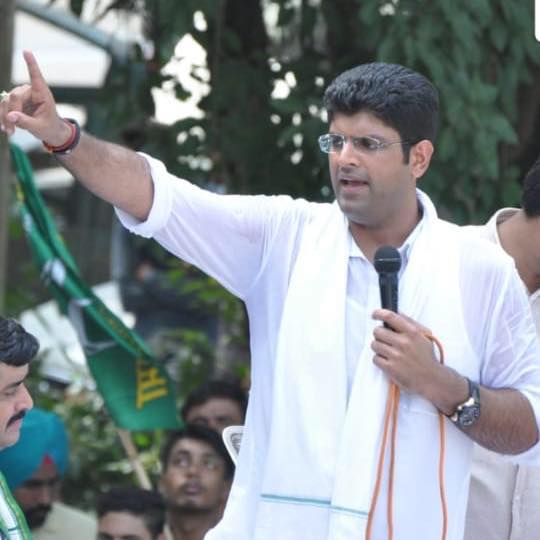 Still, the challenge from his nephew Dushyant has unnerved him. Thirty-year-old Dushyant Chautala is the youngest MP in the Lok Sabha, and a popular youth leader in the state. His youth and winsome ways contrast with his uncle’s arrogant functioning and controversial past. At Dushyant’s rallies, songs and speeches project him as the next chief minister, and song-writers are asked to liken his image to that of ‘Tau Devi Lal.’ His younger brother Digvijay Chautala is an ally in his campaign. Together, they headed the youth and student wings of the INLD.

On October 7, however, at a rally on Devi Lal’s 105th birth anniversary, Dushyant’s men disrupted proceedings just as his uncle Abhay Chautala began to speak. Dushyant’s supporters demanded that he be named the party’s candidate for chief miniser. It all happened in the presence of their grandfather, who was out on parole.

Om Prakash has since suspended both Dushyant and Digvijay. Their conduct will be examined by the INLD’s disciplinary committee. The two junior leaders may even be expelled from the party – although that would signal a split, and a toss-up for ownership of the INLD brand. (Chautala Senior also disbanded the INLD student and youth wings, though Dushyant rejected his grandfather’s authority to do so).

Also read: For Haryana Police, the Holy Cow Is an Excuse for Extra-Judicial Killings

Meanwhile, Abhay Chautala has his own tarnished past to reckon with. In 2014, he was charge-sheeted in a disproportionate assets case and forced to resign from the Indian Olympic Association. Abhay’s first wife died in mysterious circumstances, after a gun went off in the house. He later married her sister. His two sons with the sister, Karan and Arjun, have also begun to take interest in politics.

Until last month, differences within the party and the clan were kept largely out of public view. Om Prakash Chautala’s authority prevailed, even from jail.

With two generations of the Chautala clan tainted, however, many in the party now want to see the mantle of leadership passed onto the grandsons. That would favour Ajay’s sons, who have already cut their political teeth, while Abhay’s sons are only just starting out.

Given Om Prakash Chautala’s own struggle to assume control over the party, sidelining his brothers Ranjit Singh and Prakash Singh in the 1990s, it is hard to imagine that he did not anticipate the current crisis. (Ranjit Singh joined the BJP in 2004, just as the party broke its alliance with the INLD. Prakash Singh has not been politically active.)

Eventually, Chautala senior will have to choose between his younger son and his two grandsons. A temporary rapprochement may be possible, but the competition in the clan will not cease. Next year’s Lok Sabha and assembly elections have accelerated the fight, and both sides of the clan – at least the ones out of jail – know that this is time to sink or swim.