In a state dominated by Jat politics, where it took BJP over two decades to counter the Congress and Lok Dal (and later INLD), is the ground really prepared for entry of new players? New Delhi: The biggest message that came out of Aam Aadmi Party’s farmers’ mahapanchayat at Jind in Haryana today, April 4, was not said in words by Delhi Chief Minister Arvind Kejriwal, but was there to be felt – that the ongoing farmers’ agitation against the three Central laws has prepared the ground for change in politics of the state.

During his address, Kejriwal did not say anything which he had not said in the past. He accused the Centre of punishing his government in Delhi for supporting the farmers in their agitation by bringing in an amendment that gave primacy to the Lieutenant Governor over the elected one.

Also, he assured that his government would make any sacrifice for the sake of the farmers, that it was their “son” who was chief minister in Delhi, and that ultimately the BJP and the Centre will have to bow before the wishes of the protesting farmers and rescind the three laws.

But while Kejriwal spoke about how “over 300 farmers have laid down their lives during the agitation” and that he was not scared of any punishment that may be meted out to him for supporting their cause, what became clear from the mahapanchayat was that in the ongoing protests many parties, including the AAP, see a new opportunity to change the politics of Haryana.

For several decades, the politics of the state was dominated by the Congress or the Lok Dal floated by Chaudhary Devi Lal. While the trio of Devi Lal, Bhajan Lal and Bansi Lal ruled over the state for over two decades from 1970s to 1990s, later the Indian National Lok Dal under Devi Lal’s son Om Prakash Chautala and the Congress under Bhupinder Singh Hooda held sway. This trend was only broken in the 2014 assembly polls when soon after BJP’s win in the general elections, the party also wrested Haryana from the Congress and installed Manohar Lal Khattar as its first chief minister in the state.

Incidentally, AAP had made its first foray into Haryana under Yogendra Yadav in the 2014 Lok Sabha elections. However, as it lost across the country, barring on four seats in Punjab, it decided to re-evaluate its position and did not contest the assembly polls later that year. Yadav was ousted from the party the following year and Navin Jaihind was made the state in-charge.

Ahead of the 2019 Assembly polls in Haryana, AAP tried to forge an alliance with Jannayak Janata Party – the breakaway group of INLD that was led by Chautala’s son Ajay and grandson Dushyant – but the deal did not materialise. While AAP was unable to open its account in the subsequent polls, JJP won 10 seats in the 90-member House and joined hands with BJP, which had won 40, to form a government. Dushyant was rewarded by BJP with the deputy chief minister’s post.

Considering that just about a year and a half has passed since the last assembly election in the state, the farmers’ agitation has so far not been able to shake up the alliance the way many political parties expected.

In fact, soon after the three laws were passed in September 2020, Yadav’s Swaraj India had joined hands with various farmer groups to hold protests near the residence of Ajay and Dushyant Chautala in Sirsa to mount pressure on the family to severe ties from the BJP. The move has since found support from various other political and farmer groups.

In early March, INLD leader Abhay Chautala also urged farmers to ban the entry of JJP and BJP leaders into the villages and later during the month he issued a call that they be stripped and tied to the poles if they come visiting to their villages.

The Bharatiya Kisan Union, which remains an apolitical group despite its open criticism of the policies of the BJP in general and the Centre in particular, too has upped the ante. Recently it prevented Dushyant from moving out of the Sirsa airport for going to his house. Finally, the deputy CM had to take an eight-minute ride in a helicopter to enter the city.

With the anger among farmers against the three laws, and also JJP’s reluctance to part ways with the BJP only growing by the day, other political parties see in this an opportunity to strike the right chord and make headway.

Aam Aadmi Party is using a mobilisation programme to become a relevant player in state politics. Though Yadav’s Swaraj India has been closely associated with the nationwide protests in coordination with the Samyukt Kisan Morcha, AAP is also trying to gain politically by getting the Morcha on board. 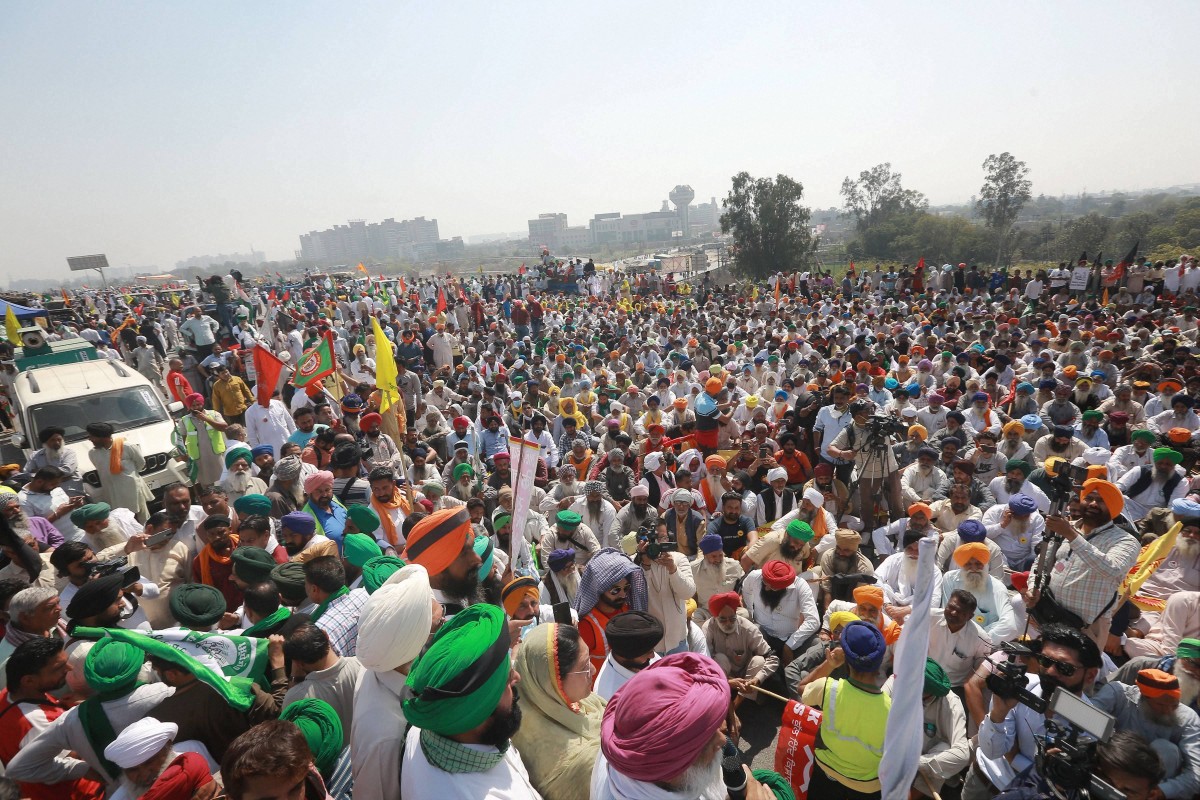 Farmers block a highway to mark 100 days of their ongoing protests against new farm laws, along the Delhi-Haryana border near New Delhi, Saturday, March 6, 2021. Photo: PTI

A major issue with AAP though is its limited reach among communities other than the Vaish samaj in Haryana. While Kejriwal, who hails from Bhiwani, hails from the community, so does the party’s Haryana in-charge and Rajya Sabha MP, Sushil Gupta. Another Rajya Sabha MP of the party, N.D. Gupta, also comes from the same community.

On the other hand, the politics of Central and Southern Haryana is centred around the aspirations and issues pertaining to the Jat community. Both Hooda and Chautalas represent this group. However, Sushil Gupta, who was among the major organisers of the event was of the view that people have “lost faith in other opposition parties” and see a “credible leader” in Kejriwal.

The view is not shared by other parties, like the Congress, who believe Kejriwal is only trying to milk the situation. Party leader Krishnamurti Hooda recently accused the AAP of neither being concerned about the interests of the farmers nor of Haryana. He charged that Kejriwal had earlier opposed the construction of the Sutlej Yamuna Link canal which was supposed to bring additional water to the state from Punjab.

In such a scenario, AAP may see in the mahapanchayat a great opening into Haryana politics, but traditionally new players have found it difficult to gain a foothold in this state.