With a key witness standing his ground and an investigating officer caught on tape making damning allegations of state complicity, an independent investigation is urgently needed.

Haren Pandya was a senior BJP leader who was killed in mysterious circumstances in 2003. The CBI mounted such an improbable case that the high court, while acquitting the accused, said action should be taken against the investigating officers. Illustration: The Wire Mumbai: A key witness in the Sohrabuddin fake encounter case told a Special Court in Mumbai earlier this month that the contract for the 2003 killing of former Gujarat home minister Haren Pandya was given by D.G. Vanzara, at the time a top officer in the Gujarat Police.

Azam Khan said that in 2010 he had given this information to CBI officials investigating the case but they refused to include this particular statement in his testimony.

Azam Khan’s statement to the Mumbai Court comes weeks after the CBI justified its decision to not challenge Amit Shah’s discharge in the Sohrabuddin-Kauser Bi-Tulsiram Prajapati fake encounter case. Ironically, it was a CBI team that had arrested Shah in 2010, charging him with murder, extortion and conspiracy to murder, destruction of evidence and abduction of Sohrabuddin and Kauser Bi.

The fact is that the official account of Haren Pandya’s murder had begun to unravel in the course of investigations into the Sohrabuddin and Tusliram Prajapati fake encounters.

The CBI case was that Pandya was shot dead outside Law Garden in Ahmedabad by Asghar Ali while he sat in the front seat of his Maruti 800. To buttress their case, they produced an eyewitness named Anil Yadram. The high court, which acquitted Ali in 2011, would later heap scorn on the improbable nature of the CBI’s charges.

It was also during the course of my own investigation of the encounters that I ran into some uncomfortable and troubling facts about the Pandya murder, affirmed in a damning conversation with the Gujarat police officer who had first investigated the killing, Y.A. Shaikh. I was a reporter with Tehelka at the time. Because the evidence in the case was not forthcoming by any means, I had decided to surreptitiously record Shaikh’s conversation with me. This damning conversation, which I published in my book, Gujarat Files, assumes new significance in the light of Azam Khan’s testimony.

It has been more than two years since the release of my book. During this time, neither has Shaikh controverted what I have published, nor has the government issued a denial. Shaikh, a Gujarat police officer, had conducted the initial investigation into Pandya’s murder and filed the FIR before the investigation was handed over to the CBI at the urging of L.K. Advani, who was Union home minister at the time.

Here are some portions of the conversations related to Haren Pandya’s murder. He started by warning me that I was being shadowed by the intelligence branch because I had visited him earlier. The reason for the state government’s interest, he said was because “this Haren Pandya case is like a volcano” and that if the truth were ever to come out it would drag down those who were at the very top. “Look at this, two days after Jagruti Pandya’s plea to look into Azam Khan’s statement in the Haren Pandya case, he was shot at in Udaipur. He survived so he was threatened and politically pressurized.”

This is how our conversation then progressed:

Rana Ayyub: But I am intrigued. How did the [intelligence] come to know about me?

Y.A. Shaikh: Madam, because [they] work for Modi. Why don’t you sting that witness, Anil Yadram? (Shaikh suggested this because journalists at Tehelka had in the past done sting operations on riot accused)

RA: But why? What will he have to say?

YAS: Arrey, he will tell the real story, who approached him first, what he knew and what he was asked to say. Chudasama [Abhay Chudasama] was also involved in the case. He is hand in glove with many criminals. Chudasama and all the officers are doing all this with inspectors like Barot [Tarun Barot]. Barot is the inspector, low level guy, he does the paperwork.

RA: Why did the witness Anil Yadram give a wrong statement?

RA: Why did they have to keep Asghar in detention?

YAS: They had to put the blame on any Muslim man, he was in illegal detention. What will he say later in defence? And you don’t need Asghar Ali’s confession too. All you need is evidence.

RA: So you are saying that Tarun Barot, Chudasama and Vanzara were complicit in this?

YAS: Yes. Sushil Gupta the CBI officer approved the concocted story of the Gujarat Police. Gupta resigned from CBI and is now a lawyer with the Supreme Court.

RA: So the CBI did not do its investigation?

YAS: It just did patch up. It bought the entire theory given by Gujarat police officers.

RA: So you are saying it is a political murder?

RA: Whose role was there? Barot or Vanzara?

YAS: All three. Barot was somewhere else and Chudasama was brought on deputation. They had got Chudasama. He works for the government. There is a Porbandar connection too in this encounter. It’s a blind case. They have just fit Asghar and the witness.

RA: Why did the CBI buy it?

Shaikh: The CBI rescued Modi in the case.

This conversation took place in 2010 where Y.A. Shaikh talks about the significance of the statement of Azam Khan that year. In the year 2010, my exposé on the fake encounters in which we also published Amit Shah’s call records and internal notes had led to Shah’s incarceration. It was at this time that Haren Pandya’s wife Jagruti Pandya reached out to me. She said she knew her husband’s murder involved political powers and that she wanted to petition the Supreme Court for a re-investigation in the case.

In July 2010, my sources in the CBI investigating the fake encounters told me that a Haren Pandya link had emerged in the investigation. They confirmed that a witness, Azam Khan, had stated that Vanzara and Abhay Chudasama were involved in the Haren Pandya murder but the CBI did not include this in his testimony because it was not a part of their mandate to investigate Pandya’s murder. One month later, Azam Khan was shot at in Udaipur.

Azam Khan’s statement on Haren Pandya was forgotten till earlier this month when he repeated his testimony in the Mumbai high court. Azam Khan further added “During discussion with Sohrabuddin, he told me that he, along with Naeem Khan and Shahid Rampuri, got the contract to kill home minister Haren Pandya of Gujarat and they killed him. I felt sad and I told Sohrabuddin that they have killed a good person. Sohrabuddin told me that the contract was given to him by Vanzara.”

At a time when almost every second witness in the Sohrabuddin and Tulsiram Prajapati fake encounters case has turned hostile before the courts, Azam Khan has remained consistent in his testimony on Haren Pandya. Neither the CBI nor the courts can dismiss his testimony when an early investigating officer in the case himself calls it a political murder. 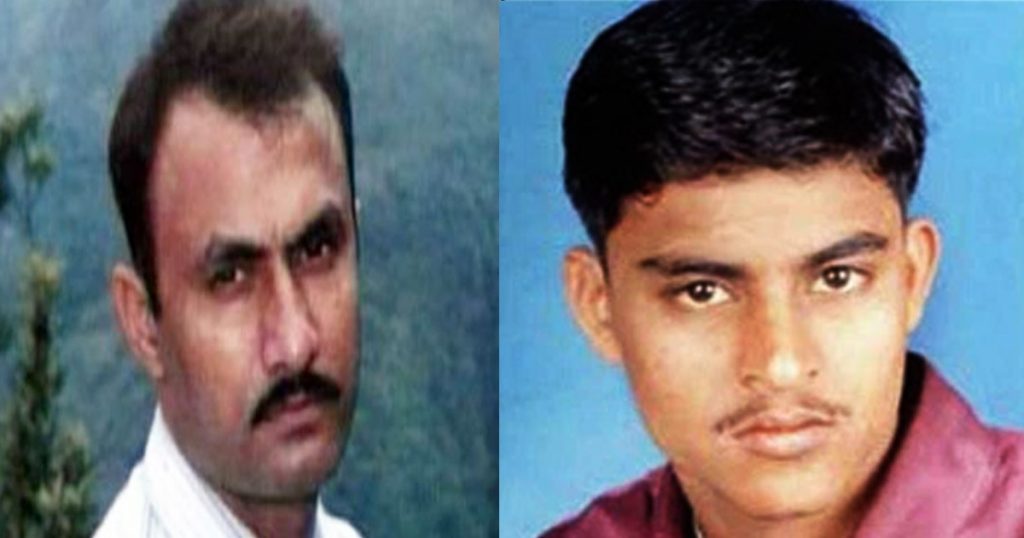 Haren Pandya’s murder has been shrouded in mystery since he was gunned down in 2003. His father, Vithal Pandya, told news channels his son’s killing was a political murder and needed to be investigated by the CBI. Back in Mumbai, while I was on another terror investigation in 2008, Daya Nayak, a famed ‘encounter specialist’ from Mumbai had told me that Haren Pandya’s killing was one of the biggest political murders in the history of India (a statement mentioned in Gujarat Files). Interestingly, Nayak was questioned by the CBI in 2011 for his role in helping the Gujarat police in the fake encounter of Sadiq Jamal. Was Nayak privy to the truth?

These questions had compelled me to explore the evidence available in the Pandya case. From meeting the family of the alleged mastermind, Mufti Sufiyan, to the man accused of firing the shots, Asgar Ali, or meeting the key witness Anil Yadram with a fake identity.

The contradictions in the forensic report and the details of the murder in the chargesheet were dissected by many investigative reports. Pandya’s phone call data, accessed by me and published in 2010, showed an unusual frequency of calls from the same number two weeks before his death. The CBI confirmed it had not questioned this caller who spoke frequently with Pandya in the days leading to his murder.

I met Anil Yadram, a street vendor and the key witness who claimed he saw the assassin walk up to the car and shoot Haren Pandya. Yadram, who spoke about the killing in precise detail to the CBI, developed amnesia when I met him. He gave me three different accounts in three meetings and in the fourth meeting he said he was not sure of what he saw because the scene of murder looked like a crime scene in a film and he was too shocked at that moment to take in anything.

Mufti Sufiyan was said to be the mastermind behind the entire conspiracy to murder Pandya. Sufiyan, a young cleric earned a quick name for himself by making incendiary speeches at Ahmedabad’s Lal Masjid. It was known that he had links with many in the underworld including Asgar Ali, who he allegedly hired to shoot Pandya, according to the CBI.

Sufiyan lived close to the local police station but a week after the murder he conveniently managed to leave the country. This when the Gujarat Crime Branch was allegedly keeping a watch on the suspects. A year after he escaped, his wife and children too left the country to join him. The local IB and CBI which claimed to be keeping an eye on his family remained clueless about his whereabouts.

I introduced myself to Sufiyan’s family as a health worker and through my conversations was surprised at their affection for Gujarat police officer Abhay Chudasama. They insisted Chudasama was a saviour for the family. Did this validate the claim of the investigating officer that Chudasama was brought into the case to ensure a smooth pass to Sufiyan? An investigating officer on condition of anonymity also said that the CBI refused to send a letter rogatory for tracing Sufiyan.

When almost all the key witnesses in the Sohrabuddin and Tulsiram Prajapati murder case have turned hostile, Azam Khan has stood his ground for what he considers the truth on the Pandya murder. An investigating officer of the most controversial political murder is on tape making damning allegations against the state over its complicity in the case. If nothing else, does this not call for an independent investigation into the murder so the ghost of this case be put to rest?

Rana Ayyub is a former editor at Tehelka and currently an independent investigative journalist. Gujarat Files: Anatomy of a Cover-Up is self-published and available at online retailers.