Hans Raj Hans: The Singer's Journey from Sufi to Bhakt

The BJP candidate for North West Delhi says this election is not about local issues but about keeping India safe from Pakistan. If India is safe, Delhi will be safe, and so will his constituency. 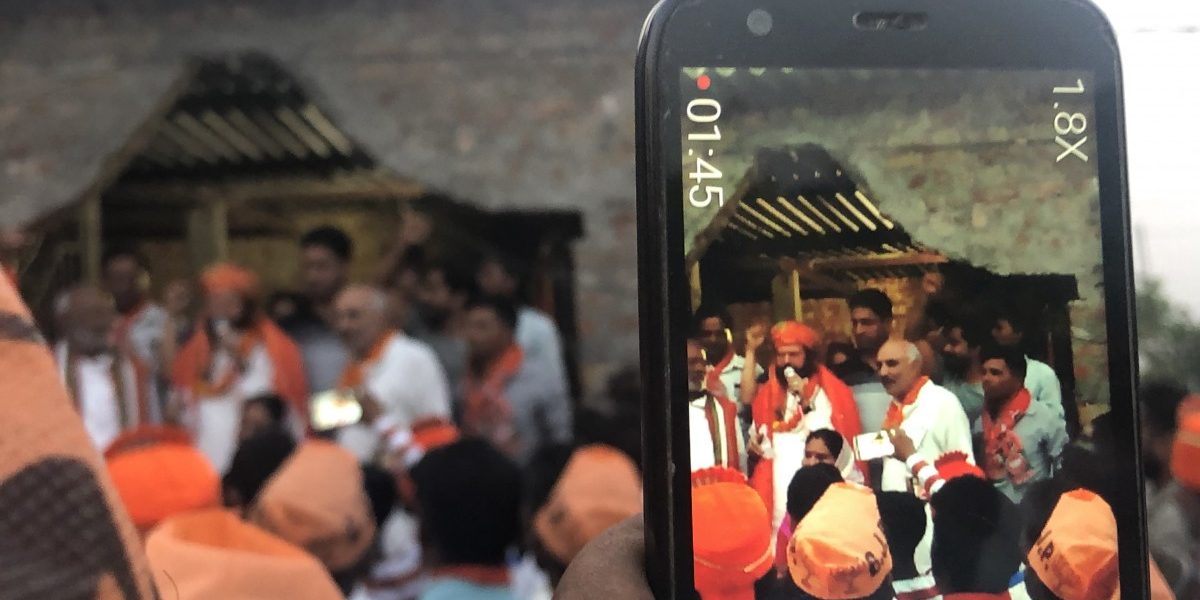 New Delhi: At the Swada JJ cluster in Nizampur in the North West Delhi parliamentary constituency, outside the local temple, dedicated to Durga and Rishi Valmiki, Bharatiya Janata Party workers try to keep the small crowd that has gathered entertained with music and slogans in anticipation of their candidate who is running late.

With some fanfare, one of them announces, ‘A great Punjabi singer is going to be amidst you soon. He’s Modiji’s favourite singer and you must make him yours.’  The reaction among the assembled audience is not one he has anticipated.

‘Is this candidate the BJP’s idea of a joke?’ asks Neha Dosh, a 22-year-old law student.

She confidently tells us that everyone in her colony and neighbouring clusters will vote for the Aam Aadmi Party. ‘We don’t want a singer from Punjab, we want Arvind Kejriwal.’

As we wait, we talk to the residents of this Valmiki basti. They are unanimous in their support forGugan Singh Ranga, the Aam Aadmi Party candidate who joined the AAP in 2017. But it is not Ranga who matters as much as the party he represents in this reserved seat, the largest constituency in Delhi

‘Please go and see the government school, it was falling apart, AAP has transformed it,’ Neha says while others nod in agreement. Sunita, holding her 6-month-old baby adds, “We lived in the gutter, now at least we have a drain.’

“AAP is the only one to work for the poor,” says Alok Kumar, a retired clerk, ‘It’s also the only party that has poor people as its members and managers. Go to the BJP office and you’ll know what we’re talking about.”

The conversation is interrupted by a rising crescendo of music and slogans, the BJP candidate has arrived and everyone rushes out to see him.

Hans Raj Hans, in a white kurta pajama, wearing a saffron saafa (turban), a saffron stole dotted with the party symbol and a marigold garland, steps out. He is mobbed by the local media as he makes his way to the temple.

Within seconds he emerges to address the crowd. ‘Yeh meri arzu bhee hai, meri abru bhee aur tammanna bhi,’ (It’s my longing, my desire) but is interrupted instantly by a senior BJP worker who takes the mic, cuts him off and yells ‘Vande Matram’. He then whispers something into the singer’s ear.

The microphone back in his hand, Hans Raj Hans leaves the earlier sentence incomplete and goes on to say, “I have come here on Modiji’s behest, for Modiji and to ask for votes for Modiji. You saw how he gave Pakistan a fitting reply; when you vote, remember the nation’s security first.”

‘Aap mere naam pe button dabaiye, kamal ka phool khilega Modiji naam par’ (Press the button on my name and the lotus will bloom in Modi’s name). ‘I will win and you will win, and together we will work and have some fun,’ Hans concludes his speech.

As he starts to climb down the temple stairs, another BJP leader pulls him back up, thrusts a piece of paper in his hand. He reads it and says ‘I have a list of local issues here I promise to look into them. I have got a house in Rohini now so I am no longer an outsider.’

He then ends his speech again with a ‘Jai Maharaj Valmikiji ki Jai’ followed by a chorus of Vande Matram and Bharat mata ki jai led by the BJP workers.

The BJP has fielded Hans hoping that even as an outsider, his identity as a Valmiki would work in his favour in this constituency with a large Valmiki population.

‘But traditional caste calculations aren’t going to be important in colonies like ours,’ says a local resident, Rohit, a Valmiki himself.

Referring to the BJP’s decision to drop their sitting MP Udit Raj, the former bureaucrat who has since quit and joined the Congress, Rohit adds, ‘If the BJP cared about Dalits why did they cancel Udit Raj’s ticket?’

As the gathering disperses, Alok, a construction worker, sums up the mood, ‘We came to see Hans Raj Hans because he’s a big name but he would have been better off as a singer in Punjab than a politician here.’

Ironically, the sentiment of strangers is echoed by old friends, well-wishers or others who have tracked Hans’ career.

‘Politics is destroying the man and his music. It is greed perhaps, it is senselessness for sure, a disregard for good advice and a search for something he feels he doesn’t have,’ says Desraj Kali, a journalist and a close observer of Dalit politics in Punjab. 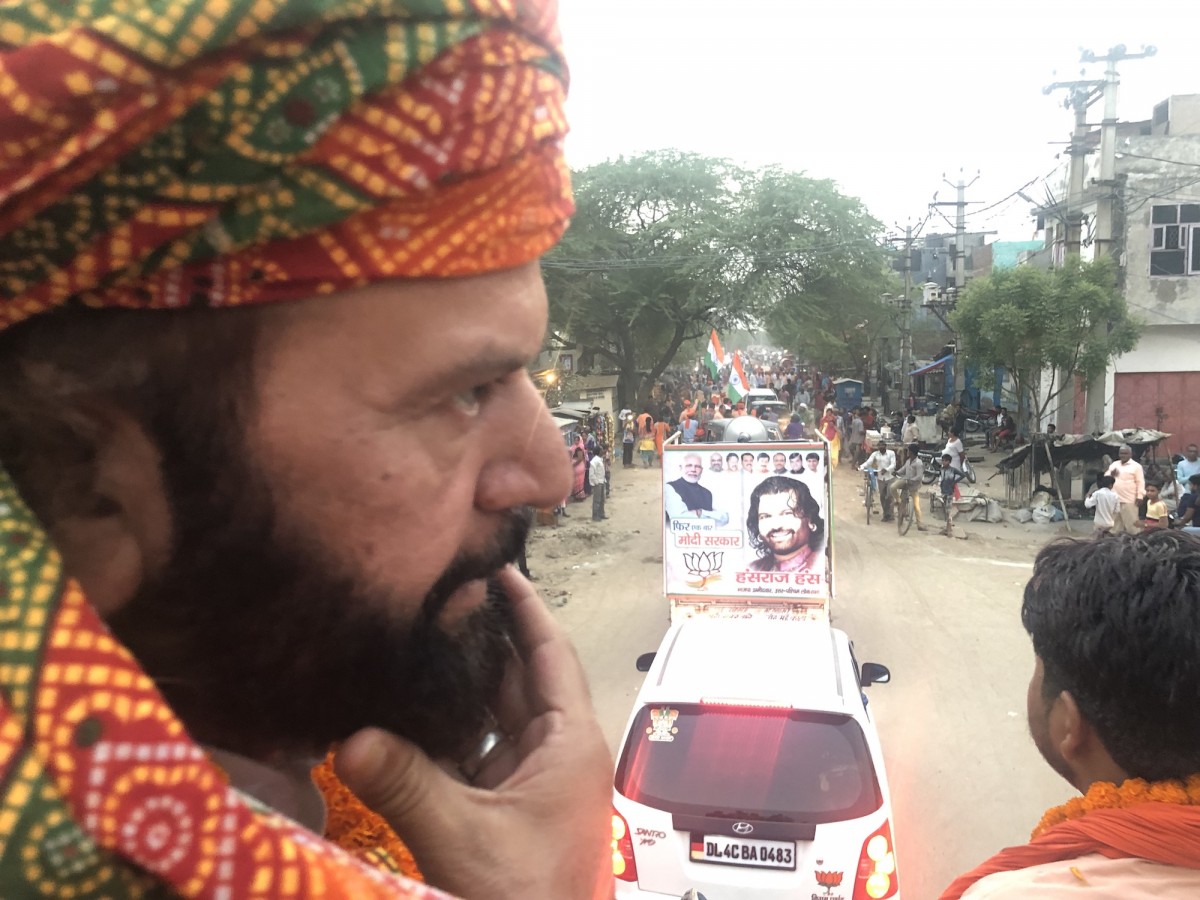 Hans was born in Shafipur village in Jalandar, and was barely in his teens when he became a disciple of Puranshah Kotti, a legendary singer from the Mirasi tradition.  His first hit, ‘Kanch diyan mundran’, reflected the traditional compositions of the Punjab Sufis that were part of his training.

The song and the hits that followed brought him great acclaim. He became known as a Sufi singer, popular not just in Punjab but across the country and outside. In 1999, the great qawwali singer Nusrat Fateh Ali Khan chose him to sing a song on a soundtrack he had composed for a Bollywood film, Kacche Dhage.

Ten years later, Hans created a stir when he entered politics, joining the Akali Dal to contest the Jalandhar Lok Sabha seat, only to lose by a narrow margin. In 2014, angry at being denied a ticket, Hans joined the Congress.

In October 2016, four months before the Assembly elections in the state, I interviewed Hans at his lavish home in Jalandhar. He was already upset with his new party, the Congress, which had denied him a Rajya Sabha seat. He also felt the Congress tended to overlook his Valmiki community in favour of the more politically dominant Ravidasiya (Jatavs) community.

I had then accompanied him to Nakodar, to the darbar of Almast Baba Lal Badshah, revered locally as a Sufi saint, which dates to 1947.  Hans is the sevadar of the dargah, in-charge of performing several religious rituals like the chaddar rasm or the burning of the main lamps.

In his trademark kurta, wearing a green turban, he took us on a tour of the sprawling dargah complex, with its sparklingly clean floors, manicured lawns and a massive well organised langar.  He spoke of the love he had for his pirs, the new construction he had undertaken with his money to expand the dargah and how it was a place open to all castes and religions.

It was this dargah that was evoked by Kejriwal and the AAP in a bid to scuttle Hans’ candidature by terming him a Muslim and hence ineligible to contest a reserved seat.  It was bad politics or at best ignorance of how fluid such spaces are in Punjab.

‘Arvind Kejriwal should know Punjab enough to know the darbar at Nakodar is not Hindu or Muslim,’ Kali notes, ‘you can be a Dalit and be the sevadar or head of a dargah here.’

Friends like Kali find Hans’ latest political bid unfortunate but say it’s in keeping with his political trajectory, ‘A man who called himself a Sufi, sings the verses of Bulleh Shah, now sings the tunes of Hindutva.’

After his speech at Swada, I accompanied Hans on an open truck on his road show through the constituency. I asked him why he’d joined the BJP, and what he thought of its hard-line Hindutva stands.

He gave me a stock answer, an answer that had been rehearsed, and betrayed no acknowledgement of the BJP’s reality. ‘The term Sufi is carved in my heart and this is a Sufi party, it is sabka saath, sabka vikaas.’ 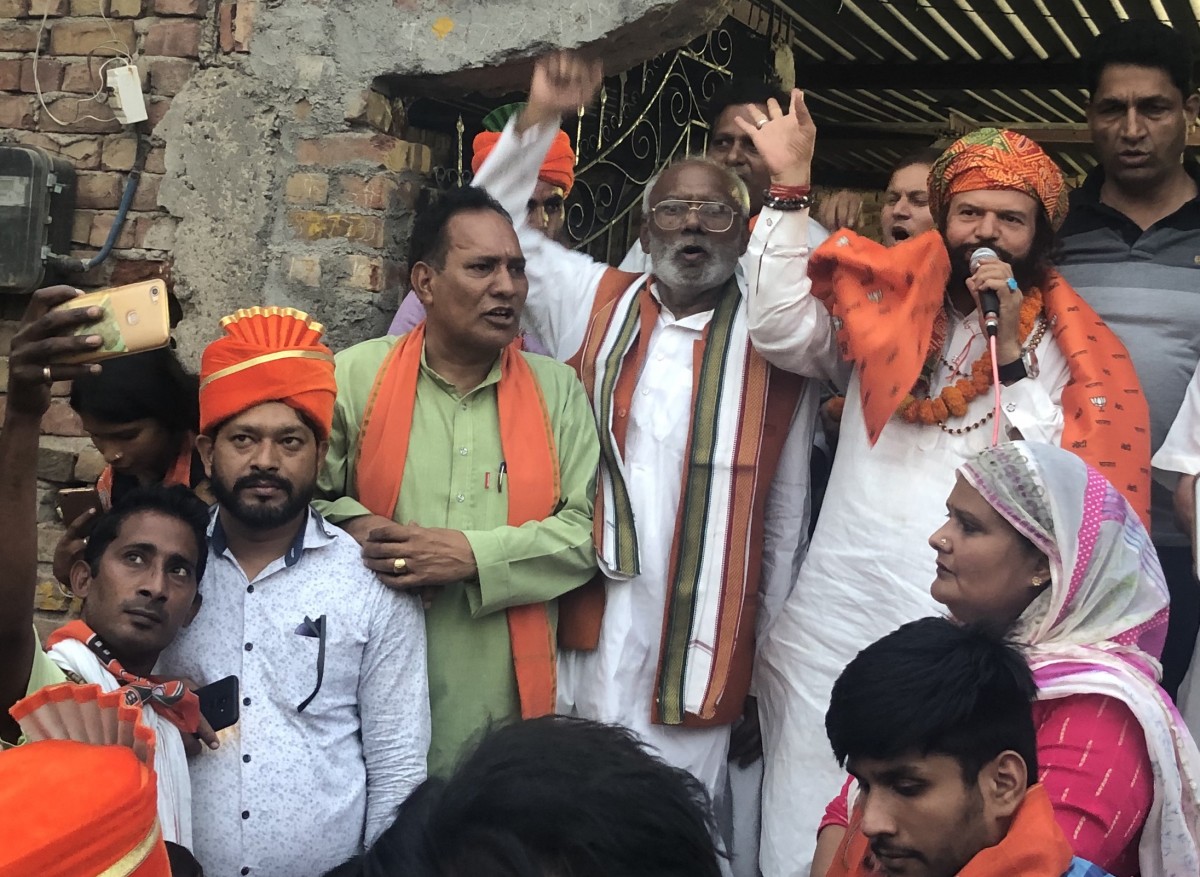 As the convoy made its way through the JJ clusters in Buddh Bazaar, larger crowds had gathered. And while everyone spoke of how they knew of his music, most of them told me they would back the AAP.

Mool Chand Chawla, the election in-charge at the BJP election office in Sector 7, Rohini seemed to admit this when he told me, ‘In our fight with AAP, there were two weak seats, Gautam Gambhir’s and ours but we’ve taken care of it.’ What they mean by addressing it is that they are banking on the fact that Modi’s name may be enough to see Hans through.

What Hans can do for them in turn is to pull the crowds, and keep them entertained by singing.

‘We’ve asked him to tweak his songs a little, so he does some desh bhakti geets,’ says a BJP worker.

‘Besides, as you know, these elections are not about MP candidates, they are about Modij’ adds Ashok Bharadwaj, a local businessman who volunteers to work for the BJP during every election without fail. His advertising agency, Aaghaz prints election posters, pamphlets and fliers for all political parties.

Bharadwaj makes it a point to tell me what I’ve seen in the JJ clusters and villages does not sum up the entire constituency, ‘Sector, 9, 13, 14 and 8 are very posh areas, we have parks and clubs, a 2BHK flat costs up to 2.75 crore, it’s an area that rivals South Delhi.’

‘And not just in these but in all of Rohini’s sectors,’ he tells me, ‘ I can assure you most people will vote for Modiji, he’s the only one who represents us.’

‘Us’ given the context and the mix of the BJP office workers seated around us seems to indicate  the affluent, large Hindu upper-caste residents of these sectors. As he finishes speaking, Rashmi Lilgiria, a Marwari fashion designer, joins us. She’s known for her ability to mobilise crowds for election events, drawing on a large number of women who are members of the club she runs. The club organises events to mark festivals like Navratri, Janmashtmi and Teej.  She says she’s also looking forward to the day when she can invite Hansraj Hans to perform ‘exclusively for the ladies.’

When he goes, it would be a far cry from the dargah at Nakodar.