'You spent most of your time in West Asia, in that single circle, that way of thinking, among those people. After retirement, be it in the minorities commission or Aligarh Muslim University, your circle remained the same.' 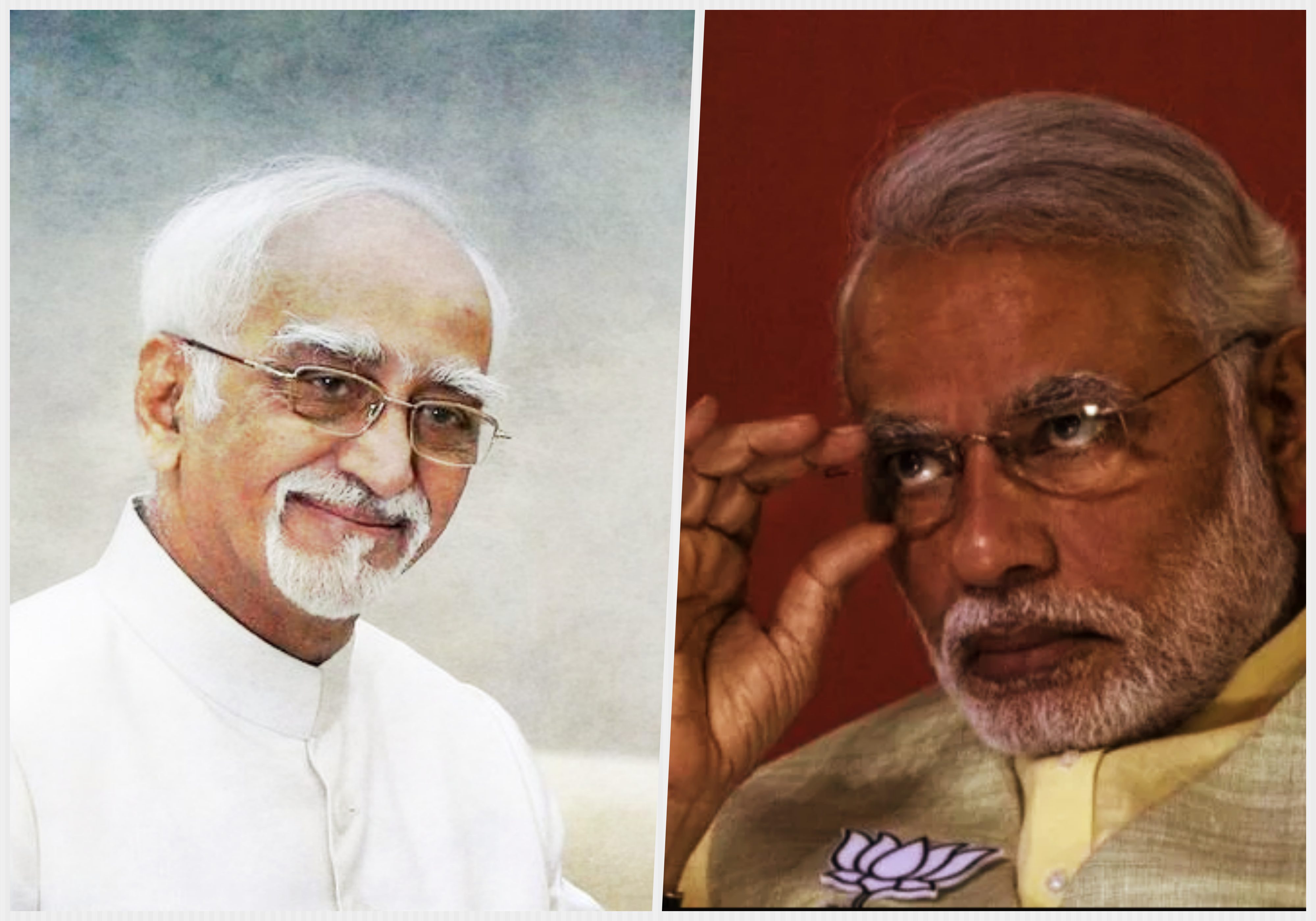 New Delhi: His tenure was distinguished and the time he spent in office is matched only by S. Radhakrishnan but Mohammad Hamid Ansari will probably go down in the history books as the vice-president who received the bitterest of farewells from a sitting government.

Visibly upset by the remarks Ansari made in a farewell interview, the BJP on Thursday threw caution and propriety to the wind, getting senior leader Kailash Vjayvargia  to attack the outgoing vice president, while Prime Minister Narendra Modi also took a dig at him on the floor of the Rajya Sabha.

In between, the party got M. Venkaiah Naidu, who took over from Ansari at the stroke of midnight on August 11, to accuse him of trying to “defame India” – an incredible charge to level against a man who held one of the country’s highest constitutional posts for a full decade.

‘Confined to a circle’

Sheathing his attack behind words that appeared to convey his best wishes to the outgoing vice-president, Modi presented Ansari as someone with family ties to the Congress party and the Khilafat movement whose prior experience, beliefs and associations were essentially limited to Muslim preoccupations – the prime minister didn’t use the M word though the implication was unambiguous. In Modi’s telling,  Ansari, who had got used to working within a certain “circle” was then forced to adjust himself to the dictates of the constitution while in the vice president’s chair. “That must have made you restless but from now on you are free to think and say what you really feel,” he said.

With these words, Modi joined his party colleagues – and an army of right-wing social media trolls – in delegitimising the observations Ansari had made in a lengthy interview to Karan Thapar on Rajya Sabha TV about the manner in which the Indian value system was being undermined by those questioning the patriotism and Indianness of some citizens and making Muslims feel insecure. On Twitter, Ansari’s remarks were dismissed as the observations of “an ungrateful Muslim”; in parliament, Modi helped the rabble outside connect the dots, as it were, between the expression of what the vice president “really feels” and the “circle” he allegedly remains confined to.

Modi started by recounting a version of Ansari’s family history:

(A family that has almost 100 years of history of public service. His grandfathers served as the chief of a national party, and also in the constituent assembly. In one way, he comes from a family, the ancestors of which had a public life, especially with with the Congress party; his family was also active in its support for the Khilafat movement.)

Considering that in today’s context the Khilafat movement – an anti-colonial agitation of the early 1920s aimed at preserving the authority of the Ottoman rulers in the face of British efforts to dismantle the Turkish empire – is nothing but a sideshow in the wider Indian freedom struggle, Modi’s decision to speak of it was perhaps driven by its Islamic resonance.

Modi then paid a backhanded compliment to Ansari’s skills as a “career diplomat”. These skills helped him run the Rajya Sabha but it also made it difficult for others to read his mind:

(Your life was that of a career diplomat. I understood what being a career diplomat means  only after becoming the prime minister. Because the way they smile, they way they shake their hands has a meaning which a novice may not understand immediately. They are trained to do that. But that skill must have been useful for you in the last 10 years. Your skill must have benefitted the house and in trying to managing contrarian voices in it.)

From here on, the prime minister’s ‘humour’ made way for a less benign kind of stereotyping:

(In your career as a diplomat, you spent most of your time in West Asia. You spent most of your life in that single circle, that environment, that way of thinking, among those people. Even after retirement, your work was similar, be it in the minorities commission or Aligarh Muslim University. More or less, your circle remained the same.

But in the last 10 years, you had a different responsibility. Every minute, you had to work within the limitation of the constitution. And you worked to the best of your abilities. It is possible that you must have encountered restlessness in the process. But after today, you will not have to face even that dilemma. You will experience freedom and will be able to work, speak, and think according to what you really feel.)

Given that Ansari’s last posting as a career diplomat was as India’s permanent representative to the United Nations and that he had also served as India’s envoy to Australia and Afghanistan, Modi’s decision to confine his diplomatic career to the ‘dayra’ or ‘circle’ of “West Asia” is a little odd. Besides, Iran and Saudi Arabia – two major West Asian nations at odds with each other where Ansari did represent India – can hardly be said to have the same ‘mahaul’ (atmosphere), or ‘soch’ (thinking) or ‘log’ (people). As someone who prides himself in his knowledge of foreign policy, Modi must surely know this. Unless, of course, the idea was to reinforce in the minds of listeners the fact that Ansari is a Muslim and to connect ‘West Asia’ – “those people”, “that way of thinking” – to the minorities commission and AMU, institutions the BJP has always considered illegitimate and which his government is today trying to devalue.

The previous night, Ansari in a restrained interview (the transcript of which was made available before the actual telecast) had spoken about the growing sense of insecurity and alienation among Indian Muslims in the present day political climate. He also said the repeated or enforced assertion of nationalism was unnecessary, stressing the values of pluralism and diversity that have traditionally formed the bedrock of Indian nationalism. He pointedly refrained from criticising the prime minister or his government.

Despite the very careful manner in which he chose his words. the outgoing vice-president’s views proved to be so embarrassing for the BJP that the prime minister felt compelled to launch his thinly-veiled attack on Ansari.

A day before assuming office, M.Venkaiah Naidu, in an apparent dig at Ansari told ANI, “People try to use minority issues for political purposes…India is the most tolerant country…Unfortunately, some people are trying to blow it out of proportion and trying to defame India, raising it to national forum.”

Naidu was not alone. BJP general secretary Kailash Vijayvargiya went a step further and called Ansari’s comments “petty”. He even accused him of seeking “political shelter” after his retirement.

“I condemn his comments. He has made political comments as he is retiring. He is still a vice-president and such comments do not suit his office’s dignity. It seems he is making such comments to find political shelter after retirement…Nobody expects such petty comments from a person holding such a high post,” said Vijayvargiya.

What Vijayvargiya mentioned as “comments” was in fact a free-flowing discussion on a range of topics about Indian polity and society in which Ansari clearly comes across as a liberal democrat, critical equally of what he thinks as regressive social customs across all religions and advocating a judicious mix of tradition and modernity.

Echoing Vijayvargia’s sentiment, the Vishwa Hindu Parishad – an ideological associate of the BJP – also launched a scathing attack against Ansari, equating him with Mohammad Ali Jinnah and accusing him of  trying “to push country towards another partition.” The VHP’s joint general secretary, Surendra Jain, felt that Ansari commented about the sense of insecurity among Muslims only to set his “political agenda” for the future, and not because violence against Muslims is on the rise under Modi’s regime.

An organised effort by the Sangh parivar to vilify Ansari and further cement its majoritarian political rhetoric is underway on social media.

In contrast to this aggressive pitch of the BJP machinery, Ansari left the house in his usual statesman-like, dignified demeanour. Beginning his farewell speech with a Urdu couplet, “Mujhpe ilzaam itne lagaye gaye, begunaahi ke andaz jaate rahe (So much was I accused that ways to prove my innocence deserted me), he first thanked everybody and then went on to highlight the role of Rajya Sabha in Indian democracy.

“…This house is a creation of the constitution and reflective of the wisdom and foresight of the founding fathers who wished it to portray India’s diversity and to be a calibrated restraint on hasty legislations. It has upheld democracy’s sacred creed that discussion instead of being a stumbling block in the way of action is in fact an indispensable preliminary to wise action. Deviation from this golden rule contribute neither to diligent policy making nor to our claim to be a mature democracy based on rule of law.”

Ansari went on to quote India’s second president S. Radhakrishnan, “A democracy is distinguished by the protection it gives to minorities. A democracy is likely to degenerate into a tyranny if it does not allow the opposition groups to criticise freely and frankly the policies of the government.”

Perhaps Radhakrishnan’s political and intellectual lineage will now be scrutinised.