Indranil Rajguru, who won the Rajkot East seat for the Congress in 2012, has decided to contest against Vijay Rupani from Rajkot West this time. 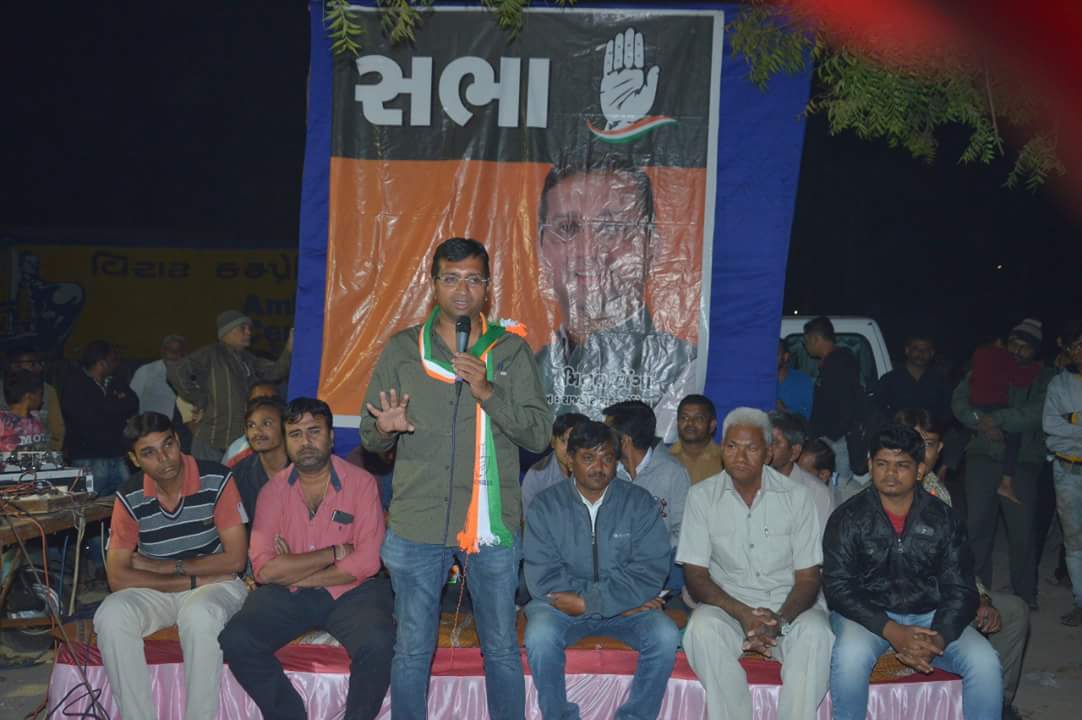 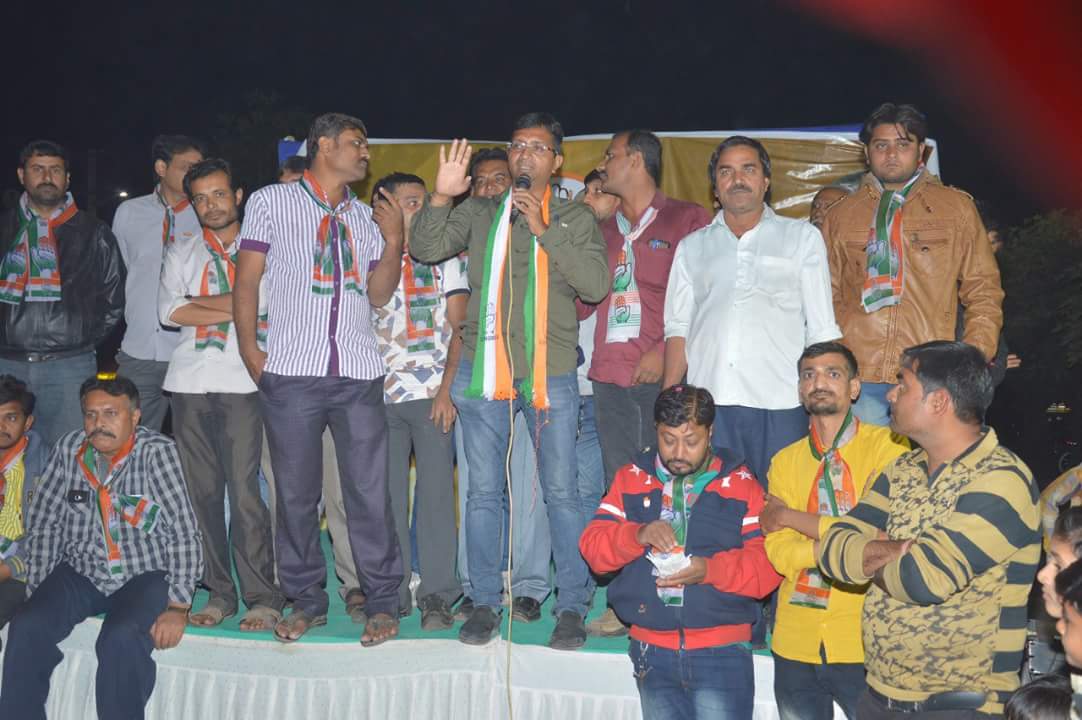 Rajkot: In the Gujarat assembly elections of 2012, the Rajkot East seat saw Congress candidate Indranil Rajguru defeat BJP’s Kashyap Chimanbhai Shukla. The Congress managed to win this seat after 20 years, and it was the only seat (out of four) in the city that went to grand old party. The other three seats – Rajkot West, Rajkot South and Rajkot Rural – were all won by the BJP.

This assembly election, Rajguru has decided to change his constituency to Rajkot West and face off against BJP candidate and chief minister Vijay Rupani, leaving the Rajkot East seat in jeopardy in the absence of a strong candidate.

Both the BJP and Congress have fielded Patidar candidates, given that the constituency has a large number of Leuva Patel voters. The BJP has fielded the corporator of the area Arvind Raiyani while Mitul Himatbhai Donga, a businessman, is the Congress candidate.

Raiyani, a Patidar leader, has been the corporator of the area for 15 years. He is the son of a farmer whose family migrated to Rajkot East from Gunda village, and works as a silversmith and local businessman. His is a known face in Rajkot East.

Donga, on other hand, isn’t a resident of the area, and to add to that, has hardly visited the constituency before this year. However, he is a Patidar leader closely associated with the Kodhaldham Trust, a religious institution at Kagvad near Rajkot, which is highly venerated by Leuva Patels. Donga’s events management company has been organising programmes for Kodhaldham since its inception. The Saurashtra region is dominated by Leuva Patels, and in an attempt to woo their votes, both the BJP and Congress have tried to stay on good terms with the trust.

Donga is also close to Rajguru, who is the president of Congress’s Rajkot cell. He is said to have been handpicked by Rajguru, despite dissatisfaction amongst party leaders over his candidature. He had contested elections from Rajkot South in 2012 and lost to BJP candidate Govind Patel by more than 28,000 votes.

The biggest jolt for the Congress candidate came when the party asked him to withdraw his nomination, following an understanding with the Sharad Yadav-led JD(U). Donga, however, had not withdrawn even at the end of the last day to withdraw nominations for first phase of the polls on December 9. “There has been some confusion and I haven’t received any such instruction from the party,” Donga had stated to the media last month.

The Congress candidate began his campaign early this year in Rajkot East and was introduced by Rajguru, the sitting MLA from the constituency. Donga even opened a new office for himself to streamline his campaigning.

“Last election, we did not like the BJP candidate so we did not vote for him. The BJP candidate for this election is a corporator. But we don’t know who Mitul Donga is. We have never seen him here before,” said a Patidar man in his 50s who owns a provisions store in the Ranchodnagar area of Rajkot East.

The Congress Rajkot cell, however, is confident it will retain the seat. “The preparation for Rajkot East is the same as Rajkot West and we will easily retain the seat,” said Rajguru. 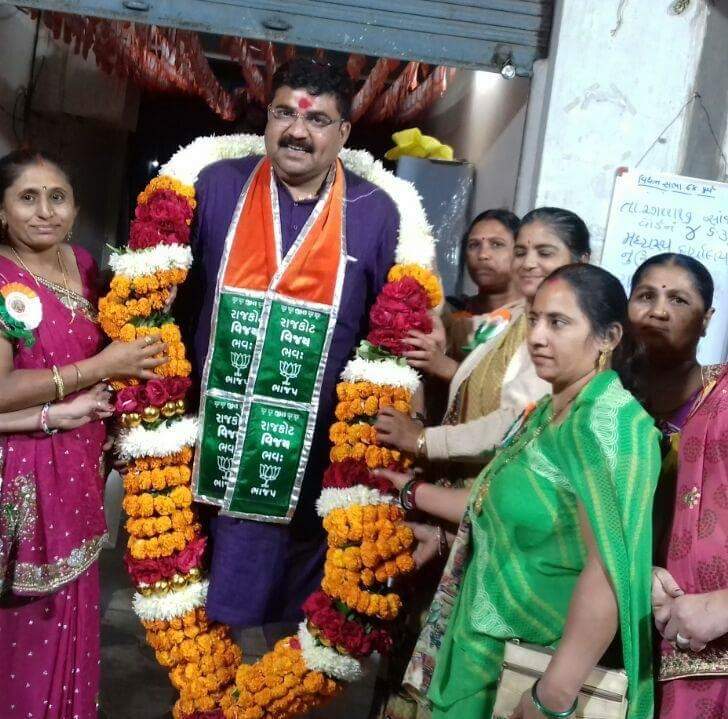 Before 2012, Rajkot East seat had remained a BJP bastion for 20 years. In the assembly election of 2012, Rajguru, who secured about 60,000 votes, defeated Kashyap Chimanbhai Shukla by a narrow margin of about 4,000 votes.

“What cost the BJP their stronghold seat was the Gujarat Parivartan Party (GPP) fielding its candidate from the seat. Both the BJP and Congress candidates were Brahmins. GPP’s Pravinbhai Ambalia, being a Patidar leader, managed to secure more than 20,000 votes, making a serious dent in BJP’s core vote bank of Patidars in the constituency and paving the way for Rajguru’s win,” said Deepakbhai Panara, city committee member of the BJP in Rajkot.

“Raiyani is a known face in the area, people know where he lives and his family, he had quite successful term as a corporator and people are happy with his work. Donga began accompanying Rajguru in this constituency from early this year but he is a stranger to the locals,” added Panara, who has been with the BJP for 30 years and has been given the responsibility to oversee Raiyani’s campaign.

“This is the first time that the BJP has fielded a local candidate. All we had wanted was a local face as a candidate this time,” said Kishore Uteriya, an RSS worker who was the ward mahamantri representing the OBC community, and is campaigning for Raiyani now.

“Raiyani is the man next door for us. Every resident here knows him as a local leader whose door we can knock on anytime,” said Vijay Kumbharadiya, a businessman in the area who has been associated with the BJP for ten years. “Rajguru used to visit the area a lot during the first one and a half years after winning (in 2012), but hasn’t been seen much in the last three years of his tenure as MLA of the area. His movements have been more in Rajkot West than this side of the city and his popularity there will not secure a win for Donga in Rajkot East. Nobody knows Donga here.”

The Rajkot East constituency, which is the less developed part of the city, is dominated by urban voters. The constituency has about 40,000 Patidars, a majority of them Leuva Patels, about 42,000 Kolis and a considerable population of Muslims and OBCs.

“The areas where Patels reside are quite upscale, but colonies of SCs or even OBCs are not that developed,” said Kaushik Bharwad, a local youth in his late 20s who runs a beetlenut shop in the ward number four area of Rajkot East where, people of the OBC and SC communities live in urban slums, with open drains flowing across the residential areas. Ward number four houses the BJP corporator’s office as well as the local office of the Congress, and yet remains underdeveloped.

“The ward number fifteen is also not so developed,” he continued, while warning against visiting the area as it is “dominated by Muslims”.

“Last time we voted for the Congress but we got nothing. This time we will vote for the BJP. Maybe the BJP candidate will do something for us,” added Bharwad.