While peasants in the Patidar-dominated districted have sided with Hardik Patel, affluent industrialists still harbour mixed feelings on whether the BJP has addressed their issues. 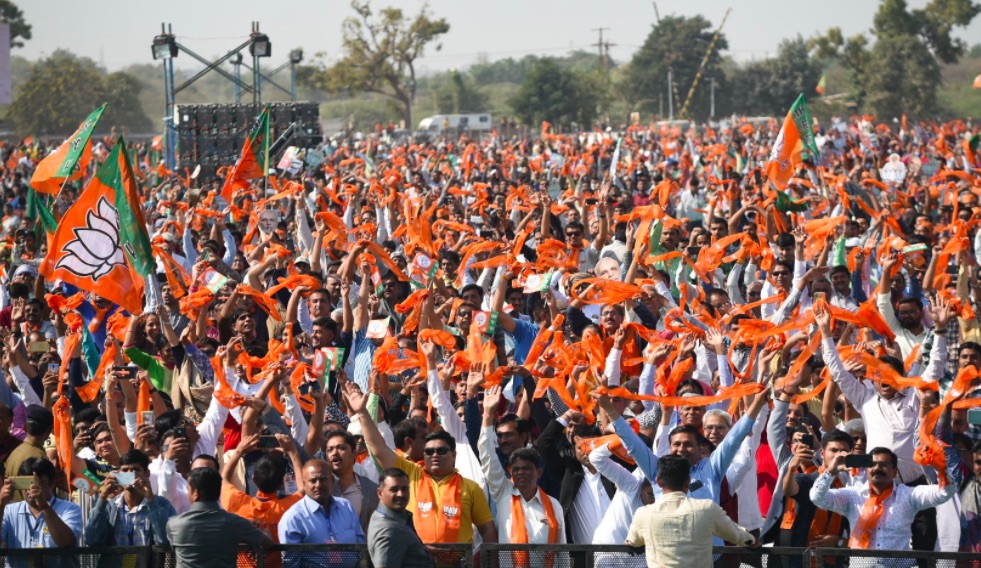 Morbi, Gujarat: A thick cloud of ceramic dust welcomes you as soon as you enter the boundaries of Morbi, a small district on the western fringes of Gujarat’s Saurashtra region. To see so many people with their faces covered is surprising, especially if you are entering the city from the calm, lowly-populated Kachchh. As apocalyptic as it may sound, Morbi accounts for 80% of India’s ceramic tiles and furnishings production. Lined with hundreds of tile factories and paper mills that manufacture boxes to pack these tiles, Morbi presents itself as one of the biggest beneficiaries of the industrial drive that the “Gujarat model” boasts of.

In the past few days, the city has turned into a hotbed for the political war between the 24-year-old Patidar leader Hardik Patel and Prime Minister Narendra Modi. As if to directly challenge the prime minister, Hardik timed his public meeting to clash with Modi’s on November 29. A day before, political observers in the state were keenly waiting to see the turnout in both meetings. Social media too was abuzz with speculations.

Eventually, both the BJP and the Patidar Anamat Andolan Samiti (PAAS) led by Hardik claimed to have defeated each other as far as gathering crowds was concerned. Both Modi and Hardik posted photos on Twitter and Facebook that showed a mass of people attending their respective meetings. But with no real way to count the people gathered, the social media debate turned out to be yet another exercise by both leaders to swing the political narrative in their favour.

The district is dominated by Patidars, who also control most industries here, including ceramics. The ceramic industry started in the 1970s, but got its real boost with the opening up of the market in the 1990s, when it turned export-oriented. Modi’s 13-year stint ensured that the industry in Morbi received enough incentives to boost Gujarat’s growth. Morbi, over the years, has become the ceramic capital of India. As most of these factories are owned by influential Patidars, the BJP benefitted electorally too from the growing ceramic industry.

But since 2015, the district, along with Amreli, has metamorphosed into the nerve-centre of the Patidar agitation against the ruling BJP in Saurashtra. The large-scale agitations showed that not everything is glittery in Morbi’s growth story.

Currently, Hardik claims that Patidars are filled with anger and will vote to oust the saffron party from power.

On the other hand, the saffron party thinks that it has managed to address a number of the issues that Patidars raised in Morbi and, therefore, is making its last-minute moves – one of them being Modi’s meeting – to win them back.

Modi reminded people that it was during his terms as the state’s chief minister that Morbi became a ceramic hub, a result of his “Gujarat development model”. Most of his speech, however, appealed to the poor. He said that his government brought water and sufficient power, which benefitted many in the region. This indicates that it may be the Patidar peasants reeling under a farming crisis, who have become Hardik’s foot soldiers and harbour negative sentiments towards the saffron party, that he was trying to appease.

A split between affluent and poor Patidars?

The situation in Morbi is a little more complicated than it appears. A strong sense of anti-incumbency, arising out of a long spell of BJP rule and triggered recently by harsh government policies like demonetisation, is clearly visible in rural areas. But affluent and middle-class Patidars in the city appeared confused about their political choice, while remaining critical of BJP’s policies like the Goods and Services Tax (GST).

The BJP has been aware of this resentment against the party. Thus it has been trying very hard to appease the powerful industry owners, who have been under duress because of a complicated GST structure and the government deciding to raise the tax slab on ceramics from around 18% VAT to 28% under the new system.

While some sources in the Gujarat BJP claim that it has managed to bring a large number of factory owners back into the saffron fold, a few Patidar entrepreneurs The Wire spoke to indicate that there could be a split within the affluent Patidars too.

K.G. Kundariya, an influential player in the ceramics industry based out of Morbi, told The Wire, “There were three main demands of the ceramic industry owners. One, bring the GST down to 18%. Two, remove the newly-added tax on exports. Three, cancel the 18% GST on procuring an export promotion capital goods license, which helps us import machinery at a low cost to set up a tile plant. The government has agreed to all our demands.”

He added that the situation has become favourable for the industry again. Commenting on the political clash between Hardik and Modi, he said, “Now, the conditions look good. We are hoping that our exports will jump to Rs 10,000 crore next year. So I do not see much negativity in the industry currently. In rural areas, there is some resentment but we may be able to contain that.”

“Around 20-30 people from each village around this area work in around 840 tile factories. The owners, too, are connected to their villages. If we say that around 100 local people work in each factory, then 8,400 people will work to influence the outcome of the election of at least four seats in the area. The Congress has gained a competitive edge, undoubtedly, but I do not see anything more than 5% split in Patidar votes against the BJP,” he added. 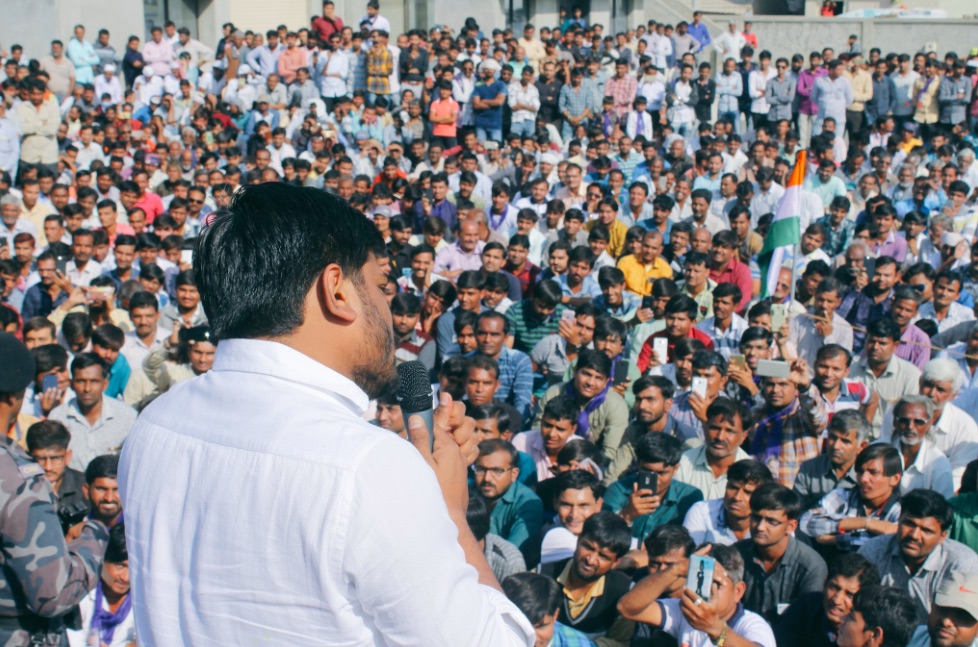 But there is another view. According to Bhavesh Patel, vice-president of ceramic industry association (floor tiles), many other issues remain to be addressed. He raised three points.

“One, in the earlier system, the tax that we paid remained around 14% effectively, after all the cuts and incentives from the government. There was a single system of filing returns. But the GST, which claims to ease the taxation system, is much more complicated than the previous one. We are ready to pay tax but it should be levied from either the traders or manufacturers, not at both levels. The government has to understand that we work on credit. The traders pay us after six months of purchase. The GST has broken their backs and thus, demand is at an all-time low.”

“Two,” Bhavesh said, “The new policy intended to boost exports has actually made things worse. Earlier, for every export worth Rs 100, we used to get a throwback amount of Rs 10. Now, according to the new policy, we get only Rs 1.50 as against Rs 17 for China’s exporters. How does the government expect us to compete against China in the global market?”

“The government has been incentivising the use of clean energy. So despite high costs, many of us had started to partially use natural gas as the source of energy. But now natural gas is exempted from the GST (and still subject to high indirect taxes), most of us have gone back to coal-based energy. If you look around, the already-polluted Morbi will only deteriorate because of this,” he continued.

“The point is that,” he summed up, “we pay so much tax but in terms of services and city infrastructure, we have hardly got anything in return. There is no rail and air connectivity, not even a decent hospital in Morbi. There is no democracy in Gujarat, only afsarshahi (bureaucratic high-handedness). They want us to pay our returns on time, but most of them want tiles for their homes without bills. And they claim we are chors (thieves).”

The ceramic industry drives the economy in four assembly constituencies – three in Morbi (Morbi, Tankara and Wankaner) and one in the adjoining Surendranagar district (Dhrangadhra). Barring a few pockets in Wankaner, the Congress had almost negligible influence here. The Patidars, who have stood with the BJP through its good and bad times, have historically influenced the region’s electoral outcome the most. Now, while it remains to be seen where a majority of them will vote on December 9, the rising discontent among them is perceptible. If the urban Patidars join hands with their rural counterparts, the BJP may be on a sticky wicket.