The party's resolution condemned all "pseudo-seculars who do not support Ram Mandir" and claimed that the Congress talks in “Chinese and Pakistani". 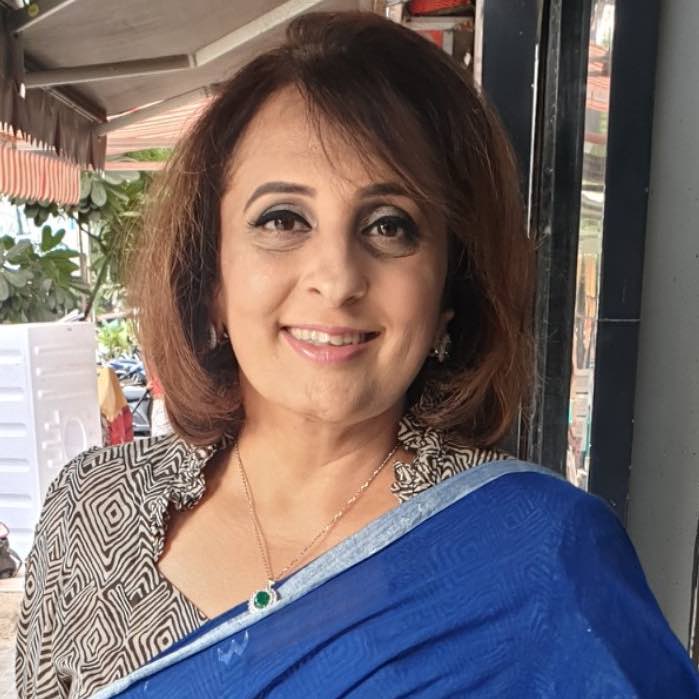 Ahmedabad: Aggressive Hindutva is back with more muscle in Gujarat. That was the takeaway from the first day of the BJP state executive meeting that Union defence minister Rajnath Singh attended on Thursday in Kevadia.

It was also clear that while the state assembly elections are 16 months away, the BJP has begun preparations and is determined to do better than ever in Gujarat, its home turf.

At Kevadia, the home of the towering Statue of Unity, each speaker showered thanks on Prime Minister Narendra Modi – referred to as PM Narendrabhai – for everything from ‘eradicating terrorism’ in India to ‘reclaiming India’s self-respect and native pride nationally’ and, of course, diluting Article 370 and paving the way for a Ram temple in Ayodhya.

It was evident that even though the party had focused more on vikas and acchhe din in 2017, it is aggressively reclaiming its Hindutva line in the next election.

State BJP chief C.R. Patil announced that on September 17, Prime Minister Modi’s 71st birthday, a special aarti will be held at 7,001 Ram temples across Gujarat. If you don’t find a Ram temple, Patil said, just put a photo of Lord Ram and perform the aarti.

“Not only has Modi ji eradicated terrorism [in the country] but now India is on the way to become a major arms exporter. In fact, this year, India exported over Rs 17,000 crore worth of defence products,” Rajnath Singh told an exulted audience.

He said the fact that the BJP has been in power Gujarat for nearly 26 years – with only a brief interruption – was proof of the party’s popularity. “We do not win by manipulating EVMs as they allege. We win because people want us and people trust us,” he said to huge applause.

‘Congress talks in Chinese and Pakistani’

The state BJP adopted a resolution which read that under the “dynamic, strong, prosperous leadership of Narendra Modi, the BJP was marching ahead to build a safe, secure India full of self esteem and national pride”.

The resolution applauded the prime minister for taking all steps to make India a vishwa guru, and highlighted women’s empowerment measures taken by the BJP, especially those that “empower Muslim women in India” – referring to the law against instant triple talaq.

The resolution officially thanked “PM Narendrabhai” for having “fulfilled the dream of crores of Indians to build a temple on the Ram janmabhoomi”. The state BJP executive, the resolution said, condemned all “pseudo-seculars who do not support Ram Mandir and spread lies about it”. The resolution declared that the opposition parties were still desperately trying to “instigate Indians” for the Modi government’s move to dilute Article 370 and revoke Jammu and Kashmir’s special status.

The Congress talks in “Chinese and Pakistani,” the resolution read.

The resolution is likely to be mirrored by BJP units across India. 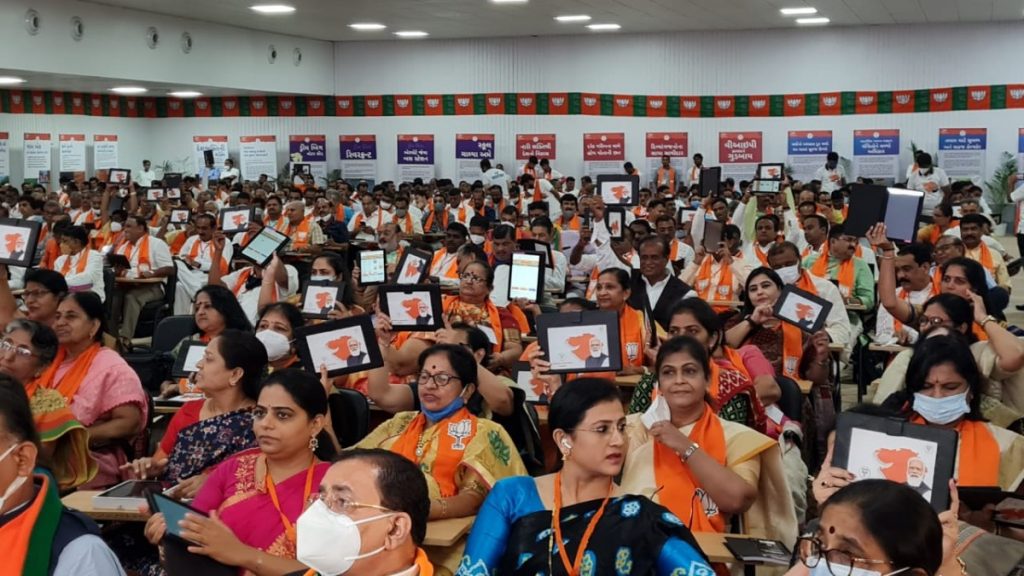 Besides the Hindutva push, it was evident that the BJP has mobilised its impressive poll machinery for a blitz in Gujarat.

The executive members will be guided on ways to campaign and each of them is expected to be active on social media in addition to meeting people and resolving their issues, said state BJP chief C.R. Patil, who had the country’s highest victory margin in the last Lok Sabha elections and is considered the “father of booth management” in Gujarat.

“We are ready to contest all elections,” he said. “Even in the cooperative sector elections, we will contest under the party banner and we will also issue mandates for voting. It is our responsibility to make you all win.”

In tablets given to party workers, the BJP has presented the party’s schemes and their implementation, with testimonials. The tablets also have the entire history of the RSS and the BJP and every speech made by BJP MPs and MLAs of Gujarat. Patil vowed to distribute 10,000 more tablets.

A Congress leader admitted to The Wire that the BJP’s preparedness for the 2022 elections was electrifying. “We don’t even have a president at the state or national level, or even a general secretary,” he rued.

Meanwhile, the BJP does not feel threatened by the Congress, unlike the last election, when the grand old party put up a fight but was stymied by factionalism and immature political decisions.

“The Congress has been reduced to issuing press notes,” a senior BJP minister told The Wire. “They have no presence or significance left in Gujarat. It is not even on a ventilator. The Congress in Gujarat is more Italian and American than Gujarati.”

It is the Aam Aadmi Party that seems to be more appealing to the people of Gujarat than the Congress, both in the rural and urban areas.

However, it seems unlikely that either of the parties will challenge the BJP. 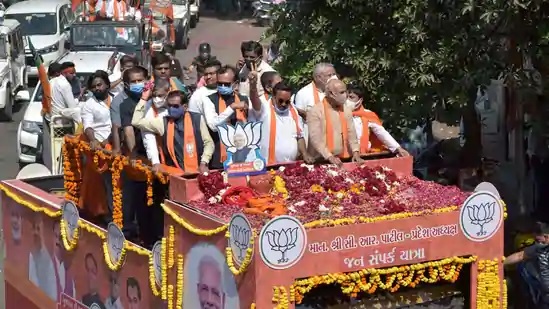 The move to return to aggressive Hindutva is strategically sound. Gujarat has always been the laboratory for all saffron experiments in the country.

Despite corruption, many man-made and natural calamities, and more recently demonetisation, the GST mess, the Rafale controversy and the pandemic, Gujarat has consistently been voting BJP since 1995, when Keshubhai Patel formed a majority government. There was a brief intrusion when Shankersinh Vaghela rebelled and formed his own party, the RJP. The party, with outside support from the Congress, ruled Gujarat in 1997. Later, Keshubhai Patel was again elected with a majority government.

It had appeared that Gujarat chief minister Vijay Rupani’s image had been sullied by the state’s disastrous handling of the second wave of COVID-19. According to a study by researchers from Harvard TH Chan School of Public Health and the University of California, Berkeley, 54 municipalities of Gujarat saw about 16,000 excess deaths between March 2020 and April 2021 as compared to the January 2019-February 2020. An investigation by Reporters Collective, published by The Wire, found that the state’s death toll may be undercounting deaths by 27 times.

Gujarat seems to have forgotten and forgiven.

The Wire spoke to 65 people after the state BJP adopted its resolution and 61 of those people said that though there were “minor glitches” that are to be expected during any natural calamity or pandemic, the BJP had done exceptionally well and taken all required measures to ensure a quick recovery from the impact of COVID-19.

Indeed, the BJP needs to be credited for being able to create this rosy image. Perception management has been the Gujarat BJP’s forte and it continues uninterrupted since 2001. Though there have been national and international reports questioning the state government’s claims on ventilators, death figures and hospital and ambulance management, the BJP in its resolution praised the Rupani government for being a “model state” during the pandemic. 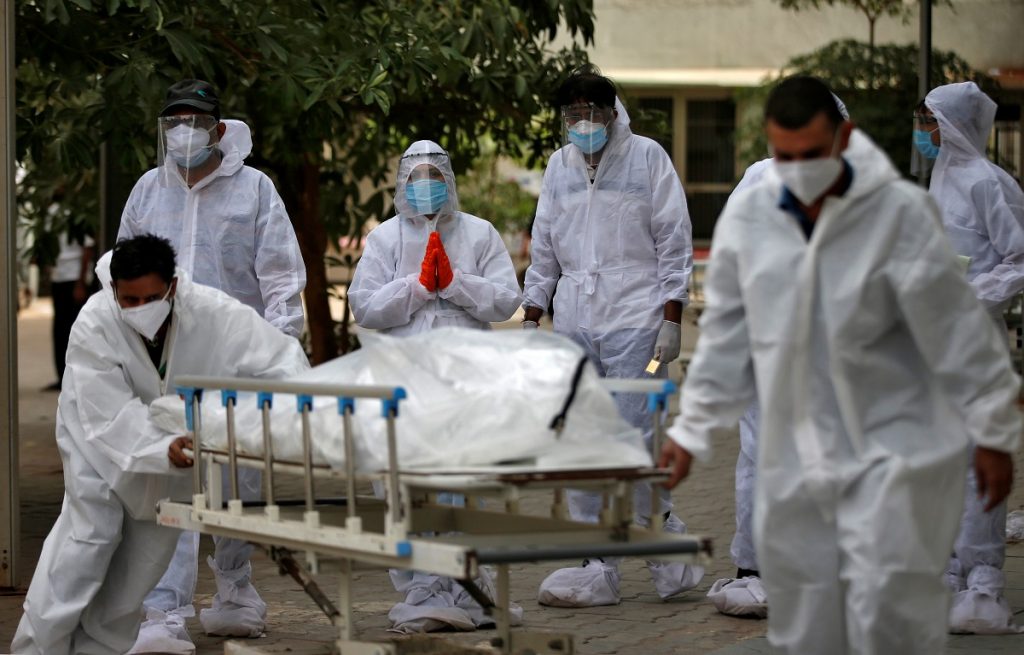 Relatives react as healthcare workers pull a stretcher carrying the body of a person who died from COVID-19 at a mortuary in Ahmedabad, May 8, 2021. Photo: Reuters/Amit Dave

“Whatever happens in the country, he has made it a job to protest,” Singh scoffed.

He advised the Congress to work hard rather than being cocooned in its shell at party headquarters across the country.

“The Congress party has to always import talent, whereas there is no dearth of talent in the BJP,” he claimed. Of course, he did not mention the many chief ministers the BJP has imported from the Congress, nor the MPs and MLAs whose defection it has overseen.

It was also clear that the BJP was still smarting from the drubbing in West Bengal at the hands of Mamata Banerjee. The Gujarat BJP executive resolution condemned Banerjee’s Trinamool Congress for indulging in “Congress-motivated political violence in Bengal”.

“They are ravaging properties of those who have voted and supported the BJP,” the resolution read. “Maximum people killed in Bengal are those who belong to non-Scheduled Tribes,” it emphasised.

“The Congress and pseudo-seculars are expectedly silent on this death of democracy in Bengal,” it added.