While women seem not to be abandoning Mamata Banerjee, the voting preference of many male voters appears driven by concerns about dharma, or religion – an issue that the BJP has aggressively campaigned on. 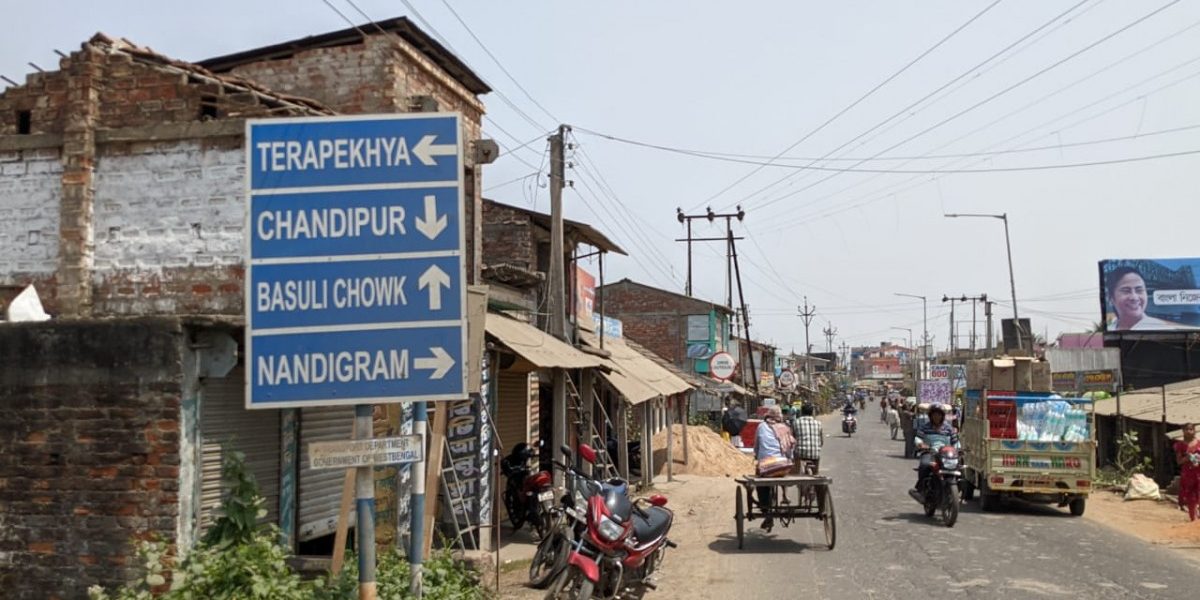 Kanthi/Egra/Ramnagar: A group of middle-aged men were sipping tea and discussing politics at the Kanthi (Contai) bus stand a day before the first first phase of voting starts—they summed up the political complexity of the region.

“No matter how much BJP jumps, Didi is coming back to power,” said Budhhadeb Maity. His friend Shukumar Samanta said, “BJP would have won this election, but by taking the chor (thieves) from TMC they made it difficult for them.” Another from the group joined the discussion, “BJP shouldn’t have taken that [person] (hinting towards Suvendu Adhikari) but that won’t stop us from voting BJP,” said Bapi Majhi.

Maity later explained, “All year long, TMC people remained with us and helped us. BJP now gives lofty promises and distributes money for votes, why will we support them? Has anyone from BJP helped one during [the cyclone] Amphan and lockdown.” Majhi on the other hand countered Maity by saying, “All Amphan assistance went to TMC people. People whose houses were not even damaged got the money. Suvendu Adhikari’s men did this. But this time we are voting for change. We want to change this government.”

Purba Medinipur remained a Trinamool bastion even during the 2019 Lok Sabha election, when BJP bagged 18 of the 42 parliamentary seats. TMC had leads in 14 of the 16 assembly segments in the district, while the BJP was ahead in two segments—Egra and Panskura Paschim.

But a tectonic shift happened on December 19 last year when Adhikari, Mamata Banerjee’s former trusted lieutenant, switched over to the BJP. He and his family controlled the east Medinipur district for close to 15 years.

While Adhikari was still with TMC, the BJP made inroads in this district. Even though the saffron party couldn’t win a single Lok Sabha seat from this region, they successfully secured second position displacing the Left Front.

Now, with the Adhikari family joining the BJP, the party is in a better position in terms of election machinery and booth presence in the districts. And while there is also an anti-Suvendu (Adhikari) mood prevailing on the ground, the saffron party’s attempts to inject religion into the race is helping it to counter this factor.

Babul Mondal, a resident of Kanthi, was angry with Adhikari. “We wanted to defeat [him]…  I am so angry with BJP now, why did the party give  his family a place in the party? My vote was for BJP but not anymore.”

Pintu Naskar of Durmuth gram panchayat said, “We are against Suvendu. The kind of torture his men did on us was unimaginable. He is king of tolabaji (extortion) and today he is accusing other TMC leaders of tolabaji. But this time ,we will vote for Jai Sri Ram. Just that we don’t want the  Adhikaris. But it is important to replace the government this time.”

Asked why he thinks replacing this government is ‘important’, Naskar said, “For two reasons – first, during Amphan the kind of loot they (TMC) did, common people suffered a lot. Secondly, TMC favours Muslims a lot. Why should the CM get angry when someone says Jai Sri Ram?”

While touring the district, another broad observation made was that women voters are strongly consolidating in favour of TMC.

For example, this reporter came across a group of women sticking BJP flags on tree branches in Nandigram’s Shonachura. When asked who they will vote for in this election, all smiled but none gave an answer. But as soon as the men with them moved to other the side, one woman in a lowered voice said, “I will vote for Didi.” All of them echoed the same opinion as they looked back frequently to make suree no one hears them.

Forty eight-year-old Parul Das of Benodia gram panchayat in Chandipur said, “Who do we have other than Didi? Does anyone else care for women? My daughter is a graduate today because of her (Mamata) Rupasree scheme. My son goes to school on a cycle given by the government. Will any government do this? Till the day I am alive, my vote will be for Didi.”

To develop a Hindutva churn and polarise people on communal lines in a district where over 85% of the population is Hindu requires exceptional organising and hard work. The BJP has successfully done that in Purba Medinipur.

Raju Majhi of Satilapur village in Ramnagar II block told The Wire. “This election is not about how much work the government has done or not. This election is only about ‘dharma’ (religion). We will vote for Jai Sri Ram.”

When asked if it concerns him if the BJP candidate is a turncoat, Majhi said, “We are not even thinking who is the candidate for the BJP. We are voting for the symbol. Only that matters to us.” This time, the BJP candidate from Ramnagar is former CPI(M) MLA Swadesh Ranjan Nayak.

Krishnendu Kunila from Depal Hat said, “We don’t want Didi anymore. This time we want to change the government.” When asked why he wanted to see a change, Kunila didn’t respond. 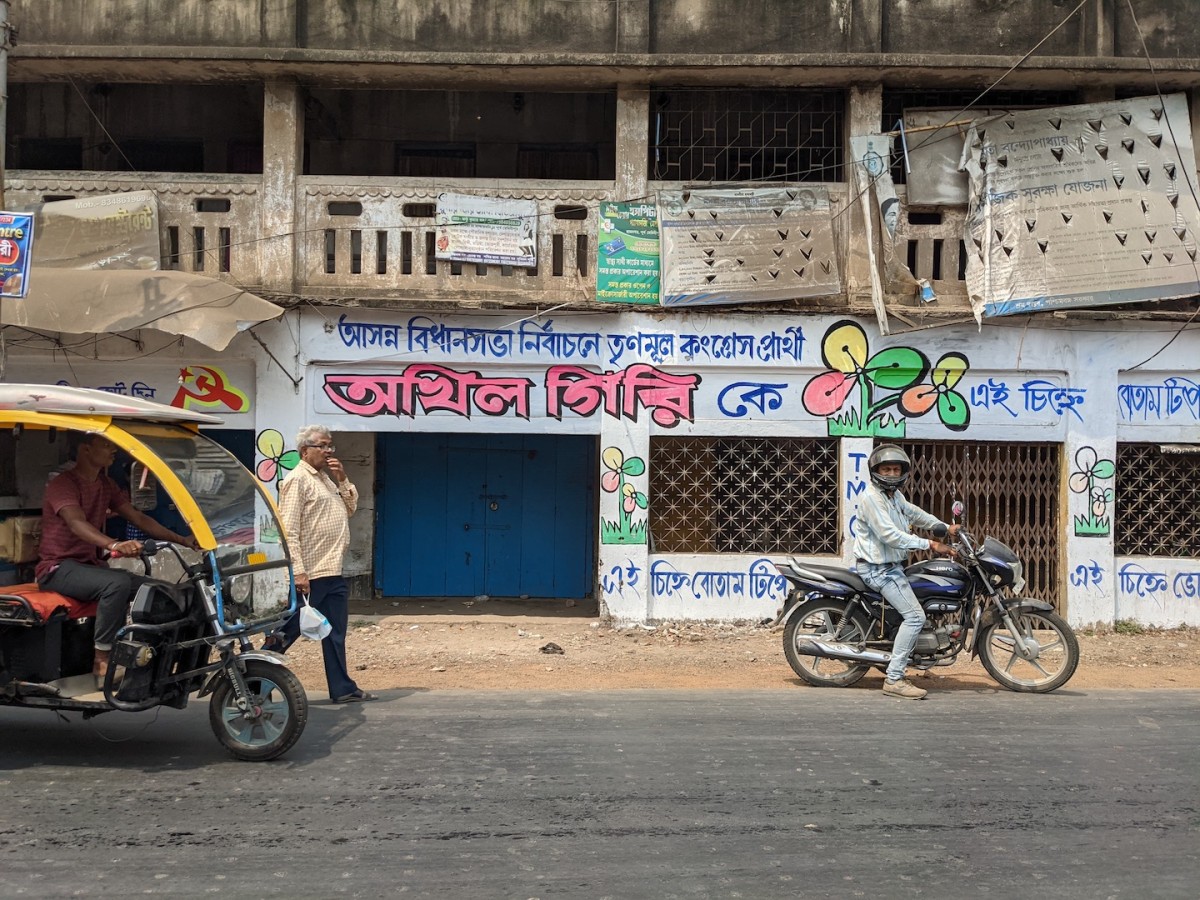 The BJP is finding takers for its call for a ‘double engine sarkar’ – that West Bengal be ruled by the same party in the state as at the Centre. takenPhoto: Himadri Ghosh/The Wire

The Hindutva churn is so strong that a 52-year-old Modi supporter, while praising the prime minister, said, “Manmohan Singh Ji gave biryani to Kasab, Modi is giving bullets to terrorists.” When asked how that is relevant for this election, he said that is the ‘only’ thing relevant this time. “More or less my family has got many benefits from the TMC government. Benefit from Kanyashree, Rupasree, an old-age pension for my mother, free ration, swasthya sathi (health insurance) card. But this election is not about all these, this election is about saving your dharma (religion). We can’t turn Bengal into another Bangladesh. No problem with Didi’s development, but now we need a stronger CM who can stop Muslims from coming and occupying our land here.”

Next, we stopped at a tea stall in Khargram gram panchayat under the Patashpur assembly constituency. Its owner, Biswajit Maity, said, “We live in Hindustan, why can’t we chant Jai Sri Ram? This the land of Ram. Do we have to go to Pakistan to say Jai Sri Ram?” When asked about the issue of this area, “Do you not believe religion is an issue? This election is about religion. We want CAA/NRC. Will Mamata Banerjee give that to us? Why should Muslims from Bangladesh come here and stay here? All this has to be stopped, so we want double engine sarkar.”

‘Double engine sarkar’ is a phrase coined by the BJP leaders, which literally means having the same government in both state and centre. The BJP message that the  “same government in state and Centre means seamless operations and more development” is finding appeal among a section of voters.

A barber in Balisai bazar, Tapan Mondal, said, “Didi is coming back. Let BJP do whatever they want. They talk big, but where were they during lockdown? Didi gave us free ration, even now she is giving us for free. Without that free rice so many of us would have died.”

Swapan Dandopat of Jamki gram panchayat said, “TMC local leaders looted money of poor people after Amphan. I request Didi to take steps against them. But there is no one other than Didi. BJP is a dividing force, they must be stopped from coming to Bengal. Today, the price of gas, petrol, vegetables, and oil skyrocketed, and Modi couldn’t do anything. And he says he will make ‘Sonar Bangla’. We are with Didi no matter what. Just that she should strongly deal with corruption in the party.”

Bimal Jana of Bishnubarh in the Nandakumar assembly segment, a retired central government employee, said, “The BJP is the death knell of this country. After selling all government-owned companies, they are saying they will give jobs. They can only fool people, they can’t do anything else. This party covers up real issues and only divides people on religious and caste lines just for electoral benefit. If they stay in power for one more term, India won’t exist.”