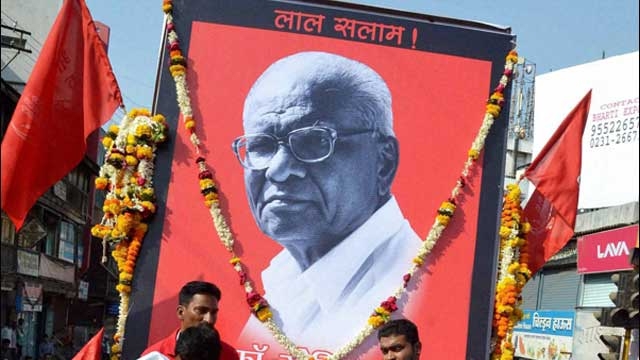 Mumbai: Two and a half years after the assassination of Communist party leader Govind Pansare by gunmen allegedly linked to the Sanatan Sanstha, an allied group of the Goa-based Hindutva outfit has levelled charges of “corruption” against him and demanded a probe be held by the Central Bureau of Investigation.

In two separate press conferences held in Mumbai and Kolhapur, Hindu Janjagruti Samiti (HJS) activists claimed that the Shramik Nagari Sahakari Patsanstha (SNSP), a cooperative bank that was started by Pansare many years ago, had received mysterious deposits totalling Rs. 45,51,352 in the financial year 2015-16.

Pansare succumbed to his injuries in Sholapur on February 20, 2015, before FY 2015-16 started. He was the second rationalist to be killed in Maharastra after the slaying of Narendra Dabholkar in 2013.

Speaking to The Wire, Pansare’s daughter, the scholar Megha Pansare, rubbished the Hindutva camp’s latest claims, calling it a “desperate attempt” to divert attention from the ongoing agitation against the recent killing of senior journalist Gauri Lankesh in Bangalore. “They are afraid that their organisation would once again be questioned in Gauri’s murder. So they are only making desperate attempts to divert attention towards some non- existent scams,” she said.

Lankesh’s assassination has turned the spotlight back on the Sanstha and other Hindutva groups with investigators noting similarities between her killing and the murders of Pansare, Dabholkar and Kannada litterateur M.M. Kalburgi, who was shot dead in Dharwad in August 2015.

In its press conference, the HJS said a sum of Rs 45,51,352 had been deposited in the name of the Communist Party of India (CPI) in the co-operative society. “There have been several transactions worth several lakhs under the name of CPI in this bank since 2008. Neither the party nor the cooperative bank has declared this amount,” alleged HJS’s lawyer Sanjeev Punalekar. He further alleged that the amount was unaccounted for and not declared even to the Election Commission of India (ECI).

Punalekar said the HJS has already written to the Election Commission, Income Tax department and CBI. “We will wait for them to initiate action. If not, we would move the Supreme Court of India.” He said the details of these deposits were obtained through applications made under the Right to Information Act. While The Wire has reviewed these documents, it cannot independently vouch for their authenticity or confirm that they disclose any impropriety.

Although Pansare was involved in the launching of the SNSP over 35 years ago, Megha said her father was never directly involved in its working. “I can vouch for its trustees and say these allegations are completely baseless. I will soon be meeting my lawyers and initiating legal action against [those making these allegations].”

The Shramik Nagari Sahakari Patsanstha is one of many organisations Pansare was involved with in his over six decades of activism. “The cooperative has been serving the peasants in the (Kolhapur) district and especially those working in the unorganised sector for several decades. Each and every rupee of this bank is accounted for. Earlier, they targeted my father and his political convictions, now they are using innovative methods to malign him,” Megha said.

Pansare was a well-known historian whose Marathi book, Shivaji Kon Hota? – Who Was Shivaji – is a best-settler.

According to the special investigation team (SIT) of the Maharashtra police, sadhaks (members) from HJS’s sister organisation, Sanathan Sanstha, were involved in Pansare’s murder.

Pansare and his wife Uma were shot at on February 16, 2015 by two motorcycle borne men when they were returning from a morning walk. While Pansare succumbed to his injures four days later, his wife was left seriously crippled from her injuries.

The SIT first arrested Sameer Vishnu Gaikwad from Sangli, an alleged Sanathan Sanshta activist in September 2015 and chargesheeted him as one of the assailants. Months later, the Central Bureau of Investigation, which was investigating Dabholkar’s murder, arrested another person, an ENT doctor from Panvel, Virendra Tawde, for his supposed involvement in the Dabholkar murder conspiracy. Tawde was allegedly an active member of the HJS, an off-shoot of the Sanstha. The SIT sought his custody in Pansare’s murder and later he was named a co- accused in the case and a supplementary chargesheet was filed against him in November 2016. Gaikwad, at present, is out on conditional bail.