With the recent spate of resignations from the party and a deep sense of anger against the government, BJP has come to realise that it cannot win the elections without resorting to communal politics.

Panaji: The recent ‘temple’ remark by Goa chief minister Pramod Sawant has stoked controversy and even put several BJP leaders in an uncomfortable situation. Political observers from the state believe such a statement was “uncalled for”.

“Some temples that were destroyed during the Portuguese rule were rebuilt by our ancestors, and now, the government has also helped in the beautification of some of these temples. There are more temples that are left to be rebuilt. In the 60th year of liberation, we want to start rebuilding the temples that the Portuguese destroyed. I ask you to once again preserve Hindu Sanskriti and Mandir Sanskriti. I ask you to give us the strength to rebuild these temples,” Sawant said while speaking at a public meeting in Ponda on December 21, 2021.

In another instance, in the first week of October 2021, Sawant, while inaugurating a church in Ribandar, said, “Even during the Portuguese rule and after they left, there was no difference between Goans on the lines of caste, creed or colour. But today, I want to specifically make this point, religious conversion forces have entered Goa. I want to remind Goans to be on guard.”

What explains such statements laced with communalism and aimed at polarisation when elections in the state are less than two months away?

The Wire spent the last 10 days of December 2021 visiting various constituencies across the state in order to understand the prevailing mood and political dynamics. One broad trend that has come to the fore is that there is a wave of deep anger against the ruling dispensation in Goa, cutting across religion and caste demographics.

Growing unemployment, rising prices of essential commodities and rampant corruption over the current government’s 10 years in power have contributed to the anti-incumbency.

In the last two years, Goa has also witnessed mass protests against government projects like the proposed IIT-Goa project at Shel-Melauli, the double-tracking project by the South Western Railways and also against illegal construction of bungalow-connected to a BJP leader from Mumbai on a heritage site in Old Goa.

Is the BJP trying its hands at polarisation to offset the effects of anti-incumbency, which is growing by the day? Political observers in the state believe so.

Also read: Ground Report: Goa Wants Change, But Isn’t Sure Who to Vote For

Speaking to The Wire, advocate and political analyst Cleofato Coutinho says, “The anti-incumbency is so high that recent imports from other parties are not enough. The development plank is also not working. So, the BJP is back to basics. Do what it is good at. Polarise. The statement of Goa’s chief minister that temples destroyed during the Portuguese rule must be rebuilt is a direct attempt to divide the society on communal lines. It is against the Places of Worship Act, which orders the status quo. The CM and BJP as an organisation have no popular impact like Manohar Parrikar. So, this is their last desperate attempt.”

How was Parrikar’s politics different?

Between 1999 and 2007, three assembly elections were held in Goa. Its worst performance during that period was in 1999 when the party managed to win 10 seats. In 2002, BJP registered its best performance by securing 17 seats in a 40-member assembly. 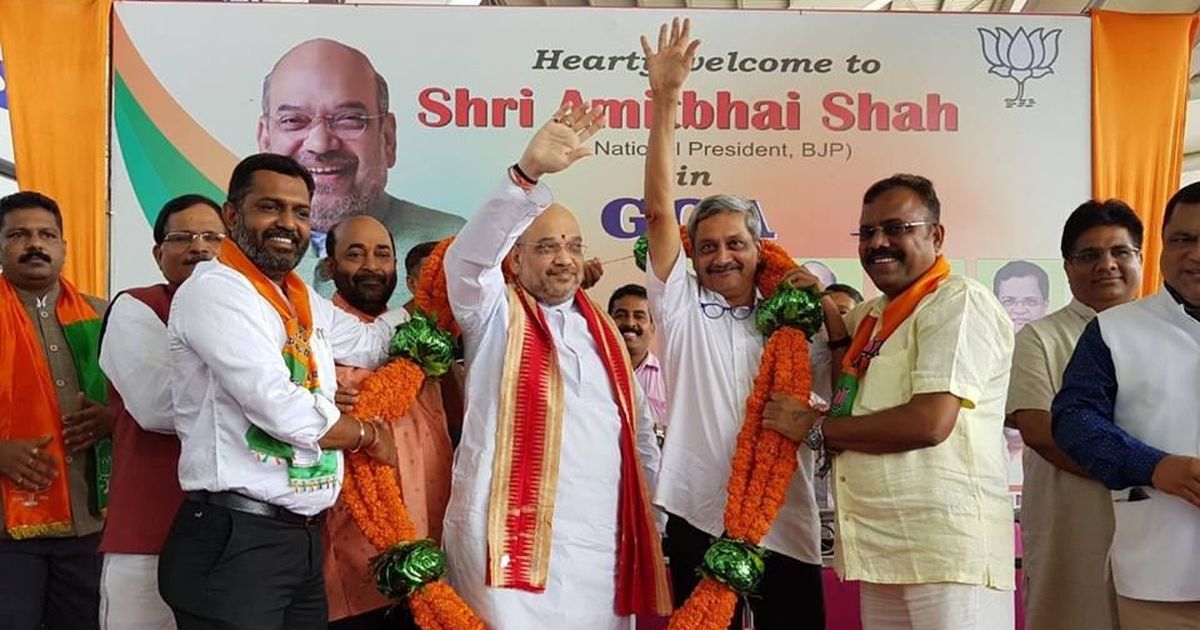 File photo of Amit Shah, Manohar Parrikar and others at the event at Dabolim airport, Goa. Photo: Facebook/BJP Goa.

In the 2012 assembly election, for the first time, BJP fielded six (20%) Christian candidates and all of them won. In the elections before that, the party fielded just two Christian candidates. Again in 2017, the saffron party further increased Christian representation and fielded eight candidates, and of whom seven were elected.

If one closely looks at Goa’s demography, Salcette, Mormugao, Tiswadi, Quepem and Bardez talukas, comprising 17 seats, have a sizeable number of minority voters, accounting for 40%, who significantly determine the electoral outcomes. What’s more, there are another seven seats in the state where minorities account for more than 25% of the votes.

Parrikar understood that without Christian votes, BJP can never form a government of its own in Goa. Parrikar even maintained cordial relations with the Church. One of BJP’s poll promises directed at the Christian community in the 2012 election was representation for the community in government jobs in the state.

A lot has changed now. On taking a closer look at current political developments, it shows that BJP’s Christian MLAs are primarily upset with the party’s functioning. Two MLAs, who recently resigned, are Christians. Vasco MLA, Carlos Almeida, and Cortalim MLA, Alina Saldanha, resigned last week. Both are also known as Parrikar loyalists.

Senior minister and MLA from Calangute constituency, Michael Lobo, has been critical of the party leadership. “Today, the party has become commercialised. The party is now only guided by the principle of importing winning candidates, irrespective of their background. Loyalists of the former chief minister in the state are being sidelined,” says Lobo.

Speaking to The Wire, a BJP MLA from South Goa, who does not want to be named, says, “Calangute MLA Michael Lobo and Canacona MLA Isidore Fernandes may resign and join some other parties.” Again, both are Christian MLAs from BJP.

Also read: Is There a Conflict of Interest in a Prominent Goa Media House’s Close Links to BJP?

The South Goa MLA further adds, “Chief Minister’s temple remark was unwarranted. Many leaders and workers of our party were hurt because of the statement.”

Former ZP member from Curtorim, Moreno Rebello, who recently joined BJP in the presence of the chief minister, resigned on December 30, following reports of attacks on churches and Christians in various BJP-ruled states, especially in Karnataka.

“Recent developments across the country, especially against minorities, pained me. People from my area exerted pressure on me to leave the BJP. Ever since I joined BJP, I was getting suffocated. I pulled myself out of a problem which I had myself created. I am at peace now,” Rebello said while speaking to the media.

It appears that the chief minister’s recent comments are in line with BJP’s new strategy of employing hardcore Hindutva politics mixed with Konkani pride, which is unusual for Goan politics. Political analysts believe BJP’s focus is to consolidate Hindu votes and win maximum seats.

Speaking to The Wire, veteran Goa journalist from the state Sandesh Prabhudesai says, “BJP has lost its charisma after Manohar Parrikar. Corruption has reached its peak. It is losing ground day by day. Getting 10 more MLAs from Congress and two from the MGP [Maharashtrawadi Gomantak Party] was a clear sign of its weakness. By getting more Congressmen and other sitting MLAs of GFP [Goa Forward Party] and Independents to fight the upcoming election was the second sign of desperation.

With minorities no more supporting the Hindutva party, dropping the Christian MLAs is the third sign of desperation. And trying to polarise voters by making statements like rebuilding demolished temples is yet another desperate attempt. The real challenge now before the BJP is to get back its party cadres whom they sidelined in almost 18 constituencies for its power-hungry games. I think Goan voters are wise enough to analyse this and react accordingly when voting.”