The way the saffron party has stormed in with high-profile campaigners and money power holds important lessons for the TRS and even other regional parties elsewhere.

The just-concluded GHMC elections in Hyderabad ended on a victorious note for the BJP, though it ended up with fewer seats than the ruling Telangana Rashtra Samithi (TRS). Though it was a municipal corporation election, the results hold greater interest for the manner in which the BJP storm trooped with little organisational power and few local leaders but with an image, agenda and of course money power. There might be lessons here for those facing the BJP in elections in the near future and also for parties in Telangana, since this trend might continue until the next assembly elections.

What makes the election and the ensuing results intriguing is that there was no generic anger against the TRS. It is not that people had made up their mind to vote out the TRS, yet with the BJP offering an alternative, people are willing to test them. The BJP came with a skimpy agenda of polarisation and changing the name of Hyderabad to Bhagyanagar. Apart from this, Amit Shah promised to make Hyderabad a ‘mini-Bharat’ and ’emancipate’ people from ‘Nawabi rule’.

One must concede that the BJP has commendable organisational skills and appreciate the energy it demonstrated in a municipal election. The energy is coming from both its ideological vision and the excitement of making inroads into new states. Compared to the Congress, which looks clueless and exhausted, the BJP had many of its national leaders, including Amit Shah campaigning in Hyderabad. It shows a sense of purpose and seriousness when one demonstrates that kind of grit to win. Campaign, money spent and the glitter that comes with it made the people of Hyderabad sit up and take notice of the elections, which are even otherwise fought with zest as Hyderabad is a resource-rich corporation.

While Hyderabad has a history of communal riots, there have not been any major ones for the past three decades. In spite of the emphasis on ‘Ganga-Jamuni tehzeeb‘ there are mutual prejudices and grouses between the Hindu and Muslim communities. Muslim ghettoisation is like any other ‘modern’ city, restricted to the Old City and a few adjoining areas. The community once formed the cream of the ruling elite but has currently slipped down the development index and has poor educational standards.

Also Read: Hyderabad: How KCR Ceded Ground to the BJP in GHMC Elections

While prejudice and latent dynamics have existed from both ends, communal politics was usually submerged under the discourse of development and promises of harnessing the city as a hub of information technology. Why should the Hindu middle class have its head turned by the communal discourse at this stage is a bit of a surprise.

In spite of TRS leaders, in particular K.T. Rama Rao, reiterating many times during the campaign that the BJP will bring communal violence and disturbance – which are inimical to development, the citizenry do not seem to see the BJP that way. One may have to note that there has been irresponsible communal talk by Akbaruddin Owaisi of the AIMIM in the past. Some definitely would like to see the Owaisi appear less exuberant and aggressive. This undoubtedly provides an immediate entry point to the BJP. 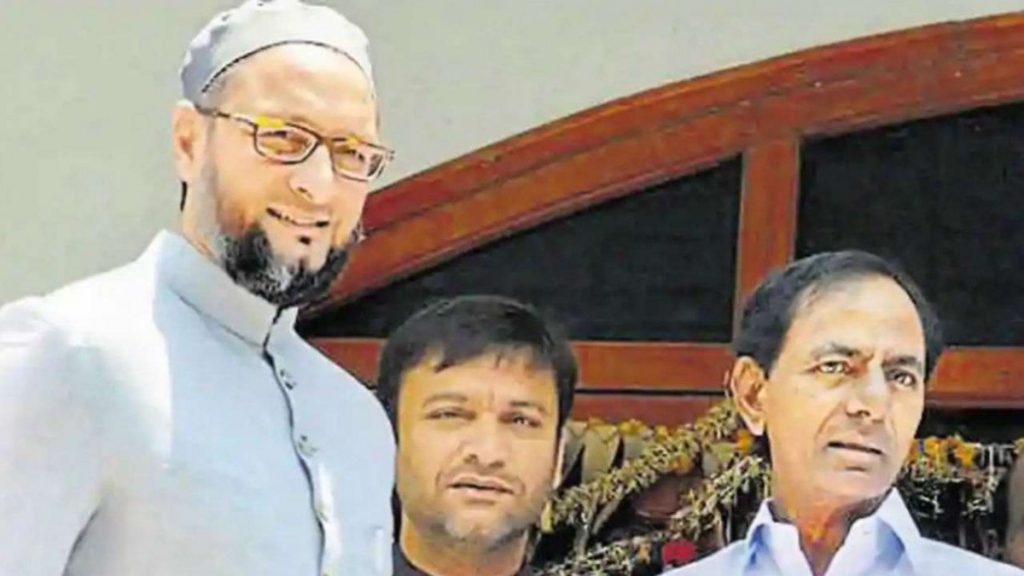 Alienation of the youth

While the TRS continues to be reasonably popular with most sections of the society due to its various welfare policies, one section that its leader KCR has antagonised is the youth. Both his inability to provide government jobs in the new state, his contempt for higher education, and his hubris and method of personalised governance never went well with the youth, who were the backbone of the movement for a separate state. Many of them have switched sides to the BJP, as was the trend during the recent by-election that BJP won in Telangana. Here, the rhetoric of ‘dynasty rule’ and the BJP presenting itself as an ‘anti-establishment’ political force has purchase for the young.

Money could have also played a role in engaging many of the unemployed youth: Giving them the responsibility of organising the party and the cultural purpose of ‘saving’ Hindus does well to the otherwise injured self-esteem of the youth in a newly formed state, who nursed high aspirations of qualitatively better lives that have not come to fruition.

The BJP combines a macro-level Hindu narrative and stitches it to various micro-level issues of caste, and other identities. Caste Hindus, professionals and upper middle classes are voting for the BJP, perhaps for its high voltage ‘development’ talk but also partly latent communal prejudices and the critique against dynasty rule.

The saffron party also did well in areas where Hindus and Muslims reside in close proximity. Caste-wise it would appear that it is mostly the Hindus among the Other Backward Classes (OBCs) who are moving to the BJP. OBCs were the social base of regional parties, across India. In Telangana they were the force behind the TDP but after the bifurcation of Andhra Pradesh, the TDP was no longer a viable option in the new state. They are now moving to the BJP.

Also Read: Why the BJP Is Campaigning Aggressively in Hyderabad’s Local Body Elections

Hindu OBCs are also the social section living in proximity to the Muslims and in the past they were involved in clashes with the Muslims. This, of course, also has to do with mafia-type economic transactions, including land deals where muscle power matters. This is how the BJP patronised T. Raja Singh, who was the face of the party until Bandi Sanjay took over. Both belong to the OBC community and represent a muscular Hindu sensibility.

Alongside caste, the BJP performed well in areas of Hyderabad where settlers from Gujarat, Maharashtra, Karnataka and Andhra Pradesh reside. The BJP’s nationalist pitch might look assuring to these sections, in spite of the fact that they have been in the city for generations. Latent regional and cultural sensibilities and anxieties could well be at work. The nationalist narrative provides assurance to the sections which have anxieties. Today, the BJP has carved out a space as the only ‘national’ force, despite the fact that it actively divides and rakes up anxieties and prejudices between communities. Here, regional parties like the TRS have little reach when they begin to think more in terms of their regional identity. The ‘outsider’ sense exists, in spite of Hyderabad’s reputation as a cosmopolitan city.