Is the Garo Customary Law Bill Saving the Tribe or Breaking It?

The ﻿﻿Garo Hills Autonomous District Council has passed a Bill that will limit membership of the tribe to only those children whose parents are both Garo. 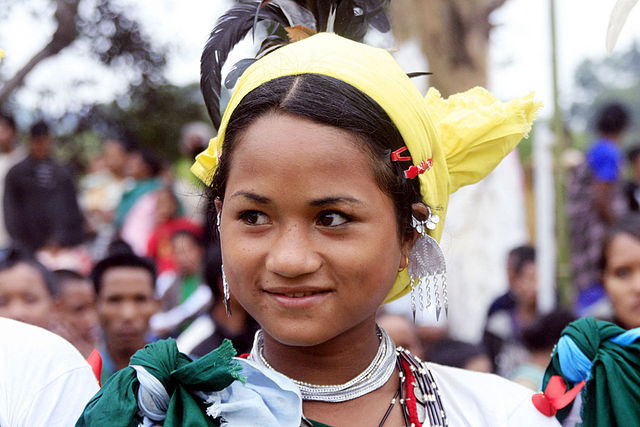 The Garo community is divided over the Bill to restrict the tribe according to customary law. Representational image. Credit: Wikimedia Commons

In northeast India, the sentiment to maintain bloodlines runs like a livewire through the numerous tribes and communities scattered across the region. Politics centres around a fear of being reduced to a minority in the homeland. For the smaller tribes, immigration and cultural assimilation pose serious threats, both culturally as well as economically. The issue has haunted tribes in Meghalaya, where the politics of ‘protecting’ the tribe or the community has produced some of the most controversial events over the years. Even with chief minister Mukul A. Sangma – who was born to an Assamese Muslim mother – leading a cabinet consisting of several people from mixed heritages, the state is now confronted with a legislation passed by its lower counterpart – the Garo Hills Autonomous District Council (GHADC). The legislation, Codification of the Garo Customary Law Bill, 2009, essentially strips all Garos born of inter-community unions, of the right to be members of the tribe.

It is no coincidence that over the past decade, Sangma’s claim of being a Garo man has been contested by his detractors in the courts, starting from the lowest rung of the judiciary to the Supreme Court and back again.

As per the legislation, only the offspring of both Garo parents will be identified as Garo. All others will cease to have that right. The Bill was passed in the budget session of the GHADC on March 29. If or when this Bill gets the consent of the governor, it will become law and leave thousands without their community identity. Ironically, some of the members who passed the Bill will themselves be affected if it becomes law.

The Garo tribe follows matrilineal traditions, where the children inherit the mother’s family lineage and clan. This trait is the hallmark of the tribe. The Bill has simply ridden over this cultural ancestry, axing the very root of the Garo community. Inexplicably, the contents of this Bill is markedly different from the old Bill that was circulated.

Naturally, the Bill has been divisive for the Garo community, fracturing it into those for and those against. It affects each and every family, and especially the many families where one parent is not Garo.

There was the qualification that the Bill will only be effective from the day it becomes law, which seems doubtful at this stage. In all likelihood, the governor will send it back seeking clarifications.

“I think the Bill was passed in haste. It needs to be reviewed,” Conrad A. Sangmai, Lok Sabha MP from the Tura (Garo Hills) said. Because his father-in-law was not Garo, his children would have no right to be a member of the Garo tribe if the Bill becomes law.

Ironically, his party, the National People’s Party was in power in the GHADC when the controversial Bill was shepherded through, with 18 out of 29 members voting for it. It is to be noted that this Bill has been circulating for several years.

‘No need to review’

On placing the Bill in the GHADC session, the chief executive member, Denang T. Sangma called it a historic moment because this piece of legislation was crucial for the survival of the Garo as a tribe, seeing how the race is being diluted.

“This is the most important legislation drafted by the GHADC in all its 65 years of existence” he said.

He brushed aside the call for further discussion on the clauses of the Bill saying it had been reviewed more than 40 times by a review committee with members from across Garo society.  As far as he was concerned it was a ‘now or never’ moment. The ‘now’ got the momentum.

Organisations such as the  Garo Students Union (GSU) hailed the Bill calling it a move to protect the customs, traditions, language and culture. They are concerned with the eroding culture of the Garo.  According to them, many people claim to be ‘Garo’ only to gain access to the rights assured to tribals under the law. Under the existing laws non-tribals or tribes from outside the state are not allowed to buy or do business within the territory of the GHADC. Experts point out that ancient Garo custom recognises the adoption of a non-Garo bride into the family by her adopting the clan title of her father-in-law, but this custom has been abused to such an extent that it is being used to entitle men from highly patriarchal communities who marry Garo women. There are many cases of non-Garo males getting married to Garo women and then being ‘adopted’ into the Garo family and given the right to the family lineages. This has distorted the customs effecting the tribal land rights and inheritance systems, they said.

However, the Denang T.  Sangma’s assertion that the Bill was considered by the community and got approval does not hold water, as dozens of groups and individuals have questioned his claim.

Immediately after it came to be known that such a Bill was passed, people concerned about the lack of transparency formed the All A’chik Citizens Forum in Tura. They accused the ruling NPP of taking these steps to malign the tribal status of Sangma, the chief minister.

Meanwhile, the citizens of Williamnagar, the second most important town in the Garo region, met on April 12 to do a reading of the controversial Bill of 2009 for the first time. Representatives of the churches, Nokma Council East Zone, All India Garo Union, Mother’s Federation, heads of institutions along with important citizens and intellectuals, found that the Bill was full of loopholes, discrepancies and jumbled up. “For one, what should have been the most important point of the Bill, that is, the definition of a Garo, was placed under the section dealing with musical instruments”, said Kroshneil D. Sangma, a regional author-researcher of Garo culture and history. He told this writer that the Bill recognises that there are 12 regions reflecting the diversity of Garo cultural heritage, including marriage customs, dialects and beliefs. But the Bill does not properly reflect a single one of the regions. Besides, for some reason, some portions are in the Garo language while others portions are written in English.

Did the members of the GHADC even read it, some wanted to know after going through the Bill. S.M. Sangma, who called himself a ‘pure blood’, said if they wanted to protect Garo rights they could have done it in a better way by identifying the kind of people who take advantage of the matrilineal system, instead of wiping out the identity of genuine Garo citizens, whatever their parentage.

The president of the All A’chik Citizens Forum, Gamchi R. Marak, who also happens to be the vice-chair of the Meghalaya State Women’s Commission said the people reject the Bill. It was not even placed in the public to give them a chance to make suggestions. This Bill is in conflict with the existing laws of the land, and is against women. Commenting on the Bill, she told this reporter that some parts are frivolous and redundant in the 21st century, such as the clauses which say that women cannot beat the drum or play the flutes. It will not hold out under scrutiny of legal experts and then it will be rendered useless after all the tamasha of passing it. The GHADC should have considered all this so that the Garo people can truly be protected with a properly crafted law, she said, terming the current Bill as ‘just a gimmick’.

It is true that the Bill does not conform to the ancient Garo customs. This is confirmed by well known academic, Milton A. Sangma, the doyen of Garo cultural studies and one who has chaired many a session on codification of Garo customs and traditions during his career spanning decade. As early as in 1984, the Garo Graduates Union had wanted a law to stop non-Garos “taking advantage of availing special privileges provided under the sixth schedule by marrying tribal women and cases of tribal women marrying non-tribals and being converted to non-tribals.”

Things have only got worse now. But the Bill does not address this issue.

Meanwhile, the Khasi Hills Autonomous District Council (KHADC) has come out with its own surprise last week. It cancelled the scheduled tribe certificates which had been issued to a pair of siblings from a well known business family of the capital on allegation of doubtful Khasi ancestry. But the saving grace here is that the KHADC already has its own lineage law called the Khasi Social Custom of Lineage ) Act, 1997, which guides it’s decisions in such cases.

The Indian constitution recognised the need to safeguard tribal customs and protect them from globalised and national trends by setting up institutions like the sixth schedule as legal barriers. How well it is used, is up to the tribal leadership, as we have seen over the past decades. It is to be noted that these tribal councils under the sixth schedule have to abide by the precedents set by constitutional laws. As for the question that is so consuming the GHADC and the Garo people today, the Supreme Court has already settled that question in a landmark judgement (1965) that co-incidentally emerged from this same state. In the famous case, Khasi politician, S.D.D. Nichols Roy, born of a non-Khasi mother, had to prove his right to be a member of the Khasi tribe and the judgment has always been quoted as precedent for any dispute in these matters.

But then, as legal history has proven, the judiciary could consider that in the 21st century, the small tiny tribes are under extreme stress and if not careful about their customs, could end up counting its members based on the amount of ‘original blood’ of the tribe still flowing in their veins, as is happening in the case of the Native American people whose population has been assimilated over the centuries.

In the midst of these controversies, an allegation has surfaced against the GHADC for plagiarising more than 100 items in the Bill  along with definitions and concepts from a paper presented at a workshop on Garo Customs held last year. The paper was presented in the Garo language but has been allegedly translated word for word into English in the contentious codification of the Garo Customary Law Bill 2009. The claim will soon be made public.