Forget Lutyens, the Gandhis Must Also Vacate the Congress Space

A certain surreal absurdity has come to gnaw at the centre of democratic opposition to the Modi regime. Till the Congress’s ruling family bows out of the picture, the fight against creeping authoritarianism will just not take off. 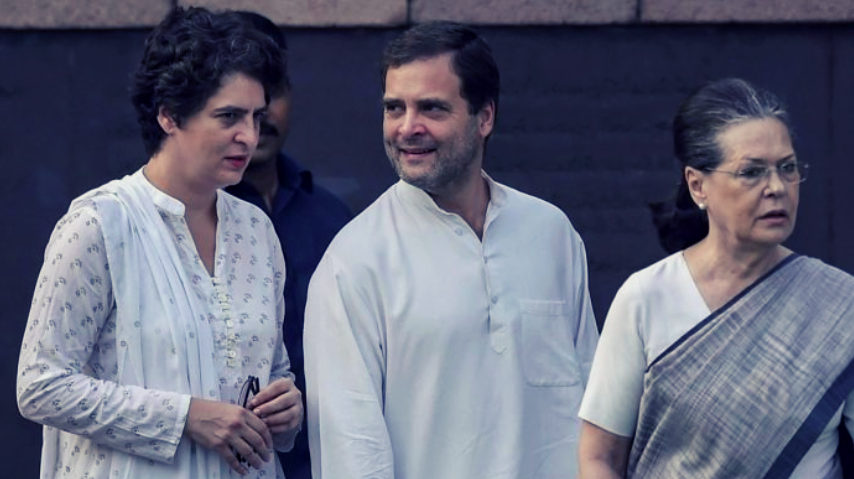 Hopefully one will not get slapped with a charge of sedition if it were to be disclosed that Narendra Modi’s most cherished – and the most secret – desire is to match Jawaharlal Nehru’s record of three consecutive Lok Sabha mandates.

For now, he looks all set to achieve this perfectly legitimate dream, primarily because he seems to have acquired the unsolicited services of the great man’s great-grand-children, Rahul Gandhi and Priyanka Gandhi Vadra.  Between  them, the brother and sister are determined to make Modi look like a sober and responsible leader.

If the reports seeping out of the last two Congress Working Committee meetings are to be believed, it appears that not only do internal equations remain far from sorted out but that the bhai-behn-cartel (BBC) remains unrelenting  in its fratricidal war against what it calls “the seniors” in the  party. Thanks to the BBC’s entitled recklessness, the principal opposition party is pathetically bleeding from internal, self-inflicted wounds.

In normal times, no one would have lost sleep over the  brother and sister accusing Congress seniors of political cowardice and arrogating to themselves the distinction of undiluted, extravagant  opposition to Modi; but, the longer the brother-and-sister duo continue to  scuffle within, the much-needed process of democratic recovery and regrouping gets postponed further and further.

To understand the gross distortion of priorities, consider this: the Nehru family once lodged itself firmly in the national imagination when Motilal Nehru handed over his palatial Anand Bhavan in Allahabad to Mahatma Gandhi’s Indian National Congress, the then principal voice of the Indian people. Now, that very party finds itself pitiably reduced to protesting in tasteless language the dislodging of a scion of that family from a government bungalow. This is what happens when a political party brazenly allows itself to get reduced to a family affair.

And there seems to be no way out of the family cul de sac. Even after two inglorious defeats at the national level, the Gandhis continue to behave like limpets, to use that sneering expression Rajiv Gandhi’s abuser-in-chief, Mani Shanker Aiyar, had once cockily used for the Opposition leaders.

And, in the process, the Gandhis have prevented the Congress from undertaking the basic task, a sine qua non for any party in a healthy parliamentary system, of an honest understanding  and analysis of reasons for two comprehensive defeats.

In this case, the Family is entitled to its dislike and its resentment of Modi but the Congress as a political party is under an obligation to want to understand why millions and millions of Indian voters seem to prefer him over the Gandhis’ Congress.

In particular, the Congress has to unsentimentally comprehend why Modi is able to run away with the deshbhakti ball and (to use American football terminology) get to score a touch-down at his choosing while the Gandhis prove very poor defensive linebackers. Nor has the bhai-behn cartel offered the country any moral reason to shift its allegiance and affection away from Narendra Modi.

The Gandhis have managed to lock the Congress is a layered conundrum. Rahul Gandhi continues to think, presumptuously, very poorly of his own party. He thinks it is someone else’s fault that this instrument of many national transformations has become a rusted, rotten organisation, beyond repair. He and his sister have conveniently convinced themselves that the ‘old guard’ are a stumbling block in their righteous struggle against Modi.

At the same time, he is not enthusiastic about taking over responsibility as party president, notwithstanding the fact that a handful of political entrepreneurs have heavily invested their ambitions, hopes and self-interests in a Rahul Gandhi-led Congress. He is happy to exercise power without responsibility or accountability.  Nor would the Gandhis facilitate the transition to a non-Gandhi – not even to a U.N. Dhebar, leave alone a Kamraj – presiding over the AICC at 24 Akbar Road. 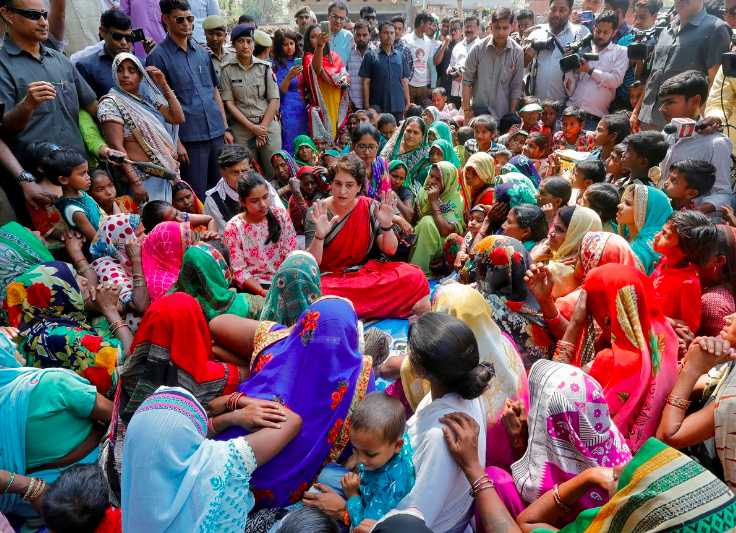 There is no easy way out of this conundrum which has now acquired a dysfunctional stranglehold on the imagination and initiative of whatever remains of the ‘rank and file.’ There is the sister’s restless energy and there is the brother’s petulance that the ‘seniors’ are not excited about his periodic bursts of political naivety.

But both hear the call of their DNA. Between the two of them, they have done rather well; a great organisation has been reduced to its pale shadow. Perhaps this could be laughed off as a matter to be sorted out between the party and its ruling family but the Congress’s internal paralysis has consequences beyond the 10 Janpath-Tughlak Road-Lodi Estate triangle.

Rahul Gandhi’s political infirmities, particularly his continued obsession with Modi, have given democratic dissent a bad name, that too at a time when the nation is experimenting with social pain  and economic deprivation on a mass scale.

There is no doubt that Narendra Modi has overstepped every single red line that ought to have inviolable sanctity in a democracy. A creeping authoritarianism, an unapologetic arbitrariness, a cloying personality cult, a wilful abuse of state’s instruments, browbeating of the judiciary, shackling of the media, exulting in money power and much more. Cumulatively, Indian constitutional  democracy stands drained of all its vitality. 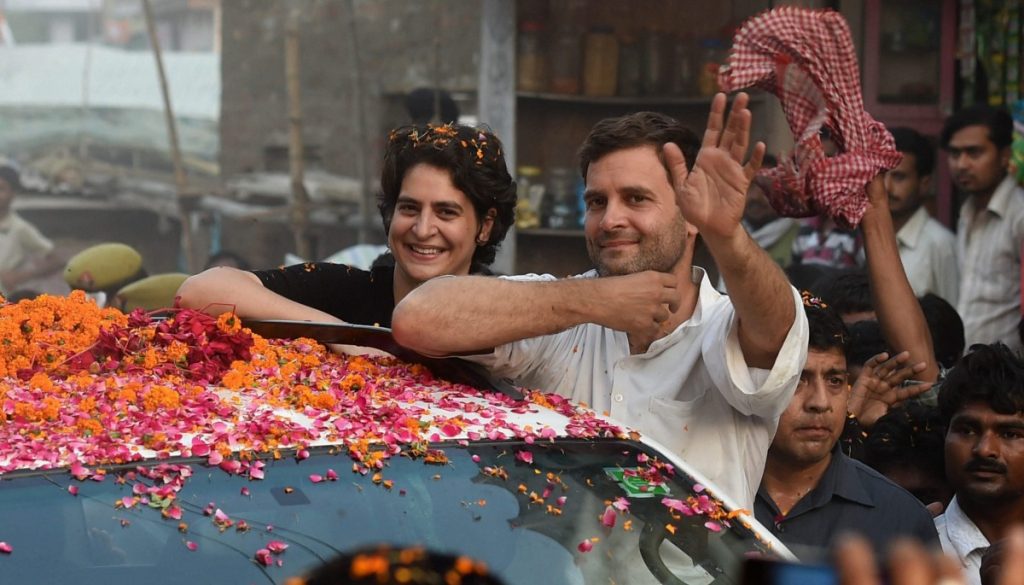 Priyanka Gandhi, alongside Rahul, sucked up some of the oxygen of publicity and attention that Modi had come to take for granted, ahead of the 2019 polls. Photo: PTI

Admittedly, state power will contaminate, corrode and corrupt. This is the nature of absolute power. A bonfire of vanities has already been lit in the Galwan Valley. However, despite having been shown up – first in the COVID-19 crisis and then in the LAC battle – the ruling cabal can afford to feel unfazed and unbothered because the BBC-led opposition remains feeble and unheeded.

Modi and his coterie can claim credit for having shifted the centre of gravity of Indian politics; the concerns, sentiments, assumptions and priorities they have  grafted on the political exchange have moved the Indian polity very far from the centrism of the Vajpayee-Manmohan Singh era. If India’s democratic and progressive voices care for liberal values and constitutional niceties, they need to confront the reality that an undemocratic Congress of the Gandhis cannot be the instrument of democratic deliverance.