A Bizarre Spin on the Spinning Wheel

The charkha in Gandhi's hands stands for a lot more than the act of spinning. Featuring Narendra Modi on the 2017 khadi calendar is a dangerous misappropriation. 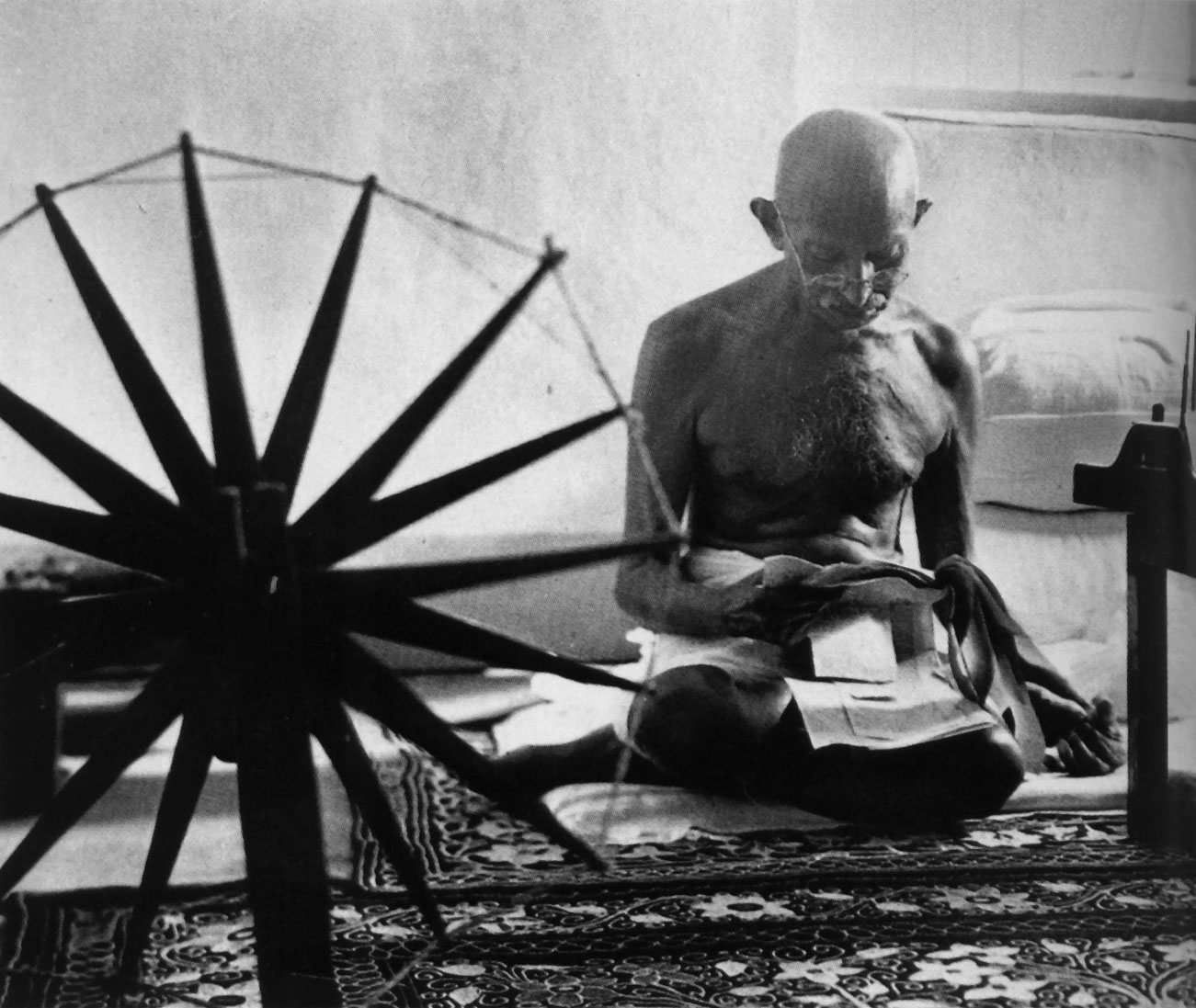 The prime minister featuring prominently in the traditional spinning pose of Mahatma Gandhi in the 2017 wall calendar and table diary published by the Khadi Village Industries Commission is the post-truth event of the year. The image is bewildering not because of any sentimental reasons, but for historical, political and ethical reasons associated with Gandhi and the spinning wheel. It is necessary to carve out those reasons sharply in an era where political, cultural and economic institutions are bent upon inventing meanings that ring hollow and lend themselves to dangerous misappropriation.

“There is an art that kills and an art that gives life,” wrote Gandhi in Young India on August 11, 1921. He was speaking in favour of spinning the wheel and producing khadi. It was not just the idea of self-sufficiency that Gandhi associated with the spinning wheel, and nor did others who associated the historic act with Gandhi merely read it as a symbol of self-sufficiency. The symbol of the spinning wheel meant other significant things: of attending to a work that appeared boring without any sense of boredom, of labouring for a pleasure without privilege, of simply doing one’s work that consists of a single motion, of doing a work as monotonous and singular as spinning. Spinning does not only mean an activity but also denotes a space, where the task of rotating a simple machine and weaving cloth out of it takes place. Threads are the fruit of labour and the source of joy. One never produces enough thread in a day even after hours of spinning. There is a non-capitalist imbalance in the equation between doing and producing, as much as between time and production. Gandhi was not merely producing cloth to sustain a home-grown industry and the idea of self-sufficiency, but producing a specific relation between time and work in the process.

The idea of giving “life” by spinning cloth meant a self- regenerative process for Gandhi, where a certain meaning of self-fashioning was taking place. On March 28, 1945, Gandhi wrote in Sevagram,

“Do spin and spin after due deliberation… ‘Due deliberation’ means realization that charkha or act of spinning is the symbol of non-violence. Ponder; it will be self-evident.”

We can see the connections emerging from this statement. The act of spinning was an act of deliberation, an act of the will. It was a will to be non-violent. If spinning was an activity of deliberation, it was the opposite of the idea of provocation. Gandhi spun in the face of provocations during the anti-colonial movement not simply as a political message to his opponents and to power, but to create a space where the self-at-work can be sovereign within that activity. Spinning created a space for negotiating with power. Gandhi realised the only way to challenge modern (colonial) power is by creating a place where the self can announce its own sovereignty, its own will and a strength to produce for itself. Gandhi’s spinning of the wheel symbolised the soul of Satyagraha, which was also an act of protest, against the devious means of the colonial regime to have a claim over the coloniser’s time, will, sustenance and sovereignty.

Today, even though in concrete terms the idea of such an industry does not rule over the economics or discourse of production, the larger meanings of Gandhi’s enterprise are worth pondering over as ways to negotiate with the violence of industrial productivity. This violence, born from the division of class interests between owners and workers, confronts labour with the burden of productive goals that endlessly expand and exploit labour time. The idea of self-sovereignty, producing work at one’s own pace without bothering about a larger industrial logic of profit-making, is worth thinking over in an era when capitalism is on a death drive.

The other, related aspect is the idea of slowness that Gandhi associated with the idea of ethical life. “Good travels at a snail’s pace,” wrote Gandhi in 1909 in Hind Swaraj. It may be interesting to compare Gandhi’s views on slowness with Milan Kundera’s observations in his novel Slowness. Kundera writes, “There is a secret bond between slowness and memory, between speed and forgetting.” Forgetting has become an unnoticeable malady, a wound that people are suffering from without realising it. Despite Italo Calvino’s praise of speed and quickness as mark of human agility and creativity, it is also time to ponder over the limits and devastations that have been caused by speed. To say like Carlo Levi, in his introduction to the Italian edition of Lawrence Sterne’s Tristram Shandy (quoted by Italo Calvino), “Death is hidden in the clocks”. It precisely describes the tragedy of modern technological life, where a machine external to the working of the body controls the lifespan and vitality of the body. The gradual disappearing of memory and the clock turning larger than life are the limit situations of our life-world. This mechanisation of life and the erasure of the human would not have surprised Gandhi.

But the most political and ethical core of the reason why Gandhi is irreplaceable from the idea and the image of the spinning wheel is related to non-violence. During Gandhi’s sojourn in Noakhali during the communal riots of 1946, spinning was an exceptional act in the face of an atmosphere completely ridden with violence. Apart from the element of self-control, the act of spinning also contributed to a calm and soothing effect to people in the ashram. Since Gandhi believed it is impossible to meet violence non-violently without a certain practice that enunciates a peaceful mind, spinning granted that mode of peaceful restrain against the news and provocation of violence in Noakhali. Gandhi’s spinning khadi was not just an act of industry but also imbued with a responsibility and commitment to non-violence.

The prime minister and his regime can make no similar claims. No sincere attempt has been made to counter or discourage violence against minorities and Dalits. There have been relentless moves to police and make illegal democratic protest. Apart from token gestures made towards national self-sufficiency, corporate houses and big business have been given a big nod. Instead of serving the truth, media houses defending the regime have indulged in rampant manufacturing of lies. The image of the prime minister spinning the charkha seems totally out of place. This bizarre spin on the spinning wheel is one more tricky delivery in the playground of the nation’s political culture.

Manash Firaq Bhattacharjee is a poet, writer and political science scholar. He has recently contributed to Words Matter: Writings Against Silence, edited by K. Satchidanandan (Penguin, 2016). He is currently adjunct professor in the School of Culture and Creative Expressions at Ambedkar University, New Delhi.