From Shoes to Chairs: A Short History of MLAs Being Violent in State Assemblies

A throwback to several instances of opposition members resorting to violence inside state assemblies and even parliament. 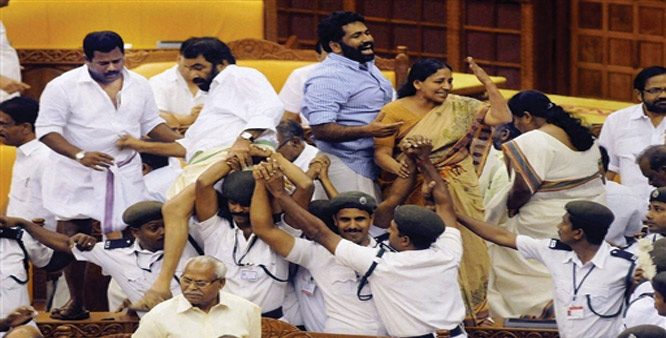 Video screenshot of an altercation in the Kerala legislative assembly. Credit: Youtube

When Iraqi journalist Muntadhar al-Zaidi threw both his shoes at then US President George W. Bush during a press conference in Bahgdad in 2008, he was simply protesting against the US invasion of Iraq. Little did he know that his actions would become a worldwide trend, making shoe-throwing an international sign of protest.

Several Indian politicians have found themselves the targets of disgruntled shoe-throwers in the years since al-Zaidi first demonstrated the method. In April 2009, then home minister P. Chidambaram, former Prime Minister Manmohan Singh and then leader of oppositon L.K. Advani were all targeted in different places. Chidambaram was targeted at the Congress headquarters in New Delhi by Jarnail Singh, a Hindi journalist. Singh was allegedly angry at Chidambaram for not answering properly when he was asked about the CBI giving a clean chit to Congress leader Jagdish Tytler in a 1984 anti-Sikh riots case. Manmohan Singh found himself on the receiving end of a shoe at an election rally in Ahmedabad and Advani was targeted by a former BJP district vice-president in Katni town, Madhya Pradesh.

But while all these attacks took place in public spaces, on Wednesday a new chapter entered the annals of shoe throwing. On the last day of the Punjab assembly’s session, a Congress MLA successfully hit Bikram Majithia, a Punjab minister, with his shoe.  Though the shoe-hurling MLA in question, Tirlochan Soondh, later claimed that he had intended to hit Virsa Singh Valtoha, a Shiromani Akali Dal MLA and not Majithia. Apparently, Soondh’s action was prompted by Valtoha abusing him but the latter denies this. Valtoha has said he will quit politics if the assembly proceedings’ video recording shows him abusing Soondh.

The incident came in the backdrop of another recent historic intervention by the Congress in the Punjab assembly. As many as 23 party legislators on Monday refused to leave the House and stayed there overnight – to protest against the Speaker’s decision to allow a debate on the no confidence motion moved by them which was defeated by a voice vote.

These incidents in Punjab, coming towards the fag end of the last assembly session of the state, which heads into elections early in 2017, are a grim reminder of how state assemblies and even parliament have witnessed an increase in the number of violent incidents in the past few decades.

Some of these instances really stand out.

Way back in January 1988, a month after M.G. Ramachandran passed away, the Tamil Nadu assembly witnessed some serious violence when supporters of his widow, Janaki clashed with J. Jayalalithaa’s supporters, who was then a Rajya Sabha MP and is currently the state’s chief minister.

Janaki, who had the support of a larger number of MLAs was asked to prove her majority in the House, but at the eleventh hour, the 60 MLAs were told that Rajiv Gandhi had opposed the motion. Thereafter five MLAs turned rebellious and announced their resignation. In the House, a free-for-all ensued and the MLAs of the two All India Anna Dravida Munnetra Kazhagam (AIADMK) attacked each other which whatever they could lay their hands on. From mikes that were wrenched out to chairs that were flung, everything turned into a projectile. Some supporters even threw chairs from the gallery.

The mayhem lasted for an hour and normalcy was only restored after the police entered the House, lathi-charged the MLAs and cleared the premises. By then 20 legislators had suffered injuries, over 100 mikes had been broken and several chairs damaged.

Just a year later on March 26, 1989, the Tamil Nadu assembly witnessed another riot – this time between the ruling DMK and the now-united ADMK party led by Jayalalithaa. According to reports on the incident, this time saw prominent leaders targeted along with regular party members – Karunanidhi’s sunglasses were broken, an MLA allegedly tried to disrobe Jayalalithaa and some people tore the budget papers.

The ruckus started as soon as Karunanidhi, then the finance minister of Tamil Nadu, stood up to read his budget speech. A Congress MLA shouted out that Jayalalithaa, then the leader of opposition, had been getting harassed by the police. Jayalalithaa also stood up to back up the MLA’s claims and said that the chief minister had used the police to harass her and that the government’s head was “corrupt”. Before Karunanidhi could reply, the situation turned violent, as one of Jayalalithaa’s MLAs rushed towards him and Karunanidhi fell after losing his balance. Microphones, slippers and books were hurled across the room as legislators from both sides entered the fight.

As Jayalalithaa tried to rush out, the DMK minister for public works, Durai Murugan blocked her path and clutched her sari as she called out for help. She later used the incident to demonstrate how unsafe the House was for women. She vowed “never step foot inside the House until conditions are created for a woman to attend the assembly with dignity” and returned as a chief minister in 1991.

In the north, Uttar Pradesh witnessed a really ugly battle in its assembly in 1997. The BJP was in power then and Kalyan Singh was chief minister. It was on October 22 the day the House was plunged into pandemonium soon after proceedings began at 12 noon. As Congress Legislative Party leader Pramod Tiwari traipsed in demanding the division of the House, he was followed by a group of Bahujan Samaj Party MLAs, one of whom allegedly threw a small loudspeaker at the Speaker’s chair.

This triggered a brawl and in the combat that followed House members freely used microphone stands, paperweights, glass shards and furniture to attack each other. As a result, many were left grievously injured.

While all these three instances involved a large number of MLAs, there have also been cases of individual attacks within the Assembly. One of them took place in Delhi assembly on September 14, 2007 when Congress MLA Bhisham Sharma physically assaulted BJP chief whip Sahab Singh Chauhan. He was subsequently suspended for a day by the Speaker of the House.

Similarly on November 10, 2009, four members of the Maharashtra Navaniramana Samithi were suspended for four years after they assaulted an MLA who took the oath in the House in Hindi since he could not speak Marathi.

Another instance of misdemeanour in the House was reported in December 2011 when a Congress MLA tried to throw a chair at the Odisha Speaker. However, the assembly staff promptly snatched it away and the Speaker escaped unhurt.

Another eastern state, West Bengal, which witnesses a lot of political violence outside the Assembly, saw one of these skirmishes within the House on December 11, 2012. MLAs from the ruling Trinamool Congress and the opposition Communist Party of India (Marxist) started fighting each other when the Speaker refused to allow a discussion on an issue regarding a chit fund.

State parliamentary minister Partha Chatterjee alleged that Left MLAs had attempted to attack the Speaker during the skirmish. The Left on the other hand claimed that TMC members had pulled the hair of a Left woman MLA, Debolina Hembrom. The tussle left three legislators injured.

In 2013, the Tamil Nadu assembly found itself in the spotlight again when opposition members came to blows with rebel MLAs. The ruckus began after a Desiya Murpokku Dravida Kazhagam MLA, Tamilazhagan praised the chief minister (not from his party) for her efficiency and found support from fellow rebel MLA, Michael Rayappan. His other party MLAs did not approve of this conduct and confronted him. In the chaos, someone punched Rayappan, who retaliated in a similar manner.

Such incidents have not been confined to the assemblies. In 2014, there was a pepper spray attack by three MPs in the Lok Sabha, following a ruckus over the introduction of the Telangana Bill. 16 Andhra Pradesh MPs were suspended as a result of the violence.

And very recently on June 30, independent MLA, Abdul Rashid Sheikh and Peoples Conference legislator, Bashir Ahmad Dar nearly came to blows in the Jammu and Kashmir assembly after abusing each other during a heated argument. They even threw some papers at each other before they were restrained.

Similarly, on July 13, Karnataka forests minister, B Ramanath Rai and some BJP MLAs almost came to blows in the assembly after the latter made some remarks about the minister’s physical appearance during a debate about a police officer’s suicide. Allegedly, the BJP MLAs moved menacingly towards the minister after he showed them his hand. However, the presence of mind shown by chief minister Siddaramaiah, who signalled for the marshals to intervene, prevented the situation from getting out of control.