Four Lessons for the Opposition from BJP's Electoral Successes

The recent assembly elections have once again brought to the fore how much the BJP has changed the political landscape, and why no longer anachronistic beliefs about Indian politics work. 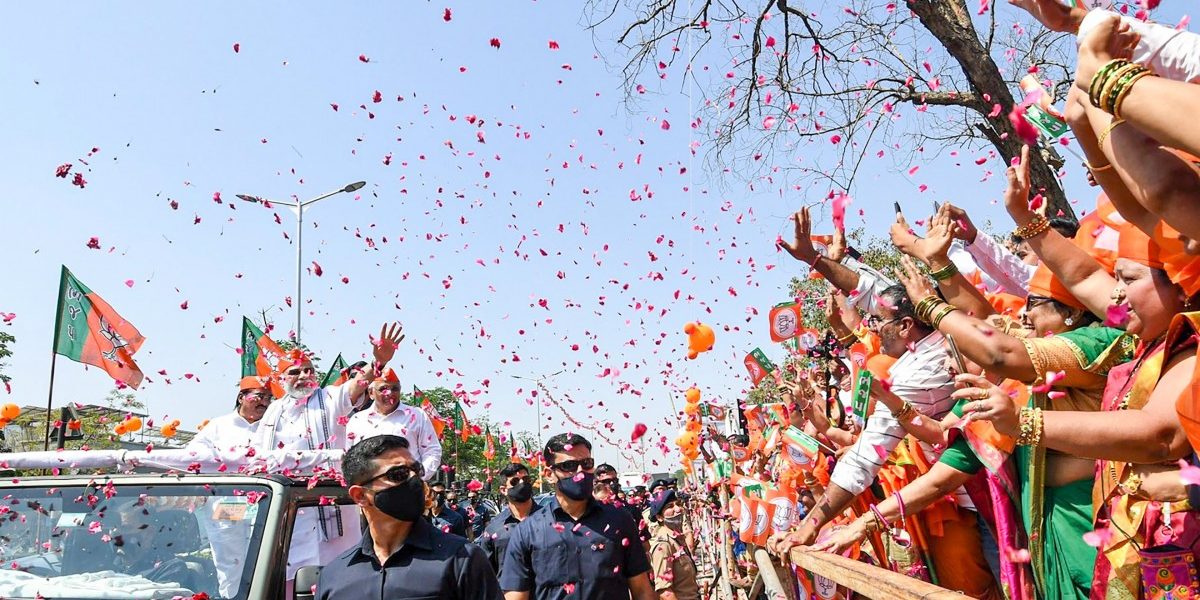 Prime Minister Narendra Modi waves at the supporters during a roadshow after BJPs victory in the recent Assembly polls, in Ahmedabad. Photo: PTI.

There could be light at the end of the tunnel if one is prepared to learn the right lessons from the 2022 Assembly results rather than jump to a lazy conclusion that it is all about Islamophobia. One has to understand that Muslim bashing is working alongside many other narratives and strategies, which are ploughing their way through simultaneously.

BJP’s long-term sustenance is coming from bringing the social/cultural dynamics and politics together. It is the only party that has the ability to think of cultural issues, even if they are blatantly exclusionist and majoritarian.

The question the opposition needs to ask is what is an alternative way to negotiate the social terrain. The secular parties have negotiated culture either by avoiding or playing along. BJP might be communal, but it has a position about how or what it wishes to do with cultural and religious differences. It is offering a deep sense of belonging through its cultural symbolism.

Also read: Watch: What the Results in UP, Punjab, Goa, Manipur, Uttarakhand Mean for National Politics

It is the sense of belonging that is being turned into consent for communal hatred, not the other way round. The opposition, however, has none.

Samajwadi Party was a silent part of the Muzaffarnagar riots, and the Congress is no different. This is where the opposition needs to begin from, address social concerns to have political dividends. They need to bring communities together, organise cross-cultural dialogues and reduce anxieties. A new vision needs to be built, for it is not readily available.

Dr Ambedkar had signalled very early that ‘constitutional morality’ has to be built, as it does not exist. He also said fraternity cannot be a constitutional principle. Such stellar observations drawn from the concrete reality should provide the entry point to questions such as:

What should inter-caste relations look like in the coming decades?

Days for tinkering with political alliances while remaining indifferent to social hierarchies and prejudices are over. This is a welcome change that is visible not only in the victory of the BJP but the defeat of AIMIM and the BSP. There is no ready ground, as there was none for communal rhetoric; it was arduously built by the RSS and its sister organisations.

The result also reflects now a deeply entrenched anti-elitist sentiment. The support for BJP is coming from its success in projecting itself through the local cultural idiom and resentment against top-down sermonising. This is where secularism has become a symbol of privilege and not tolerance.

The discourse on parivarwaad is symptomatic of not just dynasty but anti-systemic mood and even class struggle-like sentiments couched in cultural idiom.

We might blame the BJP for its neglect in managing COVID-19, but Akhilesh Yadav was no different. There was no show of compassion in his absence all through the second wave of the pandemic. Merely expecting others’ failures to become the source of one’s success is being challenged.

People are challenging being taken for granted while BJP is escaping this ire by responding to the changing sentiments. Unless people are presented with an alternative effort, they are unwilling to call the bluff on Modi. They will go along with teary eyes as a genuine act of repentance. It at least has the intention (niyat) to repent and respond directly to the people. In this is the failure of the opposition, more than the success of the ruling dispensation.

Joining and organising rallies in the last few months is not going to work any longer, for the BJP-RSS combine has upped the antenna of politics to be a 365-day contest. This is now a marker of sincerity, independent of the outcomes. Hard work is symbolic of a class positionality that people, most of who are in the deadly informal sector, can readily identify with.

None of the leaders of the opposition, with the honourable exception of Mamata Banerjee, come close to this imagery. Identifying with toil is an authentic sentiment, which cannot be unlinked from the likes of Modi and Yogi – unless there is a year-long effort to be linked to people and address their everyday concerns. This is what building organisation and motivating cadre should mean.

BJP’s rhetoric of rising above caste-religion is also a positive ethic notwithstanding the fact that BJP is running it alongside hardnosed caste calculus. It essentially appeals not at the level of annihilation of caste but breaking free from the hegemony and bullying of the castes in one’s proximity. In fighting those in proximity those with social power become a natural ally unless one finds a way out by bringing a bottom-up change.

The way Charanjit Singh Channi, Mayawati and Asaduddin Owaisi lost goes to show days for token representation are numbered and this is a much-needed change. Representation cannot be a hold-all standby for social justice. It needs to be backed by real-time redistributive efforts, short of that disempowered castes have no other alternative other than siding with those who are powerful and ready to be benevolent by accommodating them in their electoral calculations.

Again as Dr Ambedkar reminded us we are a society with “graded inequalities”. Those outside traditional hierarchies cannot reproduce the methods of the hegemon. Largesse from dominant castes is acceptable not from those who are perceived to be located laterally, from the latter only real-time change will be acceptable.

Economy through a cultural lens

What the results demonstrate is not culture trumping the economic hardships, but economic needs themselves being perceived through the cultural lens. The BJP has been couching its economic programme through cultural values. It can therefore afford to announce Ujjwala, but has the conviction to also announce refilling the cylinder remains the responsibility of the beneficiaries.

Further, within ‘transactional welfarism’, there is hardly anything to choose between the parties. It also has to do with the credibility of those implementing them.

The way out for the opposition is to move beyond transactional welfarism to structural welfarism. The opposition needs an economic programme that brings with it a new imagination of mobility and transformation in order to realise the patronage in the way BJP formulates and implements its welfare programmes.

As critical thinker Raymond Williams once put it, “to be truly radical is to make hope possible rather than despair convincing”. What all opposition has done is to make ‘despair convincing’. Merely by tweeting and going after Modi’s fraudulent methods and means is not presenting an alternative in itself. He is both the ruler and the opposition. He has offered a way out of despair through un-civility of communal hatred, and hope through nationalist posturing.

The opposition has only attempted to expose it without making efforts of its own. No effort is not necessarily better than a bad effort. People for now have decided to go with the latter to expose the former.