While the development does mean that the RJD is, once again, the single largest party in the state, the material advantages to the party are likely to be negligible. 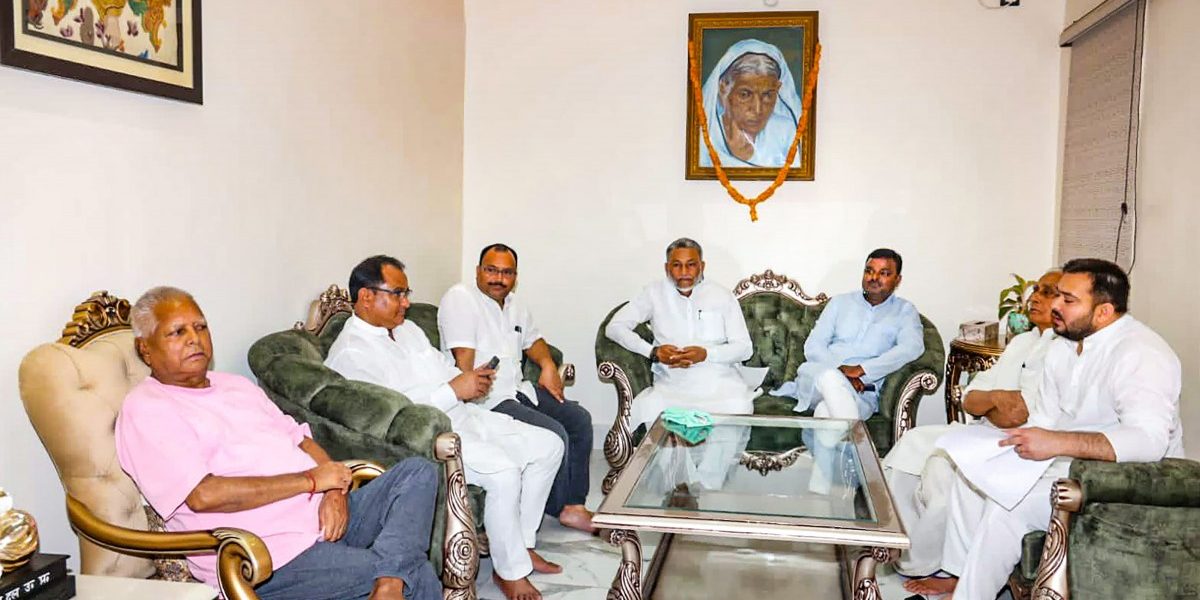 Patna: Four out of five MLAs of the All India Majlis-e-Ittehadul Muslimeen (AIMIM) in Bihar, which had registered a strong presence in the state’s Seemanchal area in the 2020 assembly elections, joined the Rashtriya Janata Dal (RJD) on Wednesday, June 29.

With this, the RJD has, once again, become the single largest party in the 243-seat Bihar assembly. Now, the number of RJD MLAs stands at 80.

Now the RJD has, once again, snatched the pole position from the BJP.

After the four AIMIM legislators joined the RJD, the question that is being asked is whether this is an effort by the RJD to form a government with the Janata Dal (United) (JDU). Leader of opposition in Bihar, Tejashwi Yadav, has categorically denied any such intention in a press conference.

From his statement, it seemed that all his efforts were made only to establish the RJD as the single largest party in the assembly once again.

“I am extremely happy to announce that when elections were held in Bihar, the RJD was given the mandate of the single largest party,” said Yadav.

“We all saw that BJP was not the largest party, but three VIP MLAs joined it. Now again, RJD has become the single largest party. There were 76 MLAs earlier and now four AIMIM MLAs have joined us. They have merged themselves with the RJD under constitutional provisions, so no one can challenge this merger,” he said.

Mohammad Shahnawaz Alam, MLA and younger son of RJD leader and seasoned politician, the late Taslimuddin, joined RJD and thanked the AIMIM for giving him a ticket. “You must have seen that assembly elections were held in Bengal and Uttar Pradesh. Our parties also fought elections but secular parties got stronger. The secular people of Seemanchal wanted us to join the most secular party of Bihar and address the plight of Seemanchal. So, I have joined RJD,” he said

On the question of a change of power, Yadav said, “We are not greedy for power. BJP and JD(U) are together. They are humiliating each other but are together. This makes clear how much greed for power is there in them.”

Sources said that ever since the three VIP MLAs joined the BJP, the RJD had started wooing AIMIM MLAs to join the party and that there was talk in the political corridor that AIMIM MLAs could join the RJD at any time.

However, Akhtarul Iman, MLA and state president of AIMIM had, in an interview earlier this month, categorically brushed aside the “rumour”.

“It’s just a rumour. In the assembly, I had clearly told RJD that if the party brings numbers, AIMIM will support RJD. So there is no question of AIMIM MLAs joining RJD. It is just a rumour and our MLAs are with the AIMIM,” he had said in the interview

One Wednesday, The Wire called him multiple times, but he didn’t respond.

Effect on the politics of Bihar

Despite the RJD becoming the single largest party again, it does not seem like this will much of a difference to the politics of Bihar.

Political observers believe that the JD(U) is not going to break its alliance with the BJP at the moment. As such, the latest developments are no more than the personal gain of RJD.

Political analyst Mahendra Suman told The Wire, “The RJD had lost the assembly election by a very small margin, so there was niggle in the party. With the joining of the four MLAs, that niggle has reduced a bit, but it is not going to impact politics of Bihar.”

“Secondly, with this merger RJD has strengthened itself in Seemanchal,” Suman continued. “If there was no (AIMIM supremo Asaduddin) Owaisi factor in Seemanchal, RJD would have got some electoral advantage there, but the victory of Owaisi’s party in the elections was a big setback for the RJD. Now, RJD may be feeling that it has gained lost ground in Seemanchal.”

“With this merger, a message is also being sent by these public representatives that Muslims are seeing their future in the secular party,” Suman said.

End of the road for AIMIM in Bihar?

The AIMIM made its foray into Bihar politics in the 2015 assembly elections and contested on six seats in Seemanchal, which consists of four districts – Araria, Kishanganj, Katihar and Purnia. However, it could not win a single seat. It got around 8% of the votes in six assembly areas. In the Kishanganj bypoll in 2019, the AIMIM opened its account.

In the 2020 assembly elections, when the AIMIM won five seats in Seemanchal, it was the centre of discussion in the political corridors. Many observers had said that Muslims were exploring their possibilities in AIMIM, apart from secular parties.

But in the West Bengal and Uttar Pradesh assembly elections, the party could not repeat these result and had performed poorly.

Experts believe that the jolt in the Uttar Pradesh and Bengal elections may have spurred the AIMIM MLAs to join RJD.

Senior journalist Manikant Thakur told The Wire, “The situation in Seemanchal is different, so AIMIM won there. That is not the situation in the rest of Bihar, so there is not much potential for this party.”

“Apart from this,” he continued, “the AIMIM’s performance in the Bengal and Uttar Pradesh elections was very poor, due to which the morale of the MLAs here (in Bihar) also fell and they felt that there is no future in being isolated in Bihar. That’s why they joined the RJD.”

“It is possible that they got assurance from the RJD that if the situation arises to form the government in future, they will be given some positions,” he further says.

Tanzil Asif, journalist and founder of Seemanchal-based hyper local web portal, Main Media, believes that while the AIMIM has only one MLA left with the party, it is not the end of the road.

“AIMIM has a strong hold on three out of the five seats it won. So it will not be easy for the RJD to win these three seats – Kochadhaman, Bahadurganj and Amour. Kochadhaman is also Akhtarul Iman’s home and he represented it thrice from 2005-14,” Asif told The Wire.

“Secondly, with the induction of the four MLAs, an internal fight may begin within the RJD. Two of these MLAs defeated senior RJD leaders Haji Abdus Subhan and Sarfraz Alam in assembly elections and those leaders are still with the party, while on a third seat, Kishanganj,  RJD district president Sarwar Alam’s father was defeated.” Asif said.