Kokrajhar MP Naba Kumar Saraniya said the accord was a way and means to form a possible parallel state or a Union Territory in Assam. 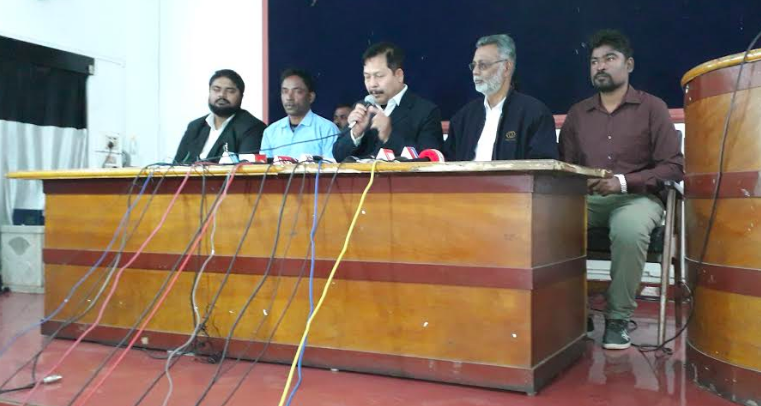 Guwahati: A few hours prior to the signing of a new Bodo peace accord between the Centre, the All Bodo Students’ Union (ABSU) and the four factions of the National Democratic Front of Bodoland (NDFB) on Monday in New Delhi, the former ULFA commander and Independent Kokrajhar MP Naba Kumar Saraniya said a conspiracy was afoot to keep all non-Bodo groups in the dark.

Saraniya, alias Heera Saraniya, said the accord was a way and means to form a possible parallel state or a Union Territory in Assam.

Saraniya while addressing a press conference along with representatives from O-Bodo Surakhsa Samiti (Non-Bodo Protection Committee) questioned both the BJP-led state and Central government for the delay in settling for a peace accord.

He also questioned how bail was secured for Ranjan Daimary – despite a National Investigation Agency (NIA) case against him – to allow him to attend the signing of the peace accord. Daimary is the mastermind behind the October 30, 2008, serial blasts that killed around 100 people in multiple districts of Assam including Guwahati.

He also hinted that there could be a possible legal course of action against the new peace accord and in the next coming days a long march will be planned from Srirampur in Kokrajhar district to capital Dispur in Guwahati city, protesting the signing of the accord.

“As per the information which I have with me, some of the militant leaders from the NDFB wanted to come out from the shadows and join the peace talks almost two years ago. Why was there a delay? Why was there such a hurry in granting bail to Daimary from an NIA case and who is responsible for the dreaded bomb blasts that killed hundreds? What kind of democracy are we teaching to the new generation? This is a political conspiracy,” said Saraniya.

The non-Bodo groups have been kept out of the accord and a possible attempt is being made to form a parallel state or a union territory. It is okay to give reservations to the Bodo people but that shouldn’t be at the cost of the other non-Bodo communities who form a majority as compared to the Bodos. We may chart a way to take legal course against the accord,” he added.

Speaking to The Wire on whether the new peace accord will usher in a new dawn of peace in Assam’s BTAD and on the prospect of justice for the victims of the Bodo insurgency violence, Saraniya said, “Certainly we feel that the new accord may end violence and there will be less violence. The victims should speak to the government and also approach the court in getting justice.”

“The victims and the communities who have faced hardships on account of the insurgency should never give up the fight for getting justice. Some of the Bodo militants bombed court premises, marketplaces, issued threats and evicted many people. We are not against tribal people but at the same time, the critical issues of non-tribal people should also be addressed. We need to have a progressive ideology.”

The two-time MP stated that the day should be marked as a sad day as not calling other non-Bodo groups for the accord was not ‘democratic’. He likened the signing ceremony to the firing of a gun from the shoulders of the surrendered Bodo militants who were called for the occasion.

Saraniya also said the new Bodo accord will provide an opportunity to see how rights may be snatched away from various non-Bodo ethnic groups dwelling in and around the areas governed by the Bodoland Territorial Council (BTC).

He further added that the hurry with which the accord was carried forward reflected the ‘impending’ fears surrounding BTC chief administrator Hagrama Mahilary, who also heads the Bodoland Peoples Front (BPF), a close ally of the Bharatiya Janata Party (BJP) led state government, ahead of the forthcoming BTC elections.

He felt both Hagrama and the BJP will be both defeated in the coming BTC polls and the 2021 assembly elections due to dissatisfaction of the people and the opposition against the Citizenship (Amendment) Act (CAA).

Also read: The Unfulfilled Dream of Bodoland is Still a Potent Factor in the Politics of Assam

“Today is certainly a sad day but at the same time, we are hopeful that the new Bodo accord will allow us to review to what extent rights may be given or snatched away from the non-Bodo communities. It has already been stated that there are some apprehensions among non-Bodo communities surrounding the accord. But it is to be noted that when a crisis needs to be solved the system must be blamed and so must politicians, for creating other impending crises. But we feel that there should be a change in politics, and we will fight until we reach that end. This is not just the fight for BTC but for the whole of Assam. We have to ensure that neither BTC is endangered nor Assam,” said he.

The MP who won the Kokrajhar constituency twice also cautioned that the stature of Assam language as an official language of the state shouldn’t be lowered just because of the new accord.

He also expressed fear that the current voters’ list of the people in and around the Bodoland Territorial Area Districts (BTAD) may be altered.

Gaurav Das is a Guwahati-based journalist.