Both the Congress and BJP have not been talking about the lynchings that happened in Alwar under Vasundhara Raje’s regime.

A group of attendees having a refreshment with a Modi cut-out after his Alwar rally.

Alwar (Rajasthan): Commencing his campaign for the 2018 assembly polls in Rajasthan, Prime Minister Narendra Modi held a rally on Sunday in Alwar – a Muslim-dominated district which has made headlines for the numerous instances of mob lynchings by cow vigilantes under the Vasundhara Raje government.

In the 2013 state assembly polls too, Modi had begun his campaign from Alwar, targeting the then Ashok Gehlot government over cases related to communal violence. However this time, he kept mum over the lynchings and focused on his caste being insulted by the Congress leaders, with a few Kabir dohas on equality thrown in for good measure.

Out of the 11 seats in Alwar, Muslim voters can influence the results in six. Alwar also shares its boundary with Bharatpur, which has a sizeable Muslim population. 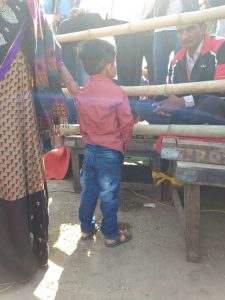 A child urinating in the open at the rally due to a lack of public conveniences.

Ahead of by-polls in Rajasthan, a ruling BJP MLA from Alwar had made remarks against the Muslim community in January this year. He said, “Muslims are giving [birth] to 12-14 children while Hindus restrict the number to one or two. The way the Muslim population is increasing, the Hindus [are] in danger. It is a well-planned conspiracy to have a Muslim in the chair of president, prime minister and chief ministers.”

This substantially damaged BJP’s prospects of winning the polls and consequently, paved the way for Congress to win the Lok Sabha seat in Alwar. An Auxiliary Nursing Midwife (ANM) who is posted in a Muslim village in Alwar told The Wire, “Muslims are totally against Modi here. If we try to introduce a little thing like a new vaccine, they sternly deny it saying, ‘Modi must be using this to sterilise us’.”

Speaking to The Wire about the mysterious silence of political parties over the lynchings, Maulana Hanif, chief imam of Alwar, said, “It’s unfortunate that the country’s prime minister came to Alwar and didn’t speak a word on the atrocities against the Muslim community, but it’s even more saddening that Congress is also not raising any voice for us”.

As expected, Modi played the caste card in his address, projecting it as a provocation of the remarks made by Congress leader C.P. Joshi on his caste. He said, “When the party has no issue, they bring up Modi’s caste. Tell me, will you vote on the basis of Modi’s caste? Will that decide the future of Rajasthan?”

“We know it very well on whose insistence, all this is happening. Could anyone speak up until there are instructions from the party leader [Rahul Gandhi]? They abuse my mother and make indecent comments about my caste. In Gujarat too, they attacked my caste and then suspended the leaders who made the remarks – but after three months, brought them back.”

The prime minister also brought up the Vishwa Hindu Parishad meet that was happening simultaneously in Ayodhya on Sunday, and targeted Congress for “obstructing” the hearing of the Ayodhya case.

“If a Supreme Court judge doesn’t prepare the time-table [for hearing cases] as per their [Congress’s] political intentions and wants to hear all to deliver justice on a serious and sensitive issue, such as Ayodhya, then the party’s lawyers, who are Rajya Sabha members, start the game of scaring the judges in the name of impeachment.”

From dozens of impressive entrance gates to a trivial single entrance, from extravagant tents to no tent, from a high-quality red carpet to a torn green carpet – the difference between Modi’s 2013 rally and the one now was clearly visible.

However, the security check was beefed up to an extent that even cameras and laptops brought by media personnel were scanned through an X-ray machine. Despite the lack of drinking water inside the rally venue, the crowd was asked to leave their bottles outside, only to be stolen later. Even children were not allowed to leave during the rally to go to the bathroom, forcing them to urinate openly within the sitting area.

In all the BJP rallies held in Rajasthan during Raje’s tenure, scheme beneficiaries and students have been made to attend via official orders. In the absence of such orders this time, the numbers showed a sharp decline. This was also evident from the easy passage vehicles had on the roads even after the rally was over.

Ashok, a resident of Alwar, said, “The crowd in Modi’s rally in Alwar this time is not even half [of what] it was in 2013. Last time, we were not able to get in due to the massive gathering but today, we got in comfortably. Clearly, the Modi wave has gone now.”

Those who turned up were essentially interested in listening to Modi’s speech, however, they were left unimpressed and even walked off in the middle as their issues remained unaddressed amidst the caste focus. 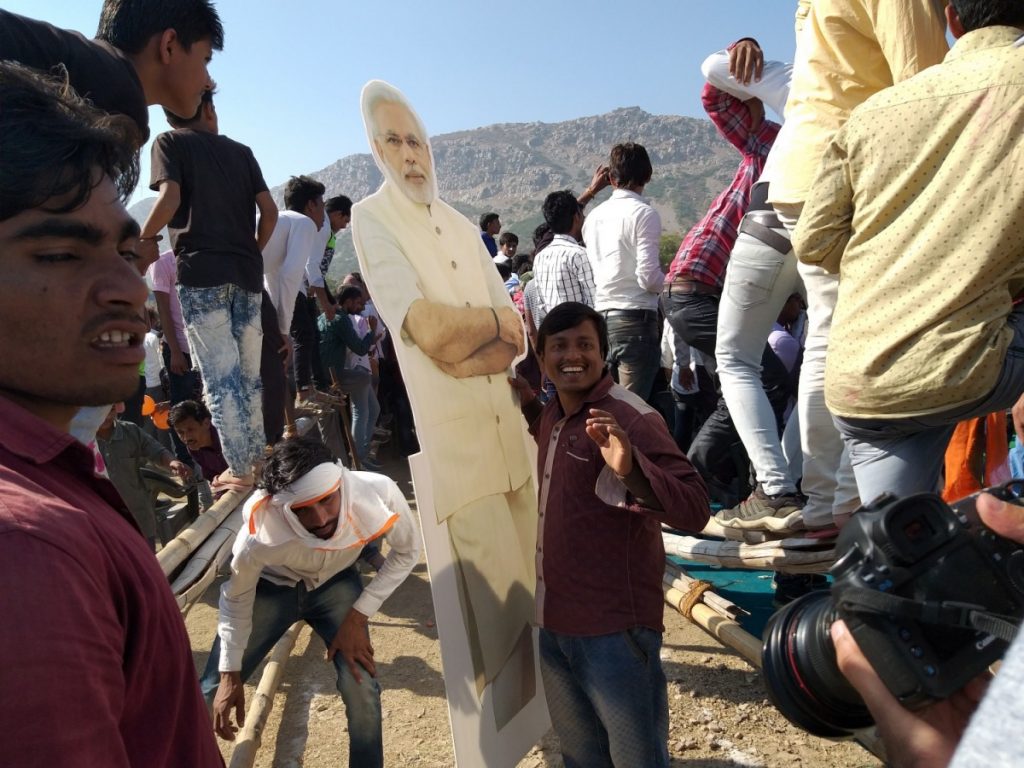 An attendee posing with Modi’s cut-out.

When Modi was boasting about his Ujjwala scheme that provides LPG connections to women from below poverty line households, a group of ladies in the crowd expressed their resentment over the excessive price of the LPG cylinders.

Varashi from Mundawar said, “What’s the use of the scheme if the cylinders still cost Rs 950? If poor people don’t have Rs 1,000 then how are they supposed to avail them?”

Cut-outs for the poor

For the poor and the unemployed, Modi cut-outs were the only take-away from the rally – which was also a primary reason for their attendance.

“If a rally happens in our city, we usually go as we don’t have any job or business to take care of. We will take this cut-out home and put it outside, maybe that will help bring some development,” said a woman holding a Modi cut-out.

All photographs by Shruti Jain.