FIRs vs Free Speech, the Signature Tune of Indian Fascism

If Indians who cherish their democracy, their country’s unparalleled diversity of thought and culture, do not recognise the threat to India as a nation that the so-called Hindu rashtravadis pose, then their future will be bleak.

The Uttar Pradesh, Madhya Pradesh, Haryana and Delhi police’s decision to slap no fewer than ten charges, ranging from criminal conspiracy to sedition, against sitting MP Shashi Tharoor, the respected journalist and editor of National Herald, Mrinal Pande; Rajdeep Sardesai of India Today TV; Zafar Agha, editor of Qaumi Awaaz; and three other journalists of Caravan magazine, paints a stark picture of the desperation that has seized the Bharatiya Janata Party and its parent body, the Rashtriya Swayamsevak Sangh, as it begins to see the power that it had seized in 2014 and consolidated in 2019, slipping out its grasp.

The method it has chosen to revive its fortunes is one with which we have grown wearily familiar with in the past seven years: use the enormous suo moto powers of arrest and incarceration that the Indian constitution, and previous governments, have given to the police to act against her or  whomsoever their masters desire, spit upon the right of habeas corpus, and imprison and terrorise her or him for an indefinite period of time to break their spirit.

In the past seven years, as the Narendra Modi government has bumbled from one economic blunder to the next, it has come to rely more and more on stoking communal animosity, stifling dissent through the misuse of police powers, buying or blackmailing opposition members into joining the BJP, and using TV and other media to build a larger-than-life image of the prime minister.

The BJP’s reliance on these tactics to discredit some of the most respected members of civil society in India goes back to the early days of Modi’s first term in office and reached a height during and after the Shaheen Bagh movement. The fact that they have used these tactics yet again so soon after the Northeast Delhi pogrom shows that a quiet desperation has begun to sink into the government and the Sangh parivar. 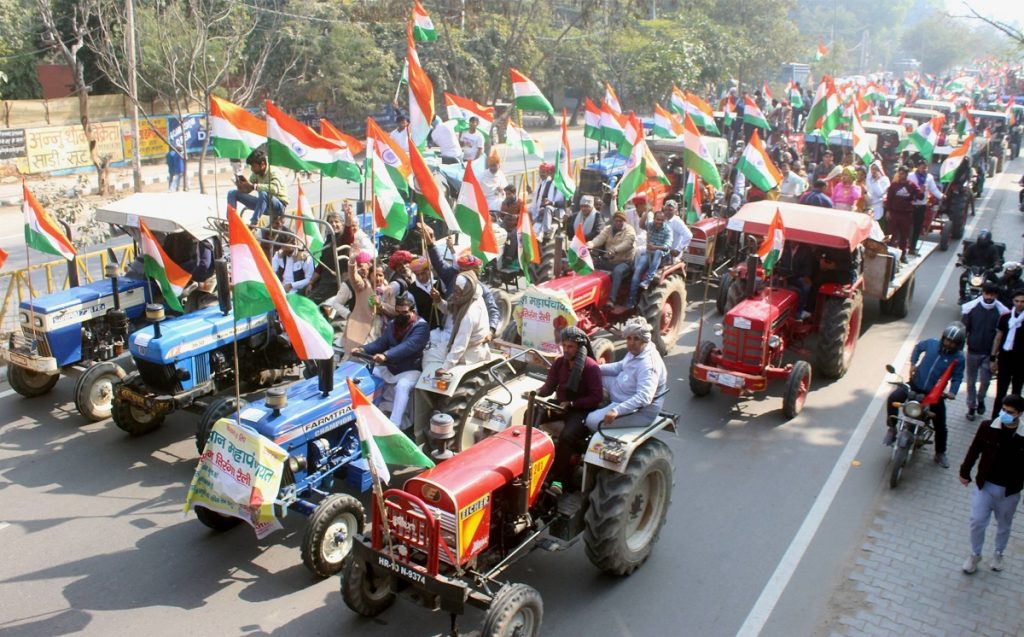 Farmers participate in a tractor march on Republic Day, as part of their protest against the Centre’s farm laws, in Gurugram, January 26, 2021. Photo: PTI

The FIRs filed against Tharoor and the others are absurd. But it is their absurdity that gives away the real, far more sinister, intention of the Modi government. This is to arouse once again the envy and hatred of ‘Lutyens Delhi’ in the lumpen proletariat of northern India, to fan hyper-nationalist paranoia with veiled references to the farmers as Sikhs and Khalistanis, and thus to re-create the hyper-nationalism that enabled it to break the Shaheen Bagh movement a year ago.

All this is apparent from the wording of the FIR lodged in Noida. According to it:

“The accused in a well-planned manner conspired with each other to spread the wrong information about the death of a farmer in police firing. It was intentionally done to incite riots at large scale and create tension among communities …because of their tweets protestors reached Red Fort and installed their religious and other flags where the national was hoisted”. [Emphasis added]

Compare this to what Sardesai and Tharoor actually tweeted: What Rajdeep Sardesai reported about a protester dying of a gunshot was an allegation. No amount of twisting can turn the report of a statement or general perception into its endorsement. This can be inferred only if the reporter allows his or her report to remain unchanged after it has been proved to be false. And the record shows that Sardesai was explicit – on Twitter and on air – in subsequently noting that the young man’s death was due to an accident with his tractor. Shashi Tharoor’s tweets were of the same kind.

Finally, the charge that these seven persons (and another unknown person) instigated the “protestors (who) reached Red Fort and installed their religious and other flags where the national flag (sic) was hoisted” is beyond absurd for, as the photograph below shows, if there was ever a Modi bhakt in Punjab, it was Deep Sidhu, a failed actor who has been photographed supping with home minister Amit Shah, and smiling into the camera with Narendra Modi. It was a group led by Sidhu which climbed the flagpole atop the Red Fort and hoisted a Nishan sahib pennant (not a Khalistan flag) upon it.

Was Deep Sidhu and his followers responsible for hoisting that flag at the Red Fort?

He is the same person who campaigned for BJP in Lok Sabha Elections. Last time also he caused trouble in the protest by giving alleged Pro-Khalistani statements. pic.twitter.com/vIR0N86kTf

A conspiracy hatched after the event

The FIR accuses the seven of a conspiracy but itself concedes that there cannot be a conspiracy without prior planning. Prior planning requires foreknowledge of an event at the very least, if not its instigation. So how could any one of them have known in advance that a farmer trying to break a barrier would overturn his tractor upon himself?

The possibility that a Mrinal Pande, a Zafar Agha, or Caravan editor Vinod Jose (who wrote the most perceptive, and balanced, mini-biography of Modi to have appeared in print, in 2012) would stoop to a conspiracy of any kind is, simply, ludicrous. But it should not be dismissed lightly. First, the Delhi, UP and Haryana police have not stopped at ‘conspiracy’ but also accused them of ‘sedition’.

It must know that the second charge will fail automatically when the absurdity of the first is exposed. But the charge of sedition can prevent the immediate dismissal of the FIR, for sedition is a grave offence.  Along with the Unlawful Activities (Prevention) Act – which is dealt with by the National Intelligence Agency, Modi’s preferred instrument for sowing terror into those who disagree with his policies – sedition has become the new route to ensuring lengthy pre-trial incarceration.

This is how the Modi government has been keeping civil rights activists accused of being Maoists in the Elgar Parishad case in jail without trial for more than two years.

Also read: As Support for Farmers’ Agitation Swells, Is the State Crackdown Backfiring?

Whether the Modi government will actually pursue this absurd case of conspiracy and sedition against the seven latest targets remains to be seen, but the fear that its ruthless disregard for the constitution and human rights has shown so far will burrow deeper into the populace in the coming months till, quite possibly, by the time the next elections come there will be only the ragged remnants of civil society left to oppose him in the public sphere.

If Indians who cherish their democracy, their country’s religious syncretism, and its unparalleled diversity of thought and culture, do not recognise the threat to India’s existence as a nation that the so-called Hindu rashtravadis in reality pose, then their future will be bleak.

In seven years, more out of ignorance than ill will, the Modi government’s policies have stalled industrialisation, allowed scores of half-completed infrastructure projects to turn into mouldering ruins, bankrupted an entire post-liberalisation generation of entrepreneurs, brought economic growth down to less than two-thirds of what it had been during the Vajpayee and Manmohan Singh years, and brought employment growth close to zero. 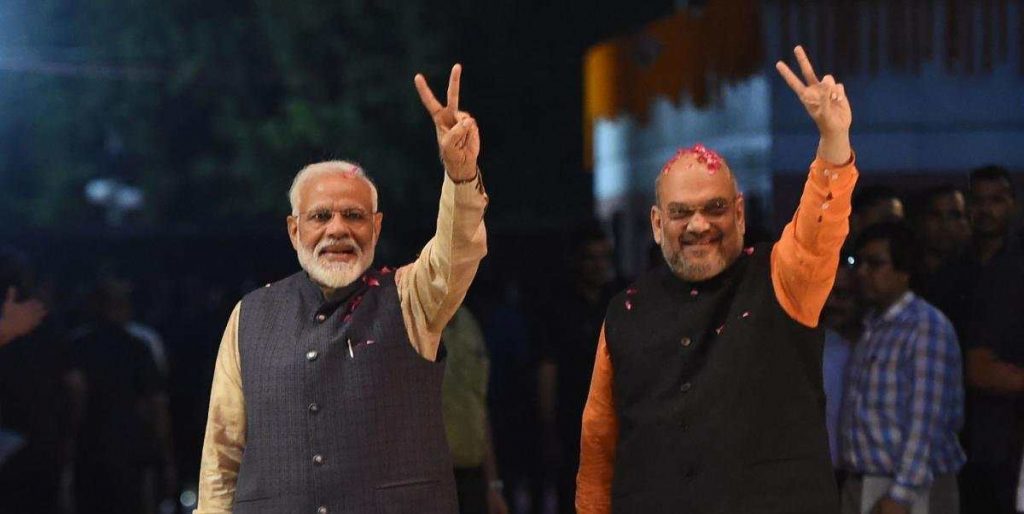 Not content with this, Modi has alienated every neighbouring country in South Asia, and allowed the country to float to the brink of a war with China. But worst of all, he has allowed the minions of the RSS and various branches of the Sangh parivar to polarise the country along Hindu-Muslim lines, and has now begun working on the Sikhs.

At the age of 82, being among the last few who physically remember the euphoria of independence, I think I have a better claim to being able to see where this government is dragging our country. Only an opposition that sets aside its petty bickering and opportunism, and unites across the north, the south and the east, and respects their diverse needs and cultures, can save the India upon whose survival and economic growth their common future depends.