Will Farmers' Movements Be the Glue For an Alliance of Regional Opposition Parties?

As farmers' protests capture people's imaginations and primetime slots, a range of regional parties are flocking to support them. 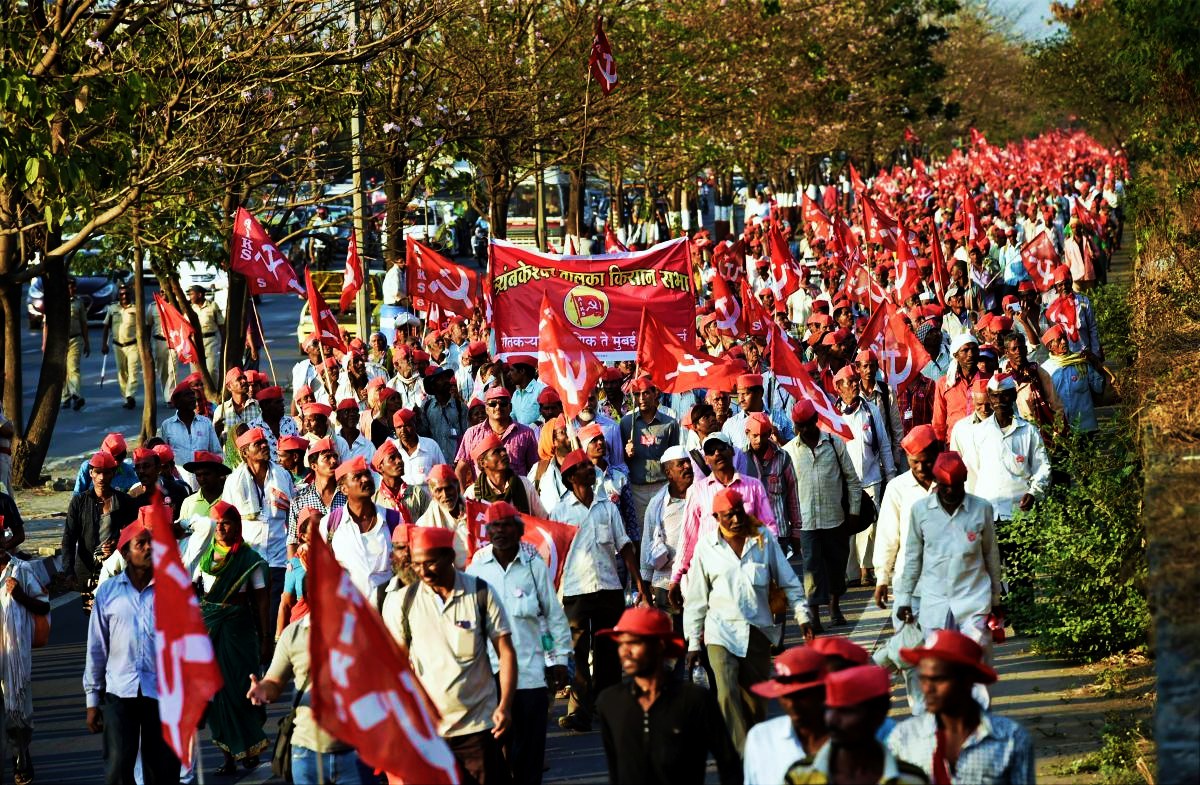 New Delhi: With the ‘Kisan long march to Mumbai’ capturing headlines – and the imagination of the middle-classes, who usually remain apathetic, at best, to farmers’ movements – rural distress is being projected as one of the major issues that the 2019 Lok Sabha elections could be contested on.

Politicians pick up variances in the moods of the public quicker than anyone else, and several prospective regional third-front parties, struggling for ideas and for issues of national relevance, are starting to galvanise around the issue of rural distress to attack the Bharatiya Janata Party (BJP) government at the Centre.

Rural distress is not a new phenomenon and farmers’ organisations across the country have been agitating on the streets for several years without being heard – and without a helping hand from political parties. But that appears to be changing now, as rural distress finds itself worthy of primetime space on the elusive mainstream television channels. Political parties of varying ideologies and from across the country are increasingly finding themselves supportive – vocally and visibly – of rural agitations.

Wednesday (March 21) saw one such coming together of leaders of non-Congress, non-BJP parties in support of the Medha Patkar-led Bhumi Adhikar Andolan, a coalition of several farmers’ organisations. The venue was the Constitution Club of India in Delhi and the event was a national convention on the “agrarian crisis, assault on cattle economy and lynching of Dalits and minorities”. Prominent leaders of several regional parties including Janata Dal (United) (JDU), Dravida Munnetra Kazhagam (DMK), Trinamool Congress (TMC), Communist Party of India (Marxist) (CPIM), and the Communist Party of India (CPI) pledged their active support to the cause and even spoke of the possibility of collaborative efforts.

Rebel JDU leader Sharad Yadav, who has declared that he is “on a mission to unite political parties against the BJP” and who met Akhilesh Yadav in Lucknow on Tuesday for the very same purpose, was also present at the convention. He tore into the BJP for having failed to fulfil its election promises. “They promised that farmers will be given 1.5 times their cost of production. Nothing has happened. Farmers are the backbone of our economy. This government has not even tried to fulfil its promises,” Yadav said, with the other leaders on the dais listening intently.

Then, the veteran politician went on to underscore the significance of middle-class support in Mumbai for the Kisan march. “Nasik se jo kisan chala. Puri Mumbai ka aisa koi tabka nahi tha jisne use samarthan nahi diya. Kayi saal baad ek laal rally ko middle class ne salaami di (Farmers walked from Nasik. There was not a section of the society in Mumbai that did not support the farmers. After many years, a red rally has been supported by the middle-classes),” Yadav said, looking at the CPI(M) general secretary Sitaram Yechury, seated on the dais, who nodded and smiled.

Also present at the convention was Rajya Sabha MP from the DMK T.K.S. Elangovan, who attacked the BJP for its ‘anti-farmer’ policies and ‘failure’ to reign in gau raksha units. “Mob lynchings based on religious feelings of the majority community have increased under the current government. Although the government is not doing it directly, there seems to support. It shows. There are laws in place. But they are not being implemented,” he said.

In a subtle reference to the BJP-RSS’s Hindu nationalism, Elangovan said, “Politics should stay away from religion because politics is for all people. If it is narrowed to a specific religion, then it is not for all people.” He also went to add a political message, “The DMK has never supported religious majoritarianism and we will continue to reject it.”

Until now, the DMK, which could be a crucial player in the post-poll arithmetic, has given mixed signals on a possible alliance with the BJP in Tamil Nadu and has preferred to keep its options open and its cards close to its chest. 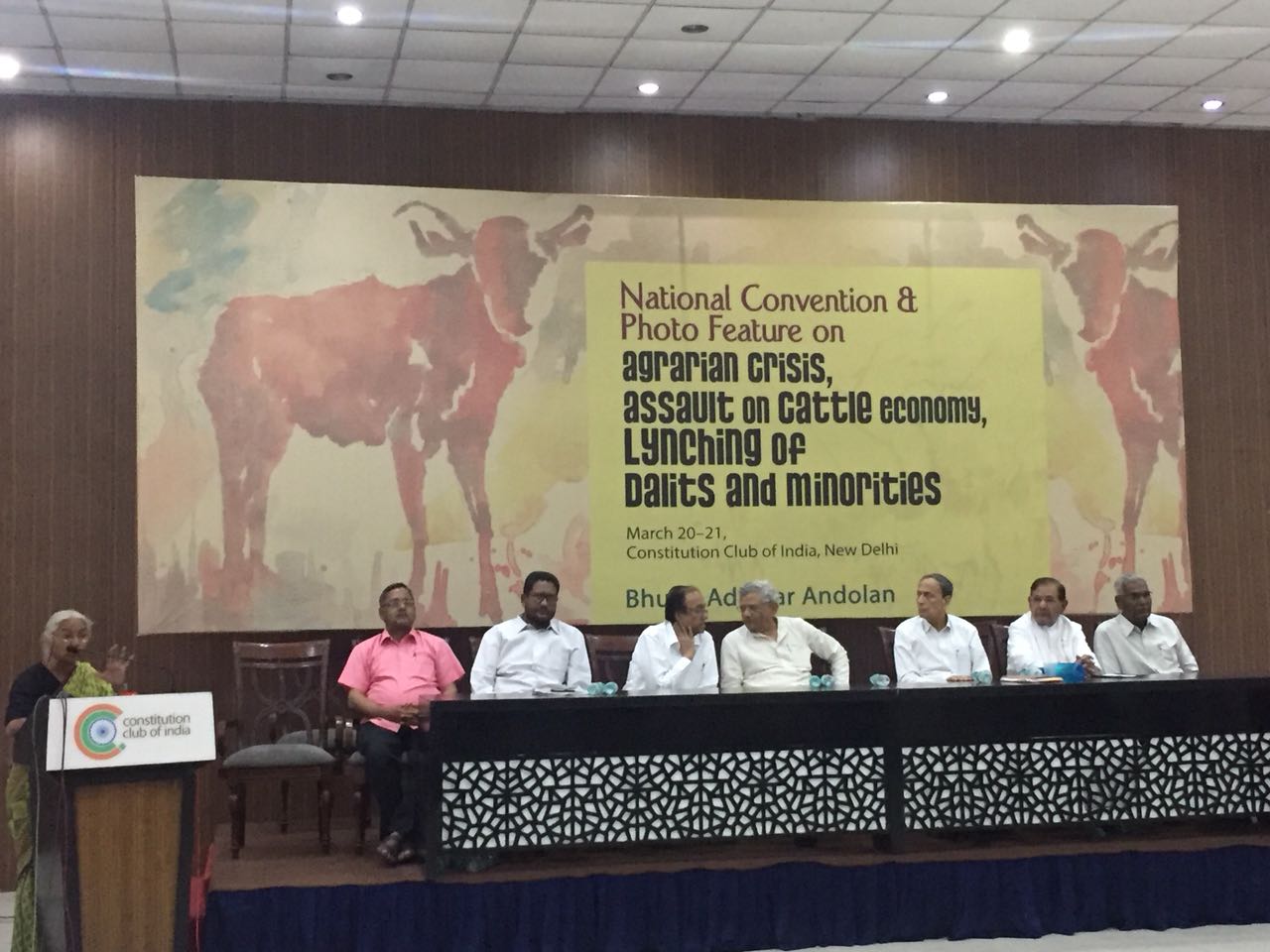 Mamata Banerjee, who was among the first to float the idea of a third front and remains the most vocal proponent of it, had also sent her representative in the form of Rajya Sabha MP Dola Sen. Sen reminded leaders present of the TMC-led Nandigram and Singur agitations, with which began the decline of the Left in West Bengal. “At a time like this, it is important to remember the lessons from the Nandigram and Singur agitations. The TMC has always stood steadfastly in support of peasant movements, and has welcomed the co-operation of other political parties,” she said.

Sen also went on to condemn the BJP for its ‘divisive politics’. “The cattle economy has been impacted because of the violence of the gau rakshaks. We condemn all atrocities based on religion. It is time for all political parties to come together on one platform,” she said.

With senior leaders of the Left parties in attendance a TMC leader was asking for multi-party unity – a prospect which most would have categorised as unthinkable, given the TMC’s long and bitter rivalry with the Left in West Bengal.

Acting as the glue in this instance was Patkar, a veteran leader of social movements and leader of the Bhumi Adhikar Andolan. She spoke of the need for a multi-layered social coalition to rise against the present dispensation. “We should not stay quiet in times of atrocities. We want a massive secular and socialist opposition to rise at all levels,” Patkar said. She also had an appeal to make to political representatives. “We appeal to all parties to raise these issues in parliament and also to extend their support to the people’s movement.”

Yechury assured Patkar of his party’s support to the movement outside and inside parliament. “The CPI(M) has been and will continue to raise these issues in parliament. There needs to be a law to protect farmers. We need to push for a law that makes it legally binding on the government that farmers get whatever minimum support price (MSP) is announced,” Yechury said.

Yechury went on to launch an attack on the BJP-RSS, calling them ‘fascist forces’. “They don’t allow parliament to function. The finance Bill was passed in parliament without any discussion. This is nothing but fascism,” he said.

“All this religious polarisation is part of a larger conspiracy to alter our constitution. The Muslim League and RSS are two sides of the same coin,” Yechury added.

The All India Kisan Sabha, which organised the Mumbai march, is an affiliate of the CPI(M). After the resounding defeat in Tripura to the BJP, the CPI(M) – which is now fighting a battle for survival – is looking to build on the popularity of the mass agitation.

The CPI(M) general secretary emphasised the need to strengthen mass movements – farmers’ movements in particular – and the need for a larger political alliance. “Mass movements of this kind need to be strengthened and supported. We need a large alliance consisting of political parties and various social movements. Independent India was not possible if the peasants did not participate. This time too, the peasant movements will be crucial,” Yechury said.

While the CPI(M)’s stance about national political alliances has been ambiguous, the party’s draft political resolution highlights the need for a larger alliance of ‘all left and democratic forces’ and for electoral unity against the BJP. “Appropriate electoral tactics to maximize the pooling of the anti-BJP votes should be adopted based on the political line of the party,” the resolution stated.

While all political parties are making noises about rural distress and efforts to be seen as supporting farmers’ agitations, whether rural distress is an issue that the 2019 Lok Sabha elections will be contested on remains to be seen. With several farmers’ agitations planned by various organisations across the country in the coming months, the presence of regional political parties and the extent and intensity of their support would be indicative of the political significance of rural distress and whether we will see a return of farm politics.