Many leaders claimed that the move was not prompted by a change of heart but to further the political interests of the BJP in upcoming assembly elections. 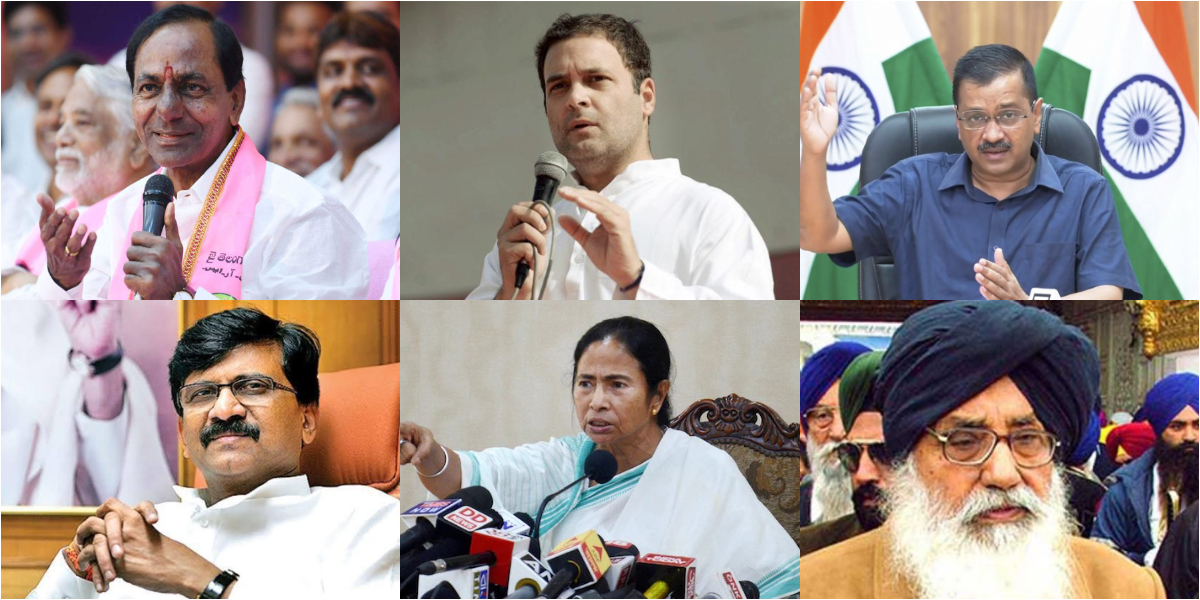 New Delhi: Prime Minister Narendra Modi’s announcement on Friday, November 19, that all the three farm laws would be withdrawn has been welcomed by most opposition political parties. However, their leaders said that the BJP-led Union government only bowed to the demands of the farmers, who have been protesting against the laws for more than a year, due to the impending elections in five states, including Uttar Pradesh and Punjab. They also lamented that the decision came after “more than 700 farmers died” during the protests.

The announcement on Prakash Divas, the birth anniversary of Guru Nanak, also assumes significance since a large number of Sikh farmers from Punjab, Haryana and Uttar Pradesh were actively involved in the protests.

Reacting to the announcement Congress leader Rahul Gandhi tweeted that the “arrogance of the government” finally had to bow to the Satyagraha or struggle of the farmers. The Congress is the ruling party in Punjab, where the earliest protests against the laws began with the blockade of trains last year.

Other Congress leaders hoped that the Union government would learn its lessons from the entire episode. Deputy leader of the Congress in the Rajya Sabha Anand Sharma, while welcoming the repeal of the farm laws, hoped the government would not bypass parliament and would meaningfully engage with the opposition before enacting laws with far-reaching consequences.

“Truth and justice [have] prevailed and the farmers’ protests vindicated. Had the government not bypassed parliament scrutiny and excluded stakeholders from consultations, the pain and suffering of the farmers and the loss of lives could have been avoided,” he said.

“Hope that lessons are learnt and the government gets the realisation that no law should be enacted in a hurry without consultation with all stakeholders,” Sharma said.

Former Union minister and senior Congress leader P. Chidambaram said, “What cannot be achieved by democratic protests can be achieved by the fear of impending elections.”

He charged that the prime minister’s announcement on the withdrawal of the three farm laws is not inspired by a change of policy or a change of heart. “It is impelled by fear of elections,” he tweeted.

“Anyway, it is a great victory for the farmers and for the Congress party which was unwavering in its opposition to the farm laws,” Chidambaram also said.

Aam Aadmi Party (AAP) leader and Delhi chief minister Arvind Kejriwal said he was happy to hear some good news on Prakash Divas. However, he added that over 700 farmers died over the past year and said generations would remember how the farmers put their lives at risk to protect their interests. In the 2017 Punjab election, AAP secured the second highest number of seats and is hoping to perform even better this time.

Former Punjab chief minister Amarinder Singh, who recently floated the Punjab Lok Congress party after leaving the Congress, thanked the prime minister for acceding to the demand of every Punjabi and repealing the three black laws.

Great news! Thankful to PM @narendramodi ji for acceding to the demands of every punjabi & repealing the 3 black laws on the pious occasion of #GuruNanakJayanti. I am sure the central govt will continue to work in tandem for the development of Kisani! #NoFarmers_NoFood @AmitShah

West Bengal chief minister Mamata Banerjee on Friday congratulated farmers for their relentless fight against three farm laws and said they were not fazed by the “cruelty” of the BJP.

“My heartfelt congratulations to every single farmer who fought relentlessly and were not fazed by the cruelty with which @BJP4India treated you. This is YOUR VICTORY! My deepest condolences to everyone who lost their loved ones in this fight. #FarmLaws,” Banerjee tweeted.

Shiromani Akali Dal (SAD) supremo Parkash Singh Badal said no government should enact such “insensitive and cruel laws” again. “A defining moment in history and a historic victory of farmers on Gurupurab,” Badal said in a statement.

Badal said, “It was for the first time in the history of democratic governments that brazen and cruel laws were made without even taking the stakeholders on board. No govt should ever do such an insensitive and cruel thing again.”

He also lamented the death of several farmers during the protest, saying, “The loss of these brave soldiers and the disgraceful and entirely avoidable events like the one at Lakhimpur will always remain a dark blot on the face of this government.” Eight people, including four farmers, were killed in the violence in Uttar Pradesh’s Lakhimpur on October 3 after a car that was part of a VVIP convoy mowed down a group of protesting farmers.

Former BJP leader Yashwant Sinha congratulated the farmers, adding that he will not attach any “noble sentiment” to the government’s move. It is a calculated step before the Uttar Pradesh elections, Sinha said, adding that for this government, “democracy begins and ends with elections”.

While I congratulate the Kisans on their victory over the govt for the repeal of the farm laws, I attach no noble sentiment to the govt for this move. It is a calculated step for the UP elections. For this govt democracy begins and ends with elections.

CPI (Marxist) general secretary Sitaram Yechury saluted the farmers for their “brave struggle”, crediting them with forcing the Modi government to repeal the three farm laws. “We must not forget the sacrifice of more than 750 farmers who have lost their lives in this struggle. They are our martyrs. The quest for justice for those targeted by the government and its agencies through false cases will continue,” he said.

Yechury also demanded that the prime minister apologise “for the hardship and trouble caused by his dictatorial step of farm laws to benefit his crony business partners”. He criticised Modi for expressING no remorse over the deaths of farmers and for continuing to justify the laws. “[He] refuses to learn from this historic, spirited, inspiring and brave struggle,” Yechury said.

He said while repealing the farm laws, parliament must enact legal entitlement to sell at the minimum support price (MSP).

The Shiv Sena and the NCP, which share power in Maharashtra, said the government had to finally bow down to the agitating farmers. Shiv Sena leader Sanjay Raut said, “For the first time the mann ki baat of people has come out PM Modi’s mouth. BJP leaders were openly calling these farmers Khalistanis and Pakistanis, but the Union government had to bend before the farmers’ pressure.”

“More than 400 farmers lost their lives during the protests on the borders of Delhi. Had Modi listened to our demands, many lives would have been saved. But the government was adamant and refused to listen to the farmers’ issues,” the Sena MP added.

Nawab Malik, chief spokesperson of the NCP, said in a tweet, “Jhukati hai duniya, jhukane wala chahiye. We salute all the farmers, many of them gave their [lives during the protest]. The three farm laws have been withdrawn.”

The victory of farmers is the victory of the country, said Rashtriya Lok Dal chief Jayant Chaudhary in a tweet in Hindi.

“The power of people is always greater than the people in power,” said Telangana minister K.T. Rama Rao, reacting to Modi’s statement on repealing the three farm laws.

“Proved once again by the Indian farmers who got what they demanded by their relentless agitation. Jai Kisan Jai Jawan,” KTR, the Telangana Rashtra Samithi (TRS) working president, tweeted.

His father and Telangana chief minister K. Chandrashekhar Rao holding protests asserted that TRS would fight till the end over the NDA government’s “anti-people policies and anti-farm laws.”

Anyone who believes the government repealed the #FarmLaws out of the goodness of its heart is completely mistaken. This government only responds to cold hard numbers – bypoll setback = fuel price reduction. Poor internal polls numbers for Western UP & Punjab = #Farmlawsrepealed

Meanwhile, some farmer leaders have also lamented that the Union government delayed the decision to repeal the farm laws, which led to many farmers losing their lives unnecessarily.

Farmer leader Avik Saha was quoted as saying: “Very late at the cost of 700+ farmers. A very sorry thing for us to note that government still doesn’t concede that this was an anti-farmer, pro-corporate legislation; maybe this is a temporary truce.”