The farm Bills were passed by a voice vote despite opposition MPs asking for a division vote - which the NDA clearly was not in a position to win. 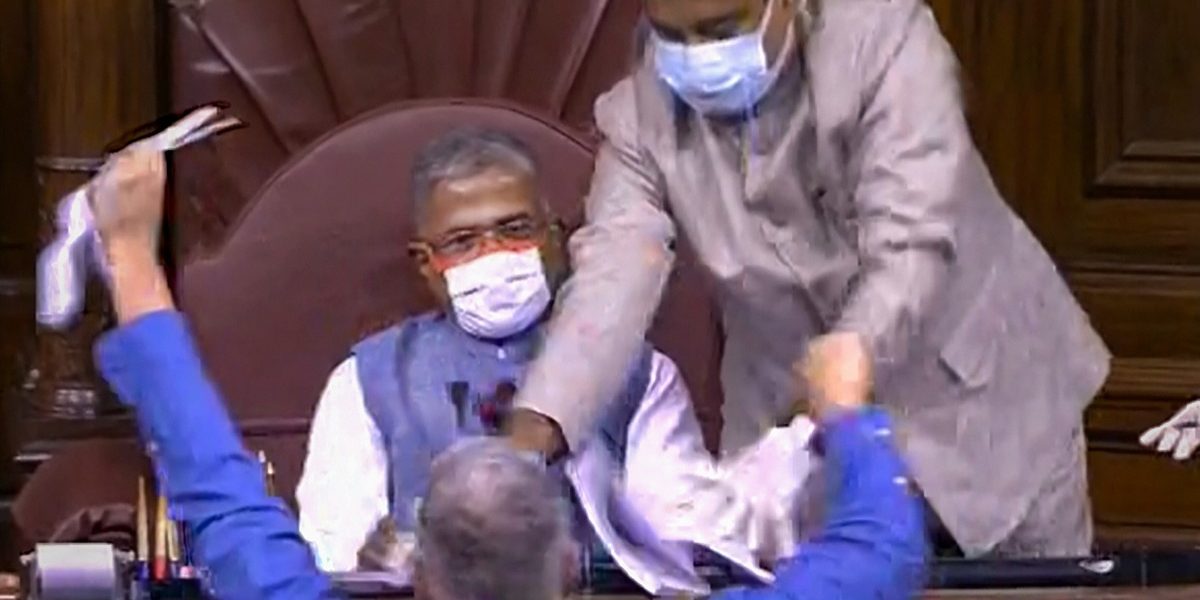 The country is passing through a deepening COVID-19 crisis caused by failure of the Union government to deal with it through robust public policy measures. This crisis has been preceded by a more lingering crisis manifested in the NDA regime’s calculated denial of scrutiny of legislative proposals in parliament. This process has steadily gained in intensity over the last six years by employing crude majority strength in the Lok Sabha.

On Sunday, things hit a new low when the Bills were passed by a voice vote despite opposition MPs asking for a division, i.e. a recorded vote – which the National Democratic Alliance (NDA) clearly was not in a position to win.

Opposition leaders stage a protest in the Rajya Sabha over suspension of eight MPs over farm Bills, September 21, 2020. Photo: RSTV screengrab via PTI

The stubborn stand taken by the regime in the Rajya Sabha on September 20 against the demand of opposition parties, including the Biju Janata Dal, to refer the farm Bills – The Farmers’ Produce Trade and Commerce (Promotion and Facilitation) Bill, 2020 and the Farmers’ (Empowerment and Protection) Agreement of Price Assurance and Farm Services Bill, 2020 – to a select committee of the House for better scrutiny and examination, is reflective of its unwillingness to subject those Bills to deeper levels of deliberation and consultation, eschewing party perspectives.

Neither the farm Bills nor the earlier Bills – such as the Constitution Amendment Bill abrogating Jammu and Kashmir’s special status and Bills concerning Citizenship Amendment, Triple Talaq and Unlawful Activities (Prevention) Bill – were referred to any of the committees of parliament for in-depth deliberation on a non-partisan basis by taking into account inputs from a variety of stakeholders. 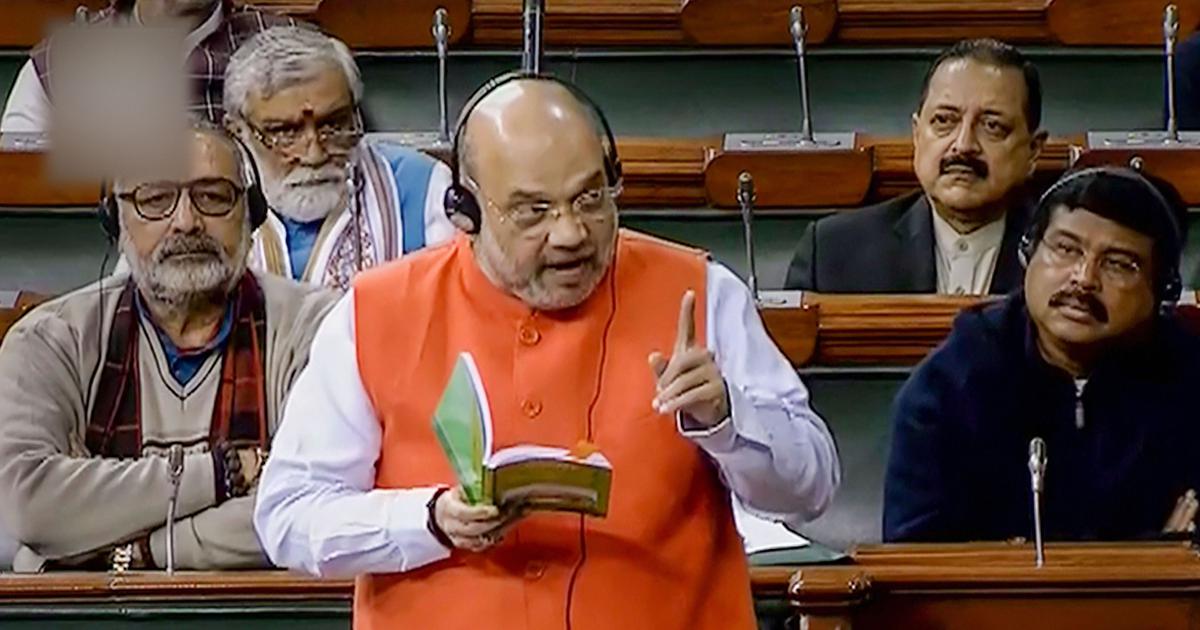 In the absence of such in-depth deliberation free from party perspectives, the Bills or legislative proposals suffer from deficit of legislative scrutiny.

The crude majority of the ruling party in the Lok Sabha and the cobbling up of numbers in the Rajya Sabha have enabled it to pass legislations without threadbare discussion and critical analysis of their provisions. As a result of serious deficiency of scrutiny, such Bills when become Acts lack sufficient reasoning and rationale for meriting wider public acceptance.

On January 16, 1948, Mahatma Gandhi had thoughtfully said, “No Cabinet worthy of being representative of a large mass of mankind can afford to take any step merely because it is likely to win the hasty applause of an unthinking public. In the midst of insanity, should not our best representatives retain sanity and bravely prevent a wreck of the ship of State under their management?”

The lack of sanity which is reflected in pushing numerous legislations in the parliament by the NDA regime from 2014 onwards by avoiding scrutiny on a bipartisan basis in parliamentary committees has become a new normal, negating the very basis of parliamentary democracy.

Sanity demands that before legislations on sensitive subjects are taken up in the parliament for discussion and passage, the ruling regime should necessarily mobilise public opinion in their favour, so that people would accept them willingly and conducive atmosphere would be created for their effective implementation. That is why it is said that better scrutiny leads to better governance.

The farm Bills were neither referred to the concerned department-related parliamentary standing committees nor were they referred to the select committee of the Rajya Sabha as suggested by the opposition parties for scrutiny and examination.

The statement of the agriculture minister – who piloted these Bills in the Rajya Sabha – that there was no need to refer these Bills to select committee of the House because these are small Bills sounds so hollow. In the absence of scrutiny and examination of Bills at the committee level, the vital ingredients involving wider deliberation and consultation are completely absent.

Therefore, the protests by farmers in many parts of India against these Bills, even before these were taken up in the parliament, clearly indicated public resentment against the government neglecting scrutiny and examination of legislations, which aim at deeply impacting their ways of disposal of their agricultural products.

It means that these Bills passed by the parliament lack support from the public because its views and opinions were never factored in while formulating them. It clearly establishes the point that lawmaking process when dictated by crude majority of the ruling regime would fail to command the willing support of people.

It is instructive that in pre-independent India there were occasions when the colonial authorities used to refer Bills to committees of legislatures for nuanced discussion and deliberation before it became the law of the land.

The most glaring instance was the Champaran Agrarian Bill of 1917 which was framed by the British authorities after Mahatma Gandhi launched his historic Champaran Satyagraha in 1917 to abolish forcible cultivation of indigo on the land of farmers at the dictation of British planters.

At the heart of that momentous Satyagraha remained the deliberation and consultation on the part of Mahatma Gandhi with farmers, British planters, colonial bureaucracy, police and ordinary people. It is instructive that Champaran Satyagraha, which began with Gandhi breaking the law, ended with the framing of law to put an end to forcible plantation of indigo.

Also read: A Blow-by-Blow Account of How the Rajya Sabha Passed the Farm Bills

And when the framing of law began and the Champaran Agrarian Bill was formulated and introduced in the Bihar-Odisha legislative assembly, many members of the assembly demanded for its reference to the select committee of the House for scrutiny and examination. The British government conceded it and even Mahatma Gandhi was requested to examine the Bill.

It is indeed tragic that hundred and three years after Champaran Satyagraha, the NDA government is sabotaging legislative scrutiny of farm Bills and using its crude majority to pass them, disregarding the principles of parliamentary oversight which is indispensable for fine tuning Bills and improving their depth and content.

Such procedural lapse is subversion of democracy. The need of the hour is to restore the culture of deliberative and consultative process of lawmaking and salvage the democratic process in parliament – the apex representative body in the constitutional scheme of governance.

S.N. Sahu is a former official of the Rajya Sabha secretariat.