For a hundred days, Delhi had a living heart – an inclusive, peaceful protest that resisted every kind of provocation. Yet there was also a risk to the Shaheen Bagh model. 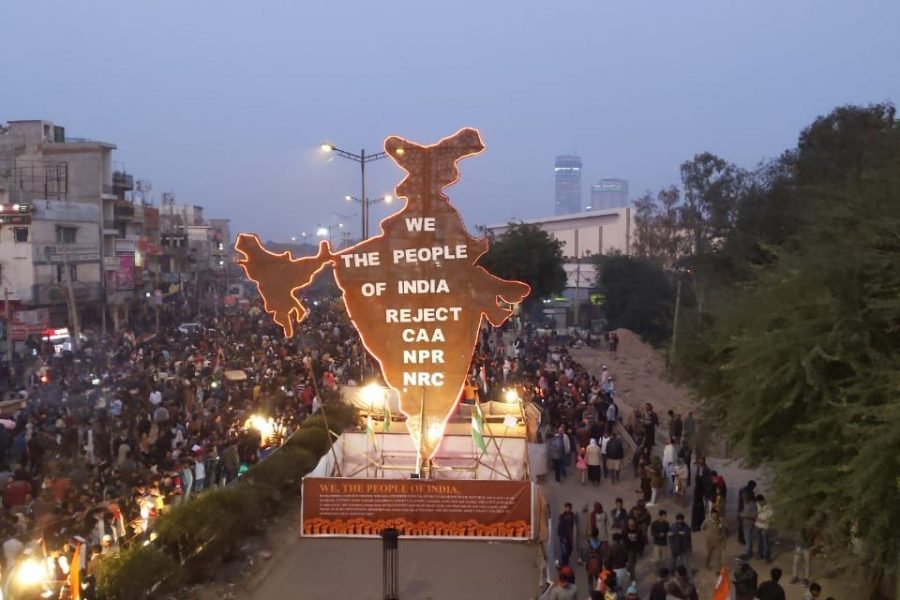 After one hundred nights and days planted and growing on the street, Shaheen Bagh was uprooted on the morning of March 24.  So were other protest sit-ins, in the National Capital Region and elsewhere.

For a hundred days, an unassuming group of women in an urban ghetto of Muslim Indians carried the banner for the constitution – and the solidarity and secularism at the heart of its charter.

They were faultless in their inclusion. The naaras sung there were in Urdu but also Malayalam. On the thirtieth anniversary of the flight of the Pandits from Kashmir, there were Kashmiri Pandits on stage at Shaheen Bagh. For a hundred days, India’s capital had a heart.

The women protesters and their mass of supporters stayed peaceful despite every level of provocation. After hosting a huge celebration of India’s Republic Day, the site became the prime target of the ruling establishment. The women were slandered on TV, bullied in campaign speeches by India’s most powerful men, and threatened with deadly violence by fringe groups and radicalised gunmen.

They never once responded with aggression. They held their ground through the horror of the riots in North-East Delhi, which began as vigilante mobs raided smaller sit-ins, the mini-Shaheen Baghs.

It took a global pandemic – which shut down Delhi itself, along with much of the world – to justify and practically enable removing them.

What Shaheen Bagh created was so rare it was almost old-fashioned – it created a moral example. Its steady moral, peaceful and uplifting atmosphere meant that even the Delhi police were reliable in protecting it from overt threats. (Although, as Mark Tully noted, “the most blatantly political police act was unnecessarily barricading roads to spread chaos for commuters, thus creating hostility to the Shaheen Bagh sit-in”.)

Everyone else became reliable too. When an extremist gang promised to attack and disperse the women on February 2, Sikh farmers rose and travelled to their barricades, to offer physical protection.

Joining them were stars and artists from Mumbai and Delhi, offering their presence as a hedge against violence (and against the factual distortion that would surely follow). For a week, the tiny stage at Shaheen Bagh received a stream of pop-stars and classical singers, actors and entertainers that would have passed for a major music festival.

Also read:Stars and Artists Line Up for Spontaneous Festival at Shaheen Bagh

Yet there was also a risk to the Shaheen Bagh model, a danger that played out with the Delhi riots.

In its first phase, starting December 15, the CAA-NRC protest movement swept up Indians regardless of class, religion, region or generation. It prominently featured college students, Dalit and minority leaders, military veterans, A-list celebrities, and Indians abroad, and drew them together in public protest in over a hundred cities. That diversity – the participation of elite classes, especially – was armour. Even within states where the BJP controlled the police, and forceful suppression expected, it was plain to see how police reaction differed between those marches and gatherings, and ones dominated by working-class Muslims.

By the middle of January, however, the political stamina of elite participants was waning. It still existed, but was retreating from streets and squares back onto social media. Students needed to be back in class, and others back at office. Instagram stars, whose role had been powerful enough to warrant a BJP video mocking them, had to balance the aandolan with the content their followers signed up for.

The anti-NRC movement had begun spontaneously, but to last and maintain its diversity, it needed more. It needed a strategy to consolidate and protect itself, along with genuinely co-ordinated tactics for each day. Pragmatic institutionalisation is what allowed India Against Corruption to grow through 2013, against much lighter odds.

The burden of defending India

Instead the burden, and the risk, of carrying forward the anti-NRC effort shifted onto Shaheen Bagh, and the scores of other protest sit-ins it had inspired.

Progressive Indians, as well as protest organisers, made a costly if unconscious decision. They pivoted from planning broad-based, periodic, but attention-seizing protest events (exemplified in the country-wide actions of December 19) to pouring resources into supporting the mini-Shaheen Baghs. Fending off one SOS after another, they spent crucial time and energy needed to rally the rest of the public.

It was a strategic hazard, but also an optical one. Even for legitimate news media, the mini-Shaheen Baghs didn’t produce the right visuals. Each day looked more or less like the next, and each Bagh looked like every other (except for the original one). The continuous sit-in model could inherently not sustain public attention, at least not in way proportionate to the courage and the endurance of the women – of all the freezing nights with only tarp between them and the sky.

The protest imagery was now also dominated by women in niqaab, giving interviews through heavy cloth, faces and even eyes unseen.

To a liberal audience, this was evidence that the protest was giving voice and power to the most marginalised of Indians: the working-class Muslim woman. To other audiences, however, the visuals were troubling and suspicious. Evidence of conservative religiosity was easily painted, by hostile media, as radical Islamism – and thus, a patriotic protest as an ‘anti-national’ threat.

By early February, the anti-NRC movement was losing its visibly diverse character and starting to look exclusively Muslim – precisely what its powerful opponents were waiting for.

The day of vengeance

When campaigning began for the Delhi elections, the BJP, desperate to challenge the buoyant AAP, conjured a dark mirror-image of Shaheen Bagh as a nest of communal treachery, bred by Arvind Kejriwal. Unfortunately for the BJP, the truth prevailed, to the extent of returning AAP a second massive mandate.

But two weeks later, when mini-Shaheen Baghs tried to raise a new challenge – occupying parts of roads in north-east Delhi – there was no shield of diversity to hold off the carnage they were punished with.

Still Shaheen Bagh endured – through threats and atrocities, through the winter turning warm at last, through Holi. What it took to truly justify its end (at least, its physical dispersal) was nothing less than the world-wide reorganisation of social, commercial and economic behaviour – triggered by the Covid-19 pandemic – that was called social distancing.

The new logic of everything, brought about by the coronavirus, swayed the advocates of Shaheen Bagh first. Indians who had been unshakeable in their support of the protests were clear and outspoken about the need of the hour, to wind it up. The women – the only ones to truly understand the scale of their effort so far – made adjustments instead. They reduced their numbers and rearranged the site to meet practical sanitary requirements.

On the morning after their hundredth night, after all the city was under virtual curfew, the police finally came and uprooted the garden.

In those hundred days, Indians have gone from radical gathering to radical distancing – from physically converging as a public and laying claim to their republic to waking up isolated in a world of private boxes insulated from touch.

But the two are not opposite. A spirit of collective action and care, of protecting each other, drives both – the only danger of this enforced isolation is that we will forget, and spend it only thinking about ourselves in isolation. Instead, we can spend our time in private reflecting on and reaffirming that time of public solidarity.

Social distancing does not need to mean the loss of political togetherness, the gift to India from Shaheen Bagh.