Fact Check: Was Amit Shah Right to Say NIA Had No Proof Against Samjhauta Accused?

The home minister skipped a number of important details while justifying the Centre's decision not to the appeal the trial court's verdict. 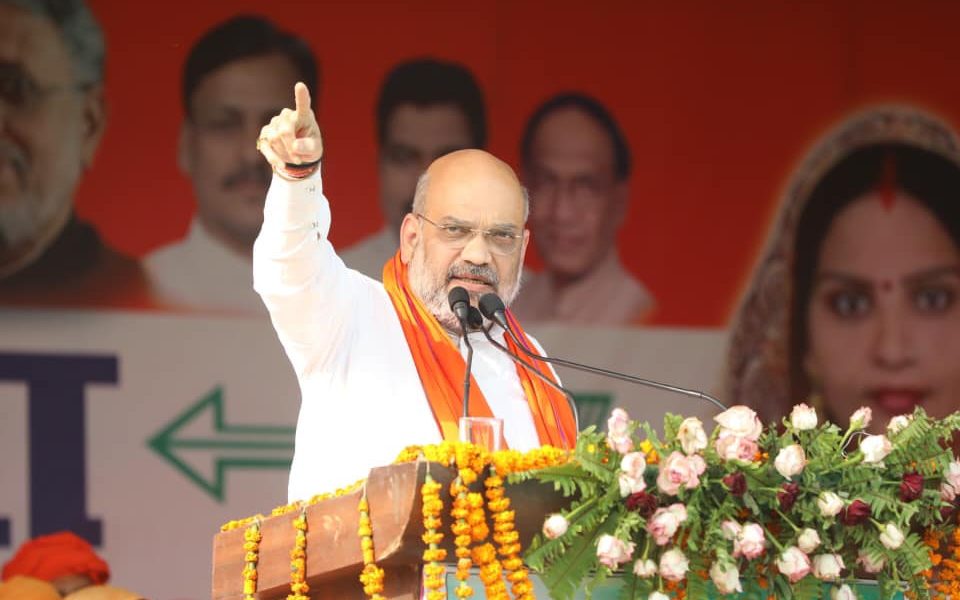 New Delhi: Defending the Union government’s decision not to file an appeal against the recent acquittals in the 2007 Samjhauta Express blast case, home minister Amit Shah claimed on Wednesday that the investigative agencies did not have sufficient proof against the accused persons, and believed that they were falsely apprehended.

Replying to a debate in the Rajya Sabha on the controversial National Investigation Agency (Amendment) Bill which seeks to extend more powers to the NIA, he said linking a series of such blasts in the second half last decade to a particular religion (read Hinduism) was a case of political vendetta by the then UPA government.

He backed his claim by saying that the judge at the trial court noted that two case chargesheets – filed on August 9, 2012 and June 12, 2013 during the UPA regime – produced by the NIA did not have substantial proof. He said that the decision not to file an appeal against the trial court’s decision was taken after consulting the law officer.

Shah said that in the same case, the police had arrested seven people initially but they were let off despite the fact that US agencies also confirmed their role. Subsequently, he alleged, attempts were made to link the blasts with a “particular religion”.

How much of what Shah said is true?

A cursory look at how the case unfolded indicates that the home minister omitted important details while defending the Union government’s decision to not file an appeal against the trial court judgement.

The judgement that acquitted Swami Aseemanand and three others in March 2019 clearly indicts the NIA for not producing the best evidence to back the chargesheet.

A senior police official in the know of the case who did not want to be named told The Wire that the chargesheets Shah mentioned were foolproof. “Both the Haryana police and the NIA had found enough evidence and witnesses to make a strong case against the accused. However, the NIA did not pursue the case strongly at the court. Government witnesses were made to resign. The agency could not produce multiple witnesses it had investigated at the court,” he said.

“It appeared that the agency had lost interest in the case ever since the new government (NDA) came to power in 2014,” he said.

Also read: You May Think You Are an Indian Citizen, but Can You Convince the State?

The police official’s signalling that the Samjhauta blasts case suffered because of a lack of political will from the Modi government may not be off the mark, if certain developments are considered.

It was indeed the case that seven persons were arrested initially, as the home minister claimed. The Haryana police and the Centre had begun to probe the role of Pakistan-based Islamist terror group Lashkar-e-Tayyaba and organisations like the Students’s Islamic Movement of India (SIMI) in the blasts at first. But this was soon ruled out.

Soon after the 2007 bombing of the Delhi-Lahore Samjhauta Express occurred, the Haryana police formed a Special Investigation Team to probe the case. Heading the SIT from 2007 to early 2010, IPS officer Vikash Narain Rai trailed the “incendiary device” of the unexploded bomb recovered from the train to Indore-based Hindutva activists.

Speaking to The Wire, Rai in the year 2016 had said that the all the components of the unexploded bomb recovered from the train were purchased by people linked to the Rashtriya Swayamsevak Sangh and its associate groups.

Rai said the evidence trail took the SIT to Indore, where RSS member Sunil Joshi and his two accomplices were found to be complicit in the crime. But Joshi was mysteriously murdered before the police team could nab him.

“When we dismantled this (incendiary) device, we started searching for the origin of all the items (present in the bomb). We got in touch with the manufacturers of each part of the device. We contacted the stockers. We looked for retailers. It was an all-India search. Ultimately, we reached Indore. There, we could locate the market from where the suitcase was picked up. I remember the name of the store. It was called Raghunandan Ataichi store owned by a Bora Muslim. The shop’s salesmen – one Hindu and one Muslim – conceded that two young people had come (to buy the suitcase). These two people were speaking the Indori dialect of Hindi. (After thorough investigation), they confided in us and told us they were pretty sure that the two people were Hindus and not Muslims,” Rai, a 1977 batch Indian Police Service officer, who retired in December 2012, had said.

The team further investigated the matter, as the salesmen’s version could not be seen as conclusive evidence.

“After they assisted us in making sketches, we started to look for these people. But the major development in the case came when we found that each and every item of the bomb was bought from Indore, and within a one kilometre radius of the suitcase store. It was established that the whole bomb was assembled there,” said Rai.

He further said that two of Joshi’s accomplices, Sandeep Dange and Ramachandra Kalsangra, are absconding even now.

Also read: Samjhauta Express Bombing: With a Prosecutor Like the NIA, Who Needs Defence?

Rai said that the Ministry of Home Affairs (under the then Congress-led UPA), the police and the Central Bureau of Investigation were all surprised to discover Hindutva groups as possible links in the case, since there was no previous instance of their association with such crimes. “The MHA [under the then Congress-led United Progressive Alliance] used to have joint meetings [with us and the CBI] to monitor the progress of a number of terror cases. I have attended a few. They [the officials] were looking forward to a Pakistan angle.”

But as similar evidence, like same modus operandi and devices, against Hindutva groups were found in the Mecca Masjid blasts (2007), the Ajmer Shareef explosions (2007) and the Malegaon blasts (2006), Rai said, the Haryana police SIT felt that its investigation in the Samjhauta blasts case was not off the mark.

Since the SIT was unable to make a headway beyond this point, the case was transferred to the NIA in July 2010, who went on to file the final chargesheets in the case, explaining the alleged role of Hindutva groups.

Did the NIA lose interest in the case after 2014?

The way the NIA went about pursuing the case indicates that there may have been external pressure to go slow on terror cases which implicated Hindutva groups. That senior BJP leaders have often vociferously attacked the idea of “Hindutva terror” and have attempted to paint it as an attack on Hinduism itself leaves much to doubt.

In the year 2015, Rohini Salian, the former prosecutor in the Malegaon blasts case, spoke revealingly about how Suhas Warke, then a superintendent of police in the NIA had attempted to force her to “go soft on the Hindutva extremists”.

The way NIA chiefs were appointed in the last five years have also been questioned by many. Some retired bureaucrats had alleged that NIA chief Sharad Kumar’s tenure was extended illegally to divert attention from the role of Hindutva extremists in a series of such explosions between 2006 to 2008. Kumar, a 1979-batch Haryana cadre IPS officer who took over as NIA chief in April 2014, was set to retire in October 2015. However, his tenure was unprecedentedly extended on grounds that he was well-versed in high-profile cases, most importantly the Malegaon and Samjhauta blast cases, which he had been supervising directly.

Kumar is seen as close to both Prime Minister Narendra Modi and home minister Amit Shah.

Similarly, his successor Y.C. Modi’s appointment as the NIA chief in September 2017 was also mired in controversy. Modi had probed the high-profile assassination of former Gujarat home minister Haren Pandya in 2003 and was pulled up by the courts for his ineptitude. The court had termed the investigation under Y.C. Modi as “botched up and blinkered” which left “a lot to be desired”.

As so many controversial developments surrounded the case, Swami Aseemanand, the primary accused in these cases, confessed to the police that Hindutva right-wing extremists were responsible for the Malegaon, Ajmer Sharif, Samjhauta Express and Mecca Masjid blasts. Aseemanand also confessed to his crime in front of a reporter working with The Caravan magazine.

Against such a controversial backdrop, the senior police official said, the Union home minister has no reason not to let the NIA pursue the Samjhauta blast case further. “He may believe that Samjhauta Blasts case against Hindutva terror was politically-motivated but what stops him from letting the NIA reinvestigate the case.”

“The Criminal Procedure Code of Indian Penal Code stipulates ample provisions for an agency to file an additional affidavit in the case. If the government truly believes that the case was politically motivated, then the NIA could have filed an additional affidavit seeking a fresh probe. This could have saved the court’s time as in that case a trial against the Hindutva activists who were recently acquitted could have been stopped,” he said.

Shah’s logic gives rise to a number of questions. For instance, is it right for the home minister to equate Hindutva terror with an attack on Hinduism?

There is a postscript in the Samjhauta blast case that Shah refrained from talking out while defending the NIA (Amendment) Bill in parliament.

He is right when he said that relatives of those 68 dead in the blasts which ripped apart two compartments of the train have still not received any justice. But why has he not taken any initiative to let the NIA reinvestigate the case?

He either had no answer, or didn’t think the matter was important enough to consult the law officer, like he did when deciding not to appeal against the trial court’s decision.