The letter urged the Facebook CEO to not let business prospects in the future deter the implementation of its policy against hate speech, noting that this could lead to hate crimes.

New Delhi: A group of former civil servants has penned an open letter to Facebook CEO Mark Zuckerberg expressing concern over recent reports that the social media giant had failed to take action against a BJP leader for hate speech.

On August 14, The Wall Street Journal reported that Facebook India opposed applying its hate speech rules to the BJP’s T. Raja Singh at the behest of Ankhi Das, who is Facebook’s top public policy executive in India.

In its letter, the Constitutional Conduct, a civil society group made up of retired civil servants, noted that it was “impartial and committed” to the Indian constitution and was writing to a “non-Indian body” for the first time to register its disapproval against Facebook’s alleged action over hate speech.

Pointing out that hate speech threatens to adversely affect democratic rights, the letter highlighted that Facebook defined hate speech as a direct attack on people for characteristics such as race, ethnicity, national origin, religious affiliation, sexual orientation, etc. The group further pointed out that Facebook’s inaction against T. Raja Singh and others for their “derogatory comments” against people belonging to a different religion and accusing Muslims of spreading COVID-19 was in contravention on its own policy.

The signatories also held that they were dismayed to learn that public policy head of Facebook India had consciously opposed applying Facebook’s hate speech rules to members of the ruling BJP for fear of jeopardising the company’s business prospects in India.

The letter also called attention to the rise in religious unrest across the nation in light of the recently enacted Citizenship Amendment Act, the proposed National Registry of Citizens, the communal riots that took place in February 2020 in the national capital and surge in ‘cow vigilantism’ and instances of lynching of members of the minority community. “Many of these crimes have been instigated through hate speech spread through various communication channels, such as Facebook, WhatsApp, and Twitter,” the signatories said and added that, despite being aware of it, Facebook had failed to implement its policy to curb hate speech in a non-partisan manner.

Noting that such behaviour on the part of Facebook had become a subject of debate in other countries as well, the group of retired civil servants noted that to “blame the algorithms of artificial intelligence is both to evade corporate responsibility and to deny the human agency involved in the framing of those very algorithms”.

The entire text of the letter has been reproduced below.

We are a group of former civil servants of India belonging to the All India and Central Services, who have worked, in the course of our careers, with the Central Government as well as different State Governments of India. As a group, we have no affiliation with any political party but believe in being neutral, impartial and committed to the Indian Constitution. We have, in the past, written to the government and government institutions whenever we felt that the democratic rights of Indian citizens were being violated. We have not, so far, written to any non-Indian body. We are writing to you now, in a departure from our usual practice, because certain actions (or the absence of certain actions) by Facebook in their operations in India have thrown into danger some of the fundamental rights of the people of India. Our attention has been drawn to this by an article in the Wall Street Journal (WSJ) dated August 14th, 2020.

Most democratic countries assure their citizens of several basic rights and freedoms. Both the United States, the country of which you are a citizen, and India, do the same. Democratic rights can be adversely affected by hate speech, as you very well know. Which is why Facebook has made it part of its policy not to allow hate speech. Facebook defines hate speech as a direct attack on people for characteristics such as “race, ethnicity, national origin, religious affiliation, sexual orientation, sex, gender or gender identity and serious disabilities or diseases .”

Given this clear definition in your own policy, we are surprised that Facebook did not take action against some clear and serial offenders in India – persons like T. Raja Singh and a few others – for their derogatory comments against people belonging to a different religion, accusing Muslims of spreading Covid 19, indulging in ’love jehad’ and various other misdemeanours. What is striking about Facebook’s leniency towards these persons is that all of them happen to be members of the political party in power. That Facebook did consider the posts to be offensive is apparent from the fact that these posts were deleted on Aug 17, after the WSJ wrote to Facebook seeking its comments. We are dismayed to learn, again from the WSJ article, that the Public Policy Head of Facebook India consciously opposed applying Facebook’s hate speech rules to members of the ruling Bharatiya Janata Party (BJP) because doing so would adversely affect the company’s business prospects in India.

Mr Zuckerberg, you surely cannot be unaware that religious unrest has become a serious problem in India. The recently passed Citizenship Amendment Act (CAA), coupled with the proposed National Registry of Citizens (NRC), threatens to take away the citizenship of hundreds of thousands of Muslims and other minorities in India and put them in detention centres. 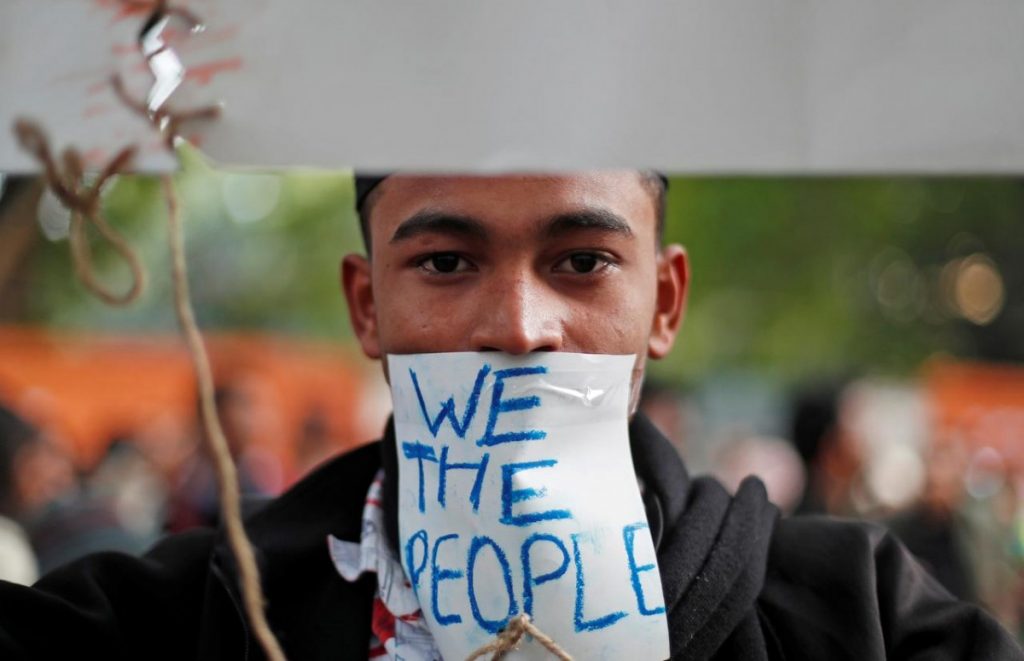 A protester attends a protest against the CAA in New Delhi, India, December 14, 2019. Photo: Reuters/Adnan Abidi

You cannot also be ignorant of the communal riots that took place in Delhi in February 2020, in which 53 persons were killed, two thirds of them Muslims. Several cases of lynching and torture, primarily of Muslims and Dalits (oppressed castes and groups), have also occurred in India in recent years. The majority of these are related to ‘cow vigilantism’, i.e. religious extremists resorting to violence in apparent efforts to protect cows from being illegally slaughtered.

Many of these crimes have been instigated through hate speech spread through various communication channels, such as Facebook, WhatsApp, and Twitter. Despite being aware of this, Facebook has failed to implement its own policy of discouraging hate speech in India, or has implemented it in a clearly partisan manner. That this seems to have been done to protect Facebook’s commercial interests is even more reprehensible.

We note that such behaviour on Facebook’s part has become a subject of debate in other countries as well. Commercial interests at the cost of human lives? If these are the crass calculations Facebook indulges in, it is no surprise that the calculus of hate is spreading like a virus in many parts of the world. To blame the algorithms of artificial intelligence is both to evade corporate responsibility and to deny the human agency involved in the framing of those very algorithms.

We are writing to you in the expectation that you will make serious efforts to audit the implementation of Facebook’s hate speech policy in India and, while such an audit is under way, ensure that the present Public Policy Head of Facebook, India, is not in a position to influence the investigations. We also fervently hope that in future, you will not let your company’s business prospects stand in the way of implementing your own policy against hate speech and posts which can lead to hate crimes. This is a sure way of demonising minorities and inflicting violence upon them while undermining the democratic and secular basis of the Indian Constitution.