Eye on 100 Seats in UP Assembly Polls, Will AIMIM Get to Be 'Kingmaker'?

Banking largely on Asaduddin Owaisi's singular fame and with a coalition with a large party still not on the cards, the party appears prepared to tackle the challenges of polls in Uttar Pradesh.

New Delhi: In its second attempt to secure political ground in Uttar Pradesh, the All India Majlis-e-Ittehad-ul-Muslimeen (AIMIM) has declared that it will contest 100 seats in the upcoming assembly polls in 2022.

The party had managed to secure five out of 20 seats it had contested of the 243 assembly seats in the 2020 Bihar elections.

Bahujan Samaj Party (BSP) chief Mayawati, who had formed an alliance with AIMIM in the Bihar assembly elections, categorically denied any possibility of forging an alliance with the party in the upcoming polls.

Mayawati, in her tweet, said these speculations were “baseless” and “an attempt to undermine the BSP”. Aam Aadmi Party has also said that an “alliance with AIMIM” is not acceptable to the party.

‘Muslim youth will rally around Owaisi’

AIMIM has so far only formed an alliance with the Bhagidari Sankalp Morcha, a political front that includes nine small parties, including Om Prakash Rajbhar’s Suheldev Bhartiya Samaj Party (SBSP).

Even though Samajwadi Party spokesperson Abdul Hafeez Gandhi said that AIMIM’s entry into Uttar Pradesh will not dent its Muslim voter base, experts say that AIMIM could eat into the Muslim vote bank of the SP, Congress, and BSP.

Ramesh Dixit, political analyst and former professor of political science at Lucknow University said that Muslims, especially youth, have been “pushed to the corner so much, that they will rally around [Asaduddin] Owaisi’s party”.

“The minorities are being targeted violently and aggressively in the whole country, especially in Uttar Pradesh through lynchings and other religion-based crimes. They are also being socially, economically and physically threatened. The Muslim community wants to just defeat the BJP,” he added. 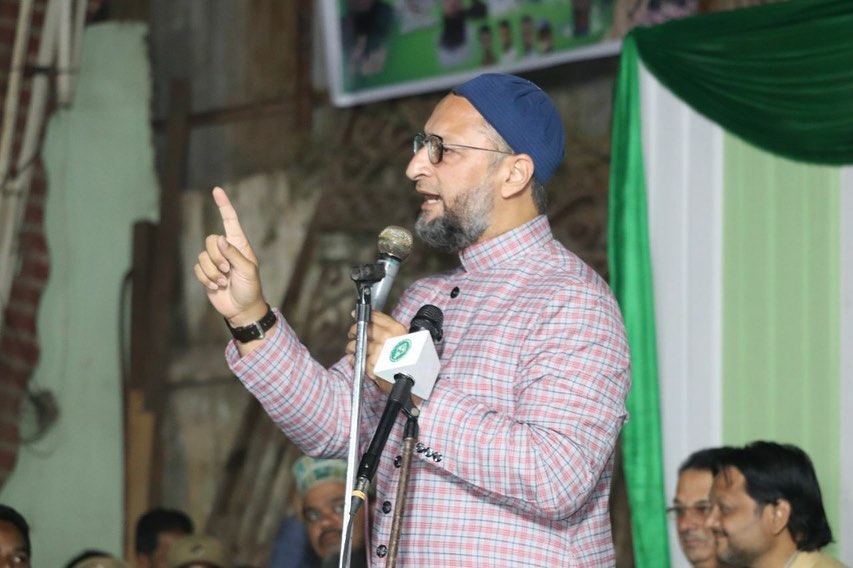 However, he said, this will benefit only the BJP as AIMIM will be “cutting in” on Samajwadi Party’s Muslim votes. “The only ray of hope to defeat BJP in Uttar Pradesh is Akhilesh Yadav. He has a strong support base and dedicated workers…” he adds.

If AIMIM were to dent BJP’s voter base, instead of SP, BSP or Congress, Dixit says, it would have been ideal. “But BJP’s voter base is intact,” he says, adding that the 2022 Uttar Pradesh assembly polls are crucial, for they will decide the course of the next Lok Sabha elections in 2024.

Need for Muslims to ask for “representation”

But AIMIM’s Asim Waqar knows this. While speaking to this correspondent on June 26, he said, “This crucial election will decide the course of the 2024 Lok Sabha election to elect a Central government.”

“I also understand that Muslims, who form about 20% of the population in Uttar Pradesh, are an important part of polls. The need for Muslims to rise up and ask for representation instead of being used as a vote bank hence becomes more important during such a time,” he said.

In a video byte, Waqar also said that his party will not shy away from pre-poll alliances. But AIMIM has not reached out to any political party, including the BSP so far for an alliance, Waqar told The Wire.

On June 28, a day after AIMIM chief Asaduddin Owaisi had declared that his party will contest hundred seats in Uttar Pradesh, Waqar in a video byte sent to reporters, asserted that the party will go it alone if needed. “This vote cutter tag has become old now. How many times will you shoot with the same arrow?” he asked.

Instead of taking the initiative to form alliances, the AIMIM has targeted the Samajwadi Party over its 2012 promise of reservation in educational institutions, government offices, etc., made to Muslims. AIMIM has accused the SP of duping its Muslim voters and making “false” promises to them.

Are SP and BSP possibly worried that they may lose their Muslim votes in the future if the AIMIM manages to secure a base in Uttar Pradesh through an alliance? Or, have mainstream parties distanced themselves from AIMIM because they are afraid to upset its non-Muslim voters, who might then gravitate towards the BJP?

Samajwadi Party’s Abdul Hafeez Gandhi, however, said that the Muslim voters are “well aware” and hence will not fall into the “trap of the MIM,” and there is no question of their vote base deterring.

Gandhi said that every political party has a “constitutional right” to contest elections. “MIM too has this right but it can’t force other political parties to enter into an alliance with it. The Samajwadi Party has decided to go alone in UP with the only exception of having alliances with locally-active political formations,” he told The Wire.

Gandhi further said that AIMIM in UP has no organisational strength which will deter people from voting for the party. “Before deciding to enter the electoral fray in any state, MIM must assess its organisational capacity. Under these circumstances, voters in UP would not trust MIM. The majority of anti-BJP votes would go to the Samajwadi Party as it is the only credible option for the voters of UP.”

Senior journalist Hemant Tiwari said that despite having “no organisational structure” in Uttar Pradesh, AIMIM head Asaduddin Owaisi’s image and fame will play an important role in the upcoming polls. “I have personally seen a good response to Owaisi’s rallies in the state,” he told The Wire. “But whether it will translate into votes is something that we will only find out when polls are closer.”

But AIMIM’s Asim Waqar said that the hundred seats which have been selected are those areas where the party has been working aggressively for the past five years. After failing to make a mark in the 2017 UP assembly polls, the AIMIM has decided to contest again next year because it has “actively worked” since then, according to its members.

“We will slowly reveal the seats we will be contesting on,” Waqar told The Wire.

In 2017, with only close to two lakh votes from a total of 38 seats the party had contested, 34 candidates lost their deposits.

But with the rise of “oppression” of the Muslim community in India, Waqar said, the community is looking for a change. He justified focusing mainly on Muslim votes by saying, “Politicians have a role to empower those who are needy.” However, he added that the party is also working towards Dalit rights.

Main contest between SP and BJP

Tiwari further said that AIMIM’s entry into Uttar Pradesh could be a potential danger to the opposition, especially the Samajwadi Party. “The BSP has lost the faith of Muslims in Uttar Pradesh by echoing the BJP. Muslims no longer trust the integrity of BSP’s Mayawati. Congress doesn’t have many strong Muslim faces. That leaves Muslims with SP, where they would have voted in huge numbers,” he said.

But it could go either way for the AIMIM, he said. “If AIMIM selects its candidates carefully, then it could work in their favour, otherwise there will not be any substantial dent into SP’s vote base,” he felt. Some Muslims also believe that voting for AIMIM will benefit the BJP, he said.

In an ideal situation, Tiwari added that AIMIM should be taken into the Samajwadi Party fold.

“Samajwadi Party is allying with smaller parties with the purpose of defeating the BJP. The AIMIM should be taken in this fold, with a certain number of seats given to them, because the fight primarily is between the SP and BJP this time. All others are small players,” he said.

Will emerge as “kingmaker”: AIMIM

Samajwadi Party’s Gandhi, while speaking to The Wire, asked, “I would like to pose a question to AIMIM, why has it not been able to make a deputy CM in Telangana, where AIMIM is the alliance partner?”

Further, he said, “AIMIM is not able to have a deputy CM in a state where it has a considerable political influence and in UP it promises deputy CM, which is surprising, as in UP it is not in a position to win even a single seat…”

But will AIMIM be able to secure its dream of becoming the kingmaker in the UP 2022 polls without support from non-Muslim voters?

Ramesh Dixit said that any party needs sizeable support from at least two communities to be able to become a kingmaker. “Winning combinations can only be made with the support of two to three different groups,” he said. The Congress, he said, might be in a better position to dent BJP’s voter bank because it is trying to win over a section of Dalits, Brahmins and also Muslims.

But Asim Waqar said that AIMIM will stand strong against any tags. “We will demand representation from those who make false promises to Muslims. They can call us BJP agents all they want, but we will not back down from fighting for the rights of Muslims,” he noted, continuing to attack the Samajwadi Party over its promise to Muslims for reservation.

In 2012, 68 Muslim MLAs were elected in Uttar Pradesh – an all-time high. But the number of Muslim MLAs in the state drastically reduced to less than 25 in the 2017 assembly polls that the BJP won with an overwhelming majority.

After Samajwadi Party’s Akhilesh Yadav became the chief minister of Uttar Pradesh in 2012, he had, in his manifesto, said that he will introduce reservations for minority community students in medical education, but the promise did not turn into reality.

The party had also promised special provisions for the recruitment of Muslims in government security forces through camps among other things, but no such camps came into being during the government.

“If the SP takes votes from Muslims on the basis of these false promises but doesn’t deliver on them, what is the difference between SP and BJP?” Waqar asked.