Explainer: Why the Presidential Election May Not Be Smooth Sailing for BJP

The loss of seats in Uttar Pradesh, compared to the last presidential election, and the loss of allies like Shiv Sena and SAD may affect its winning chances. 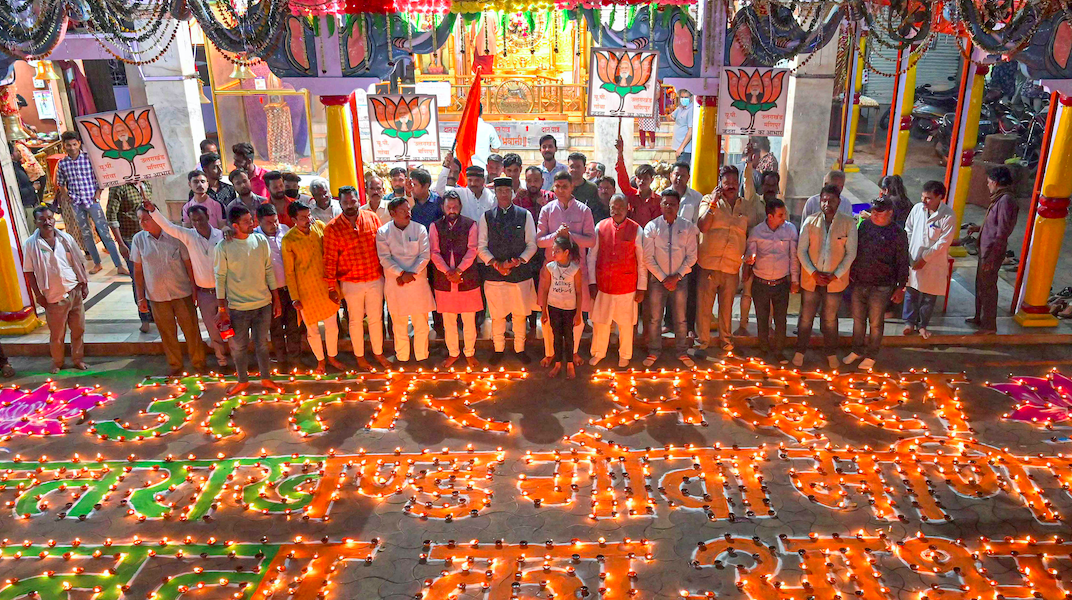 New Delhi: Despite getting a complete majority in Uttar Pradesh and Uttarakhand and appearing set to form governments in Goa and Manipur following the recent assembly elections, it may not be all smooth sailing for the Bharatiya Janata Party in the upcoming presidential election.

Given its overall strength in Rajya Sabha, it might have it easier in the vice-president’s election, in which only MPs vote.

In the mean time, BJP’s equations with its allies have changed.

Also read: BJP’s 2024 Ambitions Are on Track – But AAP Might Show Opposition the Way

This would be crucial going ahead since the votes of the legislators from Uttar Pradesh carry the highest value in the presidential polls. Due to the large population of the state, each vote carries a value of 208.

With the presidential election taking place through an electoral college that comprises all the 543 Lok Sabha MPs, 233 Rajya Sabha MPs as well as 4,120 MLAs, the differential value of votes of legislators from different states usually makes a significant difference. As for MPs, the value of their vote remains 708 each, across states.

The other states which went to the polls recently were Uttarakhand, Goa, Manipur and Punjab. Of these, the vote value for an MLA in Punjab is 118, for Uttarakhand it is 64, for Goa 20 and for Manipur, 18.

In the case of Punjab, BJP neither gains nor loses since it continues to have two seats.

Win some, lose some

BJP has also lost allies or its allies have not performed as well as they did in the past.

In the case of Punjab, which has a total vote value of 13,572, the BJP’s alliance with Shiromani Akali Dal (Badal) broke in the wake of the farmers’ agitation.

Likewise, in Maharashtra – which has a high vote value of 50,400 and where the Shiv Sena had assisted it in winning the presidential election in 2017 – it is no longer in alliance with the party.

Overall, the NDA had won 5.27 lakh votes in the presidential election in 2017 along with these allies. But it had also garnered another 1.33 lakh votes with the help of other parties like K. Chandrashekar Rao’s Telangana Rashtra Samithi, Naveen Patnaik’s Biju Janata Dal and Jagan Reddy’s YSR Congress.

This time, none of these parties have announced tie-ups with BJP for the presidential polls yet.

AAP’s rise may go against BJP

Another factor playing out is that Aam Aadmi Party has swept Punjab and while it would have a greater say in the presidential polls, its vote is unlikely to go in favour of the BJP, as it is posturing itself as the natural and national alternative to the Congress to take on the saffron party.

With over 70 Rajya Sabha seats due to fall vacant between April and August this year, the outcome of the recently-concluded assembly elections will have a definite impact on the election to these as well. Of the seats that would fall vacant, 11 are in Uttar Pradesh and one in Uttarakhand. In these, the BJP would expect to do well.

On the other hand, AAP will hold the sway when it comes to the elections to the seven Rajya Sabha seats in Punjab, where it has won a comprehensive majority of 92 out of 117 seats. The party is likely to win six of these seats, taking its total tally in Rajya Sabha up to nine from three at present. Of the seven seats due to fall vacant in Punjab, elections have already been announced for five.

These RS seats would go for elections as the terms of five members are coming to an end. These MPs are Partap Singh Bajwa and Samsher Singh Dullo (both Congress), Sukhdev Singh Dhindsa and Naresh Gujral (both Akali Dal) and Shwait Malik (BJP).

With two more members – Balwinder Singh Bhunder (Akali Dal) and Ambika Soni (Congress) – due to complete their tenure in July, the state will see elections to seven seats in all over the next few months.

Saffron party may do well in vice-presidential election

But while the presidential polls can prove to be a hiccup for the BJP, it is expected to do better in the election for the post of Vice-President due in August. Since only MPs can vote in these elections and the value of each vote – including that of Rajya Sabha MPs – is one, the increase in Rajya Sabha numbers will come in handy for the BJP.

This increase in strength is also expected to help the saffron party press ahead with the legislative business.

Overall, a total of 75 MPs, including seven who are nominated, would be completing their tenure in the Rajya Sabha this calendar year. Of these, 73 seats will be filled before the presidential election and 66 of these 73 MPs will cast their votes in the Presidential poll. In the states of Uttar Pradesh, Punjab and Uttarakhand which went to polls recently, 19 Rajya Sabha seats are due to fall vacant before the presidential election.

Of the seats that would fall vacant, 13 – including five of Punjab – are due to fall vacant at the end of this month. Twenty will fall vacant in June, 33 in July and 2 in August. This apart, two other seats – one each from Bihar and Karnataka – are already vacant.

BJP will be hoping to gain seats in Himachal Pradesh where Congress member Anand Sharma is retiring; Assam where Ripun Bora and Ranee Narah of Congress would be completing their term; and Tripura, where Jharna Das Baidya of CPI(M) is retiring next month.