Explainer: Why the Nagaland-Manipur Arterial Highway Had Been Closed for 10 Days

While the Manipur government is interacting only with the Nagaland government to resolve the matter, the Angami Nagas blocking the highway argue that states must stay away as it is a dispute between two communities over traditional land. 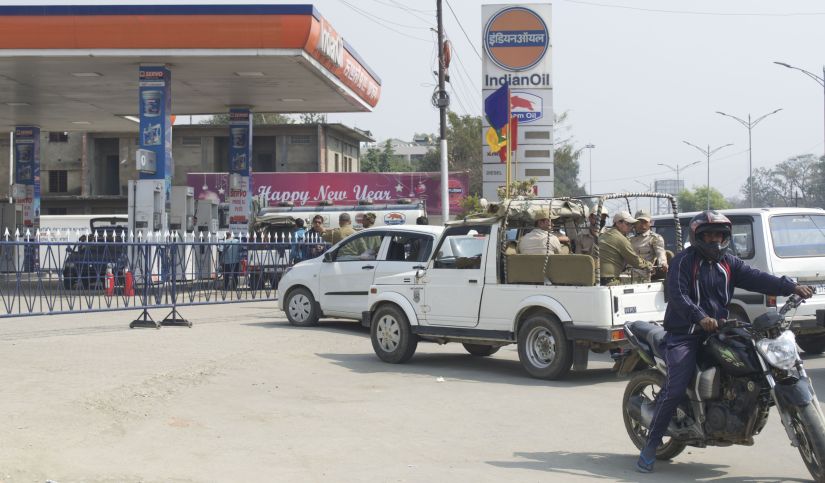 Vehicles line outside a fuel filling station in Imphal during the economic blockade in February 2017. Photo: Amanat Khullar/Files

New Delhi: On January 22 – in the run-up to the Manipur assembly elections – Union home minister and top Bharatiya Janata Party (BJP) leader Amit Shah boasted of good governance delivered by the N. Biren Singh regime in the northeastern state. He particularly highlighted that unlike during the Congress governments, Manipuris had not seen any blockade of highways “in the last five years” under his party’s rule.

On March 21, just days after the Biren Singh government returned to power after the BJP crossed, for the first time, the simple majority mark of 31 seats in the recent assembly elections, an economic blockade has returned to haunt Manipur.

For ten days in a row now, arterial highway number 39 (now rechristened as NH2) that runs from Assam to Manipur through Nagaland had been under siege by an influential Naga civil society outfit, Southern Angami Public Organisation (SAPO).

On March 31 afternoon, SAPO has declared through a press statement that it has decided to “temporarily suspend” the indefinite bandh and is lifting the blockade immediately. It has stated that the decision was taken based on Tenyimi People’s Organisation’s (TPO’s) “ultimatum” to the Manipur government to withdraw the forces from Kezoltsa and also on the request of Angami Public Organisation as it is all set to celebrate 50 years this April 8. It said if the Manipur government fails to withdraw the forces soon, the state government would be “held responsible” for any action SAPO takes.

This highway has been notorious for economic blockades, mainly between Manipur and Nagaland. In a matter of days, they can typically scale up to such an extent as to create a crisis of essential goods in Manipur. The blockade is essentially a pressure tactic used by Nagaland-based groups to settle a dispute or two with Manipur by taking advantage of the land-locked state. In the absence of the option of using NH 39 to procure goods, Manipur has to then depend only on the NH 37 that enters the border state at Jiribam from Assam’s Barak valley.

Close to the 2017 assembly polls, NH39 remained shut for months together due to a blockade by the powerful United Naga Council (UNC), kicking up an acute crisis of fuel and other essential goods across Manipur. That UNC blockade against the then Okram Ibobi Singh government of Manipur was declared against the decision to re-demarcate a few Naga-dominated districts in that state. The BJP, up against the Congress government in Manipur during the election season, had successfully made it a poll issue, promising that under its rule there would never be an economic blockade in Manipur.

The latest blockade, though, has shown that the BJP government is not immune to the problem.

SAPO’s March 21 announcement of the blockade was initially for 72 hours, and later turned into an indefinite road block as it didn’t receive any “response” from the Manipur government. Since the closure of the highway had already led to escalating fuel prices in Manipur, with some filling stations running dry too, as well as passenger services to Imphal being partially affected, a peeved All Assam Manipuri Youth Association, from March 27 midnight onwards, announced a counter blockade on the same highway – between Nagaland and Assam – to snap the supply of essential goods to the Naga areas too. They stated that the bandh would continue till SAPO stuck to its blockade.

This move further escalated the conflict, making SAPO state that it would not budge till the Manipur government relented to their demand.

SAPO had called for the blockade against the Biren government’s recent decision to build a permanent outpost at Kezoltsa, a forested belt situated on the Manipur-Nagaland border. It demanded that the Biren government removes its forces from the “so-called disputed” area.

SAPO represents the Angami Nagas residing along the Manipur-Nagaland border. The Angamis claim Kezoltsa as their ancestral community land while the Mao Nagas and the Maram Nagas, living on the Manipur side, too stake a right over Kezoltsa.

The disputed area is located on the edge of the scenic Dzukou valley that traverses Nagaland and Manipur’s boundaries. The valley has been a reason for confrontation between the Mao and the Angami Nagas for quite a while. While the Mao Nagas claim it to be their community land and say is not part of the Nagaland’s Dzukou valley, the Angamis claim that the British, during the colonial era, arbitrarily divided villages and clan land and gave away that portion to Manipur without consulting their tribal heads.

The Mao Nagas are a major tribe in Manipur whose community land borders that of the Angamis and the Chakesang Nagas in the state of Nagaland. The demand for Kezoltsa between the two factions had begun to firm up particularly in the 1970s and gained prominence in the mid-1980s. In the ’80s, the issue had escalated after the Manipur government with representatives from the Mao Naga community stepped into the valley, leading the Angamis to launch a protest. Though the situation was brought under control then, in 2015, it scaled up once again.

The apex body of the Mao Nagas, the Mao Council, had then accused the Angamis of encroaching on their land inside the state of Manipur. It resulted in an economic blockade by the Mao tribe then. The Angamis too announced a counter blockade on the same highway.

The matter reached the common apex body of ten Naga tribes which includes the Angamis and the Maos – the Tenyimia Peoples’ Organisation (TPO). These tribes consider themselves to be part of the Teniyimia bloc with common ancestry. They speak Tenyidie language, declared ‘endangered’ by the UNESCO in 2021.

As per an Indian Express report, the apex body of these tribes, the TPO, took the matter to the customary court, leading to an understanding between the tribes in 2017 to maintain status quo.

SAPO had represented the Angami Nagas in that court case. It signed an “Arbitration Undertaking” to solve the matter through traditional means with the Mao Council and the apex body of the Marams, the Maram Khullen.

SAPO now accuses the Manipur government of violating that arbitration undertaking reached between the three Naga tribes. SAPO president Kevipodi Sophie told The Wire, “The dispute is between communities and not the Manipur government and it should, therefore, stay away from it.” The Express report quoted TPO secretary Vipopal Kintso as saying that it had written three times to the Manipur government since the understanding was reached among the tribes as per Naga traditional laws and asked it not to interfere in the matter. “This has been disregarded (by the Manipur government), that is why SAPO was compelled to call  the bandh,” he said. He also added, “Since this is tribal land, and not cadastral land, the state government cannot take up any activities here, without prior approval from original land owners.”

Sophie told this correspondent from Kigwema, “The bandh (on the highway) can be lifted anytime provided the Manipur government withdraws its security personnel from the so-called disputed area.”

On March 27,  speaking at the assembly, the Manipur chief minister said the matter would be resolved at the “state level” amicably and his government’s special secretary (home) has already sent a letter to the Nagaland state government. As per media reports, Biren said that the claim that the entire Dzukou Valley belongs to Nagaland has been made by SAPO, not the Nagaland state government and if the matter needed any further intervention, the Union government would be roped in too.

Sophie has confirmed to The Wire that the Nagaland government has reached out to SAPO to resolve the matter but added, “We are not satisfied with the request.”

So, the stalemate continues as of March 31.

What this latest blockade throws up is an interesting question: whether a boundary dispute between two northeastern states should be sorted only by the respective state authorities, or by the groups alone whose community land are at stake. In this aspect, the March 21 blockade has seen an unusual intervention. It is by North East Indigenous People’s Forum (NEIPF), a pan North East civil society organisation founded in 2017. On March 30, a delegation of NEIPF members along with its Nagaland chapter delegates assembled at the main area where the blockade is taking place, Kigwema, to meet SAPO leaders, village elders and other Angami Naga civil society groups to make an appeal to them to lift the blockade. 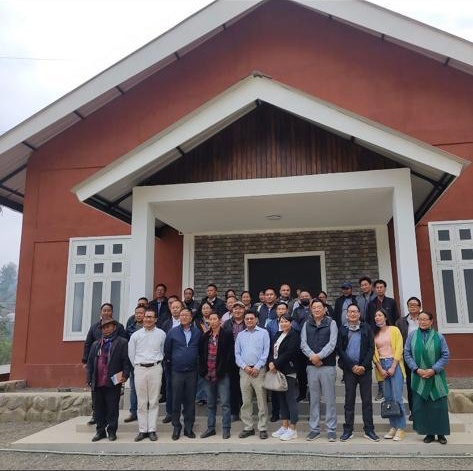 NEIPF spokesperson M. Ibungochoubi told The Wire after the meeting that their fervent appeal to SAPO and others was “based on six points”, all hinged on socio-cultural and socio-economic interdependence of communities of the region. “Our fervent appeal was also on the basis that our communities in the Northeast are spread across remote and tough geographical terrain which has made every road a lifeline for survival and livelihood of all indigenous people of the region. So we should not block any road as a form of protest.”

Importantly, in January, NEIPF had planned a two-day conclave of representatives of various communities from across the region at Dimapur to sort out the outstanding border issues between the northeastern states, and how to co-exist in peace and harmony. “But the then Covid restrictions of the Nagaland government came in the way. We had to postpone the conclave to this April end. While we are in the midst of planning the meeting, the latest Nagaland-Manipur issue has cropped up, making us travel to the Angami area to try and intervene for a peaceful solution,” Ibungochoubi said.

In coming times, if the NEIPF intervention in this case, or in any other case of border dispute between the northeastern states that stems from community conflict, can find a peaceful solution, the typical format of the Union government sorting out outstanding matters by engaging only with top officials will acquire a new dimension.

Note: This article was first published on March 31, 2022 at 1:49 pm and updated at 4:10 pm with information on the blockade being lifted.