Explainer: All You Need to Know About Delhi's MCD Elections

As the MCD goes to the polls, The Wire explains what these bodies do and why the elections are important.

Delhi, which is spread over 1,484 square km, has five municipal bodies. As per the government of India, all cities with a population of over ten lakh are required to have a municipal corporation.

The New Delhi area – home to all major government buildings, offices and residential complexes and diplomatic missions – comes under the New Delhi Municipal Council, which comes directly under the Centre. No elections are held to this council and its members are nominated by the Centre in consultation with the state government. But to give it a more representative character, some sitting MLAs are also nominated to the board.

The Delhi Cantonment area is looked after by the Delhi Cantonment Board (DCB), which comes under the Ministry of Defence. The station commander of the army is the ex-officio president of the DCB while an officer of the Indian Defence Estates Service Cadre is the CEO. The board also has eight elected members. In the last elections in 2015, BJP won five of these seats, Congress two and the Aam Aadmi Party one.

Then come the three municipal corporations of east, north and south Delhi. Earlier, these used to report directly to the Centre through the Ministry of Home Affairs (MHA). But in 2009, the Centre had delegated effective control of Delhi Municipal Corporation functions like building by-laws, allocation of central funds and carrying out performance reviews to the city government, while the MHA retained its say over issues such as the dissolution of the MCD and the appointment of commissioners. In 2012, the erstwhile Municipal Corporation of Delhi (MCD) was trifurcated into the East Delhi Municipal Corporation (DMC), North DMC and South DMC. 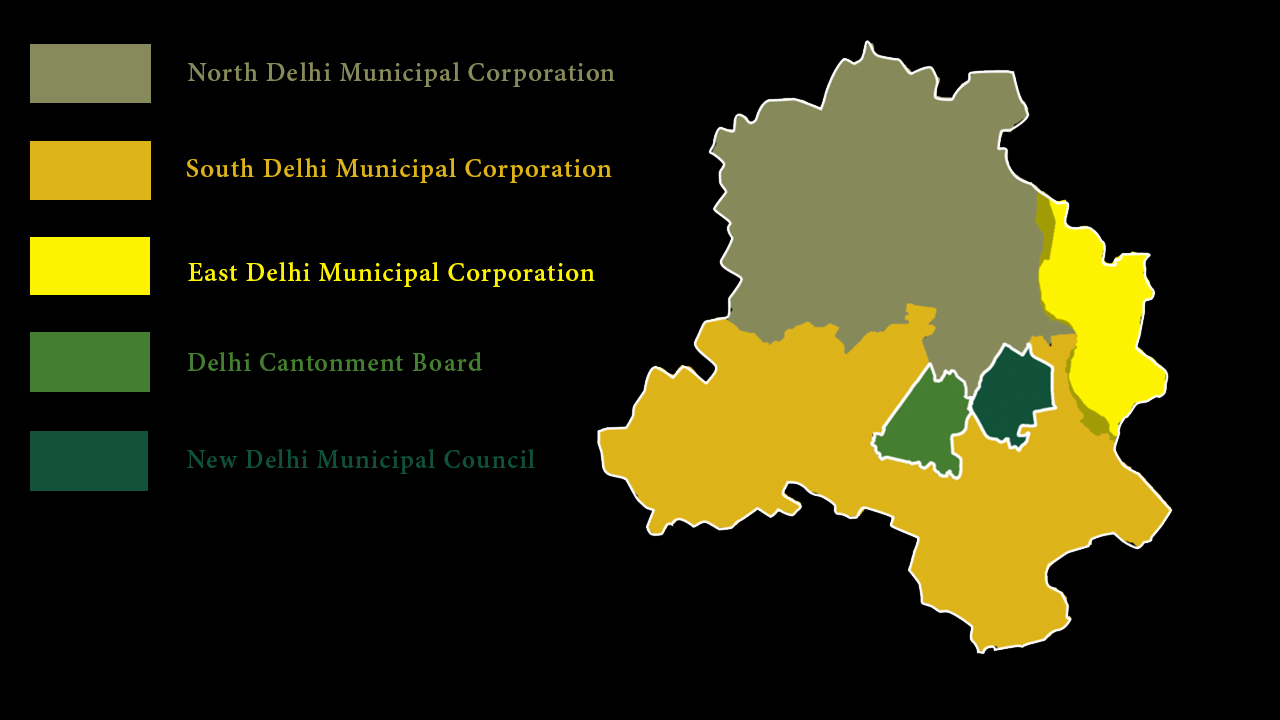 Who goes to the polls on April 23?

Elections are being held for the three DMCs. Collectively, these cover 96% of Delhi’s geographic are and an almost equal percentage of the population.

Multiple authorities: Does it create problems?

Yes, it does. Although the roles of both the Centre and the Delhi government are well defined, politics often interferes in their functioning. This explains why safai karamcharis have gone on strike on five occasions in the last five years over the non-payment of wages.

Prior to its trifurcation, the MCD had 272 wards – four in each of the 68 assembly segments. (The only two assembly areas out of its jurisdiction are New Delhi and Delhi Cantonment.) After the trifurcation, North DMC and South DMC were given 104 wards each while the East DMC covered 64.

Following the trifurcation of the MCD, the BJP returned to power in all the three DMC in 2012. The party had the highest number of seats in all three civic bodies, with a complete majority on its own in North DMC and East DMC, and emerging as the single largest party in South DMC.

What does the MCD do?

The functions of the East, South and North DMCs are primarily the same as those of other corporations across the country. They run hospitals and dispensaries, manage water supply, maintain the drainage system, ensure the upkeep and maintenance of markets, build and maintain parks and parking lots, oversee the construction and maintenance of roads and over-bridges, look after solid-waste management, ensure street lighting, run primary schools, recover property and professional taxes, operate the toll tax collection system, run cremation grounds and maintain the birth and death records of the area.

Yes, they do. The MCD and Delhi government construct and maintain roads and clean drains, for instance. The difference – most roads over 60 feet wide are under the Delhi government, the narrower ones are with the MCD.

Similarly, when it comes to licensing, while the Delhi government provides licences to larger motorised vehicles, the MCD deals with cycle-rickshaws, hand-pulled carts and the like.

When it comes to education, while the DMCs run primary schools, the Delhi government provides higher schooling, colleges and professional education.

In the health sector, the DMCs runs dispensaries and some hospitals, while the Delhi government runs bigger and more specialised hospitals.

In the collection of taxes too the roles differ – while DMCs collect toll tax at the borders, advertisement revenue and property tax, the Delhi government collects excise duty, service tax and value added tax on the services and commodities sold.

The New Delhi Municipal Council and the Delhi Cantonment Board perform similar roles in the areas of their jurisdiction.

Money: Where do the DMCs get funds from?

The DMCs raise their own revenue through various activities and taxes. They also receive grants from the Delhi government and the Centre.

Property tax remains a major source of revenue for the DMCs. Out of their total revenue of Rs 8,351 crore in 2016, property tax had accounted for Rs 1,371 crore – out of which the south corporation had earned Rs 775 crore, north Rs 404 crore and east Rs 192 crore.

Why do the DMCs run huge losses?

Opposition parties claim this is due to the under-recovery of taxes. They note that last year, the deficit of the North, South and East DMCs stood at Rs 3,651.6 crore. For its part, the Delhi government allocated Rs 6,909 crore to the local bodies in this Budget. But despite their growing losses, the three corporations have seen their budgetary grant from the Delhi government decline from Rs 1,881.3 crore in 2013-14 to Rs 1,581.1 crore in 2015-16.

In the past, the primary political parties – the Congress and the BJP – have often even portrayed these elections to be the quarter finals, indicating that they would next go on to win the assembly elections (or the semi-finals) and then the Lok Sabha elections (or the finals).

Though the trend has never followed this course, having a say in the MCD has always been considered important. The BJP won these elections in 2007, when the Congress was in power at both the Centre and in Delhi, but it was unable to carry on with its winning streak in the following assembly elections in 2008, when Sheila Dikshit returned the Congress to power for a record third time, or the Lok Sabha elections in 2009, when Congress bagged all the seven seats. The BJP has ruled these corporations for 20 of the past 25 years.